With Alberta’s health measures set to be scaled back in two weeks, a Calgary city councillor wants her colleagues to step up to look into what options the City of Calgary has in terms of its own health measures.

Testing and isolation requirements implemented by the province during the COVID-19 pandemic are among the health protocols being lifted on Aug. 16.

“That data is essential. That data is all we have,” University of Calgary developmental biologist Dr. Gosia Gasperowicz said.

Speaking at a fourth-straight day of protests against the public health changes outside McDougall Centre in Calgary, Ward 3 councillor and mayoral candidate Jyoti Gondek said she’d like to see the city take action on COVID-19 data collection and to look at other options.

“We’re not doctors but we are in fact able to understand what the evidence and the data is telling us,” Gondek said.

“To deny the public, and to deny policymakers access to the data is a big mistake.”

In lieu of COVID-19 testing data, Gondek is calling on the city to begin daily updates through Calgary’s emergency management agency to share data through the University of Calgary’s wastewater sample testing.

Read more:
How your sewage could help track coronavirus in your neighbourhood

The sampling and testing of wastewater began in July 2020, and researchers said the samples can detect areas with a rise in COVID-19 cases faster than provincial testing could.

“That data is awesome information — it’s probably the earliest signal that something is going wrong — so we absolutely should use it,” Gasperowicz said. “Because we’ll know not only if something is going bad in Calgary, we’ll know even where it is because you can trace where the wastewater comes from.”

Rally organizer and emergency room physician Dr. Joe Vipond said the wastewater data is helpful with providing broad data, but isn’t able to provide specific data to pinpoint exactly where there are outbreaks of the virus.

If cases continue to rise, Gondek said she will call on Mayor Naheed Nenshi to call an emergency meeting of council to discuss re-establishing some public health measures.

Masks are still required on public transit, in taxis and rideshare vehicles, but those requirements will also be lifted on Aug. 16.

Nenshi said he isn’t recommending bringing back the mask bylaw but would recall council over councillors’ August break to discuss the issue if cases dramatically rise.

“We have the power to continue requesting people to wear masks on transit. We regulate the taxi industry so we have the power to do that,” Nenshi told Global News on Friday. “But if there is a point that I need to recall council from their summer vacation because we have to put back the masking bylaw because we’re looking at an outbreak, I won’t hesitate to do that.”

Other councillors are also in favour of reinstituting some measures, including Ward 7 councillor Druh Farrell, who tweeted that she would would support reinstating the mask bylaw.

“I also support reinstating the mask bylaw,” Ward 9 councillor Gian-Carlo Carra tweeted. “Unfortunately, we will need to wait for the numbers to get worse before we’ll have the political support on (city council) to get it over the line.”

Meanwhile, Ward 13 councillor Diane Colley-Urquhart tweeted that she would be opposed to bringing back the mask bylaw, and added that it wouldn’t be enforcible.

Mayoral candidate and Ward 6 councillor Jeff Davison also took to social media to weigh in on the province’s decision to scale back measures.

“Are we really about to become the first place in the world to abandon test-trace-isolate practices?” Davison tweeted Monday. “Getting the world to take us seriously is hard enough — I worry this policy by the province is about to do us irreparable harm.”

City council is currently on summer break until September.

Duane Bratt, a political scientist at Mount Royal University, said due to the lack of power the city has in terms of health measures,  the Oct. 18 municipal election should be noted when analyzing what council decides to do with health measures.

“When we look at the COVID restrictions that the city has the capacity to do, they can’t be viewed independently of that ongoing election,” he said.

Long COVID: Half of patients hospitalised have at least one symptom two years on – Australian Hospital + Healthcare Bulletin 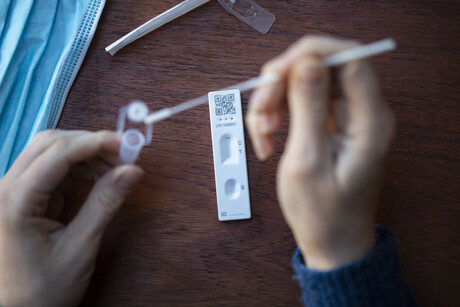 Two years on, half of a group of patients hospitalised with COVID-19 in Wuhan, China, still have at least one lingering symptom, according to a study published in The Lancet Respiratory Medicine. The study followed 1192 participants in Wuhan infected with SARS-CoV-2 during the first phase of the pandemic in 2020.

While physical and mental health generally improved over time, the study found that COVID-19 patients still tend to have poorer health and quality of life than the general population. This is especially the case for participants with long COVID, who typically still have at least one symptom including fatigue, shortness of breath and sleep difficulties two years after initially falling ill.1

The long-term health impacts of COVID-19 have remained largely unknown, as the longest follow-up studies to date have spanned around one year.2 The lack of pre-COVID-19 health status baselines and comparisons with the general population in most studies has also made it difficult to determine how well patients with COVID-19 have recovered.

Lead author Professor Bin Cao, of the China-Japan Friendship Hospital, China, said, “Our findings indicate that for a certain proportion of hospitalised COVID-19 survivors, while they may have cleared the initial infection, more than two years is needed to recover fully from COVID-19. Ongoing follow-up of COVID-19 survivors, particularly those with symptoms of long COVID, is essential to understand the longer course of the illness, as is further exploration of the benefits of rehabilitation programs for recovery. There is a clear need to provide continued support to a significant proportion of people who’ve had COVID-19, and to understand how vaccines, emerging treatments and variants affect long-term health outcomes.”3

The authors of the new study sought to analyse the long-term health outcomes of hospitalised COVID-19 survivors, as well as specific health impacts of long COVID. They evaluated the health of 1192 participants with acute COVID-19 treated at Jin Yin-tan Hospital in Wuhan, China, between 7 January and 29 May 2020, at six months, 12 months and two years.

Assessments involved a six-minute walking test, laboratory tests and questionnaires on symptoms, mental health, health-related quality of life, if they had returned to work and healthcare use after discharge. The negative effects of long COVID on quality of life, exercise capacity, mental health and healthcare use were determined by comparing participants with and without long COVID symptoms. Health outcomes at two years were determined using an age-, sex- and comorbidities-matched control group of people in the general population with no history of COVID-19 infection.

Two years after initially falling ill, patients with COVID-19 are generally in poorer health than the general population, with 31% reporting fatigue or muscle weakness and 31% reporting sleep difficulties. The proportion of non-COVID-19 participants reporting these symptoms was 5% and 14%, respectively.

COVID-19 patients were also more likely to report a number of other symptoms including joint pain, palpitations, dizziness and headaches. In quality of life questionnaires, COVID-19 patients also more often reported pain or discomfort (23%) and anxiety or depression (12%) than non-COVID-19 participants (5% and 5%, respectively).

The authors acknowledged limitations to their study, such as moderate response rate; slightly increased proportion of participants who received oxygen; it was a single centre study from early in the pandemic.

Although conversion therapy has now been outlawed in Canada, many are still victims causing them to go through a lot of trauma in the process.

According to Jordan Sullivan, Project Coordinator of Conversion Therapy Survivors Support and Survivors of Sexual Orientation and Gender Identity and Expression Change Efforts (SOGIECE), survivors of conversion therapy identify the need for a variety of supports including education and increased awareness about SOGIECE and conversion practices.

Also needed is access to affirming therapists experienced with SOGIECE, trauma (including religious trauma), safe spaces and networks, and access to affirming healthcare practitioners who are aware of conversion therapy or SOGIECE and equipped to support survivors.

“In January of 2021 when I was asked to be the project coordinator, I was hesitant because I wasn’t sure that my experience could be classified as SOGIECE or conversion therapy. I never attended a formalized conversion therapy program or camp run by a religious organization. Healthcare practitioners misdiagnosed me or refused me access to care.

In reality, I spent 27 years internalizing conversion therapy practices through prayer, the study of religious texts, disassociation from my body, and suppression or denial of my sexual and gender identities. I spent six years in counselling and change attempts using conversion therapy practices. I came out as a lesbian at age 33, and as a Trans man at age 51. I am now 61 and Queerly Heterosexual, but I spent decades of my life hiding in shame and fear and struggled with suicidal ideation until my mid-30s.

At times I wanted to crawl away and hide, be distracted by anything that silenced the emptiness, the pain, the wounds deep inside. I realized that in some ways, I am still more comfortable in shame, silence, and disassociation, than in any other way of being and living, but I was also filled with wonderment at the resiliency and courage of every single one of the participants.

However, many of us did not survive, choosing to end the pain and shame through suicide. Many of us are still victims in one way or another, still silenced by the shame, still afraid of being seen as we are. Still, many of us are survivors, and while it has not been an easy road, many of us are thrivers too,” said Jordan.

In addition, Jordan said conversion practices and programs are not easily defined or identified, and often capture only a fragment of pressures and messages that could be considered SOGIECE.

Some in B.C. cross U.S. border for their next COVID-19 vaccine – Global News

Global News Hour at 6 BC

There is evidence of the lengths some British Columbians will go to get a second booster dose of the COVID-19 vaccine — crossing the border to Point Roberts, WA for a shot. The movement comes thanks to the different approach to the fourth shot south of the border. Catherine Urquhart reports.

Why You Can’t Just Order Baby Formula From Canada – Lifehacker