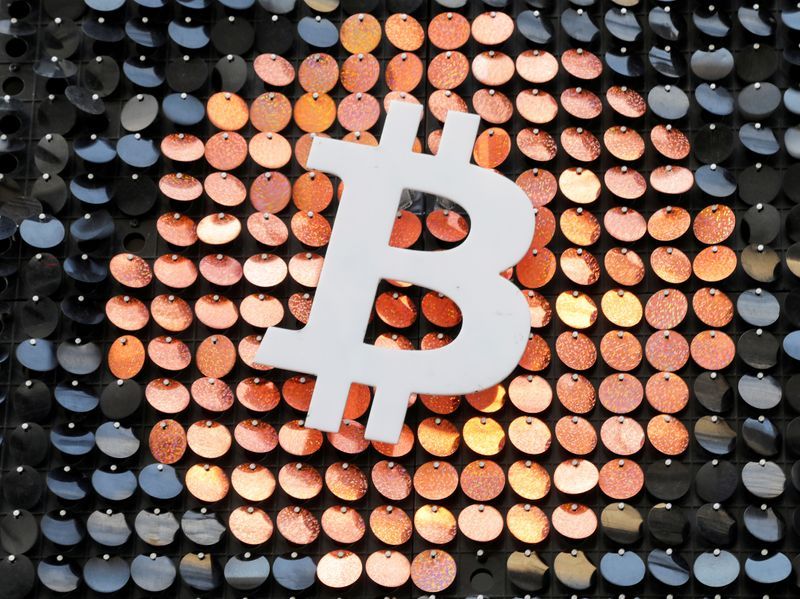 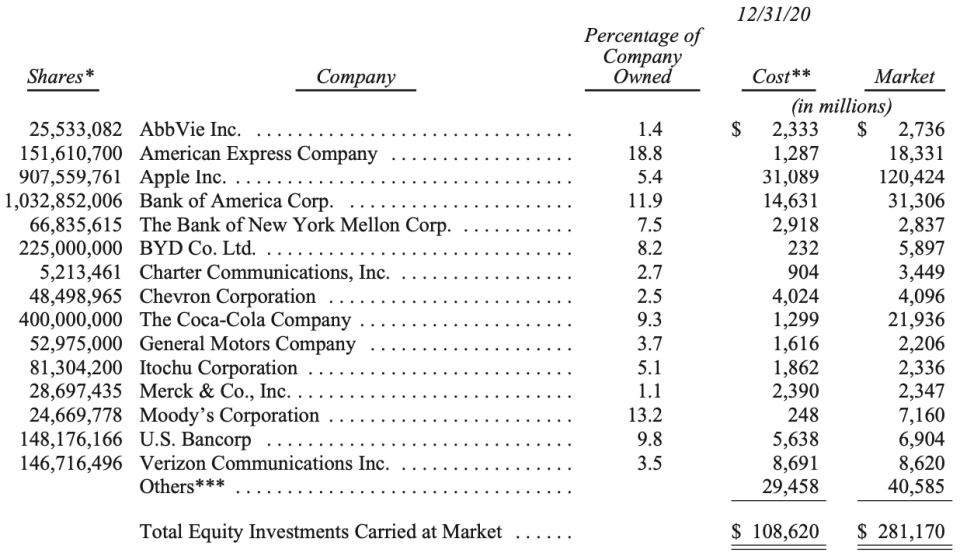 Get the Morning Brief sent directly to your inbox every Monday to Friday by 6:30 a.m. ET. Subscribe

Warren Buffett, the billionaire head of Berkshire Hathaway (BRK-A, BRK-B), will probably go down as the greatest investor in history.

For more than half a century, he’s been responsible for the performance of Berkshire and its legendary stock portfolio, which have long track records of market-beating returns.

Long-term outperformance comes with many years of underperformance

Warren Buffett’s annual letter to Berkshire shareholders was released on Saturday, and as usual the first page compares the annual performance of Berkshire against that of the S&P 500 (^GSPC) since 1965.*

Berkshire shares have seen an average annual return of 20.0% compared to the S&P 500’s 10.2% gain during that period.

But as you can see from the individual data points, there are many years when the S&P outperformed Berkshire.

A good long-term investment strategy will not produce desired returns year in and year out. Rather, it’ll make progress toward some long-term goal over time as fat years more than offset lean years.

“Whatever today’s figures, Charlie Munger, my long-time partner, and I firmly believe that, over time, Berkshire’s capital gains from its investment holdings will be substantial,” Buffett wrote on Saturday.

Furthermore, it’s worth noting that neither Berkshire nor the S&P saw many years where they delivered an average return. Most years either saw massive gains or very disappointing performance. Average almost never happens in markets.

And just because Buffett may be one of the greatest stock pickers in history doesn’t mean all of his stock picks have been winners over time.

To his credit, few people are more vocal about Buffett’s mistakes than Buffett himself.

In 2020, Berkshire booked a $9.8 billion write-down on those assets. One massive “mistake”he discussed in his annual letter was Precision Castparts (PCC), a once publicly-traded company that Berkshire acquired outright in 2016 in a $37 billion deal.

“I paid too much for the company,” Buffett wrote. “I believe I was right in concluding that PCC would, over time, earn good returns on the net tangible assets deployed in its operations. I was wrong, however, in judging the average amount of future earnings and, consequently, wrong in my calculation of the proper price to pay for the business.”

It’s not hard to find times Buffett lost money on a trade or missed out on a big opportunity. Just a year ago, Berkshire dumped airline stocks near their lows just before they roared back along with the other reopening trades.

But a successful investor shouldn’t be judged by his or her mistakes. Rather, they should be judged by the degree to which they are able to achieve their long-term goals.

This goes for all investors who will repeatedly buy too late, sell too early, and miss out on big opportunities that become obvious in hindsight.

So if you’re making a lot of mistakes but have a sound strategy and the discipline to stick to it during periods of underperformance, then maybe you too can be as imperfectly successful as Warren Buffett.

*Since 2019, Buffett has presented Berkshire’s performance as measured by market value. Prior to that, it was book value. Buffett made the change because he felt market value was going to better reflect the performance of the company. For our purposes, all you need to know is that both Berkshire’s book value and market value have smoked the S&P 500 over that half-century.

By Sam Ro, managing editor. Follow him at @SamRo

What to know today

ALSO: February jobs report, Zoom earnings: What to know in the week ahead

For tutorials and information on investing and trading stocks, check out Cashay

The Ontario Teachers’ Pension Plan Board has increased its equity investment in Canadian-based rights company Anthem Entertainment “in order to facilitate the business’s strategy for continued growth.” In addition, the company has announced completion of a new revolving credit facility of $400 million plus a $150 million incremental facility that allows it to expand the maximum amount allowed on its line of credit.

Anthem CEO Helen Murphy stated in a media release that “I am grateful to Ontario Teachers’ for their confidence in our strategy and for their continued support.”

Continuing, she added: “Over the past few years, we have successfully expanded through a strong combination of organic growth and acquisitions, enabling us to further diversify our service offerings and repertoire base, making us more attractive to artists, songwriters, composers, and content producers.

Again, from the announcement: “We believe that with this additional equity investment and our new credit facility we are well positioned to make the most of the opportunities across our music publishing, recorded music, production music, and film and television services businesses. We are also thankful to the banks in our syndicate, many of whom have been long time supporters of Anthem Entertainment throughout our 17-year history.”

In September 2019, Anthem acquired 50% of Nashville based Wrensong led by music row leader Ree Guyer. The deal also included a co-venture with Wrensong Publishing Corp. that includes a catalogue of over twenty #1 country hits, including Old Dominion’s Make It Sweet, No Such Thing As A Broken Heart, Hotel Key, #1 hits by Dierks Bentley, The Band Perry, Blake Shelton, Carrie Underwood, and Jason Aldean.

In October of the same year, Anthem has acquired a catalogue of songs from Boardwalk Music Group, which were co-written by songwriter Eric Frederic (Ricky Reed). The catalogue includes some of the world’s biggest hits by artists such as Halsey, Leon Bridges, Lizzo, and Meghan Trainor.  The LA-based publishing and artist development company was founded by songwriter and creative executive Evan “Kidd” Bogart, the son of Neil Bogart of Casablanca Records fame.

Then in November 2019, Anthem acquired a catalogue of songs from songwriter and producer Doc McKinney. Key assets included The Weeknd’s Wicked Games, Starboy, Die For You, and Pray For Me.

In February 2020, Gord Bamford extended his worldwide publishing deal with the Anthem Entertainment. Anthem also acquired Bamford’s masters from Cache Entertainment including all albums from 2001’s God’s Green Earth, to Diamonds In A Whisky Glass (due out later this year). Bamford is the two-time winner of the CMA Global Country Artist Award, with 25 Top 10 singles in Canada including the No. 1 hits When Your Lips Are So Close and Dive Bar.

Founded in 2004 as Ole, the Ontario Teachers Pension Fund has been a key investor in the Canadian rights management company. It expanded its position in acquiring company co-founder Robert Ott’s position in the company in 2018 and now holds a controlling interest in the privately held firm.

In 2015, the company acquired all the rights to the Anthem Entertainment brand, including Anthem Film & Television Productions, and the recorded music catalogue highlighted by recordings by Rush as well as Max Webster, Big Wreck, Ian Thornley, Steven Page, The Tea Party, and Max Webster. The company rebranded itself as Anthem Entertainment in 2019

China’s investment in Australia plunged to a record low of A$1 billion ($775 million) last year, according to data compiled by The Australian National University, as relations between the two countries soured amid the pandemic.

Investment by Chinese companies Down Under fell 61% in 2020, following a 47% fall in the prior year. This was the lowest level of activity in the six-year history of the data that’s part of the ANU’s Chinese Investment in Australia Database. The number of projects recorded was only 20, well down from a peak of 111 in 2016 when investment amounted to A$16.5 billion.

Relations between the two nations deteriorated last year after Prime Minister Scott Morrison led calls for an independent probe into the origins of the coronavirus and saw China hit products from barley to wine to lobsters with tariffs, anti-dumping probes or delays at port. Separately, Australia tightened investment-screening arrangements with foreign powers.

The dip “reflects the effects of Covid but also more scrutiny of foreign investment by the Australian government, particularly that from China,” said Shiro Armstrong, Director of the East Asian Bureau of Economic Research at the ANU in a release Monday.

Laws passed in December give Australia’s foreign minister the power to stop signed agreements between overseas governments and Australia’s eight states and territories, and with local authorities and universities.

Armstrong said that 86% of the investment in 2020 was from Chinese companies already established in Australia and was limited to the real estate, mining and manufacturing sectors.