Commercial real estate owners aren’t as high on cannabis legalization as they had hoped they’d be.

More than a year after cannabis was legalized in Canada, some analysts say the sometimes-overhyped economic potential of the pot industry also infected B.C.’s commercial real estate market.

As the country closed in on the legalization date last year, many in the real estate industry were excited about potential sales and investment opportunities. For realtors, cannabis legalization meant additional production facilities and retail spaces to sell or lease. However, that boom has yet to materialize.

As of late 2019, B.C. had the lowest sales of legal cannabis of any province, according to Statistics Canada, and the second-lowest cannabis store density in the country.

“There should have been no surprise that this was going to be a slow-moving beast,” said Elton Ash, regional executive vice-president for Re/Max of Western Canada. “Of course that’s easy to say now in hindsight.”

The emerging cannabis industry has not sparked the economic activity many were expecting. While some large production facilities have been built, the cannabis market has suffered falling sales, and stock prices have dropped. The industry has therefore not had the capital or demand needed to expand. This has resulted in lacklustre commercial real estate sales compared with what was anticipated.

Ash said the good news is that there wasn’t a speculative surge in construction because commercial real estate owners want predictability and stability in demand before they react.

While the cannabis industry didn’t spark an immediate commercial real estate boom, there has been some positive impact on the real estate market, Ash said.

“The cannabis sector is adding additional market for retail and industrial use,” he said. “The story on this is that cannabis provides an additional segment to a commercial market that didn’t exist and will continue to grow.”

In addition to lacklustre demand, Vancouver’s retail landlords looking to benefit from the legal cannabis industry have had trouble obtaining traditional commercial financing from banks.

As the cannabis market and industry grow, demand from  ancillary businesses, such as paraphernalia shops, will add to commercial real estate needs – and while legalization may not have created the commercial real estate demand some were hoping for, Ash said a slower and steadier demand growth is likely in the future.

The plunge in share prices for cannabis-sector stocks is shaking up corporate business plans and changing the nature of the legal work commissioned by executives.

Instead of needing assistance in securing loans, getting equity financing or navigating an initial public offering, cannabis ventures are increasingly seeking help to restructure.

Many licensed producers that once scrambled to produce sufficient quantities of cannabis are sitting on a heap of excess inventory – something that is driving down prices for dried cannabis and forcing producers to mark down the value of their production on corporate balance sheets.

The funk that has set in has pushed down shares in the cannabis-sector index fund Horizons Marijuana Life Sciences Index by more than 60 per cent as of December since it hit its year high of $23.87 on March 19. During that same time period, the Toronto Stock Exchange is up about six per cent, and the S&P 500 index has risen by more than 11 per cent.

“The financing side seems to be slowing down significantly, and what we’re preparing for is a restructuring of the industry in the sense of being ready for mergers and acquisitions and consolidation – expecting some of the bigger players who have equity on their books to make moves and try to acquire some of the juniors,” said Borden Ladner Gervais LLP partner Stephen Robertson. “That and getting ready for bankruptcies, and allowing companies to restructure.”

There were hopes of taking those entities public but those are long-term plans, he added.

“A lot of our activity is related to people still trying to open retail locations,” he said.

However, the spread of bricks-and-mortar cannabis stores in provinces such as B.C., and particularly Ontario, has been notoriously slow.

“In the wake of July’s interest rate hike, home sales in Waterloo region continued to slow,” says Megan Bell, president of WRAR, in a media release. “We’re seeing a clear shift in the market and what people can afford to purchase or are willing to pay. On the bright side for buyers, it’s not the extreme sellers’ market it was.”

This is the fifth straight month the average home sale price in Kitchener-Waterloo has fallen. 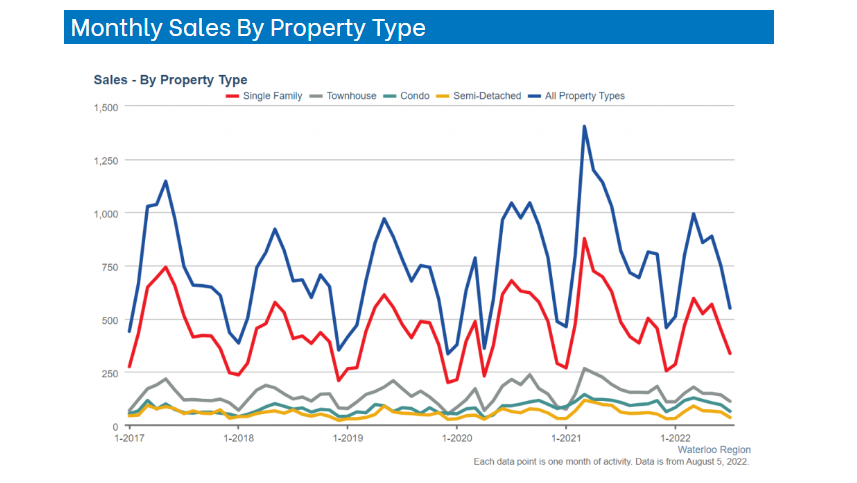 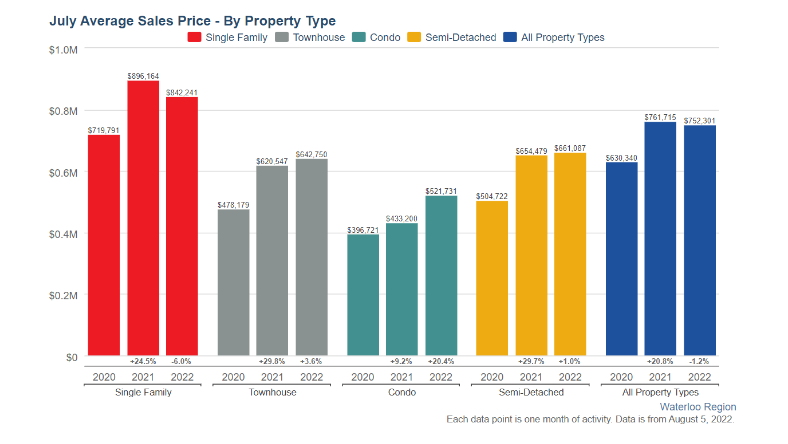 In total, 550 residential homes were sold through the Multiple Listing Service System of the WRAW.

“Bringing these two associations together just makes sense,” says Duce in a media release. “As one board, we can better serve the needs of our Realtor members and stakeholders and give a voice to the region’s real estate market.”

The board of directors of WRAR appointed Megan Bell as president, Christal Moura as president-elect, and Val Brooks as immediate past president as officers of the new entity. 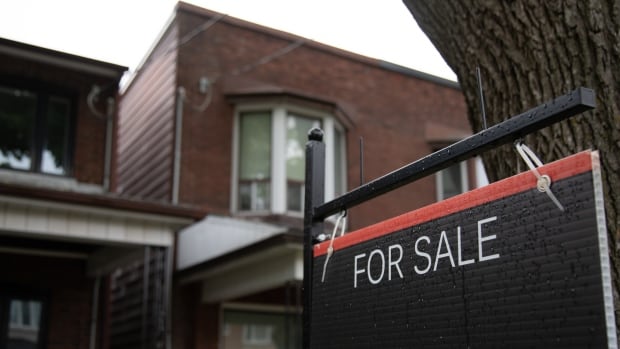 The moderation of the Greater Toronto Area’s housing market intensified last month as the region’s real estate board found July sales fell 47 per cent from the same time last year and 24 per cent from this past June.

The Toronto Regional Real Estate Board revealed Thursday that last month’s 4,912 sales were almost half of the 9,339 homes that changed hands the July before and are an indication that the market is easing from the frenzied pace seen in the first half of the year and at the end of 2021.

The board and real estate agents have attributed much of the moderation to the increased cost of carrying a mortgage after Canada’s key interest rate was increased by one percentage point in mid-July, making it the largest hike the country has seen in 24 years.

The hike has encouraged people to rethink their housing intentions. Prospective buyers are holding out for further drops they and brokers anticipate could materialize in the fall, while sellers are debating making what they can from their home now or waiting for the market to turn in their favour again.

Some sellers are even terminating their listings to take advantage of the hot rental market, where vacancies are dropping and prices are up.

The moderation taking shape within sales is taking longer to appear in home prices.

The composite benchmark price was more than $1.1 million, up by 12.9 per cent year-over-year.

The market also saw a drop in new listings, which amounted to 12,046 last month, down four per cent from a year ago.

“Many GTA households intend on purchasing a home in the future, but there is currently uncertainty about where the market is headed,” said TRREB CEO John DiMichele, in a release.

“Policymakers could help allay some of this uncertainty.”

He recommended the government review the Office of the Superintendent of Financial Institutions’ stress test. The mandatory test set the qualifying rate on uninsured mortgages at either two percentage points above the contract rate, or 5.25 per cent, whichever is greater.

Kevin Crigger, TRREB’s president, echoed DiMichele’s plea, saying longer mortgage amortization periods of up to 40 years on renewals and switches should be explored.

“With significant increases to lending rates in a short period, there has been a shift in consumer sentiment, not market fundamentals,” he said, in a release.

“The federal government has a responsibility to not only maintain confidence in the financial system, but to instill confidence in homeowners that they will be able to stay in their homes despite rising mortgage costs.”