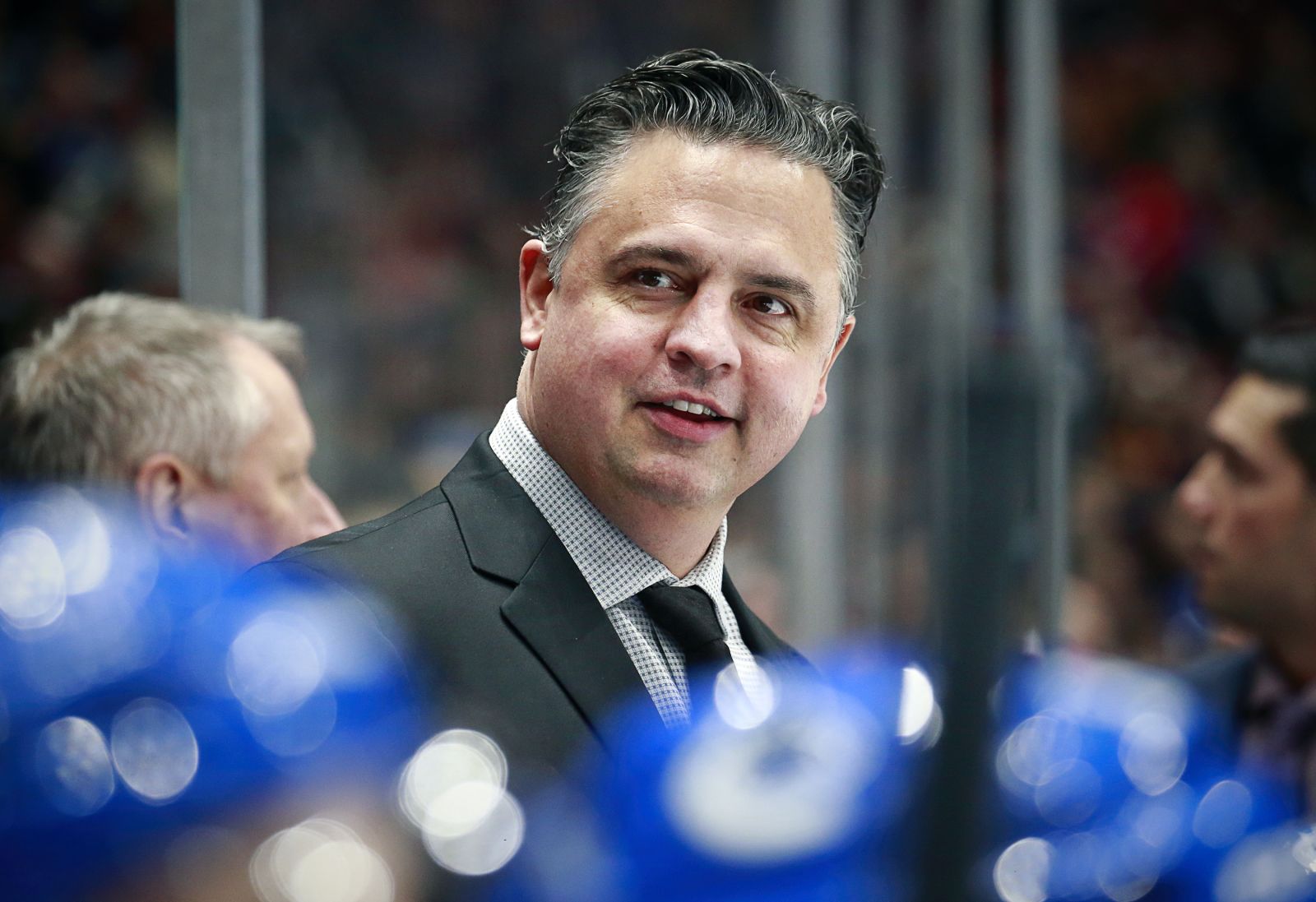 After a few rough performances by the Vancouver Canucks, some fans are calling for a change behind the bench.

The Vancouver Canucks lost 3-1 to the Montreal Canadiens on Tuesday night, and many fans have taken to Twitter to voice their frustrations. Numerous players received criticism for the poor performances, but nobody drew more heat than head coach Travis Green.

Many called out his team’s playing stile, and some even called for Green to be fired.

But should general manager Jim Benning make the change behind the bench? Let’s analyze.

Here are some of the concerns or problems that I and many other fans have with Green. First of all, I think his  team look is too predictable at 5-on-5. It seems like the other teams just know what to do when Vancouver enters the offensive zone.  They simply don’t look creative.

Another thing that irks me is that when the Canucks have a lead, Green often decides to sit back and play the trap. As a result, they ended bottling it.

When they are down, I feel Green doesn’t motivate his players enough. It makes you wonder if Green has lost the dressing room.

More from The Canuck Way

Should the Canucks fire Green?

A Reddit user by the name of ImActuallyAnOtter pointed out — after Sunday’s loss against the Vegas Golden Knights — that since Nov. 5, Vancouver had only picked up 16 points. This simply isnt good enough, and if they keep up this pace or struggle even more, Green’s seat might get even hotter.

But is a coaching change really necessary? Vancouver is still in the hunt for a playoff spot. They’re four points behind the Calgary Flames for the final wild card spot in the Western Conferene.

Players like Elias Pettersson, Brock Boeser and Quinn Hughes have taken strides — and players like J.T. Miller and Jacob Markstrom have been superb.

Firing a coach mid-season isn’t a new concept. After all, the St. Louis Blues were last in the NHL around this time last year, and they fired Mike Yeo. They replaced him with Craig Berube, and the team went on to win the Stanley Cup.

The Canucks haven’t fired a head coach mid-season since Mike Keenan during the 1998-99 season, and they replaced him with Marc Crawford.

If Green does get fired, who would replace him? Nolan Baumgartner or Newell Brown might have to take the reins. If the Canucks were to hire a veteran coach, who should they go with? Pete Deboer? John Hynes? Let’s not even think about hiring Mike Babcock.

I have some problems with Green ,but I think the Canucks shouldn’t fire him just yet. However, if they keep having performances like the one they had in Vegas, Green just might see the door.

TORONTO — The price of much-needed roster flexibility was a piece of the goaltending depth Kyle Dubas amassed this off-season.

The Toronto Maple Leafs lost goaltender Aaron Dell on waivers Monday before he even had a chance to play for the team. The closest Dell got was serving as Jack Campbell’s backup in Ottawa on Saturday night and now he’s off to New Jersey, where the Devils have been searching for more help since Corey Crawford’s retirement in training camp.

Toronto knew it had little chance of sneaking a 31-year-old with more than 100 games of NHL experience through the waiver wire, especially in this marketplace. There have been five goaltender claims since the NHL season began and it’s believed Edmonton was going to grab Dell if New Jersey didn’t take him first.

The move was necessitated by the fact the Leafs were only able to carry 18 skaters under the salary cap ceiling and lost Nick Robertson to a left knee injury that will sideline him for at least the next four weeks.

“[Robertson] had an MRI yesterday. The results we got back … I guess we would classify it as good news considering how it was looking,” Leafs coach Sheldon Keefe said before Monday’s game against Winnipeg. “But he is going to miss some time.”

The fact Robertson will miss at least 24 days and 10 games allows him to be placed on long-term injured reserve while he’s out. In waiving Dell and veteran centre Jason Spezza, who cleared and was assigned to the taxi squad in a paper move, Toronto was able to get just under the $81.5-million cap ceiling before placing Robertson’s salary on LTIR.

That should make it easier to move players back and forth from the taxi squad, giving Keefe more options to work with in the coming month. He put that directly to use by bringing up Mikko Lehtonen for his NHL debut against Winnipeg as part of an 11F/7D rotation.

“We want to get him going here today and really try to get a feel for how he can compete in the league, and give him a chance to do that,” Keefe said of Lehtonen. “The greatest challenge for players like him is the nature of training camp and no exhibition season is you can’t really get the kinks out, you can’t make the adjustments, you can’t make the mistakes in those games that don’t matter and then have it cleaned up by the time you’re playing for real.”

It shouldn’t be long before Rasmus Sandin, Travis Boyd and Adam Brooks jump up from the taxi squad and get some playing time as well.

Depth is necessary to get through every season, but the challenges are even greater with the compressed schedule and the lingering threat of positive COVID-19 cases.

That’s part of the reason why the Leafs brought in both Dell and Michael Hutchinson on one-way contracts in October despite already having Campbell and Frederik Andersen in-house.

“We did that before we knew what the schedule was exactly going to look like and we just wanted to make sure that we had as much depth as possible,” Dubas said earlier this month. “Not knowing the way that things were going to be, we just felt that having as many capable NHL goaltenders was going to be important.”

Hutchinson moves up to the No. 3 role with Dell on his way to New Jersey.

That could wind up being a big opportunity for him career-wise but it had to be tinged with a whiff of disappointment. Dell only got to pull on the Leafs sweater in an intra-squad scrimmage during training camp and to serve as the backup over the weekend, and never put his Felix Potvin-inspired pads in any real action as a result.

“He’s a quiet guy that just goes about his business and stays ready,” said Keefe. “That’s really what you’re looking for in terms of personality and how he’s handled himself. … He’s an established goaltender in the league and we knew when signing him that it would be difficult to get him through waivers if it came to that.

Robertson was injured in the first period of the team’s 3-2 win over the Ottawa Senators after a hit from Drake Batherson.

The 19-year-old Robertson appeared in four of the Maple Leafs’ five playoff games against the Columbus Blue Jackets, scoring one goal. He replaced fellow rookie Alexander Barabanov on the fourth line Saturday and had one shot in 2:20 of ice time before his injury.

We knew the Toronto Maple Leafs were going to have to be creative with the salary cap situation. General Manager Kyle Dubas said there would be a lot of paperwork to file out to stay compliant, but it was just a formality for the most part. But that paperwork started a dumpster fire on Sunday morning. Jason Spezza hit the waiver wire, and within minutes it got worse. Sportsnet’s Chris Johnson spoke with Spezza’s agent, Rick Curran, who said Spezza would “simply retire” if another team claimed him.

What just happened? Spezza has played well as a fourth-line centre. He won all 10 of his face-offs on Saturday night in a win over the Ottawa Senators. He recorded his 600th career assist in the opening game against the Montreal Canadiens. He even played a few shifts on the second line with John Tavares and William Nylander. These facts did not lead anyone to imagine that his hometown team would waive the 37-year-old veteran.

I’m sure Dubas did not come to this decision lightly. It’s a ripple effect of Nic Robertson injuring his knee in the first period of the game on Saturday night. A move had to be made to bring up another player from the taxi squad. According to his agent, Spezza understood the risks of these roster moves when he resigned with Toronto. He was happy to continue to play a depth role and offer leadership.

Rough Ride for Spezza in Toronto

I get that this is business, but you have to feel for the guy. He came to Toronto to pursue his dream of winning a Stanley Cup. In his first game with the organization, Mike Babcock gave the veteran the healthy scratch with several family members in attendance. A move that lit up the Toronto sports commentators for weeks. Now just three games into his second season with the Maple Leafs, he is put on the waiver wire.

It seems unlikely Spezza will be claimed. However, Toronto may lose its third goalie. Aaron Dell has also been put on waivers. Toronto was carrying three goalies to offer more downtime to Frederik Andersen and Jack Campbell. Andersen didn’t dress on Saturday night.

A Move Was Coming

Before Saturday’s game, Sheldon Keefe was asked about his ability to make lineup changes. His answer left it open to this kind of move. “You get the extra goalie insurance the depth there, and of course we value,” said Keefe. “I think when you look at our situation carrying a 21 man roster, and one of those guys is a third goalie, it limits our ability to make lineup changes. But a lot can happen in a season, and things can change quickly.”

Those changes did happen quickly. Not only in Toronto, but the Edmonton Oilers are facing challenges. Mike Smith was placed on the long-term injured reserve list. Edmonton lost back-up Anton Forsberg, who had earlier been claimed off waivers. This left Edmonton one minor injury from a disaster in the net. The Oilers have signed two goalies since, but due to quarantine restrictions, they are not available to the team until January 27. Edmonton is 19th on the waiver wire list. Not only that, the Oilers are in Toronto for a game on Wednesday and Friday. It’s hard to imagine that Dell will not be claimed.

We are just three games into the 56-game regular season. We are getting a sense of how difficult it will be for teams and players to manage the new world of quarantine restrictions. Who could’ve predicted that Robertson’s knee injury could lead to a possible retirement of Spezza and could possibly help out a North Division rival? This is the new normal.

Why can some people 'hear' the voices of the dead? Scientists have an answer – Yahoo Canada Sports