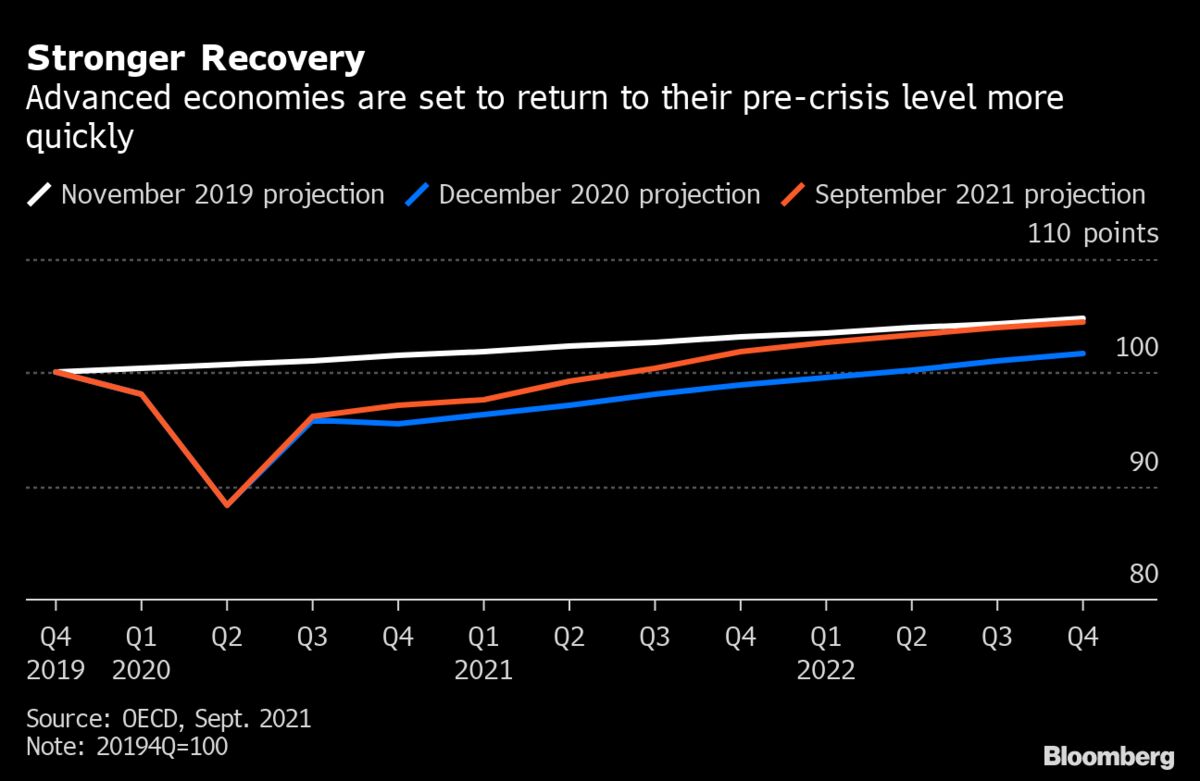 The world economy is facing a buildup in stagflationary forces as surging energy prices boost inflation and slow the recovery from the pandemic recession.

Oil’s climbed to more than $80 a barrel for the first time in three years, natural gas for October delivery traded at the costliest in seven years and the Bloomberg Commodity Spot Index rose to the highest level in a decade.

LONDON — Britain’s economy unexpectedly regained momentum in October and cost pressures rose by the most in more than 25 years, according to a survey on Friday that could encourage the Bank of England to raise interest rates for the first time since the pandemic.

The preliminary “flash” IHS Markit/CIPS flash Composite Purchasing Managers’ Index rose by the largest amount since May to hit 56.8 from September’s 54.9. By contrast, a Reuters poll of economists had pointed to a further slowdown to 54.0.

“The UK economy picked up speed again in October, but the expansion is looking increasingly dependent on the service sector, which in turn looks prone to a slowdown amid the recent rise in COVID-19 cases,” said IHS Markit’s chief business economist, Chris Williamson.

The rise in the PMI was driven by Britain’s services firms as consumers and businesses picked up their spending. Travel firms benefited from a relaxation of COVID-19 travel rules.

Service sector activity outpaced manufacturing output by the widest margin since 2009 as factories struggled again with shortages of supplies and staff and recorded barely any growth.

A rise in overall employment was close to August’s record high, despite problems in filling vacancies.

Higher wages and the worsening supply shortages resulted in the fastest increase in average costs since the combined composite index was launched in January 1998. Separate PMIs for the services and manufacturing sectors showed prices charged by firms rose by the most since these series began in 1996 and 1992 respectively.

With inflation set to hit more than double its 2% target soon, the BoE is expected to raise borrowing costs soon as it tries to make sure that rising inflation expectations do not become embedded in British businesses’ pricing decisions.

The Confederation of British Industry said on Thursday that manufacturers were raising prices by the most since 1980 in the face of some of the biggest increases in costs and labor shortages since the 1970s.

The PMI for the services sector rose to 58.0, its highest in three months, while the manufacturing PMI’s output component – which IHS Markit says currently gives a better picture of the sector than the headline index – sank to its lowest since February at 50.6.

Despite the improved picture for most companies, many consumers are concerned about the outlook for the economy.

A survey published earlier on Friday showed Britons were their most downbeat since they February, when they were under lockdown, and are increasingly worried about the year to come as prices and COVID cases rise. (Reporting by William Schomberg; Editing by Hugh Lawson)