The AstraZeneca vaccine, blood clots and VIPIT: What you need to know – CTV News 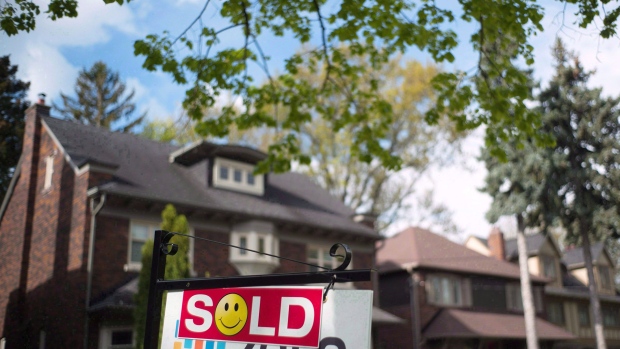 The Toronto Regional Real Estate Board says housing demand in July dropped compared to the previous year, but still remains above average for the season in 2021.

The board says nearly 9,400 home sales were reported in July, down 14.9 per cent compared to July 2020, which set a record for housing sales in the summer month.

On a seasonally adjusted basis, the board says July’s sales were down by two per cent compared to June.

The board also says the Toronto housing market tightened in July, with the month’s sales accounting for a greater share of listings compared to July 2020.

It says the average price for all home types combined was just over $1 million, up 12.6 per cent compared to a year ago.

On a seasonally adjusted basis, the board says the average price of all home types was up 0.9 per cent compared to June.

“The annual rate of price growth has moderated since the early spring but has remained in the double digits. This means that many households are still competing very hard to reach a deal on a home,” said TRREB Chief Market Analyst Jason Mercer in a statement.

“This strong upward pressure on home prices will be sustained in the absence of more supply, especially as we see a resurgence in population growth moving into 2022.”

Mercer noted that there is a large backlog of people seeking permanent residency or citizenship status in Canada due to the pandemic, which will lead to continued pressure on the Toronto area’s housing market.

This report by The Canadian Press was first published Aug. 5, 2021.

Canada’s health authority has given the green light to mix-and-match COVID-19 vaccines, but as the world reopens, not all are recognizing a mix of vaccines from different makers as fully vaccinated, despite millions of Canadians doing so.

Here’s who has announced so far they do not accept mixed vaccines.

The Centre for Disease Control (CDC), the U.S.’s main health body, does not currently recognize a mix of a vector vaccine, such as AstraZeneca, with an mRNA vaccine, such as Pfizer or Moderna, as fully vaccinated.

It does, however, recognize a mix of two mRNA vaccines, such as Pfizer and Moderna, as fully vaccinated.

As such, many cruise lines are following the CDC’s guidance in their own protocols for who can come aboard.

Princess Cruises, Celebrity Cruises, Carnival Cruise Line and Holland America have said they will not recognize those who have mixed an AstraZeneca vaccine with an mRNA vaccine as fully vaccinated, citing CDC’s guidance.

“Following CDC guidelines, Celebrity will consider a guest ‘fully vaccinated’ with proof of vaccination that can include mixed doses of the Pfizer and Moderna mRNA vaccines only. No other mixed vaccine doses will qualify a guest as ‘fully vaccinated,’” Celebrity Cruises’ website reads.

Norwegian Cruise Line is going further and not accepting any mix of vaccines, including two mRNA vaccines, when departing from U.S. ports, but will accept a mix of “only AstraZeneca-SK Bio, Pfizer-BioNTech or Moderna combinations” from non-U.S. ports.

Royal Caribbean will not accept mixed doses when departing from a U.S. port, but will from non-U.S. ports, depending on the specific country’s policy.

Already Canadians have been caught off-guard by some of these policies.

Travel bloggers Karen and Brian Hosier of Port Coquitlam, B.C., have six cruises booked over the next year, but both were first vaccinated with AstraZeneca and and then Pfizer.

“It’s a little bit frustrating. We don’t know at this point whether to cancel [our] trip,” said Karen.

Zahid Butt, an infectious disease epidemiologist at the University of Waterloo, said there is no evidence to show that mixing-and-matching vaccines is harmful and said studies show that mixing AstraZeneca with a second dose of Pfizer is better in creating antibody response to the virus.

“There is no scientific evidence to say people who have a second dose, which is of a different vaccine, would have lesser immunity than the ones who have the same vaccine,” he said.

“There has to be scientific evidence to justify why you are not allowing people to join cruises.”

In addition to cruises, some countries have their own policies toward mixed vaccines, as well as the COVISHIELD vaccine — the Indian-made version of AstraZeneca.

Trinidad and Tobago currently do not accept travellers with a mix of Moderna and Pfizer vaccines but does allow an AstraZeneca and Pfizer or Moderna mix.

“For 2-dose series COVID-19 vaccines, passengers must have received 2 doses of the same vaccine OR the first dose of the AstraZeneca vaccine followed by the second dose of the Pfizer vaccine,” the country’s travel requirements read.

“Passengers with any other combination of vaccines would NOT be considered fully vaccinated, at this time.”

Barbados reversed its policy on July 15 to allow mixed vaccines after initially not accepting it.

Elsewhere in the Caribbean, Jamaica will accept anyone with two doses of a World Health Organization-approved (WHO) vaccine, mixed or not, and Cuba and the Dominican Republic have no vaccine requirements.

Read more:
With cheap flights and eased travel restrictions, should Canadians be booking their next trip?

While the U.S. doesn’t currently require vaccinations for travellers, the CDC’s guidance could pose trouble for some Canadians if the country were to use its guidance in its travel requirements. The U.S. also has not approved the AstraZeneca vaccine.

Already a Lady Gaga and Tony Bennett concert will require full vaccination under New York state’s guidelines, which currently follow the CDC’s lead — meaning no mix-and-match of AstraZeneca with an mRNA vaccine.

The WHO currently has not issued guidance on mixing vaccines but said that there is currently limited data on doing so and warned of a “dangerous trend” of vaccine shopping for extra doses.

According to Health Canada, at least 1.3 million Canadians mixed doses in June.

Over in Europe, several countries, such as Italy, Portugal and Poland, do not recognize COVISHIELD, which has been approved in Canada and has been administered to over 80,000 Canadians.

This means that visitors with that vaccine must quarantine and provide a COVID-19 test.

A growing number of European countries, though, do accept the vaccine, including Spain, Greece, Iceland and France.

In response to some of these policies, Quebec will now allow its residents to get a third shot of an mRNA COVID-19 vaccine to avoid policies against mixing vaccines and the COVISHIELD vaccine.

The province warns, though, to seek advice and weigh the risks before getting an extra shot.

“This measure is exceptional and the person should be properly counselled to be informed of the potential risks associated with this additional dose, compared to the benefits of the planned trip,” Quebec’s health department said in a statement.

– With files from Julia Wong and Alessia Simona Maratta

Oil prices edged higher on Thursday, supported by tensions in the Middle East, but failed to regain most of the previous day’s losses after a surprise build in crude stockpiles in the United States, the world’s top oil consumer.

Israeli aircraft struck what its military said were rocket launch sites in south Lebanon early on Thursday in response to earlier projectile fire towards Israel from Lebanese territory.

Two rockets launched from Lebanon on Wednesday struck Israel, which initially responded with artillery fire amid heightened regional tensions over an alleged Iranian attack on an oil tanker in the Gulf last week.

The exchange came after an attack last Thursday that Israel blamed on Iran on a tanker off the coast of Oman. Two crew members, a Briton and a Romanian, were killed. Iran denied any involvement.

The U.S. State Department said on Wednesday it believed Iranians hijacked the Panama-flagged Asphalt Princess tanker in the Gulf of Oman but was not in a position to confirm.

Helping check gains, a rise in locally transmitted Covid-19 cases in China, the world’s second largest oil consumer, that has prompted restrictions in some cities and cancellation of flights is threatening demand, analysts said.

Still, some analysts pointed to a bigger-than-forecast 5.3 million barrel fall in fuel stockpiles.

“The fall in U.S. gasoline stockpiles to the lowest level since November 2020 suggests that fuel demand conditions in the U.S. are still quite resilient,” analysts from Commonwealth Bank of Australia said in a note on Thursday.

The bank expects Brent oil prices to rise to $85 a barrel by the fourth quarter as oil demand outpaces supply growth.