Facebook Inc asked a judge on Monday to dismiss the U.S. government’s revised antitrust case that seeks to force the social media giant to sell Instagram and WhatsApp.

Facebook said in a court filing that the Federal Trade Commission (FTC) had failed to provide a “plausible factual basis for branding Facebook an unlawful monopolist.” The company added it appears the FTC “had no basis for its naked allegation that Facebook has or had a monopoly.”

The social media giant asked that the lawsuit be dismissed with prejudice, which would make it harder for the agency to amend the lawsuit. The FTC declined to comment.

Judge James Boasberg of the U.S. District Court for the District of Columbia ruled in June that the FTC’s original complaint filed in December failed to provide evidence that Facebook had monopoly power in the social-networking market.

The FTC’s amended complaint, filed in August, added more detail on its accusation the social media company crushed or bought rivals and again asked Boasberg to order the sale of Instagram and WhatsApp.

The FTC argued at length in its revised complaint that Facebook dominates the U.S. personal social networking market with more than 65% of monthly active users since 2012.

Facebook filing said the FTC’s complaint was “at odds with the commercial reality of intense competition with surging rivals like TikTok and scores of other attractive options for consumers.”

The FTC voted 3-2 along party lines in August to file the amended lawsuit and denied Facebook’s request that agency chair Lina Khan be recused.

In its motion, Facebook argued that the FTC vote to file the amended complaint was not valid because Khan participated.

It included a long series of statements from Khan, made before she became chair of the FTC, which were critical of the social media giant. In a series of tweets from December 2020, she praises lawsuits brought by the FTC and state attorneys general saying “hopeful that it marks yet another step forward in the growing efforts to rehabilitate antitrust laws.”

“The FTC challenges acquisitions that the agency cleared after its own contemporaneous review…,” the motion said. “The case is entirely without legal or factual support. This is as true now as it was before.”

Facebook also included a dissent from FTC Commissioner Christine Wilson, a Republican, who had voted to oppose filing the amended lawsuit because the FTC had raised no objections to the Instagram and WhatsApp deals.

Will the Media Finally Learn Something From Its Fake “Havana Syndrome” Debacle? – Jacobin magazine

And the Los Angeles Clippers were the latest to suffer the Steph experience.

The Golden State Warriors‘ point guard made up for his self-assessed “trash” performance in Tuesday’s season opener against the Los Angeles Lakers. He dropped 45 points, grabbed 10 rebounds and made 8-of-13 shots from 3-point land in a close 115-114 victory over the Clippers in the Warriors’ home opener. Curry started the game perfectly — netting his first 10 shots of the contest. He never slowed down and carried the Warriors to an exciting victory.

So @StephenCurry30 had a night…

As the two-time MVP was lighting up the Clippers, social media exploded, offering thoughts on what everyone just witnessed from Curry. It’s safe to say the point guard left many in awe with his sensational scoring night.

I did watch the end of the Warriors game. I love the Warriors. @StephenCurry30 is a revelation…

What a basketball sensation

Steph Curry is his own sport.

It remains unclear how one should go about defending Steph Curry

Even though Curry had a masterful performance, maybe the most important takeaway from Thursday’s game is that the Warriors are 2-0 on a young NBA season.

Nine months after being expelled from social media for his role in inciting the Jan. 6 U.S. Capitol insurrection, former president Donald Trump said Wednesday he’s launching a new media company with its own social media platform.

Trump says his goal in launching the Trump Media & Technology Group (TMTG) and its “Truth Social” app is to create a rival to the big tech companies that have shut him out and denied him the megaphone that was paramount to his national rise.

“We live in a world where the Taliban has a huge presence on Twitter, yet your favourite American President has been silenced,” he said in a statement. “This is unacceptable.”

Conservative voices actually do well on traditional social media. On Wednesday, half of Facebook’s 10 top performing link posts were from conservative media, commentators or politicians, according to a daily list compiled by a New York Times technology columnist and an internet studies professor using Facebook’s own data.

Trump has spoken about launching his own social media site ever since he was barred from Twitter and Facebook. An earlier effort to launch a blog on his existing website was abandoned after the page drew dismal views.

TMTG has not set its sights low. In addition to the Truth Social app, which is expected to soft-launch next month with a nationwide rollout early next year, the company says it is planning a video-on-demand service dubbed TMTG+ that will feature entertainment programming, news and podcasts.

One slide in a TMTG presentation on its website includes a graphic of TMTG’s potential competitors, which range from Facebook and Twitter to Netflix and Disney+ to CNN. The same slide suggests that over the long term TMTG will also become a power in cloud computing and payments and suggests it will go head-to-head with Amazon, Microsoft, Google and Stripe.

The same graphics also feature a user named Jack’s Beard, who in one image fumes when an employee pushes back on an order to delete a user and its posts, calling it “kinda an overreach.”

The Jack’s Beard account uses the handle @jack, which is the real Twitter handle of Jack Dorsey, Twitter’s CEO; Dorsey’s long scraggly beard has also drawn attention during his congressional appearances over Zoom.

The terms of service for Truth Social, meanwhile, bar users from annoying any of the site’s employees and from statements that “disparage, tarnish, or otherwise harm, in our opinion, us and/or the Site.” It was not immediately clear who the “us” in that statement refers to.

In a release, the new venture announced it had been created through a merger with Digital World Acquisition Corp. (DWA), and said it seeks to become a publicly listed company.

DWA, based in Miami, is a special-purpose acquisition company, or SPAC. Such publicly traded companies are designed to list the shares of a private company more quickly than a traditional initial public offering.

In practice, that means the SPAC acquires a private firm and then changes its name and other details to those of the acquired firm.

Deal has initial value of $875M US

SPACs pay for their acquisitions with cash provided by investors who bought into the SPAC’s initial public offering. DWA’s Sept. 8 IPO raised $287.5 million US, according to a filing with the Securities and Exchange Commission.

DWA said it has raised roughly $293 million in cash, which it will use to grow TMTG’s ventures. Among the company’s biggest shareholders are several institutional investors, including Lighthouse Investment Partners, D. E. Shaw & Co., and Radcliffe Capital Management, according to an SEC filing. DWA said more details about the deal will be disclosed in upcoming filings.

The deal has an initial enterprise value, a measure that takes into account a company’s total debts and assets, of $875 million, according to the release. It still requires the approval of shareholders of both DWA and TMTG, as well as regulators.

Shares of Digital World Acquisition soared 94 per cent to $19.32 in morning trading. 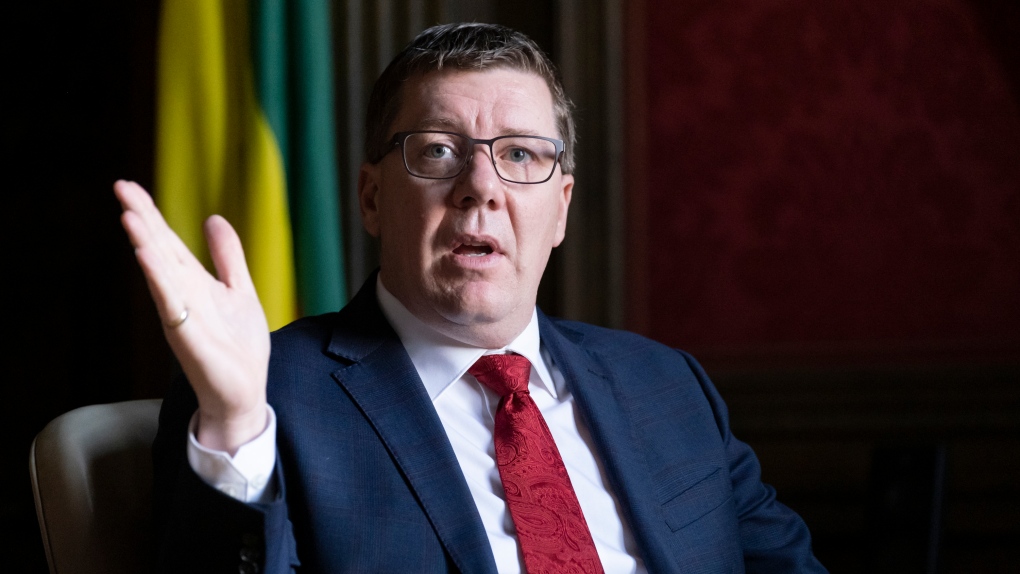 The statement comes following social media posts by doctors in Saskatchewan and Ontario that said upcoming ICU patient transfers from Saskatchewan to Ontario had been cancelled.

Dr. Hassan Masri, an ICU physician from Saskatoon, tweeted the Saskatchewan government has called off all further patient transfers to Ontario ICUs, which the Provincial Emergency Operations Centre denies.

I hold @PremierScottMoe personally responsible for the death that is going to happen in the next few days.The premier has decided to cancel all transfers out of province after today.This is going to lead to an immense amount of tragedy.This premier has lost my trust.
Unbelievable

Masri told CTV News Wednesday evening there were plans in place for “a lot more” Saskatchewan patients to be sent out east for care this week.

Dr. Michael Warner from Toronto said he expected to receive a Saskatchewan COVID-19 patient at his hospital on Thursday, but the transfer was cancelled by the Saskatchewan government.

Update:@SKGov has just cancelled transfers to ON beyond the initial 6 #COVID ICU patients already announced.

We will not be receiving a patient tomorrow.

As the #COVID19SK ICU situation has not improved, this decision is confusing.

We remain willing and able to assist. https://t.co/0J0NKZWhPp

Ontario Health executive vice president Dr. Chris Simpson told CP24 on Tuesday there are plans in place to transfer an additional six patients throughout Thursday and Friday – which would bring the total number of patient transfers from Saskatchewan to 12.

Saskatchewan Public Safety Agency (SPSA) president Marlo Pritchard responded to that statement on Wednesday morning saying that is not the case.

CTV News reached out to the premier’s office Wednesday evening to ask for clarity about the claims made by the doctors.

The statement from the government on Thursday morning not did clarify why Ontario officials believed six more patients were coming or why doctors were under the impression those additional transfers had been cancelled.

A spokesperson for the Saskatchewan government said the province will announce all confirmed ICU patient transfers through official channels.

On Thursday afternoon the province said three more patients will be transferred to Ontario in the coming days.

With files from CTVRegina.ca’s Michaela Solomon