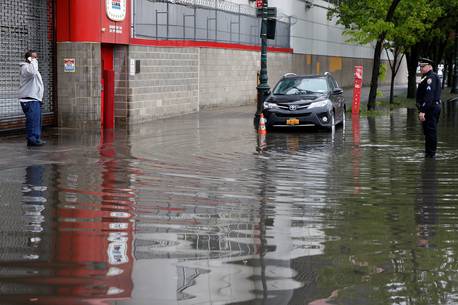 By Kate Duguid and Ally Levine

NEW YORK (Reuters) – The number of properties in the United States in danger of flooding this year is 70% higher than government data estimates, research released on Monday shows, with at-risk hot spots in Houston, New York, Los Angeles and Chicago.

The higher risk identified could have implications for property values as well as insurance rates, municipal bonds and mortgage-backed securities, according to investors and researchers at First Street Foundation, which released the data http://www.floodfactor.com.

“This could change the calculus on whether a given property is resalable, or what price you sell it at,” said Tom Graff, head of fixed income at Brown Advisory.

The data, which covers the contiguous United States, found that around 14.6 million properties, or 10.3%, are at a substantial risk of flooding this year versus the 8.7 million mapped by the Federal Emergency Management Agency (FEMA).

For a graphic showing the increased risk: https://graphics.reuters.com/USA-FLOODS/REALESTATE/yxmpjlrklpr/USA-FLOODS-REALESTATE.jpg

FEMA maps are currently used to determine rates on government flood insurance and underpin risk assessments done by mortgage lenders, investors and home buyers. The maps, however, only account for coastal flooding – not rain or rivers – and do not incorporate the ways climate change has made storms worse.

A FEMA spokesperson said that First Street’s maps build on those created by the agency and the two are not incompatible.

Los Angeles, Chicago, Houston, New York and Cape Coral, Florida top First Street’s list of cities with the most number of properties at risk. At the state level, Florida, Texas, California, New York and Pennsylvania have the most to lose. Florida and Texas also top FEMA’s list, but with significantly fewer properties estimated to be at risk.

Washington, D.C., has the greatest deviation from FEMA’s numbers, 438.4% more properties at risk, because First Street accounts for potential flooding from the Potomac and Anacostia rivers and a drainage basin under the city. Utah, Wyoming, Montana and Idaho have the next highest deviations, all between three to four times greater than FEMA estimates.

Commercial mortgage-backed securities (CMBS), investments that pool loans for office buildings, hotels, shopping centers and more, are among the securities most exposed to flood risk because of the concentration of cities on the U.S. coasts.

“There is a moral hazard within the investment community of not pricing in the risk of something like this happening,” said Scott Burg, chief investment officer at hedge fund Deer Park Road.

Nearly 20% of all U.S. commercial real estate value is located in Houston, Miami and New York, according to CoStar data, each of which has been hit by hurricanes in the last decade.

The BlackRock report concluded that 80% of the commercial property damaged by those two storms was outside of FEMA flood zones, indicating that many of the buildings hit may not have been appropriately insured.

Any floods this year could compound the effects of the coronavirus pandemic, which has sent more than $32 billion of commercial loans into special servicing – negotiations for relief in the event of a default – according to Moody’s.

“For property owners that’s like getting your arm amputated and then your head lopped off,” said Jacob Hagi a professor of finance at the University of North Carolina and a First Street research partner.

LEVIS, Que. – Desjardins Group says it has reached a $60.5-million agreement with a U.K.-based hybrid real estate agency to acquire its Canadian holding company and its two brands.

The financial group says in a statement it will acquire the brands Purplebricks Canada and DuProprio from Purplebricks Group plc.’s holding company 9059-2114 Quebec Inc.

The two companies have more than 500 employees in Quebec, Ontario, Manitoba and Alberta.

Desjardins, which is one of the largest mortgage and insurance providers in Quebec, says both will continue to be run by the existing teams.

It says the deal takes effect on Wednesday.

This report by The Canadian Press was first published July 15, 2020.

LEVIS, Que. — Desjardins Group says it has reached a $60.5-million agreement with a U.K.-based hybrid real estate agency to acquire its Canadian holding company and its two brands.

The financial group says in a statement it will acquire the brands Purplebricks Canada and DuProprio from Purplebricks Group plc.’s holding company 9059-2114 Quebec Inc.

The two companies have more than 500 employees in Quebec, Ontario, Manitoba and Alberta.

Desjardins, which is one of the largest mortgage and insurance providers in Quebec, says both will continue to be run by the existing teams.

It says the deal takes effect on Wednesday.

This report by The Canadian Press was first published July 15, 2020.

Ownership returns to CanadaPurplebricks acquired ComFree (which was rebranded to Purplebricks Canada in 2019) and DuProprio from Yellow Pages Limited in 2018. The deal announced today brings ownership of both of those entities back to Canada. Purplebricks Canada and DuProprio will continue to be run by the existing teams according to their respective business plans. Desjardins wants to keep the companies’ current employees and honour the companies’ existing contracts.

Two different business modelsBased out of offices in Hamilton, Winnipeg and Edmonton, Purplebricks Canada provides fixed-fee innovative real estate brokerage services for home sellers in Ontario, Manitoba and Alberta—provinces where the financial bar for entry into the real estate market is often high. In Quebec, DuProprio has offices in Lévis and Montreal and provides real estate services without an agent. The company is associated with more than 20% of residential real estate sales in Quebec.

Desjardins continues pan-Canadian growth“Desjardins is already the top mortgage lender and home insurer in Quebec and is one of the top three property and casualty insurers in Ontario,” says Guy Cormier, President and CEO of Desjardins Group. “Buying or selling a home is one of the biggest—and most stressful—decisions that our members and clients, and other consumers will make in their lives. As a co-operative organisation, it was a natural fit for us to acquire Purplebricks’ holding in Canada, present in four different provinces and sharing Desjardins’s strong member and client culture. Through our competitive mortgages and thanks to this acquisition, we will keep on supporting people, whether they choose a commission structure, a fixed-fee service or support without an agent,” says Cormier.

Good news for Canadian onwnership“It’s great news for our company, our clients and our employees to have ownership of the company back in Canada,” said Randall Weese, licensed Broker of Record, who oversees the customer service and compliance departments at Purplebricks Canada. “Desjardins is a strong cooperative financial group and we’re excited to be joining the family. Our services were created to be a modern and practical alternative to traditional real estate brokerage services. We help Canadians buy and sell and save thousands in commission fees while offering cutting-edge technology and exceptional service. With Desjardins, we’re going to continue our work helping consumers get the most out of the sale of their property.”

About Desjardins GroupDesjardins Group is the leading cooperative financial group in Canada and the sixth largest in the world, with assets of $326.9 billion. It’s the leading mortgage and home insurance provider in Quebec and a top three property and casualty insurer in Ontario. It has been rated one of Canada’s Top 100 Employers by Mediacorp. Desjardins meets the diverse needs of its members and clients by offering a full range of products and services to individuals and businesses through its extensive distribution network, online platforms and subsidiaries across Canada. Ranked among the World’s Strongest Banks by The Banker magazine, Desjardins has one of the highest capital ratios and credit ratings in the industry. In 2015, Desjardins acquired the Canadian operations of US mutual State Farm.

About Purplebricks Canada Purplebricks is a full-service real estate brokerage providing Canadian home sellers and buyers with the best REALTOR® expertise and customer service, supported by cutting-edge technology. Sellers save tens of thousands of dollars using our fixed fee service, rather than paying a commission based on the value of their home, and home buyers receive thousands in cash back. Purplebricks operates in Ontario, Alberta and Manitoba.

REALTOR®. Member of the Canadian Real Estate Association and more.

About DuProprioThanks to its devoted team, DuProprio pursues the mission of providing to Quebec homeowners the support and services they need to sell their property without commission. Over 300,000 consumers have sold their property through DuProprio’s services since it was founded in 1997. Today, DuProprio features the most liked real estate site in Quebec, showcasing over 20,000 properties for sale.

21 new cases of COVID-19 detected in BC Wednesday, no new deaths – CBC.ca