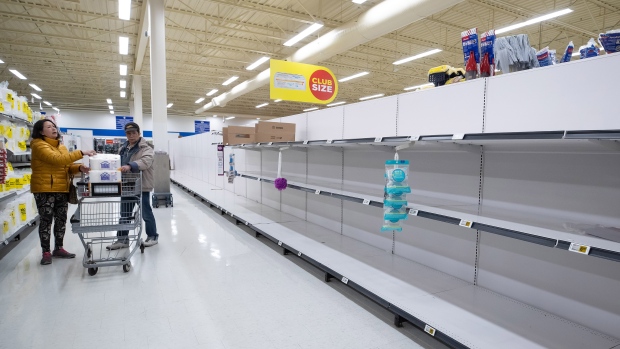 EDMONTON —
Many Canadians were not prepared for the COVID-19 pandemic, but Dave MacDonald wasn’t one of them.

While some people rushed to stores to buy toilet paper and food, MacDonald was living peacefully at his remote home in southern Manitoba with his wife and two sons.

They live “off-grid” near the town of Lac du Bonnet and grow about half their own food in their backyard. MacDonald also hunts.

“I can use snow, leaves or my hands. Snow is most stimulating.”

MacDonald is a part of a growing community of survivalists or “preppers,” who ready themselves for possible catastrophes that could crumble governments and infrastructure.

Some say they have noticed an uptick in interest in the movement since the pandemic began.

MacDonald, who teaches survivalist courses, also had a long career as a search-and-rescue specialist with the Royal Canadian Air Force.

“People get themselves into trouble because they figure, ‘Oh, that’s never gonna happen to me.’ And then when it does happen, because it does happen, they’re not prepared.”‘

COVID-19 is one of those events that people weren’t prepared for, says MacDonald, who believes that’s why many have enrolled in his International Canadian School of Survival.

He teaches firearm training and basic survival skills such as food rationing, land navigation and building fires. The number of students in his courses have doubled — and in his online classes they have quadruped — since the pandemic began.

Some survivalists may be prepping for the end of the world, but for MacDonald it’s about being prepared.

Ryan Pearce, 35, of Saskatoon doesn’t live off-grid. He says he is a hobbyist who enjoys learning bush craft.

His online group called “Preppers & Survivalists of Canada” has more than 6,000 members. Since the pandemic began, the group has seen a 50 per cent increase in participants, he says.

“Some of them are moms asking, ‘How do I refrigerate my meat like our grandparents used to do?’ or just preparing food out of your gardens or hunting,” Pearce says.

Jonathan Rawles is a co-founder of a website called Survival Realty based in the United States.

More Americans and Canadians are buying remote properties in rural Alberta and British Columbia, he says.

“Since the coronavirus pandemic and panic started, we’ve seen our web traffic for interest in rural off-grid remote survival properties double,” Rawles says from his home in Idaho.

Many buyers are attracted to the simple way of living that survivalism offers, he adds.

“We see people concerned about the virus being in a densely populated city. But then we also see people who now have freedom to relocate and live where they want to be because of remote work,” Rawles says.

“And so this has been something that’s really pushing people to make changes perhaps they’ve been intending to or wanting to for a long time.”

The Canadian government recommends people be prepped for at least a 48-hour disaster, MacDonald points out.

“You should be prepared to scoop your family and move out of an area if there’s a natural or man-made disaster. And then you need to sustain yourself for 72 hours and hope for the best, yet prepare for the worst.”

This report by The Canadian Press was first published Dec. 29, 2020.

Over 15,000 people have died from coronavirus in Canada – Global News