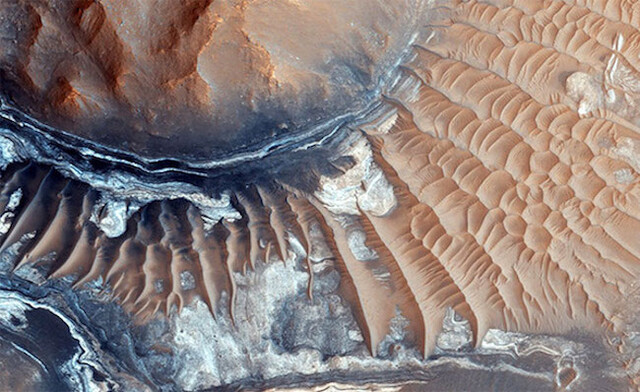 With Mars now the most intensively explored planet in the Solar System after ours, it is not surprising that we are continually having to review our ideas and preconceptions.

The Red Planet continues to challenge our imaginations.

The mainstream idea is that originally Mars had lots of water, but being a smaller world, with weaker gravity, and losing its magnetic field early on, its atmosphere and water got lost to space, leaving a cold, dry desert world.

Now, it looks as though we could be seriously wrong in our assumption that Mars is now a dried-up world.

Current estimates are that around three billion years ago, when life was first getting started in the Earth’s oceans and possibly on Mars too, there was enough water on Mars to submerge the whole planet to a depth of between 100 and 1000 metres.

By comparison, if our Earth were a smooth ball, the existing oceans would cover it to a depth of well over 2000 metres. Mars once had a lot of water; by about a billion years ago, it had disappeared.

There are three places the Martian oceans could have disappeared to.

At some point in our high-school science career most of us have heated copper sulphate.

As we warmed it, those nice blue crystals turned into white powder and water came off as steam. Before we applied the heat the crystals were perfectly dry.

The water molecules were locked up inside the crystals as part of the chemical. There are many minerals that similarly lock up water.

The first rocks on Mars would have been volcanic. However, Mars, like Earth, was then a wet world, with rain and other weather.

On Earth, rocks are continually attacked and broken down, a process we call weathering. The situation on Mars would have been the same. In the process, minerals in the rock become new minerals that contain water, such as clays.

From observations done from orbit and on the Martian surface, it looks as though there is a lot of water tied up in hydrated minerals.

Apart from our interest in this information in helping us understand the history of the planet in the Solar System most like ours, it also is important regarding our plans to have long-term manned bases, or even colonies on Mars.

The red surface of Mars indicates iron oxides, which contain oxygen. In addition, we can use solar-generated electricity to liberate oxygen from water.

Given that current space technology means Mars is always many months away, the more self-sufficient our bases are for the key needs of energy, water and oxygen, the less dependent they will be upon Earthly support, and the more secure they will be in the long term.

Moreover, the more water there is, the better the long-term prospects of terraforming the planet.

Before messing with the Martian environment, we need to know whether there are living things on the planet. The last thing we would want to do is render their world uninhabitable to them.

The presence of water tied up in minerals rather than just frozen solid offers easier prospects for Martians to make a living, because water is an important component in extracting useful chemicals from their surroundings, maybe, as is the case on Earth, with the help of the Sun.

It is true that the solar ultraviolet radiation level on the surface of Mars is dangerous to us, but that radiation has a lot of energy in it, and there is no reason Martians, if any, will be like us.

Whistler, Revelstoke, and Big White Close Due to COVID | Outside Online – Outside Magazine

The first footprints were found in a dry lake bed in White Sands National Park in 2009. Scientists at the U.S. Geological Survey recently analyzed seeds stuck in the footprints to determine their approximate age, ranging from around 22,800 and 21,130 years ago.

The findings may shed light on a mystery that has long intrigued scientists: When did people first arrive in the Americas, after dispersing from Africa and Asia?

Most scientists believe ancient migration came by way of a now-submerged land bridge that connected Asia to Alaska. Based on various evidence — including stone tools, fossil bones and genetic analysis — other researchers have offered a range of possible dates for human arrival in the Americas, from 13,000 to 26,000 years ago or more.

The current study provides a more solid baseline for when humans definitely were in North America, although they could have arrived even earlier, the authors say. Fossil footprints are more indisputable and direct evidence than “cultural artifacts, modified bones, or other more conventional fossils,” they wrote in the journal Science, which published the study Thursday.

“What we present here is evidence of a firm time and location,” they said.

Based on the size of the footprints, researchers believe that at least some were made by children and teenagers who lived during the last ice age.

David Bustos, the park’s resource program manager, spotted the first footprints in ancient wetlands in 2009. He and others found more in the park over the years.

“We knew they were old, but we had no way to date the prints before we discovered some with (seeds) on top,” he said Thursday.

Made of fine silt and clay, the footprints are fragile, so the researchers had to work quickly to gather samples, Bustos said.

“The only way we can save them is to record them — to take a lot of photos and make 3D models,” he said.