TORONTO— The Idle No More movement was a high-water mark for contemporary Indigenous activism across Canada. It was also the catalyst for grassroots entrepreneur Jay Soule who was inspired to act in a creative way.

“When Idle No More kicked off, I felt I needed a change from what I was doing,” he said. “I did some research and watched what was going on.”

Simple and direct, his imagery resonates with many consumers of his t-shirts and paintings. But it was a long road to arrive at his current status as a sole proprietor of business and a creator of unique designs.

Originally from the Chippewas of the Thames First Nation, he was adopted and raised in a non-Indigenous family that he left at the age of 16. Admittedly, it was not an ideal situation and it led to a rugged life on the streets that fostered a level of awareness that unwittingly set a path to entrepreneurial opportunities.

“I learned tattooing in Florida and then in England in 2001,” he said. “I had some friends there, so I went to hang out with them.”

His struggles growing up existed outside of the Indigenous community.

Soule recently opened a retail store front, studio and tattoo parlour called Chippewar Nation on Toronto’s famed Queen Street West, an area renowned for its alternative arts and music scene. Prior to occupying his current location, Soule operated a store further up the street at Queen and Bathurst for 14 years.

“I got business development loans through my reserve and support from backers who believed in what I was doing,” he explained.

“I ran a silk screening business for a long time, so I’ve been at this a while, learning the ropes of running a business and dealing with all the aspects that it involves,” he said.

The walls of Soule’s shop showcase paintings and silk-screened apparel adorned with his original designs.

There has to be a diverse effort to bring everything together far beyond a brick-and-mortar location.

“It’s the pow wow trail, online presence, travelling to art shows,” he said. “You have to be out there engaging the public. It’s not one thing. It has to be a push engaging all of them to be successful.”

Soule’s images have appeared in catalogues and exhibits for Toronto’s all Indigenous imagiNative film festival.

“I showed paintings with them for three years including the Movie Monster series, the Cult Classic series and the Tool Kit for Revolution,” he said.

Though his Indigenous imagery might be perceived as activist based, Soule’s perspective is not as obvious.

“I wouldn’t say that my work is political. I’m just stating the obvious,” he said. “I’m reacting to what I see around me and I’m learning about what’s going on in the community – things that need a spotlight and I’m simply contributing to that effort.”

His next steps involve filmmaking and larger pieces in murals. But his determination is unbowed, and serves as an example for upcoming entrepreneurs.

“My success has come from more than 15 years in the industry,” he said. “If someone wants to do this, it’s all about hard work being original in order to achieve your goals.”

It was a throwback to the golden age of cinema for the 2021 Wood Buffalo Excellence in Arts Awards, known as the Buffys, as the pre-recorded show streamed online on Saturday night.

The Buffys give the local arts community a chance to come together and celebrate their work. This year’s theme was Midnight in Technicolor, and featured performances that ranged from dance, music, comedy, spoken word poetry and theatre.

The theme was based on the technicolor movement in film, which was known for its bright, bold and saturated colours. Bridging the show were sketches that followed hosts Hue Slider and Nat Valens, played respectively by Timothy Heggie Helen Killorn, and Luma the Technicolor cat, voiced by puppeteer Brandon Folmer.

The pandemic kept the awards online for a second year, with small viewing parties held around the municipality.  Last year’s Buffys had more than 14,000 unique viewers from streaming and traditional media. Will Collins, communications manager for Arts Council Wood Buffalo (ACWB), believes this year will eclipse that number.

“It’s a very special event because it brings the entire community together through art,” said Collins. “Typically these artists don’t work together. The Buffys is really a celebration of all these different artists but is also an opportunity for everyone to work together on a collaborative project.”

The physical awards are also works of art. Created this year by Michelle Ploughman, also known as Saltwater Potter, 14 individualized vases were made for each award category. The design for the awards was inspired by the boreal forest.

The awards also honoured the legacy of the late Joey Delusong, a local musician who died in 2015, with a posthumous lifetime achievement award. Known on stage as Joey D, Delusong was known across the community for his ability to inspire musicians through his songwriting and performances.

“He just had a really special energy about him that was about bringing people together through a positive attitude,” said Collins. “And he had, for lack of a better term, no shame. He would go up and really have a blast.”

Other award recipients included Andrew Pottie for Arts Champion, Matthew Lorenz for Media Arts, Amy Keller-Rempp for Indigenous Arts and Theatre; Just Because for Performing Arts. Diya Hiltz, who received the Rising Star award for her musical theatre and classical singing performances, said in the broadcast that there are countless reasons why the arts are important.

“One of the main reasons being art is so unique and different for everyone,” said Hiltz. “No one’s form of art looks the same, no one’s voice sounds the same. I think that’s why it’s so special and can truly inspire individuals to do great things with their lives.”

Cathy Larson, a music teacher in the Fort McMurray Catholic Schools Division, received the award for Arts Education. Larson said in the broadcast that her students were a big component of her love for music.

“What I’m inspired by is the students I teach every day,” said Larson. “They inspire me to be the best I can be as a teacher and provide the best environment I can for them.” 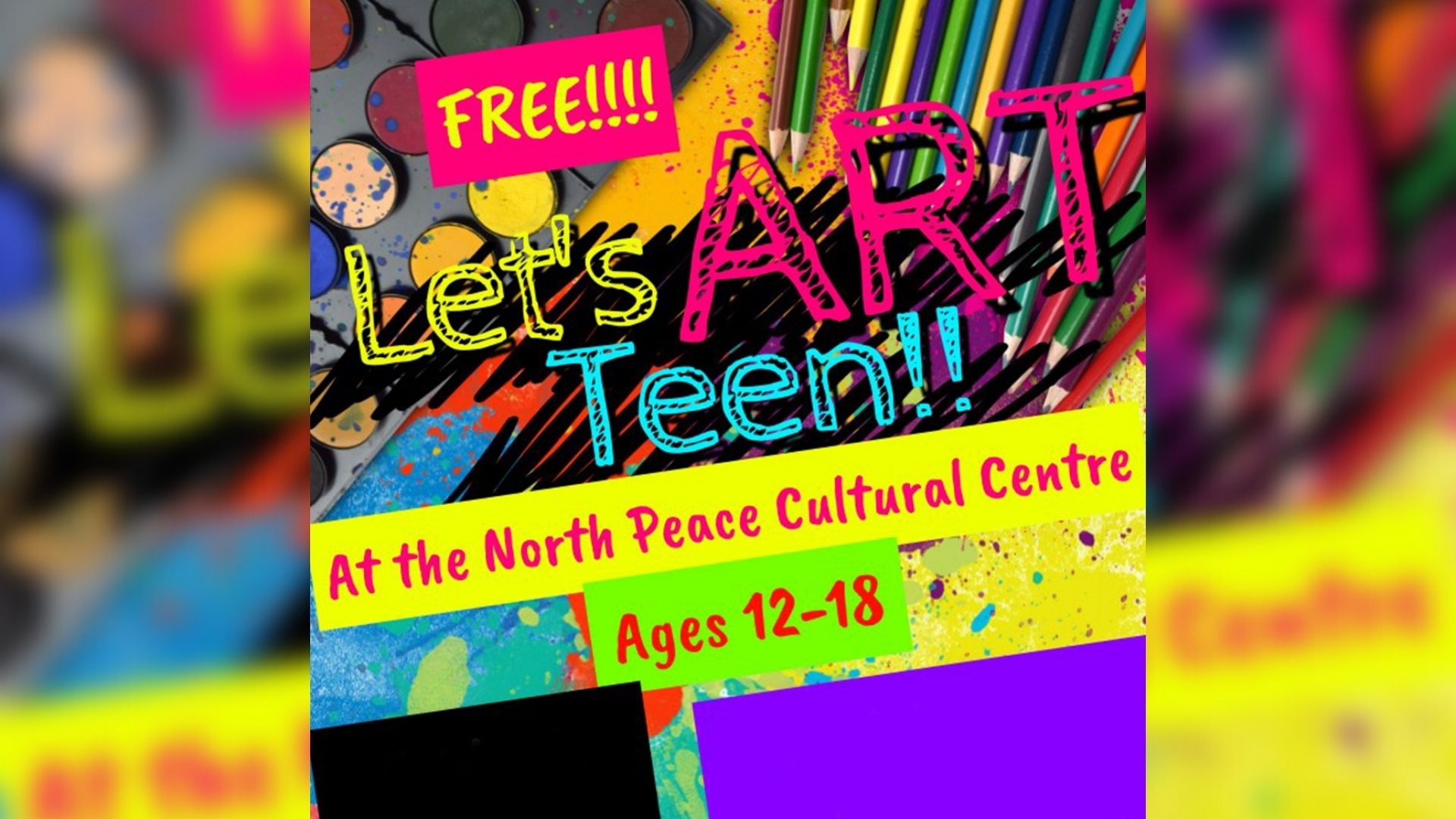 Registration is required for the program, which can be done by calling the NPCC at 250-785-1992 or emailing reception@npcc.bc.ca.

The program is also offered for kids aged six to 12, however, the 2021 session took place in March.

The 2021 Sunshine Coast Art Crawl kicks off Friday, Oct. 22 at 10 a.m., with 164 venues open to visitors until 5 p.m. all three days, through Sunday. And at 10 of those venues (as of press time), Friday evening from 7 to 9 p.m. will also be a time for celebration. Most of the partying is at Gibsons venues, but Redecor + Design (venue #111) on Cowrie Street in Sechelt will also be open, as are Halfmoon Bay venues The Mink Farm Gallery (#146), and Kito Tosetti (#147). Details are at the “Friday Night Parties” link at sunshinecoastartcrawl.com.

The Sechelt Hospital Foundation’s Art of Healing campaign holds its Gala on Saturday, Oct. 23 at the Sunshine Coast Botanical Garden (venue #126). That’s where 36 works donated by some great local artists are on display and will be distributed in an exclusive online raffle draw to 36 ticketholders. All visitors to the exhibit can also bid on auction packages, and purchase raffle tickets for the grand travel prizes, among them a grand prize of a trip for two to Venice or any other European destination.

It’s also the final weekend of the Sechelt Arts Festival, with the premiere of the play, Voices, at Raven’s Cry Theatre. There will be three performances, Friday night, Oct. 22, Saturday night, and a Sunday matinee. The visual art and heritage canoe displays at Seaside Centre become Art Crawl venue #115. Poet Valerie Mason-John speaks in a free event (registration required) at Raven’s Cry on Saturday at 11:30 a.m. And your last chance to add your touch to the Paintillio mural at Trail Bay Centre will also be on Saturday, until 4 p.m. Info and tickets at the festival website.

The Sunshine Coast Writers and Editors Society is holding its first meeting on Friday, Oct. 22 at 7 p.m., via Zoom. The society’s purpose is “to serve writers, editors and groups on the Sunshine Coast to grow and develop their skills, as well as support other writers’ groups and events in the province and across Canada,” and “to hold events and launch projects to highlight the incredible talent that exists on the Coast.” Contact Cathalynn Cindy Labonte-Smith at 604-724-3534 for a Zoom link.

Writer Jennie Tschoban will be signing copies of her funny and touching memoir, Tales & Lies My Baba Told Me, on Saturday, Oct. 23, from 1 to 3 p.m. at Daffadowndilly Boutique & Gallery, on Marine Drive in Gibsons.

On Sunday, Oct. 24 starting at 2 p.m., Jennifer Bryant and Jennifer Ireland will talk about their new exhibit, Matters of Scale, on now at the Sunshine Coast Arts Council’s Doris Crowston Gallery in Sechelt.

The band Astral Motion bring their blend of originals and classics to Roberts Creek Legion on Friday, Oct. 22 at 7 p.m. On Saturday, Oct. 23 at the Creek Legion, Vancouver acoustic band Farmteam start their sets at 7:30 p.m.

The Locals play the Turf Stage at Tapworks in Gibsons on Saturday, Oct. 23, 2:30 to 4:30 p.m. On Wednesday, Oct. 27, Vancouver singer-songwriter Eamon McGrath plays Tapworks at 8 p.m.

At the Clubhouse Restaurant in Pender Harbour, catch Half Cut and the Slackers on Sunday, Oct. 24, from 2 to 5 p.m.