The lack of a mandatory mask policy in Lambton County has led to some confusion at the local hospitals.

The county, under guidance from its council, opted to encourage wearing masks in indoor settings rather than mandate it.

“Because we haven’t (made it mandatory) we’ve had several individuals come to the hospital and refuse to wear masks,” Julia Oosterman, Bluewater Health’s communications chief, said Sunday. “It’s hospital policy.”

The issue has been polarizing across the province, with regions making different decisions as they advance into the third stage of the province’s reopening framework.

Regardless, Bluewater Health, with hospitals in Sarnia and Petrolia, requires all patients and visitors to wear masks because of the ongoing global pandemic. This will continue to be the case despite the organization not having a COVID-19 patient for nearly five weeks.

“That’s amazing,” Oosterman said. “But we’re not out of the woods.”

The hospitals have been continually ramping back up and offering elective procedures and surgeries after the Ontario-ordered spring shutdown. They’re now at about 80-per-cent capacity.

“That’s where we’re trying to stay right now as part of the province’s guidelines and mandates so that we could ramp up if we get into a surge or a crisis situation like a sudden influx of COVID,” she said.

But all of the operating rooms are being used.

“In fact, we’re trying to run out surgeries even more than a hundred per cent of our traditional pre-COVID,” Oosterman said. “Because running at a hundred per cent just means that we’re keeping up to date with now, but we need to actually make up the backlog.”

But some patients are still hesitant to come into the hospitals because of the pandemic, something Dr. Michel Haddad, Bluewater Health’s chief of staff, recently discouraged. Oosterman said that continues to be a problem.

“And the reason it’s a problem (is) it’s not just about today,” she said. “I think that we’re in a valley between two mountains, two spikes. And if people continue to wait then they might wait right into the next spike. So then their three-month delay has now potentially become six, nine, ten months. In some cases that can be quite harmful for their clinical outcomes.”

Testing across Sarnia-Lambton has now eclipsed 15,000, with just 1.9 per cent – a slight drop from the previous day’s report – coming back positive. A total of 260 people have recovered from the virus and 25 have died.

The majority of Ontario advanced Friday into stage three of the province’s reopening framework, but Lambton was one of 10 regions held back. Local officials anticipate an announcement could be made on their status early next week.

Comet Neowise is bright and easy to see now

A new map of the Milky Way created by the National Astronomical Observatory of Japan shows Earth is spiraling faster and is 2,000 light years closer to the supermassive black hole at the center of our galaxy than was previously thought.

Sagittarius A* and black holes of the like are dubbed “supermassive” for a reason — they are billions of times more massive than the sun.

But the NAOJ said there is no need to worry, as the latest data does not indicate the planet is “plunging towards the black hole.” It just means there is now a “better model of the Milky Way galaxy.”

Positioning indicates that Earth orbits the Galactic Center, where the black hole is located, at 227 km/s. Astronomers originally thought the orbit was at a speed of 220 km/s.

“Because Earth is located inside the Milky Way Galaxy, we can’t step back and see what the Galaxy looks like from the outside,” NAOJ said in a press statement. “Astrometry, accurate measurement of the positions and motions of objects, is a vital tool to understand the overall structure of the Galaxy and our place in it.”

VERA, Very Long Baseline Interferometry Exploration of Radio Astrometry, was created in 2000 and uses interferometry to aggregate data from radio telescopes located throughout Japan. Through the project, scientists can create the same resolution as a 2,300 km diameter telescope, which “is sharp enough in theory to resolve a United States penny placed on the surface of the moon,” NAOJ said.

NAOJ scientists are hoping to gather data on even more objects, with a focus on those that are close to Sagittarius A*. 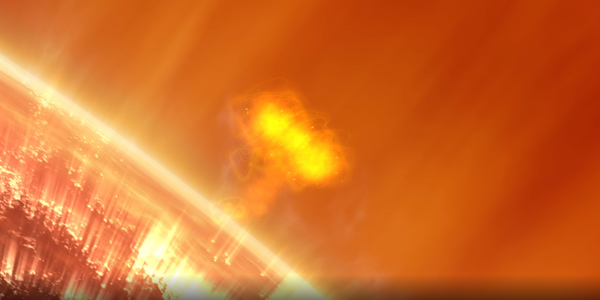