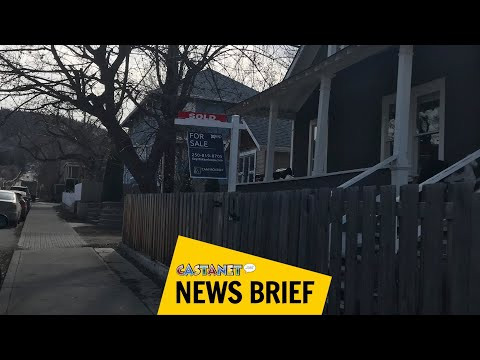 The real estate market is staying very hot, and it doesn’t appear to be trending down any time soon.

For February 2021, the Kamloops And District Real Estate Association (KADREA) reported a total of 283 residential unit sales by the Kamloops & District Multiple Listing Service (MLS). That is a 37.4 per cent increase in sales from last February.

Typically, February is a slow month for Realtors, as usual trends have the market slow.

“That’s a trend I used to look at. They look at what they call the ‘seasonally adjusted average’ but because of last year with the pandemic, March until end of May things shut down,” Aaron Krausert, a Director on the Board of KADREA, told Castanet Kamloops. “So all those typical trends on the graphs I like to nerd out on, everything is out the window it seems.”

“It doesn’t matter what month it is, buyers are just jumping.”

There were 349 new listings recorded by the Kamloops MLS last month and as of March 3, there were 587 active listings in the Kamloops and district region.

And still, it doesn’t seem to be enough.

“Literally everything is selling at all time record pace. There is something called the absorption rate, which is the idea of if there were no new listings starting today, how long would it take at the current rate of sales for all the inventory to be absorbed (sold) into the market,” Krausert explained. “And right now it’s under four months.”

“That means, no new listings, everything in the market will be done in just over three months.”

Even with the construction on new builds and plots, in this sellers market, there don’t seem to be enough residences to go around, with many seeing multiple offers.

And so if you are looking to buy at this time, there are four things you absolutely need when bidding on a house.

“Buyers need a pre-approval, in writing, down payment on hand, short subject removal period and hopefully not subject to sale, because that’s not attractive in a multiple offer scenario.”

OTTAWA (Reuters) -Buyers are turning up the heat on Canada‘s searing hot housing market, their frenzy leading to record sales, prices and starts, but in a budget unveiled on Monday the federal government did little to tamp down the fire.

“The idea here is that homes are for Canadians to live in. They are not assets for parking offshore money,” Freeland told reporters.

For those watching, it was nowhere near enough.

“It’s like a squirt gun next to a towering inferno,” said Doug Porter, chief economist at BMO Capital Markets.

“We need to break the psychology that real estate is this can’t lose investment that only goes up,” he added. “Before this turns into a full-on bubble.”

While the Bank of Canada has become increasingly vocal on the issue, it has also pledged to keep interest rates at record lows into 2023. It will update its forecasts Wednesday.

And most measures that would cool the frenzy are up to the provinces and federal government who remain cautious as a third wave of COVID-19 rages.

Real estate agents say more listing are now coming to market, but they still see a massive long-term shortage. They expected more than the 35,000 units pledged in the budget.

“It’s not going to do much to intervene in the activity level we’re seeing now across the country,” said Christopher Alexander of RE/MAX Ontario-Atlantic.

Canada housing starts up 21.6% in March to new record – CMHC

The seasonally adjusted annualized rate of housing starts rose to 335,200 units in March, well ahead of analyst expectations for 250,000 units, and a new high for all months on record.

“The big acceleration came as weather was unseasonably warm in many parts of the country,” Royce Mendes, senior economist at CIBC Economics, said in a note.

Mendes added that new home construction will likely be a major contributor to overall GDP growth again in 2021, even as building activity cools off from the “torrid pace” of recent months.

A supply imbalance has been blamed for skyrocketing home prices through the pandemic, though new listings surged in March, which, coupled with strong starts, suggests a more balanced market could be coming.

“Red-hot demand for real estate propelled a record month for housing starts in March. While the market will need a long stretch of supply growth to have a meaningful effect on prices, the March numbers are a solid start,” said Shelly Kaushik, an economist with BMO Capital Markets in a note.

Canada‘s ruling Liberals are set to unveil their first full budget in two years on Monday, with billions in pandemic supports as COVID-19 infections skyrocket, a national daycare plan and new taxes on luxury goods.

(Reporting by Julie Gordon in Ottawa; Editing by Toby Chopra and Jonathan Oatis)

The industry group said actual sales, not seasonally adjusted, rose 76.2% from a year earlier, while the group’s Home Price Index was up 20.1% from last March and up 3.1% from February.