Provincial court locations across the island have been closed to the public until further notice, in light of the Alert Level 5 lockdown announced Friday evening by the chief medical officer.

The court announced changes to operations in St John’s when Friday’s COVID-19 numbers were announced and was swift to expand those changes after news later in the evening that the current outbreak is associated with a particularly transmissible strain of the virus. Dr. Janice Fitzgerald, chief medical officer of health, has announced the strictest level lockdown as a result, in an effort to slow the virus spread.

As of Feb. 15, public access to all provincial courthouses is unavailable. Anyone requiring assistance with an urgent matter is asked to call their local courthouse.

All adult and youth criminal appearances, trials, hearings and sentencings for accused who are not in custody scheduled for the period between Feb. 15 and March 12 will be rescheduled for four weeks from that date. Newly scheduled dates will be posted on the court website.

For those in custody, bail hearings, virtual appearances from prison, sentencings, preliminary inquiries, trials and youth criminal sentence reviews will take place by phone or video.

All civil matters and non-emergency family matters scheduled for the period between Feb. 15 and March 12 will also be rescheduled for four weeks’ time and participants will be contacted regarding a new date. Emergency matters like child/adult protection and family emergency proceedings will take place virtually.

All Traffic Court matters scheduled within the same time period will be adjourned indefinitely. Fine payments can be made online, by phone or mail, according to information printed on the back of the ticket. Payment extensions, adjournment requests and not guilty pleas can be made by contacting the local courthouse. Failing to notify the court of an intention to contest a matter by mail, e-mail or fax will result in a conviction.

The Supreme Court of Newfoundland and Labrador has also issued an updated operations plan in light of the COVID-19 outbreak and lockdown. All criminal, family and civil matters scheduled for the week of Feb. 15-19 , both in-person and virtual, will be adjourned. Exceptions include matters the presiding judge directs will go ahead – in which case participants will be notified – as well as bail hearings, bail reviews where the accused is in custody, and detention reviews. Participants in postponed matters will be notified of the new court date.

Urgent and emergency matters, including child protection, applications related to medical decisions or wrongful removal of a child, applications to preserve property or assets, warrants until the Child, Youth and Family Services Act and new applications under the Adult Protection Act, will proceed. Those seeking an emergency hearing should contact the court.

“The Supreme Court will continue to monitor the COVID-19 situation across the province to determine whether any further changes to operations are requires,” Chief Justice Raymond Whalen wrote in the announcement. “An update will be provided next week.”

The Supreme Court is suspending normal operations in all Judicial Centres (General and Family Division) across the Province for the week of Feb 15-19, 2021. Essential public service will be maintained. More details @ https://t.co/ggp2fo6LAA 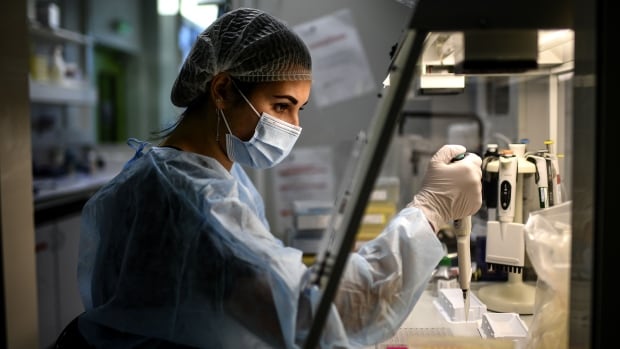 That rate dropped from 4.6 per cent to 4.3 Thursday — the lowest announced since Oct. 20, when it was at the same spot. Winnipeg’s rate dipped to 3.8 per cent from four a day earlier.

A man in his 70s from the Winnipeg health region died, bringing the province’s total number of coronavirus-linked deaths to 888.

Most of the new cases on Thursday are split between the Winnipeg health region, which has 31 cases, and the Northern Health Region, with 30, the province says in a news release.

No new cases of the more infectious B117 coronavirus variant first detected in the U.K. have been identified in Manitoba since one was announced on Tuesday, bringing the province’s total to five.

Strict public health orders on Pauingassi First Nation, about 280 kilometres northeast of Winnipeg, have been lifted now that the risk of COVID-19 spreading in that community has stabilized, the release says.

The fly-in community of about 500 people brought in stay-at-home orders at the start of this month when nearly one in every four people there tested positive for the illness.

All Manitoba’s other public health orders are still in effect.

The province has now received more than 100,000 doses of COVID-19 vaccine, according to its online dashboard.

So far, 2.6 per cent of Manitobans over 18 have gotten both their shots, with 47,920 more immunizations planned over the next 28 days, the dashboard says.

There are now 196 COVID-19 patients in hospital in Manitoba, a drop of 11 since Wednesday. Twenty-six of those people are in intensive care, down by three.

Three previously announced COVID-19 cases were removed from Manitoba’s total on Thursday because of a data correction, the release says. That brings the number of cases identified in the province so far to 31,657.

Of those cases, 29,563 people are considered to have recovered from the illness, while 1,206 are still deemed active — a number health officials have said may be inflated by a data entry backlog.

There were 2,290 more COVID-19 tests done in Manitoba on Wednesday, bringing the total number of swabs completed in the province to 519,892 since early last February.

York Region, which moved to the red zone this week, saw 94 new cases

Testing confirmed an additional five cases of the United Kingdom variant, known as B.1.1.7, for a total of 405 variant of concern (VOC) cases.

Nine more deaths were linked to the pandemic, bringing the total number of lives lost to 6,893.

Of the three regions still under a stay-at-home order Wednesday, Toronto reported 363 new cases, Peel Region 186 and North Bay-Parry Sound had one case.

York Region, which moved to the red zone this week, saw 94 new cases.

Each of the province’s 34 public health units is being asked to come up with a plan to deliver vaccinations.

For instance, Peel Region is planning to set up three large vaccine clinics — one each in Brampton, Caledon and Mississauga — but no appointments were being booked as of Wednesday.

Peel confirmed 45,300 doses given out so far which included over 15,500 in long-term-care (LTC) homes and retirement homes.

Meanwhile, Ontario optometrists say they have been rejected after offering to administer the vaccine.

Ontario veterinarians were recently added to the list of health-care professionals to administer the vaccine, alongside doctors, nurses and pharmacists,” a statement from the Ontario Association of Optometrists released Wednesday said.

“The question is, why have optometrists not been included since they work with patients on a regular basis and many already have had injection training as part of their professional curriculum?”