LOS ANGELES (Reuters) – From billion-dollar blockbuster “Joker” to one of Quentin Tarantino’s highest-grossing films, many of this year’s Oscar best-picture nominees have drawn crowds to the box office.

It is the second straight year that Academy Awards voters have spotlighted widely seen movies, bucking a trend toward honoring independent films like “Moonlight” and “The Hurt Locker” that played to smaller audiences in art house theaters.

Six of nine contenders for the film industry’s most coveted trophy, which will be awarded on Sunday, have grossed more than $100 million worldwide, according to data from Box Office Mojo. Dark comedy “Joker,” from AT&T Inc’s Warner Bros, leads the pack with $1.07 billion.

Next is the $389.3 million for Tarantino’s love letter to 1960s Tinseltown, “Once Upon a Time in Hollywood,” released by Sony Corp’s 6758.T> film studio. That ranks as the second-biggest box office take of Tarantino’s career.

“It’s been a heartening year in that way,” Willmore said. “It felt counter to the narrative that the only movies people really turn out to see in larger crowds are franchises.”

Past honors for smaller films had stoked concern that the Academy of Motion Picture Arts and Sciences was out of touch with movie audiences and that its choices where hurting TV ratings for the Oscars telecast. When “Moonlight” was named best picture in 2017, it had sold just $22.3 million worth of tickets in the United States and Canada.

Oscars organizers considered creating a best “popular” film category for the 2019 awards ceremony. They dropped the idea after a backlash that it would establish a two-tiered system of popular and what might have been seen as “unpopular” fare.

This year’s nominees feature two movies from Netflix Inc , “Marriage Story” and “The Irishman.” The company does not reveal how much money its films earn in theaters but has said that Mafia epic “The Irishman” is a hit on streaming.

More than 26 million Netflix accounts streamed at least 70 percent of the film over the first seven days, Chief Content Officer Ted Sarandos said in December. He projected that figure would reach 40 million over 28 days.

Netflix has not released figures for divorce drama “Marriage Story.” Both movies are still playing in theaters and streaming on Netflix.

Even the Korean-language film “Parasite,” a dark satire about inequality and best picture nominee this year, has lured audiences to movie houses. It has collected $163.3 million at ticket windows around the world.

“You have a case of a foreign language film that has crossed over and become an incredible success and just a buzzed-about phenomenon,” Variety film critic Owen Gleiberman said.

City now expects cost of art gallery soil cleanup to be 'at the low end' – Tbnewswatch.com

Rob Buchanan walks down alleys instead of sidewalks.

One day he was struck by the similarity between an alley in down town Revelstoke and the Louvre in Paris, France.

So he pitched hanging art in alleys to the LUNA organizing committee.

Unfortunately, it was the first year of LUNA, and though they loved the idea, they parked it.

A few years later the success of LUNA had grown and the planning committee was discussing permanent art installations as LUNA Legacy projects. Add a funding opportunity to the mix and Art Alleries went from a vision to a reality.

Featuring contemporary landscapes in gold frames in one alley and pop art assembled from old skis across the street done by Buchanan, the pieces are lit at night with solar powered lights and have been build to withstand the elements.

“For the first year of the project, because it was a new thing and there were so many details to work out, the actual art was about five per cent of the project,” said Buchanan.

He had a team of electricians figuring out how to light the pieces, a framer in Kelowna, a team of fabricators in Quebec, couriers, carpenters and installers.

One of the goals with the project is that the art pieces are able to withstand the elements and last ten years. This proved to be a complicated problem to address, Buchanan said. The paintings he created had to be transferred to powder coated aluminum panels, which is a highly technical process.

Another aspect of the project was environmental friendliness. The gold frames are made from saw dust and recycled bottles, the aluminum can be recycled and the skis are used.

“Not everything will be like that, but if we try to take a cradle to grave approach to the whole project, including the lights and the energy production for the lights, I think that is what we are after,” Buchanan said.

As far as they know, art being displayed in alleys is not being done anywhere else said both Buchanan and Miriam Manley, executive director of the Revelstoke Arts Council and member of the LUNA organizing committee.

They have visions of the project expanding to other places and Manley said while walking in downtown Kelowna she couldn’t help but notice the interesting alleys.

READ MORE: What’s in a name? The story of Mt. Begbie

The LUNA organizers will be searching for the next artist to create Phase 2 of the project in the coming months. Now that Buchanan has forged a process that works, they are opening up the project.

Artists across the Columbia Basin are welcome to apply, however, priority will be given to artists with a Revelstoke connection.

Buchanan said this is a way to build community ownership and pride for the project as well as supporting local artists.

The vision for the project is to have each alley exhibit differently themed art, like how the Museum of Modern Art has separate floors for different styles and movements, Buchanan said. There will be a walking route for people to take, and a website or pamphlet describing the pieces, just like if you were at a gallery.

The official artist call out will be coming soon. For more information email the organizers at lunaartfest@gmail.com

The art brings people into places that are usually dark and quiet. (Rob Buchanan photo)

This year’s jury selected the winners out of 273 submissions that came from artists, architects and designers worldwide. The installations, which are curated around the theme “Beyond the Five Senses,” are on display on Woodbine Beach until March 31.

Check out photos and descriptions of each installation below.

Cristina Vega and Pablo Losa Fontangordo’s Mirage is a thin, circular structure that reacts to movement from the sun. It will appear red or bright yellow depending where you stand.

Charlie Sutherland’s Kaleidoscope Of The Senses covers the sensorial theme with clean lines. The structure comprises a bell tower that makes clanking sounds, a diagonal chimney emits aromas from oils in the sand, a white extrusion visually frames the beach and the horizontal red beam can be touched.

The student winner is Centenial College’s The Beach’s Percussion Ensemble, which consists of stacked wooden shapes fitted with metal bells (like wind chimes) and sticks circling a steel drum.

The most comfortable-looking installation is easily iheartblob’s Noodle Feed, an environment made out of colourful noodles. Visitors can also use an augmented reality app to leave virtual impressions.

Four art installations have been erected along Woodbine Beach, injecting a little bit of life into a destination that may not have otherwise been on your radar in the dead of winter.

The annual Winter Stations exhibition has been held since 2014 and was initially conceived as a way to help bring people to the beach in the colder months through the hosting of an international design competition.

This year’s event begins on Family Day and will run through March 30.

The theme is “Beyond the Five Senses.”

Organizers say that designers were asked to “explore how our senses interact and overlap to provide us with a picture of our environment and how we interact with it.”

The winning designs include “Mirage” by Cristina Vega and Pablo Losa Fontangordo, “Kaleidoscope of the Senses” by Charlie Sutherland, “Noodle Feed” by iheartblob and “The Beach’s Percussion Ensemble” by Centennial College.

“Mirage” was “designed to react to the movements of the sun and the people,” according to organizers. Depending on where the visitors are positioned, they will see either a red transparent sun setting or a light and bright rising sun laying on the horizon.

“Kaleidoscope of the Senses” makes use of an existing lifeguard chair and aims to bring together a “balanced yet dynamic composition of elements which are both a visual and experiential celebration of the senses and a metaphor of the body in space,” organizers say.

“Noodle Feed,” meanwhile, “goes beyond physical senses and creates a shared augmented reality environment where people can interact in new ways,” including through the use of an app that will let them “leave digital traces of their time at the installation.” 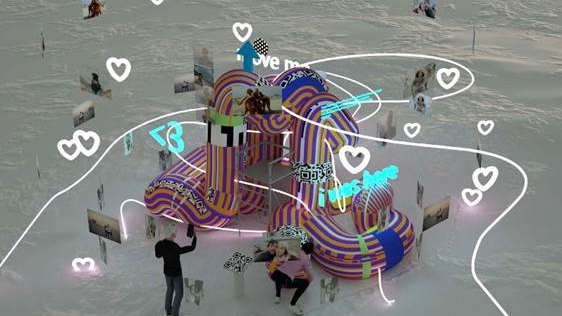 The fourth and final exhibition, “The Beach’s Percussion Ensemble,” is made of metal bells of varying shapes and sizes, organizers say. Some of the structure’s prisms can also be made into steel drums that visitors can bang on. 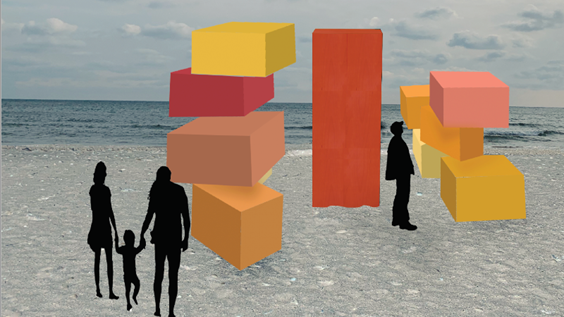 “The elements of the lake’s environment will release the bells’ sound like a wind chime,” a brief description of the exhibit reads.

The annual Winter Stations exhibition is held with the support of the Waterfront BIA.