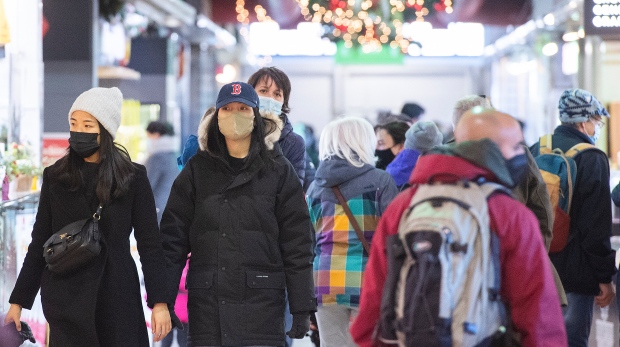 CANMORE, ALTA. —
Officials have confirmed the first cases detected in Canada of the Omicron COVID-19 variant amid warnings that it remains unclear just how transmissible and severe infection by the highly-mutated variant might be.

On Sunday, it was revealed that two people from Ottawa, who had returned from a trip to Nigeria, tested positive for the variant of concern first detected in southern Africa.

The travellers entered Canada at Montreal’s Pierre Elliott Trudeau International Airport, where COVID-19 testing was completed, and then travelled to Ottawa, Ontario officials said Monday. The patients are in isolation and Ottawa Public Health is conducting case and contact management.

The province is also following up on four more possible cases of the Omicron variant — two in the Hamilton, Ont., area and two in Ottawa.

Ontario is the first province to confirm detected cases of the variant, but health officials across the country have commenced targeted testing of people who have travelled from one of the seven southern African countries under federal travel restrictions.

Alberta’s top doctor said Sunday that public health officials in her province were contacting people who had travelled from “one of the countries of interest” in the past 14 days to tell them to self-isolate.

“We are working with health officials across the country to monitor the Omicron situation closely,” Dr. Deena Hinshaw tweeted on Sunday. “There are currently no confirmed cases of this COVID-19 variant in Alberta.”

Experts warned it was only a matter of time before the variant made its way into Canada. And while federal officials say the detection of the cases shows COVID-19 screening efforts are working, Federal Health Minister Jean-Yves Duclos says Canadians should expect more cases of the variant to be confirmed on Canadian soil.

“This development demonstrates that our monitoring system is working,” Federal Health Minister Jean-Yves Duclos said in a statement Sunday.

“As the monitoring and testing continues with provinces and territories, it is expected that other cases of this variant will be found in Canada.”

WHAT WE KNOW ABOUT THE OMICRON VARIANT

Little is known about the B.1.1.529 variant, now known as Omicron, which was declared a variant of concern last week by the World Health Organization (WHO).

Although it has been linked to a rapid rise in cases in South Africa, WHO officials say it is not yet clear whether the variant is more transmissible or causes more severe illness than other coronavirus variants.

Initial research into Omicron has sparked concern from researchers because it has more than 30 mutations of the spike protein which can change the way a virus infects cells and spreads. These mutations can also make it harder to for the body’s immune system to attack it.

Speaking to reporters on Monday, Ontario’s chief medical officer of health, Dr. Kieran Moore, said it is still too early to determine what impact the Omicron variant may have on public health protocols or the province’s health-care system, noting a lack of data on the transmissibility of the variant.

“When we saw Delta take over as a dominant strain, it took three to four months… it may be a two to three month transition if [Omicron] is more infectious than Delta,” he said. “We will have greater clarity in the coming weeks.”

Confirmation of the arrival of the B.1.1.529 variant in Canada comes just days after the country implemented new travel restrictions on foreign nationals who had visited several countries in southern Africa in the last two weeks.

Nigeria, however, is not on the list of countries affected by Canada’s travel ban.

Moore said Monday that the province is conducting genomic sequencing on all eligible COVID-19 tests in the province in order to screen for Omicron and other variants.

Moore said that, according to the Public Health Agency of Canada, 375 people have returned from those countries of concern and will be contacted to undergo testing for the Omicron variant.

With cases now confirmed in 15 countries – including Scotland, Germany, Australia and Hong Kong – there has been some concern that restricting flights from African countries alone is not enough to stop the spread of the variant.

“These travel bans on particular countries in southern Africa are not going to be sufficient or are not going to be what stems the flow of the Omicron variant across our country,” infectious disease expert Dr. Dale Kalina told CTV News Channel Monday.

“The reality is it’s already here and it’s not probably just from individuals who travel to other countries, as we’re seeing around the world.”

“What we do have in place already here in Canada is quarantine measures and vaccination mandates for anyone who’s coming into the country… and those are the types of things that are really going to help us.”

The federal government is expected to be questioned Monday whether it will expand those travel restrictions to include more countries.

This comes ahead of new re-entry testing requirements for fully vaccinated Canadians and permanent residents. As of Nov. 30, fully vaccinated residents returning home after short trips to the United States and abroad will no longer have to provide proof of a negative molecular test, such as a PCR test.

A molecular test is still required for re-entry of those taking trips abroad lasting more than 72 hours.

Meanwhile, Ontario officials are urging the federal government to take stronger action at the border, suggesting that everyone be tested for COVID-19 upon arrival, not just before leaving for Canada.

“The best defence against the omicron variant is stopping it at our border. In addition to the measures recently announced, we continue to urge the federal government to take the necessary steps to mandate point-of-arrival testing for all travellers irrespective of where they’re coming from to further protect against the spread of this new variant,” read Sunday’s joint statement from Moore and Ontario Health Minister Christine Elliott.

Britain says it is supplying anti-tank weapons to Ukraine

Britain said on Monday it had begun supplying Ukraine with anti-tank weapons to help it defend itself from a potential invasion, during a stand-off with Russia which has massed troops near the Ukrainian border.

Western countries say they fear Russia is preparing a pretext for a new assault on Ukraine, which it invaded in 2014.

Moscow denies any plans for an attack, but has said it could take unspecified military action unless the West agrees to a list of demands, including banning Ukraine from ever joining NATO. Talks last week ended with no breakthrough. Kyiv has asked Western countries for arms to help it protect itself.

“We have taken the decision to supply Ukraine with light anti-armour defensive weapon systems,” British Defence Secretary Ben Wallace told parliament, saying the first systems were already delivered on Monday and a small number of British personnel would provide training for a short period of time.

He did not specify the number or type of weapons that were being sent, but said: “They are not strategic weapons and pose no threat to Russia. They are to use in self-defence.”

“These are short-range …. but nevertheless it would make people pause and think what they were doing and if tanks were to roll into Ukraine, invade it, then they would be part of the defence mechanism.”

Britain has previously warned Russia of severe consequences if it launched a new military assault on Ukraine, while offering financing to enhance Ukraine’s naval capabilities.

Wallace said he had invited Russian Defence Minister Sergei Shoigu to visit London in the next few weeks to discuss the crisis, though he did not know whether the Russians would accept.

“The current gap is wide but not unbridgeable,” Wallace said, voicing the hope that diplomacy would prevail and adding, “It is President (Vladimir) Putin’s choice.”

“Based on the seriousness of the allegations and expected timelines for the final audit results, the Government of Canada has decided, and Supermax Healthcare Canada has agreed, to terminate by mutual consent the two existing contracts for the supply of nitrile gloves,” the department told Reuters in an emailed statement.

Supermax did not immediately respond to a request for comment.

(Reporting by A. Ananthalakshmi; Editing by Ed Davies)

A Moscow court on Monday said it had ordered Alphabet’s Google to pay 4 million roubles ($52,526) for not removing access to content banned in Russia, the latest in a string of fines for the U.S. tech giant.

The TASS news agency reported that Google had been fined for providing access to links of banned websites.

Samsung officially debuts the Exynos 2200 with an RDNA 2-based Samsung Xclipse 920 GPU – Notebookcheck.net