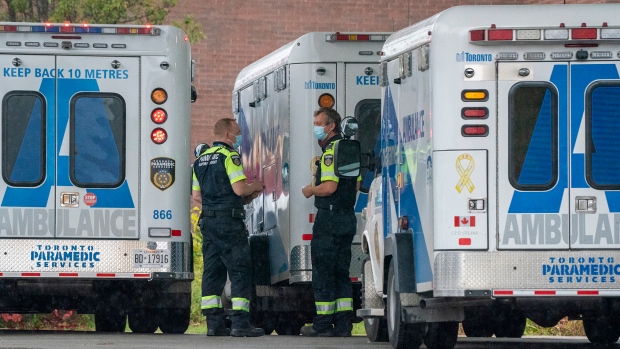 Ontario reported more than 2,100 COVID-19 cases on both Friday and Saturday, with 81 new deaths over that 48-hour period, as the number of patients in intensive care surpassed 300 for the first time.

Officials said 43 people died of infection on Friday and 38 died on Saturday, bringing the total number of deaths reported since the pandemic began to 4,359.

Testing data, usually provided by Ontario Health, was unavailable for Friday and Saturday.

There are now nearly 20,000 active cases of novel coronavirus infection across the province, the highest that number has ever been, up from 18,200 one week ago.

Thirty-nine of the eighty-one deaths reported in the past 48 hours were among residents of long-term care homes.

The latest report from Critical Care Services Ontario obtained by CP24 showed 304 adults in intensive care across the province due to COVID-19 on Saturday, as well as one newborn baby.

Twenty-nine more people entered intensive care due to COVID-19 in the past 24 hours, the report said.

Modelling released earlier in December said the province would hit 300 ICU beds filled sometime before the end of the month.

Michael Garron Hospital intensivist Dr. Michael Warner says what happens in the next few weeks will determine if Ontario’s hospital system will make it through January without collapsing.

“What happens in the next two or three weeks really depends on how much spread of COVID-19 there has been in the community,” he told CP24. “We could reach 400 or 500 (occupied ICU beds) by mid Jan. or in the worst case scenario up to 1,500 (beds occupied) by Jan. 22, but I don’t think that will happen because if it does we will have to impose a much more severe lockdown in order for the health system to survive.”

He said there needs to be continued surveillance testing among-school age children, and a proven comprehensive way to isolate and support workers in large indoor workplaces if Ontario is to get its rate of infection under control.

“Just cruising along at 2,200 cases per day until a vaccine has been received by enough people to make a difference isn’t going to work,” he said.

“We have to go after the root causes, prove that school is safe before kids return to school so that doesn’t become a tinder box for COVID. And we have to make sure that people who work in factories, especially in Peel, are protected.”