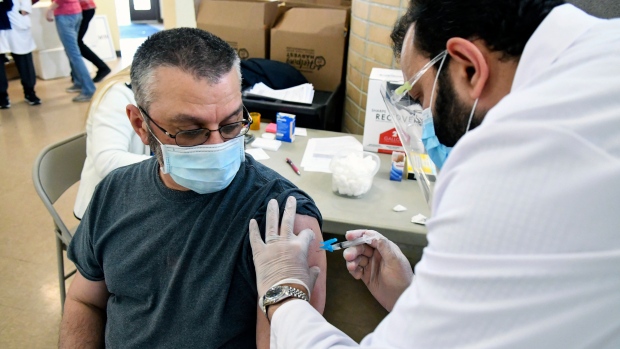 Shoppers Drug Mart, Rexall, Loblaws and Costco are among the pharmacy chains participating in the rollout of the Oxford-AstraZeneca vaccine in three regions of Ontario this week, Premier Doug Ford announced Wednesday.

As part of a new pilot program, 325 pharmacies in Toronto, Windsor-Essex, and Kingston, Frontenac, Lennox & Addington, are offering COVID-19 vaccination appointments to Ontarians born between between January 1, 1957 and December 31, 1961. Speaking to reporters on Wednesday afternoon, Ford said some of those pharmacies had already started administering vaccines as of this morning.

Both big chains and smaller independent pharmacies have been included in the pilot, the premier said.

Although people between the ages of 60 and 64 are not being prioritized during Phase One of province’s vaccination program, the AstraZeneca doses are being made available to people in that age group based on the advice of the National Advisory Committee on Immunization.

The committee said the AstraZeneca vaccine is not recommended for people ages 65 and older due to “limited information on the efficacy of this vaccine in this age group.”

The 194,000 AstraZeneca doses that Ontario has now received are set to expire on April 2 and the pilot program will help ensure vaccine doses are delivered as “quickly and efficiently” as possible, Ontario Health Minister Christine Elliott said this week.

Vaccines will go to doctors’ offices in other regions

Primary care providers in those areas will not be taking appointments by request but will be reaching out to eligible patients.

“Our first allocation of AstraZeneca is 194,000. In that age group of 60 to 64 across Ontario there are one million people so clearly we don’t nearly have enough vaccines to do all of that age group in this first batch,” he said at a news conference on Wednesday afternoon.

“We are not sure of the next arrivals of AstraZeneca but you can be sure as soon as we get them, as soon as we know, we will publicize that and we will move it to our logistics pipeline and get it to pharmacies and family doctors and carry on along that same age group until we have finished all of those who are eligible and who want to have the vaccine.”

The province is currently in Phase One of its vaccination program, which prioritizes health-care workers at the highest risk of infection and people over the age of 80 for a shot.

To date, Ontario has administered just 943,533 doses of a COVID-19 vaccine but the Ontario government has said it hopes to inoculate another one million people in the month of March.

During Phase Two of its vaccine program, which is set to run from April to July, the province has said it plans to offer doses to nine million more Ontarians.

The Ontario government plans to ramp up inoculations next week when it launches its online appointment booking portal on Monday. Officials say more than 120 mass immunization clinics are scheduled to open this month and many areas, including the regions of Peel and York, have already opened mass vaccination sites to begin inoculating people over the age of 80.

“I think people should understand that as supply has increased, the different kinds of places we are going to be able to administer the vaccine have been increasing as well,” he said.

A group of hospitals in Toronto have launched their own booking portal and have already begun inoculating people over the age of 80.

Vaccines are currently only available at select pharmacies in Toronto, Windsor-Essex, and Kingston but the premier said Wednesday that as more supply become available, additional pharmacies will come online and begin to offer COVID-19 vaccines to the general public.

Ford said while not all of the province’s 4,900 pharmacies will be involved in the vaccine rollout, “the vast majority will.”

Next few weeks will determine whether Ontario can see 'return to normal' this summer, modelling suggests – CTV Toronto

Variants of concern cause more than 40% of new COVID-19 cases in Ontario, experts say – CBC.ca

* The most heavily traded shares by volume were Toronto-dominion Bank, Royal Bank Of Canada and Suncor Energy Inc.

By David Ljunggren and Allison Lampert

OTTAWA/MONTREAL (Reuters) -Air Canada, struggling with a collapse in traffic due to the COVID-19 pandemic, reached a deal on Monday on a long-awaited aid package with the federal government that would allow it to access up to C$5.9 billion ($4.69 billion) in funds.

The agreement – the largest individual coronavirus-related loan that Ottawa has arranged with a company – was announced after the airline industry criticized Prime Minister Justin Trudeau’s Liberal government for dawdling. The United States and France acted much more quickly to help major carriers.

Canada‘s largest carrier, which last year cut over half its workforce, or 20,000 jobs, and other airlines have been negotiating with the government for months on a coronavirus aid package.

As part of the deal, Air Canada agreed to ban share buybacks and dividends, cap annual compensation for senior executives at C$1 million a year and preserve jobs at the current level, which is 14,859.

It will also proceed with planned purchases of 33 Airbus SE 220 airliners and 40 Boeing Co 737 MAX airliners.

Chris Murray, managing director, equity research at ATB Capital Markets, said the deal took into account the “specific needs of Air Canada in the short and medium term without being overly onerous.”

He added: “It gives them some flexibility in drawing down additional liquidity as needed.”

Transport Minister Omar Alghabra said the government was still in negotiations with other airlines about possible aid.

Opposition politicians fretted that further delays in announcing aid could result in permanent damage to the country.

Air Canada said it would resume services on nearly all of the routes it had suspended because of COVID-19.

The deal removes a potential political challenge for the Liberals, who insiders say are set to trigger an election later this year.

The Canadian government previously approved similar loans for four other companies worth up to C$1.billion, including up to C$375 million to low-cost airline Sunwing Vacations Inc. The government has paid out C$73.47 billion under its wage subsidy program and C$46.11 billion in loans to hard-hit small businesses.

Jerry Dias, head of the Unifor private-sector union, described the announcement as “a good deal for everybody.”

But the Canadian Union of Public Employees, which represents roughly 10,000 Air Canada flight attendants, said the package protected the jobs of current workers rather than the 7,500 members of its union who had been let go by the carrier.