All users are advised to update WhatsApp, as older versions have a vulnerability that could see a single message wipe out your group chats …

Security researchers from Check Point found a serious security flaw in the iOS and Android apps.

The defect would have enabled a bad actor to deliver a destructive group chat message that produces a swift and complete crash of the entire application for all members of the group chat. The crash is so severe that users are forced to uninstall and reinstall the application, in order to gain proper use of WhatsApp. Furthermore, the user would be unable to return to the group chat, which would lead to the loss of all group chat history, indefinitely. The group chat would then not be able to be restored after the crash occurs and would need to be deleted in order to stop the crash-loop.

Carrying out the attack would be relatively simply. An attacker would use a web browser debugging tool to edit a message to any group chat. That message would cause the app to crash for all members, and it would continue to crash each time anyone tried to open it.

Because the only way to recover would be to delete the app and all its data, then reinstall from scratch, all chat history in the group would be lost for all members.

Check Point followed the usual responsible disclosure process, advising WhatsApp of the details, and waiting for the company to issue an update to fix it before going public.

That has now been done, and you can protect yourself and your groups from this by ensuring you update WhatsApp to the latest version. Open the App Store app, tap your profile photo top-right and scroll down to see whether any updates are available. If there are none, you can check it has already been updated by scrolling down to WhatsApp in Recent Updates and ensuring you are on version 2.19.120 or later.

Check Point previously discovered a method for someone to fake responses from you in quoted replies, as well as a way to fool you into confusing private a public messages. The latter issue has fixed, but the way end-to-end encryption works with WhatsApp means it wouldn’t be practical to fix the quote-spoofing, says the company.

WhatsApp owner Facebook recently sued an Israeli company for a hack which allowed various governments to spy on more than 1,000 users before the company fixed the vulnerability.

Apple is reportedly thinking about creating a podcast subscription service to compete with the likes of Spotify and SiriusXM.

A new report from The Information reveals that the tech giant is currently in talks with production companies about the service, which would charge people to listen to podcasts. By charging for individual podcasts, Apple could give creators a way to make more money, which may convince them to leave rival services.

The report outlines that it’s worth noting that Apple often explores ideas without seeing them through, so it’s unknown when or if the service could launch.

It does make sense for Apple to consider forming its own premium service, especially since it played a role in popularizing podcasts through the iPod and iTunes. Further, Apple already runs the most widely used podcasting app in the industry, as noted by The Information.

Spotify reportedly also considered creating a separate service for exclusive podcasts. Other podcast services such as Stitcher have locked certain podcasts behind subscriptions. Amazon is also looking to disrupt the podcasting industry with its recent acquisition of the Wondery network.

A Bloomberg report from last year revealed that Apple was interested in buying exclusive rights to podcasts and developing companion podcasts for its Apple TV+ content. This latest report builds on this and shows that Apple is looking to enter the competition.

In a digital press conference on Thursday, with the tagline “Welcome to the Everyday Epic,” the company demoed its three new Galaxy S21 smartphones in varying sizes — a 6.2-inch Galaxy S21, a 6.7-inch S21+ and a 6.8-inch S21 Ultra. Samsung showed off its faster Qualcomm Snapdragon 888 processor, advanced AI-powered cameras, new colors in a matte finish and premium earbuds you can buy to go with it. All models come with built-in 5G capabilities.
The S21 Ultra is clearly Samsung’s standout product. While the Galaxy S21 and 21+ feature a new flat high definition screen (2400 x 1080), the S21 Ultra model takes it a step further with a super high-resolution display (3200 x 1400). The S21 Ultra has four rear cameras, compared to the three rear cameras on the other two devices. The S21 Ultra’s four cameras are a 12-megapixel ultra-wide lens for shooting landscapes or group shots, a 108-megapixel wide-angle lens for clarity and color accuracy and two 10-megapixel telephoto lenses that work together to zoom even more into shots.
The Galaxy S21 ($799) and S21+ ($999) are $200 cheaper than the models they’re replacing, and the S21 Ultra ($1199) is $300 less than its predecessor. These prices are the same as Apple’s iPhone lineup, though the S21 Ultra costs $100 more than the iPhone 12 Pro Max.
The S21 and S21+ (available in purple, black, gray, white and pink) and the S21 Ultra (available in black, silver, brown, titanium and navy) will be available for pre-order on Thursday. All devices start shipping on January 29.
The three models support the S Pen stylus used in its Note series phones, but all three models ship without a charger, which Samsung says is for sustainability reasons. Apple made a similar movie with the iPhone last year. 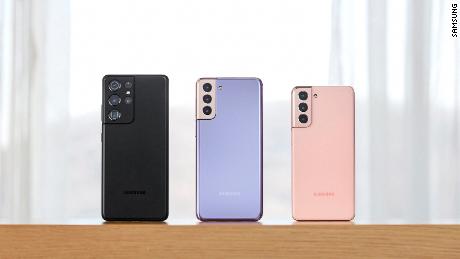 The upgrades are indeed improvements to the Galaxy lineup, most significantly to the camera technology, but Samsung’s “epic” motto feels off, both because the changes are more evolutionary than revolutionary and because of the backdrop to the announcements. Life feels anything but epic: More people are stuck inside, the news cycle is exhaustive and unemployment levels remain high. Let’s be honest, the day is a win if we change out of sweatpants.
In a nod to our new normal, Samsung is throwing in some features that may be better geared for life at home during the pandemic. This includes a default blue light filter that could help reduce eyestrain when you’re doomscrolling. The phones also offer deeper integration into home automation products. 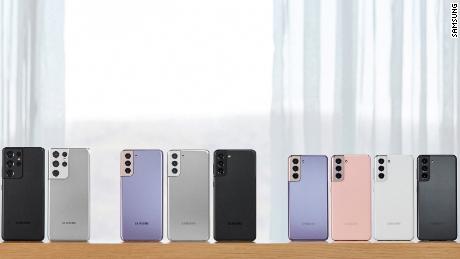 In addition to the phones, Samsung introduced a premium version of its wireless earbuds, called Galaxy Buds Pro, with enhanced noise cancellation and an ambient sound feature. Ahead of the event, a Samsung executive in a product demo likened working from home to being at a construction site — dogs barking, a toddler running around and appliances humming in the background. The new wireless earbuds have three built-in microphones that separate the user’s voice from the background noise so audio can come in clear during a call, even if it’s a chaotic background.
Meanwhile, ambient sound lets you hear the world around you on top of what you’re listening to. If you’re using them on Zoom call, you can still hear your kid in the background. The two features work together intelligently, too. When your child inevitably comes to talk to you during your meeting, Galaxy Buds Pro will detect them speaking, lower the volume and automatically switch to the ambient noise setting so you can hear him better.
The set, which comes in purple, black and silver, costs $199 — $50 less than the rivaling Apple AirPods Pro. The company claims it gets 5 hours of playback and 13 hours of reserved power when fully charged.
Samsung’s annual Galaxy event usually coincides with Mobile World Congress in Barcelona in February — the first major tech event that was canceled last year due to the pandemic — but the company moved it up to land on the last day of this year’s all-digital CES consumer tech conference.
Following a long thread of rumors, Samsung also unveiled a Bluetooth location tag called Galaxy SmartTag that lets you locate non-connected devices with a physical tag that attaches to keys, a bag or a pet’s collar. 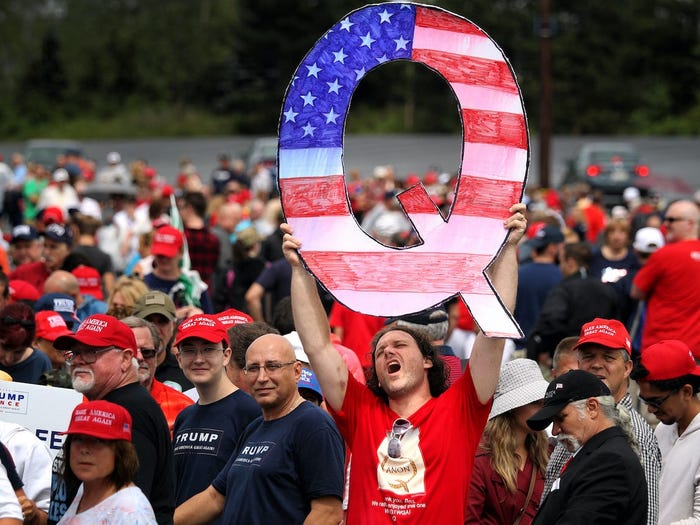 Conspiracy theorists and pro-Trump extremists are using podcasts hosted on mainstream tech platforms to push misinformation, despite a widespread crackdown on individual social media accounts that push these ideas.

The AP first reported that podcasts on Apple, Spotify, and Google were peddling claims that the US election was rigged, and that the January 6 US Capitol riots were staged, among other claims.

The podcast “Red Pill News”, hosted by a user called RedPill78, described the US Capitol riots as “a staged event” in an episode aired January 11. That’s still available on Apple Podcasts as of January 17.

The AP found another podcast, “X22 Report”, which said in one episode ahead of the Capitol riots: “We the people, we are the storm, and we’re coming to DC.” That is also available on Google’s podcasting platform as of January 17.

And Insider on Sunday found a third podcast, called “Quite Frankly” and hosted on Spotify, Apple, and Google, where the host characterized the election in a January 16 episode as “a stinky, smelly, suspicious election” in a wider rant about free speech. “Quite Frankly” has also hosted RedPill78 on prior episodes.

The ongoing availability of these podcasts contrasts with the strict stance taken by several major tech firms to crack down on social media accounts pushing conspiracies, or apps that peddle hate, in the wake of the Capitol riots on January 6.

Apple, for example, removed alternative social network Parler from its App Store on January 10, saying that the firm hadn’t done enough to moderate violent speech in the run-up to the riots. Pro-Trump rioters reportedly used Parler and other platforms to plan the insurrection.

Yet, while the X22 Report podcast remains available via Apple, it has been suspended by YouTube, Spotify, and Twitter. Red Pill News’ podcast description also states it is no longer available on YouTube.

A fourth podcast “SoulWarrior Uncensored” is run by self-declared QAnon believer Melody Torres. According to the AP, she said she has been booted from Twitter. The AP also reported that the podcast was still available on Apple and Google, but was removed from Spotify after an inquiry by the news outlet.

Oren Segal of ADL’s Center on Extremism told AP: “Podcasts filled with hatred and incitement to violence should not be treated any differently than any other content.

“If you’re going to take a strong stance against hate and extremism in the platform in any way, it should be all-inclusive.”