Their canvas may be utilitarian, but for local First Nation artists, the art pieces wrapping four utility boxes in downtown Sidney are part and parcel of a broader resurgence in Coast Salish art and culture.

“Our art system was in grave danger for a long time,” said Charles Elliot of Tsartlip First Nation last week, while standing next to the BC Hydro box at 2464 Beacon Ave. wrapped up in his piece titled “Seals.”

“I noticed that we didn’t have our system out there to see. I actually had to go into the museums [and] private collections to look [for it],” he said.

Elliot, a master carver whose work has appeared across the world, said he chose his subject, because seals are common in the area, very playful and friendly. “An orca would be a little bit too aggressive, but seals are just friendly,” he said. He also hopes that the public will learn more Coast Salish art.

“There are quite a number of First Nations art disciplines and each discipline belongs to a certain area, and this is the Coast Salish style,” he said. “I wanted to make sure that I had good display of Coast Salish art. It was easy to do that with the seals.”

The piece “Otters & Blue Heron” by Doug LaFortune of the Tsawout First Nation stands just down the street from Elliot’s piece at 2488 Beacon Ave. “The otter is a very important piece of our culture,” said LaFortune, when asked about his choice of subject.

“It’s very spiritual. Plus I was down at the bandstand [in Beacon Park] and I saw an otter running around the lawn. I have seen him quite often, so I really like the playfulness. [Otters] are real tricky characters and I enjoy watching them all the time.”

Otters, he added, would often appear on traditional house posts. “They brought messages of good tidings and things like that,” he said.

LaFortune hopes that his art will give residents a good feeling, but also inspire them to learn more the culture of local First Nations.

“Our culture is a lot deeper than people think it is,” he said. “It’s an old, old culture. I just want the public to get a touch of it, a little taste of it.”

Two other artists — James Jimmy of Tseycum First Nation and Doug Horne of Tsawout First Nation — have also contributed respective pieces to this tableau, the “Sqto (Raven)” art on the hydro box at the corner of Fourth Street and Beacon Avenue and the “Hummingbird” near 2297 Beacon Ave, as part of Sidney’s utility box beautification program.

It started in 2006 and has since wrapped 40 utility boxes in art from established and emerging artists from across the Saanich Peninsula.

Coun. Barbara Fallot said last week the COVID-19 pandemic has underscored the importance of art in thanking the artists.

“I’m so pleased that we are able to have more public art work,” she said.

Primary funding for the project comes from the municipality, along with participation and sponsorship from local businesses and a BC Hydro grant program. Van Isle Marina has sponsored Doug Horne’s “Hummingbird” piece this year.

Earlier this year, Sidney held a ceremony in council chambers to unveil a Coast Salish spindle whorl carving by Chazz Elliot, the son of Charles Elliot, in recognition of the W̱SÁNEĆpeople, their customs and traditions.

The library is calling for “mini-artists” to drop off their paper creations — whether it’s flowers, drawings, letters or cards — into bins outside two participating Red Deer seniors’ lodges this week.

Staff from the lodges will “proudly display the creations,” bringing joy to residents and staff.

They are also planning to make some social media posts featuring art that is on display at the lodges.

The North Shore’s annual Art in the Garden event is gearing up to go digital this weekend.

The event has been re-imagined as a livestreamed art and music demonstration this Saturday and Sunday evening, while encouraging community members to share pictures of their own green spaces online.

Last month, North Van Arts made the decision to suspend the 21st annual Art in the Garden festival due to the ongoing COVID-19 pandemic and the challenges of practising physical distancing during an event which melds visual arts with some of the North Shore’s most extraordinary gardens.

The decision was made to offer an online version of Art in the Garden in order to keep the spirt of the long-running festival intact, according to Nancy Cottingham Powell, executive director of North Van Arts.

“Art in the Garden is the longest running North Shore garden tour and we didn’t want to just cancel this event that inspires gardeners, artists and nature lovers,” stated Powell, in a press release.

As part of its new online event, for the month of May the arts and culture organization reached out to visual artists and musicians who had participated in past festivals and asked them to create short videos outlining their work, inspiration and methodology.

This weekend, local painters Nicola Morgan and Pierre Leichner are set to take over the organization’s Instagram account as they livestream the creation of original artwork over live music performed by North Shore musicians Ava Maria Safai and Paul Silveria.

North Van Arts is also encouraging people on the North Shore to comment and share pictures of their gardens and green spaces this weekend, as well as their own nature-inspired art, by using the hashtag #ArtintheGarden.

“These extraordinary times have forced us to look at how we connect with our community. Art in the Garden Online is an opportunity for us to support our members and local artists in a unique way,” stated Powell.

While students continue to learn from home, art students from three of St. Albert’s high schools are contributing to with.draw.all, which will be posted to the Gazette’s website every second Thursday.

Artist: Eleanor Bordian
Grade 11
Medium: Chalk pastels
Artist statement: “Our challenge was drawing our favourite character in chalk pastels. Portraits can be drawn in so many mediums and I really enjoy drawing and painting them.” 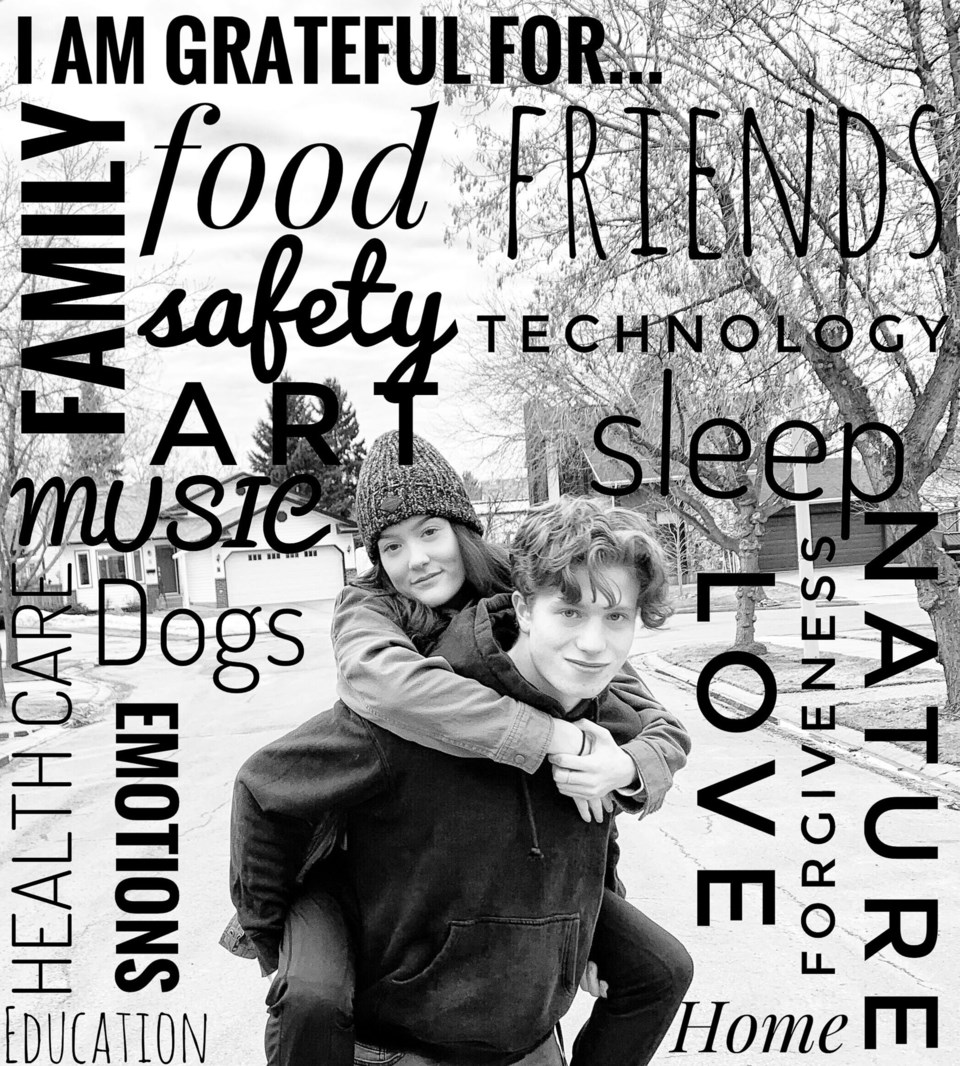 Artist: Shannon Ruddy
Grade 12
Medium: Photography
Artist statement: “I decided to express a few things that I care about into a photo.” 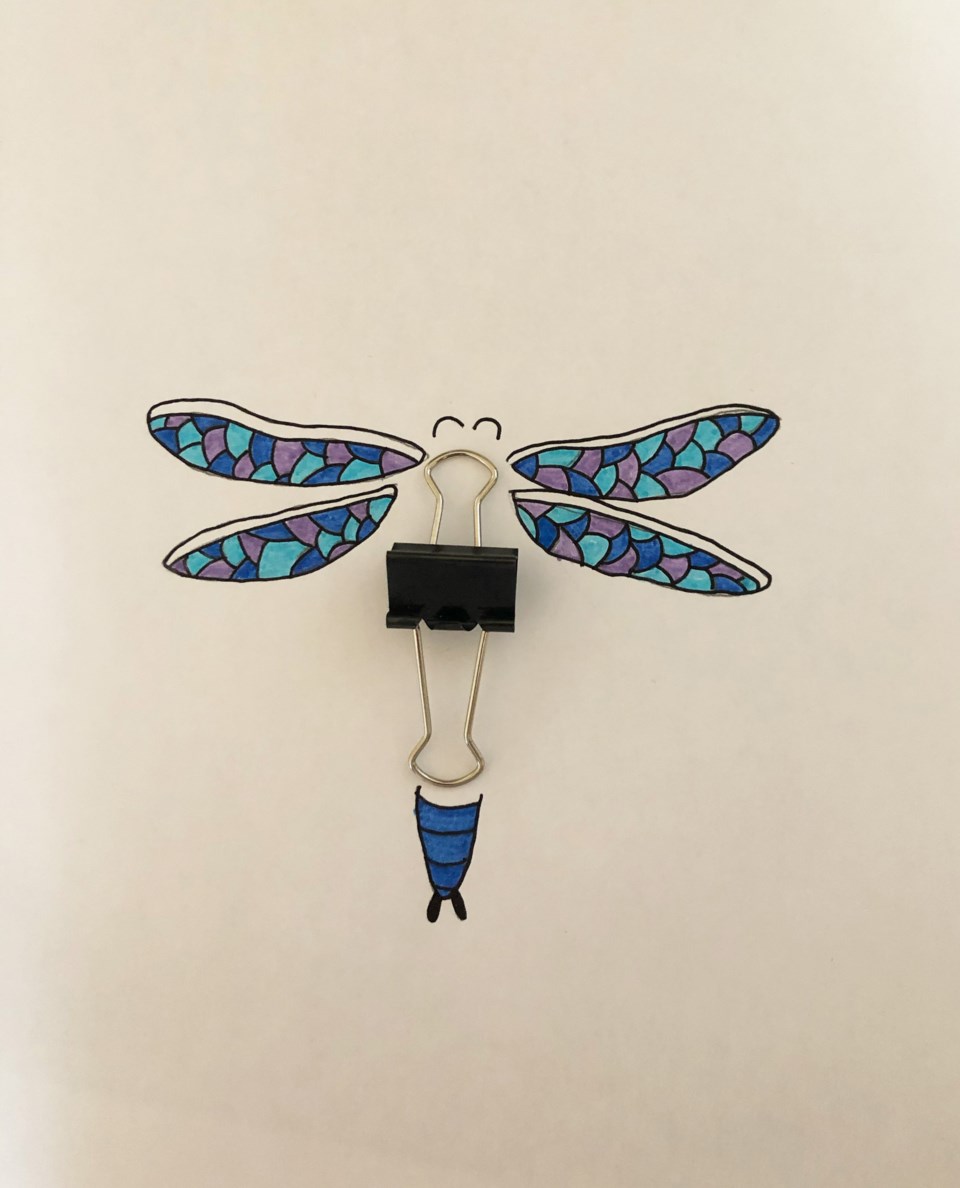 Artist: Aislinn Libich
Grade 11
Medium: Collage
Artist statement: “The weekly challenge was to choose a household item and incorporate it into my artwork. I chose a binder clip and incorporated it into the body of a dragonfly. I then completed the rest of my drawing with four complimentary colours to complete my drawing.” 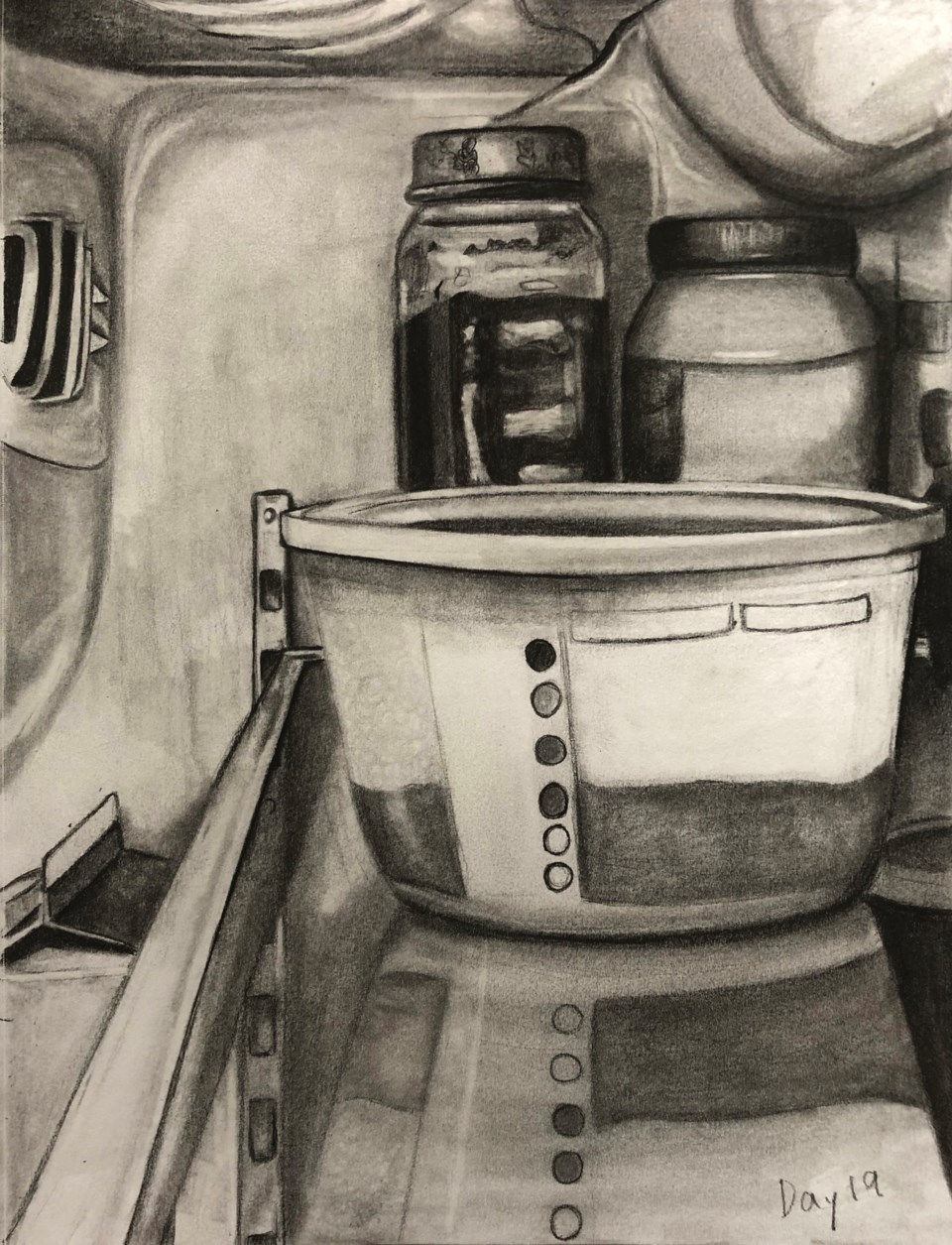 Artist: Jayda Gardner
Grade 11
Artist statement: “I’ve never thought to draw the insides of my fridge before. The different shapes and shadows the items in my fridge created piqued my interest and so I focused on a few items. I really enjoyed this challenge.” 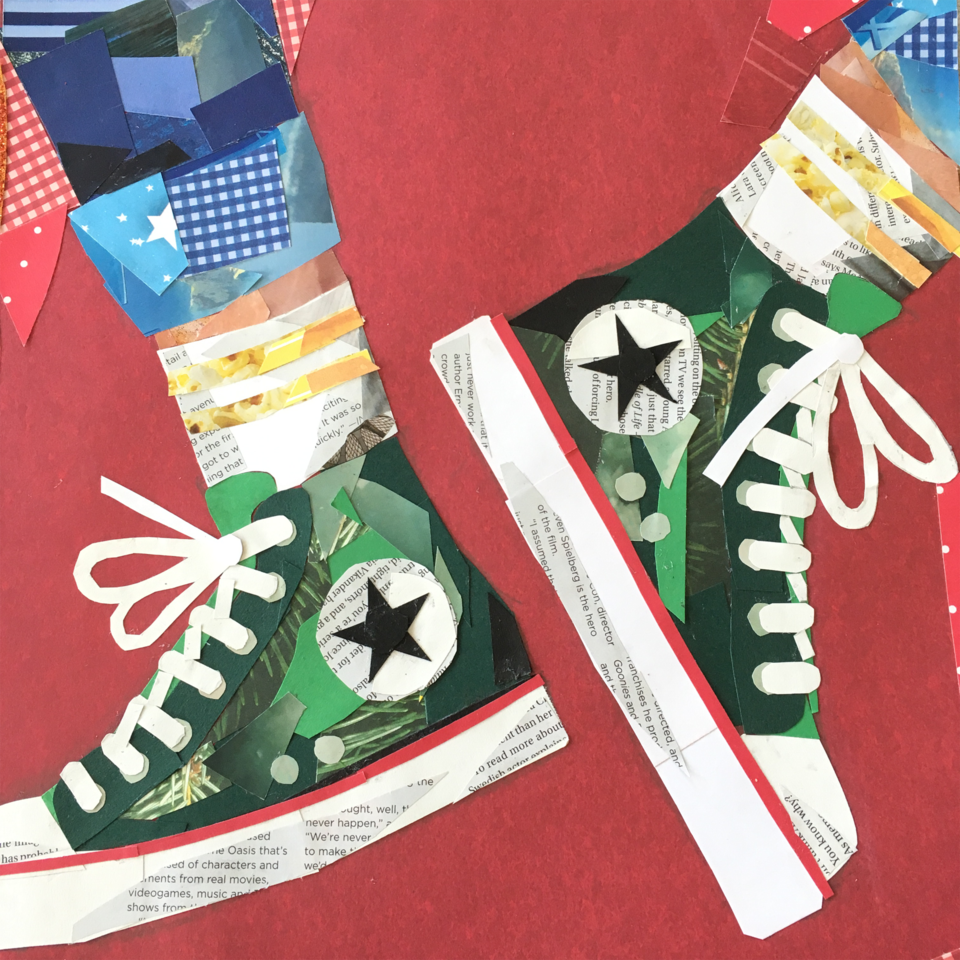 Artist: Chantal Lafraniere
Grade 11
Title: Starry High Tops
Medium: Coloured scrapbooking paper and magazines
Artist statement: “It was a lot of fun creating this collage by finding cool textures from magazines and piecing them together to create an image. I also tried to use some darker and lighter textures to add light and shadows to give the collage more dimensions. Art has been helping me during COVID time by encouraging creativity, and fun hobbies to pursue during this pandemic.” 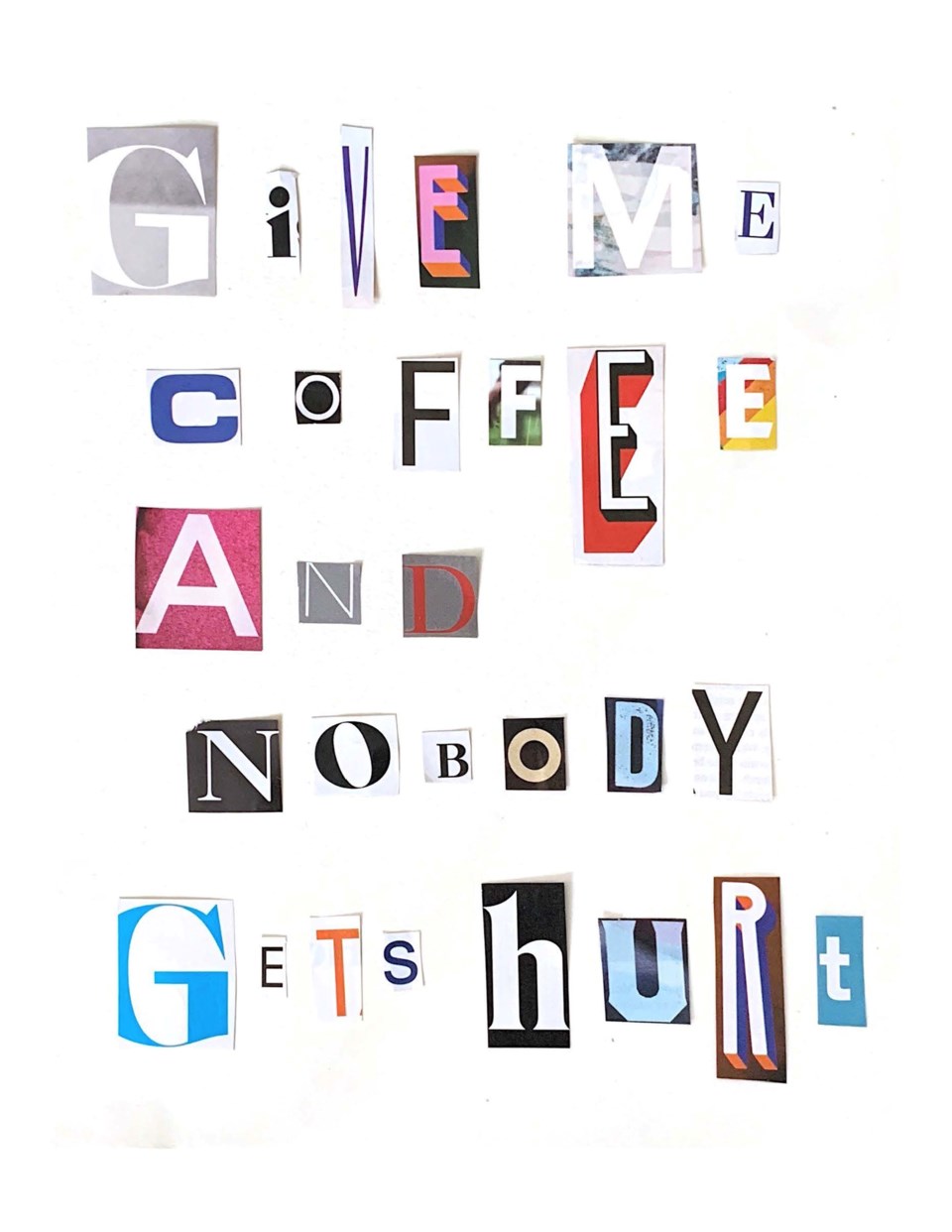 Artist: Avery Witter
Grade 12
Title: COFFEE
Medium: Letters cut into squares from an old fashion magazine
Artist statement: “During this pandemic, art has helped me a lot. It helps me cure my boredom, which not even the television can do anymore. It also helps me to relieve stress and forget about what is happening in the world for just a few moments. I find myself being way less productive during this pandemic so art is one of those things that makes me feel productive and helps me start my day on a productive path. I aim to start my mornings by doing any type of art. It helps me get into the right mind space and also helps me set a bit of a routine.” 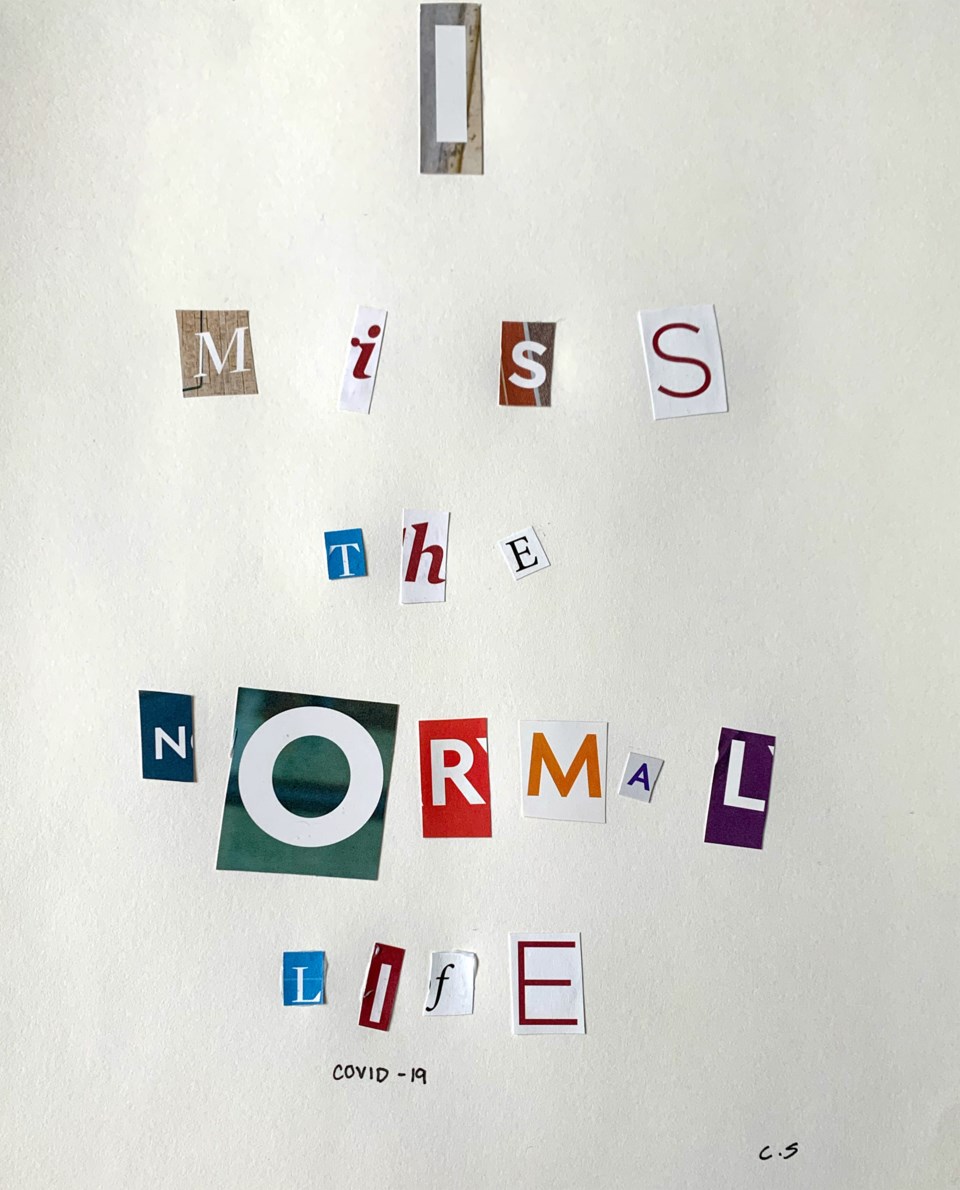 Artist: Cierra Santiago
Grade 12
Title: Dear COVID-19
Medium: Magazine cutouts
Artist statement: “The process of this piece was very simple yet revealed my creativity and true emotion. I decided to create my piece about COVID-19 because there is not a day that passes without thinking or even being reminded of this awful pandemic. Although my piece is very simple, the meaning varies and is understandable to many. “I miss the normal life” is clearly referring to my life before this pandemic. I often think about how my high school experience is not how I imagined and how our graduation, the day I have been waiting for almost all my life, is being taken away and replaced with something not even close to what I envisioned. This pandemic has been an unexpected journey full of emotion and has impacted my life drastically but also has helped me explore my abilities and skills. I am very thankful for all parents and teachers supporting their children and students during this time and trying their hardest to make sure our school experience is as best as it can be.
Personally creating art during this pandemic has been a complete escape for me and has helped my creativity develop even more. Quarantine has helped me create pieces that I didn’t even know I was capable of doing. When creating art my mind is placed somewhere else, where I forget all my problems and all the negatives of this pandemic. Although COVID-19 has ruined many opportunities for individuals there are still positives during this pandemic. Despite all the negatives of the COVID-19 pandemic, it has really helped me appreciate and enjoy my art skills to another level. 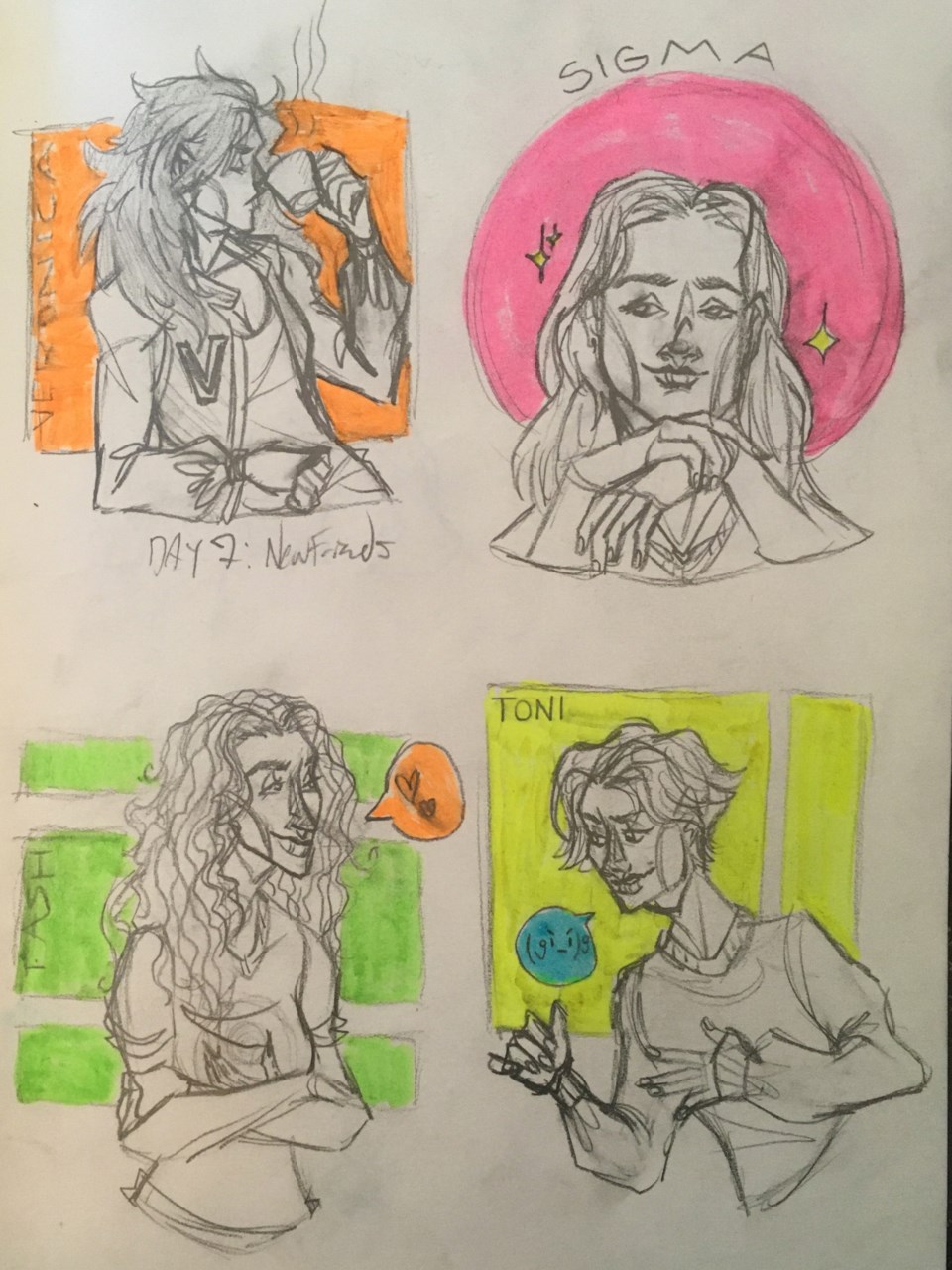 Artist: Lee Anderson
Grade 11
Medium: Pencil and marker
Artist statement: “It has been a busy time for me but I always find time to explore my characters.” 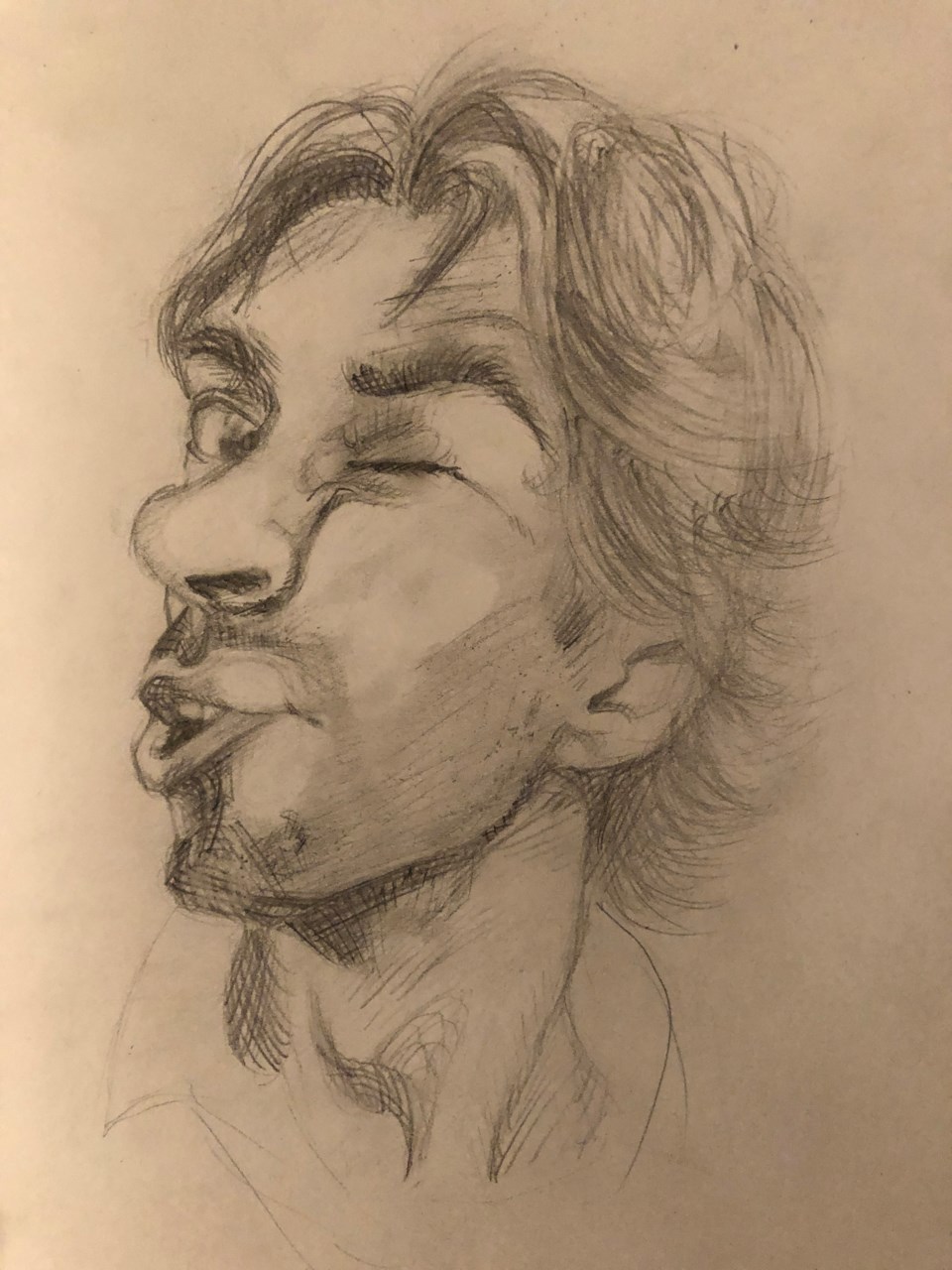 Artist: Dax Ziesel
Grade 11
Medium: Pencil
Artist statement: “This challenge was to draw a face pressed up against glass. The portrait became more about the shadow and light and less about getting a likeness.”