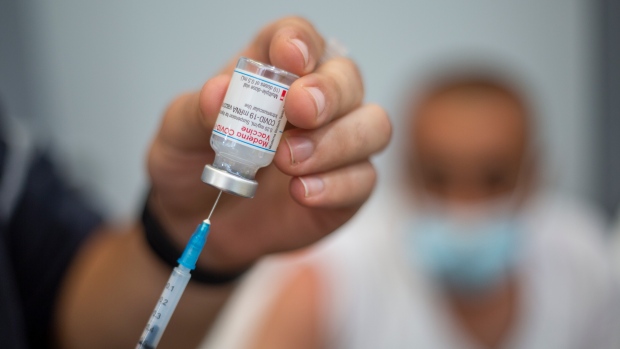 TORONTO —
Canada’s top scientist is advising against extending the time between doses of the COVID-19 vaccines to four months in seniors, arguing the research isn’t there to justify the delay for that population and those with pre-existing conditions.

In early March, Canada’s National Advisory Committee on Immunization (NACI) issued an updated guidance indicating that the interval between doses of the Pfizer-BioNTech, Moderna, and AstraZeneca vaccines could be extended to four months while still being effective.

The changed guideline led several provinces, including Ontario, Manitoba and British Columbia, to alter the vaccine rollouts to include more age groups, but it means that second-dose appointments are being pushed back further than manufacturer recommendations.

Canada’s chief science adviser Dr. Mona Nemer told CTV News Channel’s Power Playon Monday that studies have shown that extending the interval between doses has had a negative effect on their efficacy, particularly in seniors.

Last week, preliminary research out of the U.K. indicated that 95 per cent of cancer patients produced an antibody response if they received the second dose of the Pfizer vaccine three weeks after their first, while only 43 per cent of patients showed the same responses if they waited five weeks between doses.

The NACI said it came to the decision to extend the intervals after considering evidence from scientific research and “real world effectiveness” that shows highlevels of protection following a single dose.

Given the vaccine supply issues at the time, the NACI recommended that it would be more beneficial to maximize the number of people receiving a single dose, rather than hold on to doses for a second appointment.

Nemer said both Health Canada and the NACI will also have access to the updated findings, meaning a new recommendation could be on the way.

“I’m sure they’re following this and they may well be looking at perhaps modulating the recommendation as we go,” she said.

“As data emerges about what it takes to protect [seniors and immune-compromised people], we need to be reviewing what we’re doing.”

Nemer said as long as there aren’t issues with the vaccine supply, reverting to the original recommendations from the pharmaceutical companies “would be the ideal approach.”

“The very people we want to protect the most require that we give them the second dose using the shorter interval, originally as done by the manufacturer in the clinical trials,” she said.

“The one-size-fits-all approach really needs to be modulated in terms of who we need to be protecting.”

Canada now vaccinating over 100K per day. Here’s what it will take to hit September target – Global News

The latest news on COVID-19 developments in Canada for March 22, 2021 – The Record (New Westminster)