Former governor general Michaëlle Jean says wealthy countries must admit mistakes they’ve made in Haiti and pressure that nation’s elite to find a path out of an ongoing humanitarian crisis.

Jean says countries such as Canada need to take responsibility for ushering in debilitating economic policies in Haiti and deporting criminals who have sowed chaos in Port-au-Prince.

She was among dozens of high-profile signatories to an open letter this week that said Haiti is “dying” and needs international help to avoid becoming a failed state.

She echoed Prime Minister Justin Trudeau‘s comments that a solution requires a political consensus, which she says means a deal between civil society groups and the unelected prime minister they want to resign, Ariel Henry.

Jean was born in Haiti and was the former UNESCO envoy for that country after serving as Canada’s representative of the monarch.

This report by The Canadian Press was first published Jan. 4, 2023.

Yukon begins providing $1,300 a year in dental benefits for those with no coverage

An earthquake near Buffalo, N.Y., with a preliminary magnitude of 4.2, was “lightly felt” in parts of southern Ontario Monday morning, according to Earthquakes Canada.

“I felt what I guess you would consider a small jolt and continuous shaking …. about 15 to 20 seconds,” he said.

The federal agency says it doesn’t expect any damage would come from the reported earthquake, but said as of roughly 8 a.m., there were more than 200 reports of people in southern Ontario feeling the rumble, including in Hamilton, the Greater Toronto Area and as far as Quinte West, Ont., near Belleville.

The National Oceanic and Atmospheric Administration in the U.S. says the earthquake occurred in West Seneca, N.Y. and labelled it a 3.8-magnitude quake some three kilometres beneath the surface.

Musician Rich Jones said he felt the rumble in Hamilton.

“My dog started barking and the bed was shaking for a few seconds. Never felt an earthquake here before. Wild,” Jones tweeted.

Earthquakes are generally caused by large segments of the earth’s crust, called tectonic plates, continuously shifting, according to Earthquakes Canada.

The Southern Great Lakes Seismic Zone has a low to moderate amount of seismicity when compared to the more active seismic zones to the east, along the Ottawa River and in Quebec.

“It’s an incredible event to live through … I can’t imagine the ones of greater magnitude,” Murdoch said.

“I think there’s going to be a lot of discussion at water coolers across Buffalo and southern Ontario in terms of what happened this morning.”

Uber has brought back its ride-sharing option in select Canadian cities — but under a new name. Officially launched this week, the company is calling UberX Share, its “most affordable option” for commuters who want to make “greener” and more “sustainable” choices.

Available across Toronto, Vancouver and Montreal, the UberX Share will allow passengers to travel together and split their fares.

Previously known as UberPOOL, the service was paused in Toronto in 2020 due to the COVID-19 pandemic. Since then, Uber said it’s been “working tirelessly to revamp the experience.”

“We know affordability plays a role when people are making decisions on how to get from point A to B,” said Michael van Hemmen, general manager of Uber Canada mobility, in a statement Sunday.

“This new shared rides option will provide a more affordable and sustainable experience for riders and the cities we serve.”

How is UberX different than UberPOOL?

In the past, UberPOOL was known to sometime deviate from a direct route and take more time than public transit, but the company now argues the new feature will only add an average of six minutes to a trip when matched.

Riders will also receive an upfront discount of up to 20 per cent if they choose UberX Share.

“UberX Share provides a greener way to get from A to B, by moving more people with fewer cars to help your city avoid extra emissions and car travel by sharing your ride,” Uber said.

When it comes to the drivers, the company says UberX Share will give them more choices while earning the same recommended rates with UberX Share as they would with UberX but with more riders on a trip.

“A shared trip is likely to be longer and that means a higher fare. There will be a $1 pickup incentive for the driver when picking up a second rider,” Uber added.

Don’t let her size fool you—when it comes to boxing, 17-year-old Talia Birch is all power.

The Quebec teenager recently notched her sixth win in the boxing ring. Not bad considering she had never set foot in one until two years ago.

“I became obsessed, I am obsessed with it, so that’s how it happened,” Birch told CTV National News.

“While you’re fighting, there is honestly nothing going through your head, it’s instinct, you just act on it.”

She threw her first punch in her basement as a way to stay active during the pandemic. Nine months later, she was lacing up her gloves for her first fight.

Birch was so nervous about competing for the first time that it felt like her legs gave out before the fight.

“I couldn’t even warm up because all of my air was sucked out from my body from the stress,” she said. “But then as soon as the bell rang, it was smooth, it was a fun fight.”

The undefeated boxer is now gearing up for the Canada Games in Prince Edward Island later this month, where female boxers will square off for the very first time.

The Canada Games is a multi-sport event with a winter sports and a summer sports version that alternate every two years. It’s the highest level of national competition for Canadian athletes in sports such as boxing, alpine ski, karate, archery and fencing, among others.

“To think that I’ve already made it this far already is crazy to me,” Birch said.

Her coach, Jamaal Garner, isn’t as surprised. He said he saw his protege’s potential the second time they met.

What Birch has is “natural power,” he told CTV National News.

“Natural ability to throw the punch with power, with ease, (and) not be as fatigued doing it.”

But her quick rise in the sport is still exceptional, he added.

“It’s her work ethic,” Garner said. “Her work ethic and willingness and obsession with the sport that sets her apart. I’ve never seen anyone else as dedicated.”

Birch says she dreams of turning pro and one day donning the maple leaf at another high-profile tournament—the Olympics.

With files from Alexandra Mae Jones 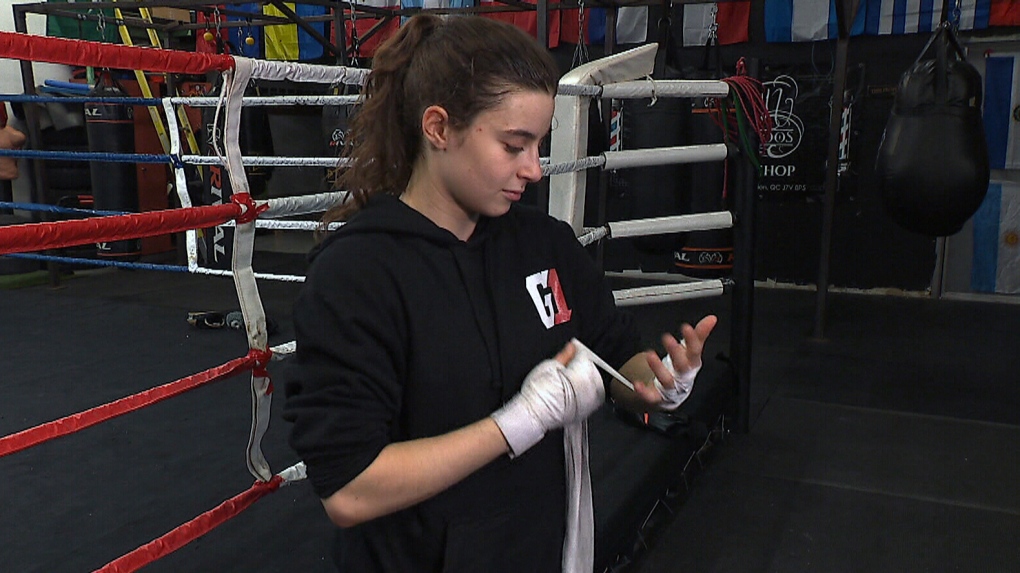 Talia Birch, 17, only started boxing two years ago, but now the undefeated champ is preparing for the Canada Games.