Royal Bank joined rivals including Bank of Nova Scotia , Bank of Montreal and National Bank of Canada in reporting better-than-expected fourth-quarter profits as it set aside less money than analysts had estimated to cover future bad loans.

That came after three straight quarters of adding to provisions for credit losses, including on performing loans, that have built up record reserve levels.

But should the pessimistic scenario materialize, allowances on performing loans would have to increase by about 18 per cent, Royal Bank Chief Risk Officer Graeme Hepworth said.

Amid short-term headwinds like the second coronavirus pandemic wave, and the end of loan deferrals and government support, “we do see a world where delinquencies and … impairments will start to increase through 2021,” Hepworth said.

That would come as trading and underwriting activity, which helped the bank’s capital markets unit generate near-record earnings of $2.8 billion this year, moderates, executives said.

Royal Bank reported fourth-quarter adjusted net income of $2.27 per share, up 5 cents from a year earlier, and better than estimates of $2.05.

National Bank, the smallest of Canada’s six largest lenders, which also reported results on Wednesday, took provisions of $110 million, versus the nearly $160 million that was expected. That helped it post adjusted profit of $1.69 a share, compared with expectations of $1.52.

Royal Bank shares slipped 0.3 per cent to $107.72 in morning trading on the Toronto Stock Exchange, while National Bank’s stock dropped 1.1 per cent to $72.67. The TSE’s stock benchmark fell 0.1 per cent. 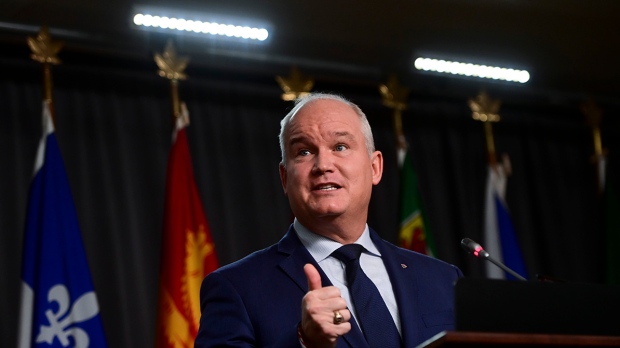 OTTAWA – The Trudeau government is facing increasing pressure to give a clear timeline for COVID-19 vaccine distribution, after news the U.K. approved on Wednesday the Pfizer candidate for emergency use.

The U.K. is the first western country to approve a COVID-19 vaccine, a move that has prompted the federal opposition to once again ask why Canada didn’t move faster.

A statement from Conservative Leader Erin O’Toole says our allies have plans to get vaccines to their people in days or weeks, and yet the prime minister has no timeline and no plan.

“The U.K. has approved Pfizer’s vaccine and are ready to begin vaccinating people next week, yet Canadians still have no idea when they’ll get vaccines,” he says. “Our allies around the world have plans to get vaccines to their people while Prime Minister Trudeau has no timeline, no plan for distribution, and no plan on who will get vaccines first. Canadians deserve certainty.”

Statement from Conservative Leader @erinotoole on the UK becoming the first country in the world to approve the Pfizer vaccine #cdnpoli pic.twitter.com/elMs1dNAjL

His point is being echoed by Tory MPs, with Marilyn Gladu saying, “It’s too bad that the Liberals’ lack of planning has resulted in Canadians going to be delayed months.”

Conservative MP Michael Barrett claims Canada didn’t act fast enough to ensure we had access to immunizations when our allies do.

“They’re going to start vaccinating their population. We’re seeing that by the end of the first quarter, the promise from the Liberals is that we’ll have six-million doses, which is about three-million vaccinations,” he says.