New estimate suggests that 18% of Sun-like (G-type) stars could have a planet the size of Earth orbiting in their conservative habitable zone.

There may be as many as one potentially habitable Earth-sized exoplanet for every five Sun-like stars in the Milky Way. Image credit: Sci-News.com.

Determining the abundance of Earth-size planets in the habitable zones of their stars, where liquid water could exist on a rocky planet’s surface, is one of the major goals of exoplanetary science. NASA’s exoplanet-finding mission Kepler was specifically designed with this goal in mind.

Aside from being the first mission capable of finding and characterizing Earth-sized planets in year-long orbits around Sun-like stars, Kepler revolutionized our perspective on the diversity of planets in the Milky Way.

Dr. Michelle Kunimoto and Dr. Jaymie Matthews, astronomers from the Department of Physics and Astronomy at the University of British Columbia, base their results on an independent planet catalog compiled from their search of nearly 200,000 stars observed over the Kepler mission.

“Estimating how common different kinds of planets are around different stars can provide important constraints on planet formation and evolution theories, and help optimize future missions dedicated to finding exoplanets.”

“Our Milky Way has as many as 400 billion stars, with 7% of them being G-type. That means 5 billion stars may have Earth-like planets in our Galaxy,” Dr. Matthews added.

Typically, planets like Earth are more likely to be missed by a planet search than other types, as they are so small and orbit so far from their stars. That means that a planet catalogue represents only a small subset of the planets that are actually in orbit around the stars searched.

Dr. Kunimoto and Dr. Matthews used a technique known as ‘forward modelling’ to overcome these challenges.

“We started by simulating the full population of exoplanets around the stars Kepler searched,” Dr. Kunimoto said.

“We marked each planet as detected or missed depending on how likely it was my planet search algorithm would have found them.”

“Then, we compared the detected planets to my actual catalogue of planets.”

“If the simulation produced a close match, then the initial population was likely a good representation of the actual population of planets orbiting those stars.”

The team’s paper was published in the Astronomical Journal.

Study: There Could be 6 Billion Earth-Like Planets in Our Galaxy – Futurism

WASHINGTON — A rocky planet 39 times as massive as Earth has been spotted orbiting a distant star at breakneck speed, with astronomers concluding it may be the surviving core of a planet once perhaps larger than Jupiter that was stripped of its gaseous atmosphere.

Researchers said on Wednesday it is the largest rocky planet ever discovered and would be the first planetary core ever found, offering a unique opportunity to better understand the interiors of gas giants like Jupiter, the largest planet in our solar system.

The planet, called TOI-849b, orbits a star a bit smaller and cooler than the sun, located 730 light years from Earth. A light year is the distance light travels in a year, 5.9 trillion miles (9.5 trillion km).

Gas giants are composed of a solid core surrounded by a vast atmosphere mostly of hydrogen and helium.

“This planet could have been a gas giant like Jupiter, which then lost its outer envelope through some violent evolution. This could be because it collided with another planet towards the end of its formation, or later ventured too close to its host star and was stripped of its atmosphere,” said astronomer David Armstrong of the University of Warwick in England, lead author of the research published in the journal Nature.

“An alternative is that the planet got stuck while forming, building up a core but failing to collect the gas we would normally expect.”

Its diameter of 27,000 miles (43,500 km) is a bit less than Neptune, the smallest of our solar system’s four gas planets, but much larger than Earth’s 7,900 miles (12,700 km). It orbits extremely near its star – much closer than our solar system’s innermost planet Mercury is to the sun – and travels 10 times more quickly than Earth, completing an orbit every 18 hours.

“TOI-849b itself is much more massive than we expect even gas giant planetary cores to be,” Armstrong said, “and this might imply a new planet formation or evolution pathway which we don’t yet understand.”

Astronauts completed their second spacewalk in under a week on Wednesday to replace old batteries outside the International Space Station.

Cmdr. Chris Cassidy and Bob Behnken quickly tackled the big, boxy batteries. For every two outdated batteries coming out, a new and improved one goes in to supply power to the orbiting station on the night side of Earth.

Within a couple hours, the astronauts had installed another new battery, the third one in this latest series of spacewalks. NASA plans to send the pair out twice more in July to complete the battery swap-outs that began in 2017. The new lithium-ion batteries should last the rest of the space station’s life, according to officials.

With their main chore completed, Cassidy and Behnken jumped ahead to loosen the bolts on the batch of old batteries coming out next time and remove other equipment. Some of the bolts required extra muscle, and another stubborn mechanism just wouldn’t come off.

“Boy, it put up a good fight,” Cassidy radioed. “These batteries — they like their home.”

The astronauts had enough time to route power and ethernet cables outside the 420-kilometre-high outpost before the six-hour spacewalk drew to a close.

“Good thing there’s an Earth down there” to tell up from down, Cassidy said.

NASA wants the battery work completed before Behnken returns to Earth in August aboard a SpaceX capsule. He’s one of two test pilots who launched on SpaceX’s first astronaut flight in May.

Paying tourist to get chance to do spacewalk

A space tourist might get a chance to join the prestigious spacewalking ranks — for the right price.

Virginia-based Space Adventures Inc. is seeking a paying customer to not only fly to the space station, but do a spacewalk with an experienced Russian cosmonaut. Before launching from Kazakhstan, the space tourist would need to undergo extra training in Star City, Russia.

Space Adventures is not divulging the cost of the two-week mission. The flight would take up two tourists in 2023, one of whom would step outside. The Russian rocket company Energia has teamed up with Space Adventures for the expedition.

Plenty of specialized training would be needed before someone ventures out on a spacewalk, Behnken told The Associated Press earlier this week.

NASA considers spacewalks one of the riskiest parts of any mission, and astronauts spend hours practising underwater — the closest simulation to spacewalking on Earth.

“I think it could be really challenging for a tourist to go on a spacewalk,” Behnken said.

Any tourist would want multiple practice sessions in order to be “prepared for the space environment.” 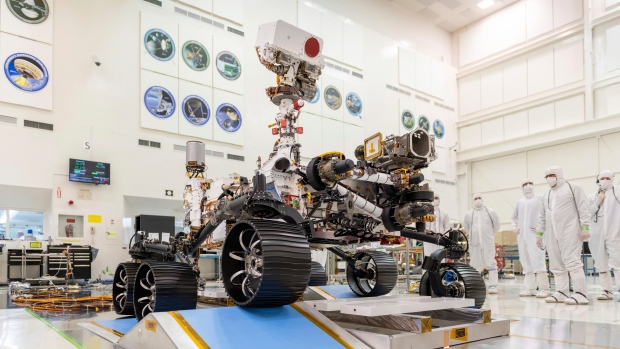 CAPE CANAVERAL, FLA. —
NASA has delayed the launch of its newest Mars rover yet again — to the end of July at the earliest — this time for a rocket issue.

If the Perseverance rover isn’t on its way by mid-August, it will have to wait until 2022 when Earth and Mars are back in proper alignment, costing NASA close to $500 million for the delay alone.

Managers are now targeting no earlier than July 30 for a liftoff from Cape Canaveral, eating up half of the monthlong launch window. The good news is that NASA is trying to eke out more time in this summer’s launch opportunity, now lasting until at least Aug. 15. The chance to fly to Mars comes up only every 26 months.

It is NASA’s most ambitious Mars mission yet, totalling around $3 billion. Besides seeking signs of past microscopic Martian life, Perseverance will gather rocks and soil for eventual return to Earth.

Rocket maker United Launch Alliance needs extra time to deal with a liquid oxygen sensor line that showed questionable readings during a recent practice countdown, officials said Tuesday. Previous technical concerns — including crane trouble at the pad — bumped the launch from the original July 17 to the 20th and then 22nd.

Perseverance will still attempt a touchdown next February in an ancient river delta at Mars, regardless of when it launches.

The United Arab Emirates and China, meanwhile, still are pressing ahead with launches this month or next of Mars spacecraft. Russia and the European Space Agency had to bow out, delaying their Mars rover until 2022 because of delayed spacecraft testing and travel limitations due to the coronavirus pandemic.