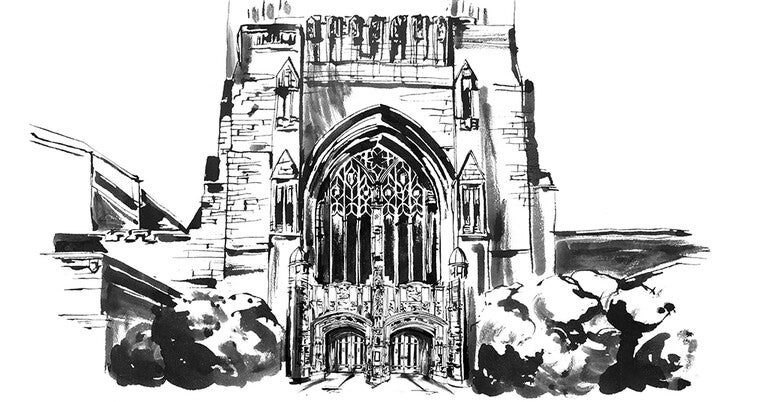 In a Feb. 20 letter to the university community, Swensen offered an update on Yale’s approach to incorporating the risks of climate change in investment decisions. The letter follows another letter Swensen wrote to the Yale community in 2016 offering a first progress report on an effort the Investments Office began in 2014 to give climate-change-related guidance to Yale’s external investment managers, who collectively manage nearly all of the endowment portfolio.

“Climate change,” Swensen writes in his latest letter, “poses a grave threat to human existence and society must transition to cleaner energy sources. This is a formidable task that requires swift and dramatic action on a global scale. The solution involves a combination of government policy, technological innovation and changes in individual behavior.”

Swensen writes that Yale’s greatest impact in fighting climate change will come through its research, scholarship and education, and notes that the university has committed to reducing its own carbon footprint. Yale President Peter Salovey has led an acceleration of these efforts: Provost Scott Strobel has been charged with convening relevant faculty leadership around a university-wide push for planetary solutions, and a committee charged with finding a way to get the campus to net-zero carbon emissions is due to issue a report soon. Meanwhile, Yale continues to be nearly unique in imposing a carbon charge on all of its buildings.

Yale was one of the first institutions to address formally the ethical responsibilities of institutional investors. In 1969, a small group of Yale faculty and graduate students conducted a seminar exploring the ethical, economic, and legal implications of institutional investments; this led to the publication in 1972 of “The Ethical Investor: Universities and Corporate Responsibility,” which established criteria and procedures by which a university could respond to requests from members of its community to consider factors in addition to economic return when making investment decisions and exercising rights as a shareholder. When in that year the Yale Corporation adopted the book’s guidelines, Yale became, according to The New York Times, “the first major university to resolve this issue by abandoning the role of passive institutional investor.” Swensen has been integral to this approach since his arrival at Yale in 1985.

Within the resulting procedural framework, the board of trustees’ Corporation Committee on Investor Responsibility (CCIR) is advised and supported by the Advisory Committee on Investor Responsibility (ACIR), which is composed of faculty, students, staff, and alumni. In 2014, the CCIR considered the request from some students for divestment from the fossil-fuel industry.  The CCIR decided against divestment, largely on the grounds that assigning blame to the supply side of the carbon problem would distract from the fundamental, and shared, problem of demand.

In response to President Salovey’s challenge to find a way to address climate change issues in Yale’s investments, the Investments Office conceived and executed a plan that would guide the endowment toward increasingly green investments. Beginning in 2014, the university has asked all investment managers to incorporate the full costs of carbon emissions in investment decisions. As Swensen notes in the current letter and in his 2016 letter, the university asks its investment managers to avoid investing in companies that disregard the social and financial costs of climate change and that fail to take economically sensible steps to reduce greenhouse gas emissions.

Yale further asks investment managers to assess the greenhouse gas footprint of prospective investments, as well as the costs to expected returns of climate change consequences and of possible future policies aimed at reducing greenhouse gases.

In keeping with this approach, Yale has in recent years, through its investment managers, jettisoned holdings in thermal coal companies and oil sands producers, because they are inconsistent with the university’s investment principles, he reports.

“The remaining thermal coal private investments are on their way out of the portfolio,” Swensen writes. Yale’s investment in thermal coal and oil sands has dropped from 0.24% of the endowment’s market value in 2014 to about 0.02% today, according to the letter.

The letter provides examples of successful steps taken by Yale’s investment managers to improve the environmental sustainability of investments for which they are responsible.

“For many managers, Yale is often one of the more significant investment partners, placing the university in a strong position to influence a manager to incorporate the risks of climate change into investment decisions,” Swensen writes.

Ultimately, he writes, the result of Yale’s approach is that “investments with large greenhouse gas footprints are disadvantaged relative to investments with small greenhouse gas footprints. When taking into account the full costs of climate change, investment capital flows towards less carbon-intensive businesses and away from more carbon-intensive businesses.”

Intel is a good investment and a bad trade, this investor says – Cantech Letter

With an eye on a critical election in populous Uttar Pradesh state early next year, Modi agreed to rescind the laws in November, hoping to smooth relations with the powerful farm lobby which sustains nearly half the country’s 1.3 billion people and accounts for about 15% of the $2.7 trillion economy.

“All incentives to shift towards a more efficient, market-linked system (in agriculture) have been smothered.”

“It appears the government realized that there’s merit in the farmers’ argument that opening up the sector would make them vulnerable to large companies, hammer commodities prices and hit farmers’ income,” said Devinder Sharma, a farm policy expert who has supported the growers’ movement.

But the grueling year-long standoff also means no political party will attempt any similar reforms for at least a quarter-century, Chikermane said.

India ranks 101 out of 116 countries on the Global Hunger Index, with malnutrition accounting for 68% of child deaths.

Yet it wastes around 67 million tonnes of food every year, worth about $12.25 billion – nearly five times that of most large economies – according to various studies.

Ending the rule that food must flow through the approved markets would have encouraged private participation in the supply chain, giving both Indian and global companies incentives to invest in the sector, traders and economists said.

“The agriculture laws would have removed the biggest impediment to large-scale purchases of farm goods by big corporations,” said Harish Galipelli, director at ILA Commodities India Pvt Ltd, which trades farm goods. “And that would have encouraged corporations to bring investment to revamp and modernize the whole food supply chain.”

Galipelli’s firm will now have to re-evaluate its plans.

“We have had plans to scale up our business,” said Galipelli. “We would have expanded had the laws stayed.”

Other firms specializing in warehousing, food processing and trading are also expected to review their expansion strategies, he said.

Poor post-harvest handling of produce also causes prices of perishables to yo-yo in India. Only three months ago, farmers dumped tomatoes on the road as prices crashed, but now consumers are paying a steep 100 rupees ($1.34) a kg.

The laws would have helped the $34 billion food processing sector grow exponentially, according to the Confederation of Indian Industry (CII), an industry group.

Demand for fruits and vegetables would have gone up. And that would have cut surplus rice and wheat output, slicing bulging stocks of the staples worth billions of dollars in state warehouses, economists said.

However, while the federal government now has limited scope for change, local authorities “can opt for reforms provided they have the political will to do so,” said Bidisha Ganguly, an economist at CII.

“Agritech, if it is allowed to take root, has the potential to enable a better handshake of farmers and consumers through their technological platforms,” Chikermane said. (1 = 74.83 rupees) (Reporting by Mayank Bhardwaj and Rajendra Jadhav; additional reporting by Aftab Ahmed; editing by Gavin Maguire and Kim Coghill)

El Salvador President Nayib Bukele said the Central American country had acquired an additional 150 bitcoins after the digital currency’s value slumped again, enlarging his bet on the cryptocurrency despite criticism.

Bitcoin, the world’s biggest and best-known cryptocurrency, is down about 30% from the year’s high of $69,000 on Nov. 10. Bukele said last week that El Salvador had acquired 100 additional coins to take advantage of the currency weakening.

Late on Friday, Bukele announced the government had stepped into the market again.

In September El Salvador became the world’s first nation to adopt bitcoin as legal tender, a move that generated global media attention but also attracted criticism from the opposition and foreign financial institutions.

The International Monetary Fund (IMF) said on Monday that El Salvador should not use bitcoin as legal tender, considering risks related to the cryptocurrency.

Trump first announced the plan to merge with the so-called blank-check firm in October that would help enable him to regain a social media presence after he was kicked off Twitter Inc. and Facebook Inc. platforms. The new enterprise will be in operation by the first quarter of 2022 and plans to start a social media company called Truth Social.