Bianca Andreescu started the season as an up-and-coming teenager eager to make her mark on the WTA Tour. She finished the campaign as one of its top stars.

A murderer’s row of tennis talent — Kerber, Venus, Wozniacki, Svitolina, Pliskova, and of course, Serena — all fell to the upstart Canadian who shone in the key moments and on some of the sport’s biggest stages.

Andreescu capped her unforgettable season Thursday by winning the Bobbie Rosenfeld Award as The Canadian Press female athlete of the year.

“When I step on the court, I know it’s very easy to say, but I try not to focus on who’s on the other side,” Andreescu, a 19-year-old from Mississauga, Ont., said. “I think that’s helped me achieve what I’ve achieved.”

Andreescu’s list of accomplishments over the last 12 months is a long one. She kept one-upping herself throughout the year.

One breakthrough came at Indian Wells last March. A Rogers Cup singles title — the first by a Canadian in 50 years — came in August in Toronto, a few weeks ahead of Andreescu’s history-making turn at the U.S. Open.

“Bianca Andreescu is the only choice for Canada’s female athlete of the year,” said Globe and Mail sports editor Shawna Richer. “Hands down the most dominant performance of any athlete, male or female. This year, a star was born.”

Andreescu nearly swept the year-end poll of broadcasters and editors from across the country.

She picked up 66 of 68 votes (97 per cent) overall, with short-track speedskater Kim Boutin and middle-distance runner Gabriela DeBues-Stafford taking one vote apiece.

Lindsey Vonn proposes to P.K. Subban: ‘Men should get engagement rings too’ – Sportsnet.ca

As federal investigators wrapped up operations at the crash site, NTSB member Jennifer Homendy said preliminary information suggests the plane descended rapidly and was likely in one piece before it slammed into the hill.
“The descent rate for the helicopter was over 2,000 feet a minute, so we know that this was a high energy impact crash,” Homendy said. “This is a pretty steep descent at high speed. So it wouldn’t be a normal landing speed.” 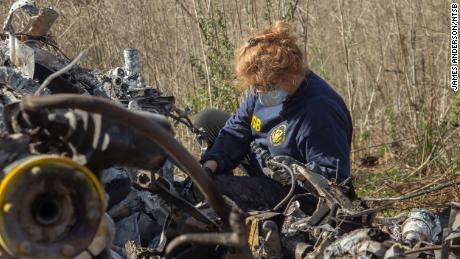 The crash occurred about 1,085 feet above sea level, missing the top of the hill by 20 to 30 feet, investigators said. Parts of the helicopter were found scattered around a crash site that stretched 500 to 600 feet, the NTSB said.

On Tuesday, NTSB turned over the accident site back to local authorities after recovering pieces of the wreckage, an iPad, cellphone and documents including maintenance records, the helicopter’s registration and the airworthiness certificate.
The helicopter did not have a terrain awareness and warning system — a safety feature which provides the pilot with information about the terrain, Homendy said.
The NTSB recommended that similar helicopters be equipped with the system after a fatal Texas crash in 2004 that killed 10 people. The Federal Aviation Administration failed to implement the recommendation, Homendy said. 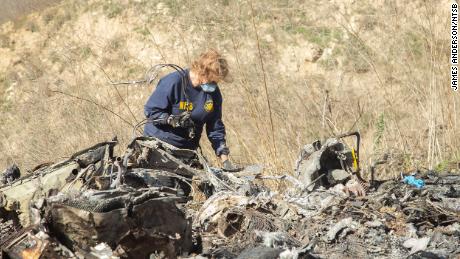 In his last communication with air traffic control, the helicopter’s pilot said he was climbing to avoid a cloud layer, the NTSB previously said. But when air traffic control asked him what he planned to do, there was no response.
Radar data indicated the helicopter climbed 2,300 feet and began a left descending turn, Homendy said.
That last contact was around 9:45 a.m. The first 911 call about the crash came in two minutes later, Los Angeles County Sheriff Alex Villanueva said.

Weather experts are studying that morning

That morning had been particularly foggy.
Visibility was so low Sunday morning that the Los Angeles Police Department had decided to ground its helicopters.
But comparing the police helicopters with the one Bryant was flying in — a Sikorsky S-76B — isn’t accurate, Homendy said.
“It’s an apples to oranges comparison. It’s a different helicopter, different operations, they have 4-person helicopters, this is outfitted for more than that,” she said. “We have to look at this specific crash, this specific helicopter.”
The S-76 line serves as offshore oil and gas transportation, air ambulances, executive transport and search-and-rescue aircraft. One aviation expert calls it a “workhorse.”
Homendy said a weather expert on staff is studying the weather that day and the decision-making behind flying Sunday.
Moments before the crash, air traffic control approved pilot Ara Zobayan’s request to fly with SVFR clearance — special visual flight rules clearance — which allows pilots to fly in weather conditions worse than those allowed for regular visual flight rules.
And while she said that clearance is very common and nothing out of the ordinary, Homendy said investigators will look into whether Zobayan should have been granted that special permission.

Meanwhile, families are grieving the nine people who died Sunday — including 41-year-old Bryant and his 13-year-old daughter, Gianna.
“The first day was brutal,” Matt Mauser, whose wife was killed, said. “I woke up this morning and I said, ‘I’m OK,’ and then I walked out and I started to cry. And then I saw my kids and I started to cry.”
Christina Mauser was an assistant girls basketball coach, former teacher and mother of three. Her youngest daughter is turning four years old next week. Mauser had been recruited by Bryant himself, her husband said, to help coach a team in his basketball academy. 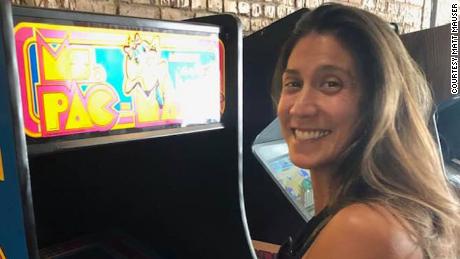 Three young girls on the helicopter — including Gianna — were on their way to a basketball game in Thousand Oaks.
One of them, Alyssa Altobelli, was flying with her parents, John and Keri.
Another, Payton Chester, was flying with her mother, Sarah Chester.
They all were killed in the crash.
“While the world mourns the loss of a dynamic athlete and humanitarian, I mourn the loss of two people just as important … their impact was just as meaningful, their loss will be just as keenly felt, and our hearts are just as broken,” Todd Schmidt, a former principal at the elementary school Payton once attended, wrote in a Facebook post.
Zobayan, who also died, had more than 8,200 hours of flight time, Homendy said, and had been working with Island Express Helicopters, which owned the Sikorsky S-76B.
The LA County Department of Medical Examiner-Coroner announced all nine bodies had been recovered — four of which were officially identified through the use of fingerprints.

Shanahan on 2017 draft: 'I didn't look into' Mahomes enough – theScore

The San Francisco 49ers held the No. 3 overall pick in the 2017 NFL Draft and wanted to add a quarterback, but opted to select defensive lineman Solomon Thomas.

That year’s class, of course, featured Patrick Mahomes and Deshaun Watson. As Kyle Shanahan’s squad prepares to battle Mahomes in Super Bowl LIV, the head coach admitted he should have scouted the 2018 MVP more extensively.

“I didn’t look into (Mahomes) obviously as much as I should have (prior to the draft),” Shanahan told reporters Tuesday, according to NFL.com’s Nick Shook. “We definitely looked into him, studied all of his tape. Was just a freak, could make any throw. … We had the second pick in the draft. Did not feel, like from all the intel that you get and stuff, that he was gonna go that high.”

On draft day, San Francisco traded the No. 2 pick to the Bears (which Chicago used to draft Mitch Trubisky) and received the No. 3 selection as part of the return. The Kansas City Chiefs selected Mahomes 10th overall after trading up.

Shanahan added, “You saw a bunch of talented guys in that draft. It’s very tough when you watch college systems. … You can see ability, you can see talent, but how’s the mind? How do they play in the pocket? How do they process? That’s not just an IQ score. That’s some stuff I don’t think you can totally test. You gotta go through that with them, so there’s always a risk when you spend a first-round pick on a quarterback. With the situation we were in, (we) didn’t want to be that risky.”

Shanahan was entering his first season as San Francisco’s head coach and had targeted then-Washington Redskins quarterback Kirk Cousins. The team slapped Cousins with the franchise tag in 2017 and he was widely rumored to be a trade candidate.

“It was a little different situation for us just ’cause I think it’s pretty well documented … the relationship I had with Kirk being in Washington and I felt very confident that he wasn’t gonna stay there,” Shanahan said. “So anytime you go into a season knowing that a franchise quarterback was going to be available the next year, it made me a lot more picky.”

After failing to acquire Cousins, the 49ers traded for Jimmy Garoppolo and found themselves NFC champions two campaigns later. Garoppolo and Mahomes will face off Sunday for the right to hoist the Lombardi Trophy. 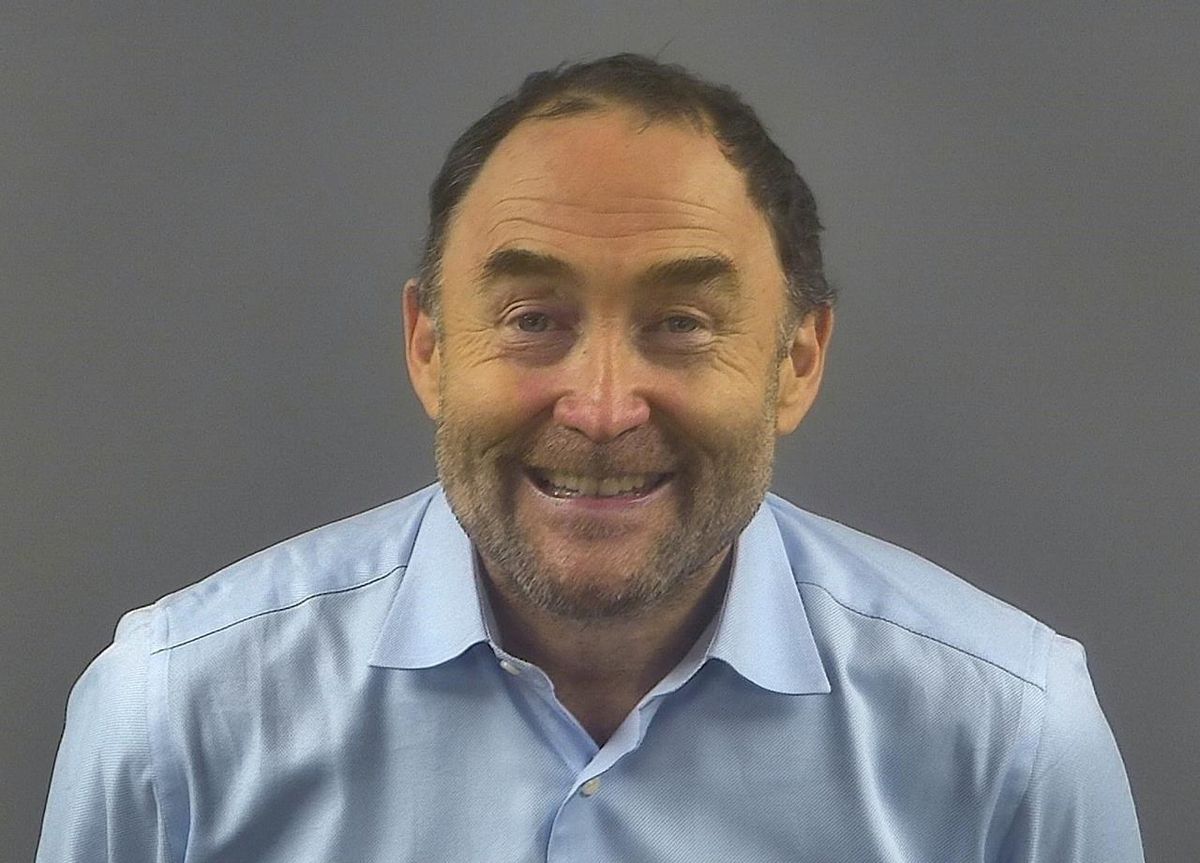 Former NHL star goaltender Ed Belfour has been arrested for criminal mischief and alcohol intoxication in a public place after an incident in a hotel early Tuesday morning.

The arrest report says Belfour was lying on the floor clutching a curtain rod that had been ripped out of the dry wall above a window when police approached him.

The report adds that Belfour was kicking a door to the locked spa in an attempt to get in. It says he had slurred speech, bloodshot eyes and could barely stand up.

The police say Belfour was not being compliant when officers tried to put handcuffs on him.

Belfour was inducted into the Hockey Hall of Fame in 2011. He played 963 NHL games with the Chicago Blackhawks, San Jose Sharks, Dallas Stars, Toronto Maple Leafs and Florida Panthers from 1988 to 2007.

Warcraft III: Reforged interview — The struggles and lessons of remaking a classic – VentureBeat