U.S. consumer prices rose solidly in November as Americans paid more for food and a range goods, leading to the largest annual gain since 1982, posing a political nightmare for President Joe Biden’s administration and cementing expectations for the Federal Reserve to start raising interest rates next year.

The report from the Labor Department on Friday, which followed on the heels of a slew of data this month showing a rapidly tightening labor market, makes it likely the U.S. central bank will announce that it is speeding up the wind-down of its massive bond purchases at its policy meeting next week.

With supply bottlenecks showing little sign of easing and companies raising wages as they compete for scarce workers, high inflation could persist well into 2022. The increased cost of living, the result of shortages caused by the relentless COVID-19 pandemic, is hurting Biden’s approval rating. The White House and the Fed have characterized high inflation this year as transitory.

“There’s not much room to explain away this inflation from pandemic or reopening anomalies,” said Will Compernolle, a senior economist at FHN Financial in New York. “Inflation is a tax, gas and food are among the most regressive aspects of it. Lower-income Americans spend disproportionately on both.”

Food prices rose 0.7%. The cost of food at home increased 0.8%, driven by a jump in the price of fruits and vegetables, meat, and cereals and bakery products. The price of food consumed at home gained 6.4% over the past 12 months, the most since December 2008. Dining out was also more expensive last month.

In the 12 months through November, the CPI accelerated 6.8%. That was the biggest year-on-year rise since June 1982 and followed a 6.2% advance in October. Economists polled by Reuters had forecast the CPI would climb 0.7% and rise 6.8% on a year-on-year basis.

Biden acknowledged the increased burden on household budgets from the high inflation, while trying to reassure Americans that the country was pushing ahead with efforts to ease supply bottlenecks.

“We are making progress on pandemic-related challenges to our supply chain which make it more expensive to get goods on shelves, and I expect more progress on that in the weeks ahead,” Biden said in a statement.

Indeed, gasoline prices have been trending lower since the end of November. That helped to lift consumer sentiment in early December, a separate survey from the University of Michigan showed on Friday.

(Graphic: Consumer sentiment: the present vs the future, https://graphics.reuters.com/USA-STOCKS/lbpgnlwwkvq/umich.png)

The government reported last week that the unemployment rate fell to a 21-month low of 4.2% in November. Tightening labor market conditions were underscored by a report on Thursday showing new applications for unemployment benefits dropped to the lowest level in more than 52 years last week.

Other data this week showed there were 11 million job openings at the end of October and Americans quit jobs at near-record rates. Fed Chair Jerome Powell has said the U.S. central bank should consider hastening the tapering of its bond purchases at its policy meeting next week.

“The Fed has little choice but to accelerate tapering and prepare for the possibility of much earlier rate hikes than it was planning just a few months ago,” said Sal Guatieri, a senior economist at BMO Capital Markets in Toronto.

Excluding the volatile food and energy components, the CPI rose 0.5% last month after gaining 0.6% in October. The so-called core CPI was supported by rents, with owners’ equivalent rent of primary residence, which is what a homeowner would receive from renting a home, rising a solid 0.4%.

Airline fares rebounded 4.7%. But gains are likely to be curbed by the spread of the Omicron variant of COVID-19, which could make some people hesitant to travel by air. The United States is already experiencing a resurgence in coronavirus infections, driven by the Delta variant.

But the cost of motor vehicle insurance fell. Recreation prices dropped after nine straight months of gains. The so-called core CPI jumped 4.9% on a year-on-year basis, the largest rise since June 1991, after increasing 4.6% in October.

The Fed tracks the personal consumption expenditures (PCE) price index, excluding the volatile food and energy components, for its flexible 2% inflation target. The core PCE price index surged 4.1% in the 12 months through October, the most since January 1991. Data for November will be released later this month.

Economists expect the year-on-year CPI could top 7% before falling back and the core CPI rate could rise above 6%.

“The recent strength in CPI and PCE inflation reflects both factors that are temporary and should fade over time and factors that could be more persistent,” said Daniel Silver, an economist at JPMorgan in New York. “But the tightening in the labor market likely will continue over time and this should keep upward pressure on inflation.” 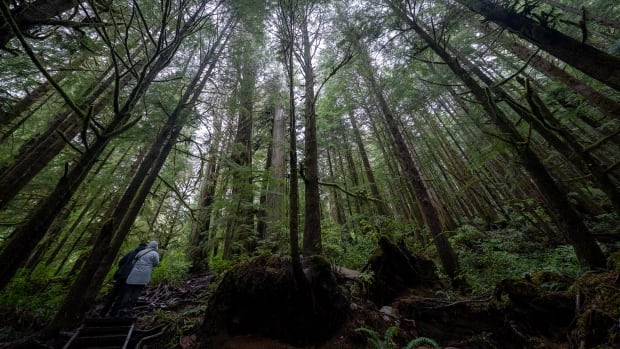 Logging will be temporarily deferred in approximately 2,500 hectares of old-growth forest following an agreement between four Vancouver Island First Nations and a forestry company.

The Nanwakolas Council, which represents four First Nations, and Western Forest Products have agreed to defer old-growth logging in a section of forest north of Campbell River, for two years.

The deferral includes preservation of 10 square kilometres of forest identified by an old-growth advisory panel as needing protection.

Another 15 square kilometres of priority ancient forests were also deferred through other agreements between the nations and the forestry firm.

In November, the government said it would defer the logging of B.C.’s rarest old-growth trees and gave 200 First Nations a deadline to say if they supported the deferrals or if they thought further discussion was required.

Nanwakolas Council president Dallas Smith used a pop-culture reference to summarize his reaction to the agreement.

“If you’re a Star Wars person, I feel like Luke Skywalker in the newer movies – we have our Jedi powers now and we’re not questioning whether we are or not,” Smith said.

“We are First Nations and we are in control of this. And it’s like Yoda said, ‘Do or do not. [There is] no try.’ And we’re doing it now.”

First Nations waited for years to ensure their cultural values were incorporated to discussions about forests and all that they hold, Smith said, adding that came together with the agreement.

Smith said unlike in the past, those solutions will come from First Nations, be rooted in Indigenous values, but still look after the economic concerns of the region.

Smith said another part of their agreement is that any other harvesting will have to be done after approval with all First Nations communities.

“A temporary deferral is a step in a long-term partnership and vision for forest management that will benefit local communities and ecosystem health,” she said at a news conference.

Tegan Hansen, a forest campaigner at Stand.earth, says all deferrals recommended by the old-growth advisory panel should happen now.

“I’m really not hopeful if the province tries to piecemeal small deferrals over a very long period of time when what we need to see is a process where instead of nations having to opt in to logging deferrals, we have deferrals as a base, which is what the recommendation is, and nations can opt in to logging as they choose on their territories,” Hansen said.

“So we’re really seeing a flip in the order of process in terms of what the old growth strategic review set out for the province.”

When Dwight Law’s father died in November, the Shanghai-based U.S. expat flew back to Kansas, leaving his wife and dog behind in China while he attended to matters relating to his father’s death.

Law, who runs an architecture and design firm, has lived in Shanghai for 20 years and had expected to return last week.

But with dozens of flights between China and the United States suspended by Chinese authorities because of passengers testing positive for COVID-19 on arrival, finding a flight back even in February is proving near-impossible and posing a threat to Law’s company.

“Now with no flights scheduled, I am currently locked out of China, away from my wife and family and not able to attend to business,” Law said. “I have 50 employees in China. Without my presence, the business will suffer and so will the livelihoods of each employee.”

Even before the latest flight cancellations, international capacity to and from China was running at just 2% of pre-COVID levels as the country sticks to a strict zero-COVID policy of stamping out all cases while other parts of world open up.

The zero-COVID mentality is likely to stay for most of 2022, Bank of America Securities analysts said in a note on Tuesday, in bad news for the 845,000 foreign passport holders in China, a number already reduced since the start of the coronavirus pandemic.

That was the most in a month since it introduced a policy of suspending flights when positive cases were found in June 2020.

The flight suspensions, which also include some services to Europe and other parts of Asia, are one of the biggest challenges faced by companies doing business in China, said a spokesperson for the Europe Chamber of Commerce in China.

“The recent cancellations send a clear message that China will not deviate from its current strategy,” the spokesperson said, referring to the zero-COVID policy.

China now requires passengers to have started costly COVID tests seven days before boarding in the departure city of their direct flight into China. That creates a headache for travellers like Law who are not based in U.S. cities with direct flights.

A Google Flights search by Reuters shows no flights from San Francisco to Shanghai are available for booking until late March at any price.

Jing Quan, minister of the Chinese embassy in the United States, said Beijing is working closely with the U.S. State Department to strike a balance on the number of commercial flights to China. Charter flights for Olympics athletes have not been affected, he said.

There has also been less of an impact on cargo. China Southern Airlines plans to fly its A380 superjumbos with cargo only from Los Angeles to Guangzhou, while carrying passengers in the other direction, it told the U.S. Department of Transportation (DOT).

While that is a comfort to exporters, it provides little solace to stranded travellers like Law.

“COVID will not go away I am afraid. It is here to stay,” he said. “What’s China going to do, close its borders for the next five or 10 years while the world outside of China learns to manage, live and gain herd immunity? It’s nuts.”

(Reporting by Stella Qiu in Beijing and Jamie Freed in Sydney; additional reporting by Martin Pollard in Shanghai; Editing by Raju Gopalakrishnan)