The United Nations on Friday announced the appointment of Catherine Russell, an aide of U.S. President Joe Biden, as the next executive director of the U.N. children’s agency UNICEF, a U.N. spokesperson said on Friday.

Russell, currently director of the White House Presidential Personnel Office and assistant to the president, will mark the eighth American to head UNICEF. Since it was established in 1946, all of the agency’s executive directors have been American.

Russell formerly served as ambassador-at-large for global women’s issues at the U.S. Department of State under the administration of former President Barack Obama, the U.N. said.

A U.N. spokesperson in July said outgoing UNICEF Executive Director Henrietta Fore planned to step down to deal with a family health issue.

Fore, a former head of the U.S. Agency for International Development (USAID), was appointed to run UNICEF by U.N. Secretary-General Antonio Guterres in 2018.

Despite growing concerns across the globe last fall over the new COVID-19 variant, Omicron, Sandy Long and her husband departed on Nov. 28 for a 10-day vacation in Mexico.

Long said they felt comfortable travelling, because they planned to take strict safety precautions. Plus, the couple hadn’t gone abroad for two years due to the pandemic and were yearning to get away.

It appears many Canadians have a similar attitude toward travel these days despite Omicron’s fast and furious spread, which prompted Canada to repost its advisory against non-essential international travel last month.

When adjusted to account for recent changes in tracking air travel, that total is almost six times the number of arrivals for the same month in 2020, and more than half the total for pre-pandemic December 2019.

The increase in international travel is likely to continue: there were 216,752 Canadian air-passenger arrivals to Canada during the week of Jan. 3 to Jan. 9, according to the latest data posted by the Canada Border Services Agency.

Travel agency owner Lesley Keyter said that, since October, the number of clients booking trips has jumped by between 30 and 40 per cent compared to the same time last year.

She said popular destinations for her clients, most of whom are aged 50 or older, include Europe, Mexico and Costa Rica. When Omicron cases started to surge in December, Keyter said some clients cancelled their trip, but most kept their travel plans.

“People are saying, “Listen, we only have a limited time on this planet.… We’ve put off travel for two years now, I don’t want to put it off anymore,” said Keyter, owner of The Travel Lady Agency in Calgary.

She said travellers also feel confident with the added protection of their COVID-19 vaccine and booster shot. Because Omicron is so transmissible and more able to evade vaccines, even vaccinated people may get infected, however, they’re less likely to wind up in the hospital.

To enter Canada, air passengers must show proof of a negative COVID-19 test taken within 72 hours of departure. If a traveller tests positive, they must wait at least 11 days before boarding a flight home.

Brennan Watson, 26, of Milverton, Ont., tested positive on Dec. 28 while travelling in Ireland.

He was set to fly home the following day, but instead had to find a place to self-isolate in Belfast. Due to Canada’s rules at the time — which have now changed — Watson had to wait 15 days before he could fly home.

“It was very stressful in the beginning,” he said. “It was a bit of a panic just to think that I’m stuck here.”

Brennan said the delay cost him: he missed 11 days of work as an electrician and spent $2,000 in added expenses, including another plane ticket home.

“There’s nothing you can really do about it,” he said. “It’s just something I didn’t even think would happen.”

The federal government is urging Canadians to stay home or, if they must travel, to plan ahead for quarantine and ensure they have travel insurance coverage. 3:14

Travel insurance broker Martin Firestone said travellers can avoid such unexpected costs by purchasing trip-interruption insurance. He said most of his clients now opt for the coverage that will reimburse travellers for some or all of their costs if they test positive and must extend their trip.

“Trip interruption — which used to be a very rarely [purchased product] — is now being added to all the emergency medical plans, because clients worry terribly about testing positive,” said Firestone with Travel Secure.

“That’s the new world we live in right now with the pandemic.”

Another hurdle travellers may face is unexpected flight cancellations.

Since December, thousands of flights in Canada and the U.S. have been cancelled for pandemic-related reasons including crew members out sick due to the virus.

Long said she and her husband enjoyed their trip to Mexico so much, they had planned to return again in the upcoming weeks. However, the couple recently nixed their plans due to concerns over flight cancellations.

“It’s the uncertainty right now,” said Long. “I don’t want to get down there and then be stranded.”

However, she’s still optimistic about a trip the couple has booked in May to Spain.

Despite testing positive while travelling, Brennan hopes to return to Ireland this summer — even if the pandemic hasn’t waned by then.

“I spent a year and a half of my life not seeing family, not seeing friends,” he said. “I’m not going to stop living my life.” 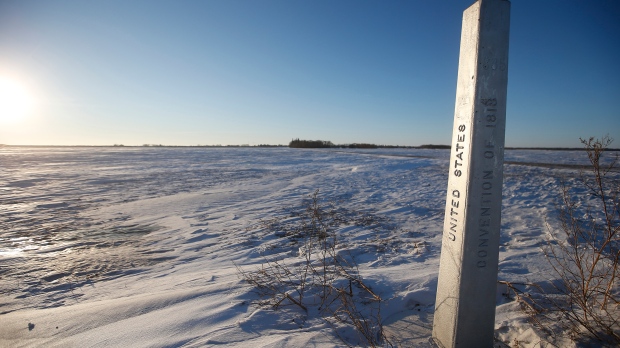 PEMBINA, N.D. —
The discovery of four people who perished in the cold trying to cross the Canada-U.S. border could put a new twist on the immigration debate in the United States.

The group, which included an infant and a teen, were found Wednesday near Emerson, Man., just metres from the Canadian side.

U.S. officials allege they were part of a larger group of Indian migrants trying to cross into the U.S. from Canada.

Border expert Kathryn Bryk Friedman, a University at Buffalo law professor, calls it a troubling sign that the country’s immigration challenges are getting worse.

Friedman says the discovery is likely a “warning shot” that more people are willing to put their lives on the line to enter the U.S., even on foot in the dead of winter.

“I do think it’s a warning shot,” said Friedman, who remarked about the enduring appeal life in the U.S. seems to hold for people all around the world.

Indeed, the crush of South American migrants at the U.S.-Mexico border has become a defining characteristic of American politics in recent years, most notably during the tenure of former president Donald Trump.

Nor is Canada a stranger to the problem: thousands of asylum seekers crossed the border in Quebec each year while Trump was in office, though the numbers have dropped precipitously since then.

But an organized effort to sneak groups of people into the U.S. from Canada is a new one on Friedman.

“It just demonstrates the allure still — maybe the enduring allure — of trying to get to the United States. It’s really kind of fascinating,” she said.

But a single incident isn’t likely to prompt either country to seriously rethink the way they manage and defend their shared frontier, she added.

“This sounds terrible, but I think it’s going to take more than four people dying at the border to really galvanize action on the part of Canada and the United States.”

This report by The Canadian Press was first published Jan. 22, 2022. 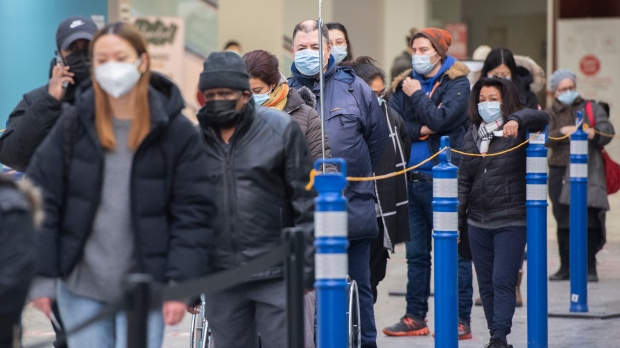 Canada’s top doctor has said the latest wave of COVID-19 driven by the Omicron variant may have reached its peak.

But while the modelling appears encouraging, experts say the news should be interpreted with cautious optimism.

Chief Medical Officer of Health Dr. Theresa Tam told reporters on Friday that there are “early indications that infections may have peaked at the national level” based on daily case counts, test positivity, the reproduction number and wastewater data.

“I hope we’re at or nearing the peak, but the problem that I have is where we’ve got some uncertainty in the counting now since we don’t do as much PCR testing as we once did,” Dr. Ronald St. John, former director-general of the Public Health Agency of Canada’s Centre for Emergency Preparedness and Response, told CTV News Channel on Saturday.

Due to the shortages in PCR testing capacity, many people who develop COVID-19, particularly if they’re not in a high-risk group and have mild or no symptoms, have been unable to get PCR tests.

“We can’t count people who are asymptomatic, so we have to look at other datasets (like) wastewater concentration, things like that, to try to get an understanding of where we are.” St. John said.

Dr. Jason Kindrachuk, an infectious disease expert at the University of Manitoba, says the news shows “some optimism that things will slowly get back to normal, what they were like prior to Omicron.”

“I think we’ve learned over and over again from the pandemic is that you know, cases rise and then hospitalizations lag behind … and that trend also stays in place when cases start to recede,” he told CTVNews.ca over the phone on Saturday.

“You may be able to slow down that hospitalization rate over time, but you are still going to have pressure on a health-care system that that has been pushed to its limits.”

Dr. Christine Palmay, a Toronto-based family physician, says the hospitalization and ICU data also leave out a lot of patients dealing with debilitating symptoms. She and her colleagues have seen numerous patients who have tested positive for COVID-19 and are struggling with the virus at home.

“They’re not captured by ICU stats. They’re not necessarily accessing ER, but they’re not functioning,” she said.

Wastewater data in B.C. and Alberta have also shown signs that the virus may have peaked. However, health officials in Manitoba and Saskatchewan say it’s too early to tell.

“When you start to remove those safety breaks, you have the potential that things could start to build back in the opposite direction. So, we have to do it very methodically and certainly with a lot of oversight,” he said.

“We have to wait and stick to our public health measures as long as possible until we can be absolutely sure that we’re coming out of the woods, and I’m not sure that we are yet,” he said.