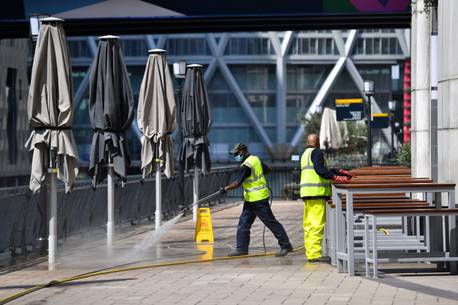 LONDON (Reuters) – Britain’s economy remained in a severe downturn in May although the pace of the slump moderated from April’s crash and some companies benefited from the easing of coronavirus lockdowns around the world, a survey showed on Wednesday.

The IHS Markit Purchasing Managers’ Index (PMI) combining Britain’s huge services sector and manufacturing rose to 30.0 from 13.8 in April, up from a preliminary May reading of 28.9.

The index for services alone was also slightly higher than the preliminary figure but at 29.0 it was the second-weakest on record after April’s crash to 13.4.

Expectations rose modestly for a second month from March’s low. But businesses dealing face-to-face with customers were extremely concerned that social distancing measures would hold them back and push up costs.

On the positive side, some companies saw new orders from the Asia-Pacific region, where the recovery is more advanced, and from new online sales efforts.

But export orders continued to fall and some services firms said they were not taking work from abroad due to severe restrictions on travel.

Britain’s services PMI does not include retailers, who have been hardest hit by store closures since the March 23 lockdown, or many of the self-employed.

Swiss Economy Slumps the Most in Decades – BNNBloomberg.ca

Swiss Economy Slumps the Most in Decades – Yahoo Canada Finance

British Columbia’s finance minister is expected to paint a bleak picture of the pronvice’s economy on Tuesday, more than four months after the global coronavirus pandemic started.

Carole James will provide her first fiscal update since February’s budget and is expected to show forecasted deficits for at least the next three years.

The province has earmarked $5 billion for immediate coronavirus financial relief, including $1.5 billion put aside for economic recovery.

The province has also seen a sharp decline in revenues associated with a significant drop-off in tourism and consumer spending.


2:03
B.C. adds jobs but lags behind other provinces in COVID-19 recovery

B.C. adds jobs but lags behind other provinces in COVID-19 recovery

“We all know the profound impact COVID-19 has had around the globe, across our country and in fact right here in British Columbia,” James said.

Read more:
B.C. employment affected by COVID-19 more than any other province: poll

Economists are mixed on what the overall impact will be on British Columbia’s economy. The Business Council of British Columbia is forecasting the provincial economy will shrink by 7.8 per cent. Deloitte expects B.C.’s economy to shrink by around five per cent this year.

The financial outlook would be worse if a second wave of the virus comes in the fall. A second wave could potentially lead to more economic instability globally.

“I wish I had a crystal ball that could show us where we are going,” James said. “There are so many pieces, so many risks ahead, that continue to show the uncertainty. Whether it’s a second wave, or a shift in other jurisdictions that impact our exports and the work we do here.”

The B.C. government has introduced legislation legally allowing it to run deficits. Previously, British Columbia was not allowed to run budget deficits.

In February, James introduced a budget with a $227-million surplus, but the COVID-19 crisis has rattled the foundations of the province’s fiscal outlook.

The federal government is expecting the national deficit to soar to $343 billion this year. Finance Minister Bill Morneau warned last week the national economy may never go back to normal and there is no indication of a roadmap for when or how the government plans to rein in spending.

The fiscal snapshot from Ottawa shows a very real likelihood that the Canadian economy and consumer habits may not soon — if ever — return to what they were pre-COVID-19.

B.C. Liberal leader Andrew Wilkinson says even amidst the uncertainty the provincial government should outline an economic recovery plan.

“The federal government has spent almost $7,000 per person in Canada and the provincial NDP can’t figure out how to even spend $300 a person,” Wilkinson said.

“There are a lot of small businesses who are about to fail this fall. We’ve got families who are desperately trying to figure out what to do when school goes back because they don’t know which days are school days and that is going to hurt working women really hard because they won’t have a predictable opportunity to work.” 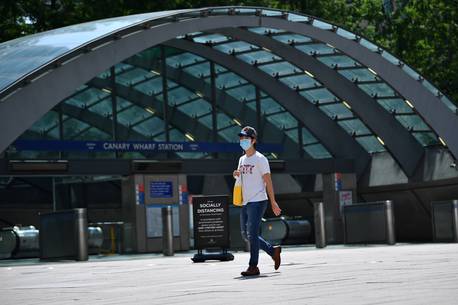 LONDON (Reuters) – Britain’s economy could shrink by more than 14% this year and government borrowing risks approaching 400 billion pounds ($500 billion) if there is lasting damage from the coronavirus, government budget forecasters warned on Tuesday.

The Office for Budget Responsibility said its central scenario, with only moderate scarring, showed a 12.4% fall in output, with a 14.3% decline if scarring is deeper.

Under an ‘upside scenario’ – which it said was an update of the sole scenario it presented in April – output would fall by 10.6%, while government borrowing would be limited to 263 billion pounds.

WASHINGTON – Prime Minister Justin Trudeau urged Donald Trump to think twice Monday before imposing new tariffs on Canadian aluminum, saying the sector is emerging from the pandemic-induced production stance that prompted the White House to consider such measures in the first place.

Trudeau, who said in a news conference he had spoken to the U.S. president earlier in the day, told him that with the North American economy getting back up to speed, Canada’s aluminum smelters would soon be back producing value-added specialty products for the American auto sector.

The spectre of new tariffs emerged last month after Canadian producers, unable to shut down production and with their usual customers hamstrung by the impact of COVID-19, were forced to make a more generic form of aluminum and ship it to warehouses in the United States.

That alarmed certain U.S. smelter owners and operators, who have been urging the U.S. trade representative’s office to slap fresh levies on imports from Canada.

The pandemic “caused certain disruption in the aluminum sector that is starting to realign itself, given the economies are starting up again and manufacturing is getting going,” Trudeau said after his call with Trump.

“I impressed upon him that it would be a shame to see tariffs come in between our two countries at a time where we’re celebrating NAFTA and at a time where we want our businesses and our manufacturers to get going as quickly as possible.”

Canada has been on the outside looking in when it comes to the coming into force of NAFTA’s successor, the U.S.-Mexico-Canada Agreement, which took shape in 2017 and 2018 before a backdrop of steadily worsening relations between Trump and Trudeau.

While Trump welcomed Mexico’s President Andres Manuel Lopez Obrador to a celebratory event at the White House last week, Trudeau kept his distance, citing the tariff dispute and the ongoing COVID-19 pandemic among his reasons. A readout from Monday’s call said the prime minister “expressed regret” for being unable to attend.

The U.S. trade representative reportedly gave Canada a deadline of July 1 to impose export restrictions – the very day the USMCA took effect. That deadline has come and gone without a hint from either the White House or U.S. trade ambassador Robert Lighthizer about what happens next.

Trudeau said he and Trump also discussed the Canada-U.S. border, where non-essential travel has been curtailed since March in an effort to limit the spread of the novel coronavirus. The 30-day bilateral agreement to limit discretionary cross-border travel without restricting trade or essential workers has been extended three times and is now set to expire July 21.

Since the last extension, however, the public health crisis in the U.S. has exploded.

More than 100,000 new COVID-19 cases were identified over the weekend, particularly in southern states that reopened early, with Florida emerging as the new epicentre. Canada has had 108,000 confirmed cases in total, compared with more than 3.3 million cases and 135,000 deaths in the U.S. to date.

Hospitals in major urban centres across the United States are again nearing capacity and health care workers face another critical shortage of personal protective equipment like masks and respirators.

But there could be other lingering foreign-policy irritants at play, she added.

“I wonder if the United States had treated our dear neighbour, friend and ally a little bit better over the last three-and-a-half or so years, if the reaction would be as harsh,” Friedman said. “Maybe people are just like, ‘Well, too bad, I don’t care if you want to open the border.”’

Friedman is among several Canada-U.S. experts, border community leaders, northern state lawmakers and others who want to see a plan for when the time comes to lift the restrictions.

It’s less a question of when and more a question of how, Friedman said – what sort of controls, testing and screening measures and other tools will need to be in place even after the emergency has passed.

“I’m more concerned that the climate will change, and some relevant government officials won’t have given any thought to how this border opening is going to take place,” she said.

“We have to get our act together and really think more clearly about how we’re going to handle these kinds of situations in the future, and really use science-based data – an evidence-based, science-based approach – to health screenings when it comes to border restrictions and border policies.”

Trudeau demurred Monday when asked whether this time, Canada and the U.S. might negotiate a closure that lasts longer than the standard 30-day window.

“We will be discussing with our American partners what the next steps should be, and I think this is a situation that is evolving rapidly and we need to keep responding to the situation on the ground.”

This report by The Canadian Press was first published July 13, 2020.