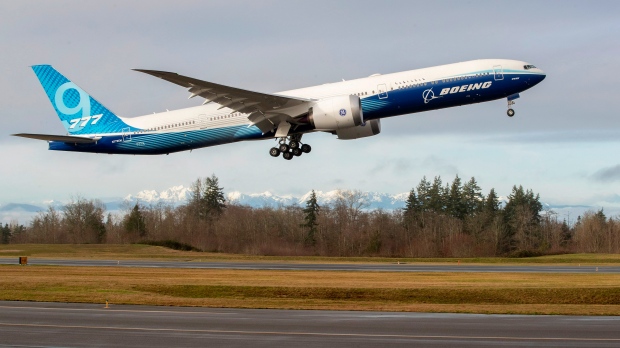 United Airlines is removing all of its Boeing 777 planes currently in service that are powered by Pratt & Whitney 4000 series engines after the Federal Aviation Administration called for stepped-up inspections.

The airline announced Sunday it was immediately removing the planes “out of an abundance of caution.” The 24 aircraft are part of the 52 777s in the United fleet. The other 28 remain in storage.

The move is voluntary and temporary, United said, and should disrupt only “a small number of customers.”

The announcement came after the FAA issued an emergency order saying it would be stepping up inspections of Boeing 777 airplanes equipped with certain Pratt & Whitney PW4000 engines.

“We reviewed all available safety data following yesterday’s incident,” FAA Administrator Steve Dickson said, referring to the United Airlines flight that was forced to return to Denver International Airport on Saturday after it suffered an engine failure shortly after takeoff, causing debris to fall in greater Denver.

“Based on the initial information, we concluded that the inspection interval should be stepped up for the hollow fan blades that are unique to this model of engine, used solely on Boeing 777 airplanes,” Dickson said.

The National Transportation Safety Board said Sunday an initial examination of the Pratt & Whitney PW4077 engine from United Airlines Flight 328 showed that two fan blades were fractured and the remaining blades exhibited damage “to the tips and leading edges.”

These are preliminary findings and should not be taken as conclusive of what went wrong Saturday, but they are still significant.

Investigators believe a fan blade in the engine of the Boeing 777 that experienced a catastrophic engine failure on Saturday came off and took out another blade, a source familiar with the situation told CNN.

Sunday night, Boeing recommended the suspension of all of its 777 aircraft that have the Pratt & Whitney 4000 engines.

“While the NTSB investigation is ongoing, we recommended suspending operations of the 69 in-service and 59 in-storage 777s powered by Pratt & Whitney 4000-112 engines until the FAA identifies the appropriate inspection protocol,” Boeing’s statement read.

According to the most recent registry data, the only airlines that operate with the affected engines are in the United States, Japan and South Korea. United is the only US operator with this type of engine in its fleet.

“Boeing supports the decision yesterday by the Japan Civil Aviation Bureau, and the FAA’s action today to suspend operations of 777 aircraft powered by Pratt & Whitney 4000-112 engines. We are working with these regulators as they take actions while these planes are on the ground and further inspections are conducted by Pratt & Whitney,” the company said Sunday in its statement.

The NTSB said the “investigator-in-charge for this event along with a powerplant specialist” traveled from Washington to Denver on Sunday morning to assist local NTSB investigators.

The agency said it will be examining “the engine, airplane and the photographs and video taken by passengers aboard United flight 328.” The NTSB will also review the flight data and cockpit voice recorders.

By Shariq Khan and Matt Scuffham

(Reuters) – Credit Suisse Group AG has told customers in recent months it will no longer execute transactions in shares of cannabis companies with U.S. operations or hold them on behalf of clients, a cannabis company executive and other industry sources told Reuters on Wednesday.

The Swiss lender was among a handful of banks that had been willing to buy and sell marijuana-related stocks for clients in the United States and hold those shares as a custodian.

Cannabis remains illegal under U.S. federal law, even though many states have legalized its use. This represents a legal risk for investment banks working for companies that produce or trade the drug.

Credit Suisse’s compliance and risk management procedures have come under scrutiny from investors and analysts after it lost at least $4.7 billion from the collapse of Archegos, an investment firm dedicated to managing the fortune of hedge fund veteran Bill Hwang, as well as the suspension of funds linked to insolvent supply chain finance company Greensill.

The MSOS exchange-traded fund, which tracks U.S. marijuana stocks, has fallen by more than a fifth since early February. Several market players said they believed Credit Suisse’s actions played a role in the selloff.

“That led to a significant selloff.”

A custodian bank holds customers’ securities for safekeeping, to prevent them from being stolen or lost, while also collecting dividends and handling other corporate actions. It plays an important role in helping many investors to hold shares in companies.

The weed industry has boomed over the last three years, as Canada and a succession of U.S. states, including most recently New York and New Jersey, legalized recreational use.

Credit Suisse shares are down over 20% so far this year, and the bank has said it is cutting its prime brokerage business, which caters to hedge fund clients, by about a third.

TORONTO (Reuters) – Sun Life Financial Inc on Wednesday missed analyst estimates for first-quarter core profit, which rose from a year earlier due to business growth and earnings in its asset management and Canadian units.

TORONTO (Reuters) – Manulife Financial and Sun Life Financial Inc on Wednesday reported increased core profits from a year ago, driven in part by business growth and improved earnings across all major business units.

Payouts globally have risen due to claims related to the coronavirus pandemic, but strength in stock markets has helped soften some of that impact. Earnings of Canada‘s top two insurers were affected by steepening yield curves in North America.

While it tempered Sun Life’s results, the No. 2 insurer still saw reported profit more than double from a year ago as a result of favourable equity markets and interest rate changes.

Sun Life also took an after-tax restructuring charge of C$57 million related to changes it is making to its workspace, the company said.