The pace of U.S. hiring accelerated in June, with payrolls increasing by the most in 10 months, suggesting firms are having greater success recruiting workers to keep pace with the economy’s reopening.

Nonfarm payrolls jumped by 850,000 last month, bolstered by strong job gains in leisure and hospitality, a Labor Department report showed Friday. The unemployment rate edged up to 5.9 per cent because more people voluntarily left their jobs and the number of job seekers rose. 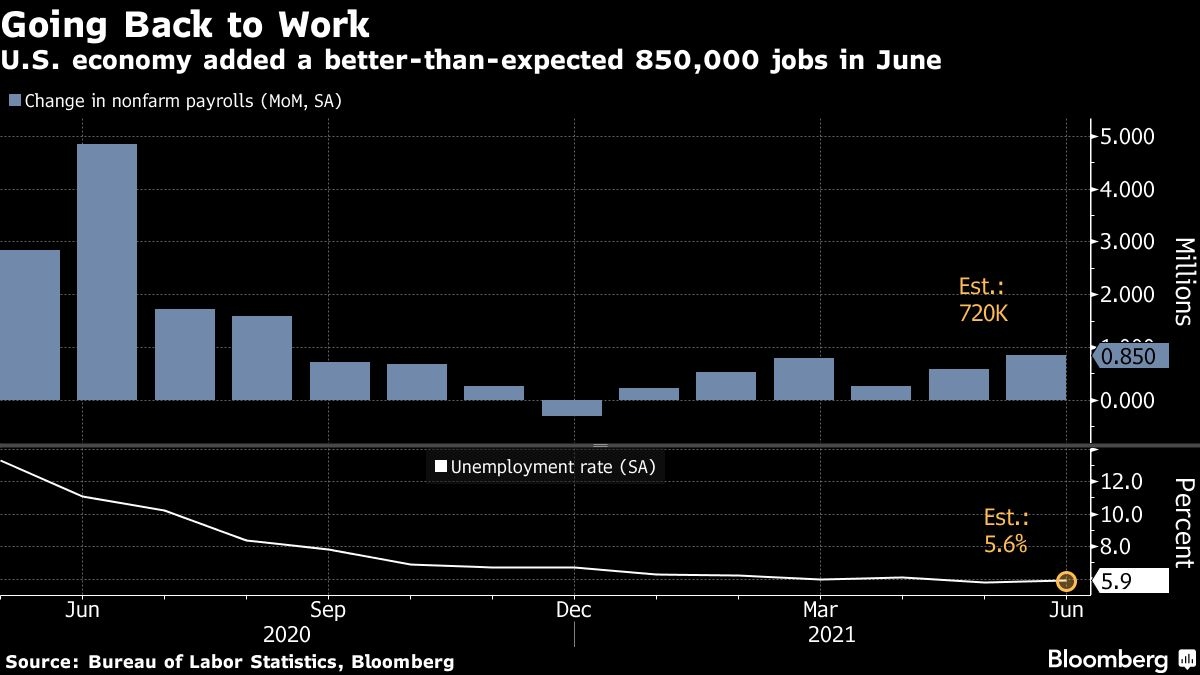 The median estimate in a Bloomberg survey of economists was for a 720,000 rise in June payrolls.

“Things are picking up,” said Nick Bunker, an economist at the job-search company Indeed. “While labor supply may not be as responsive as some employers might like, they are adding jobs at an increasing rate.”

The gain in payrolls, while well above expectations, doesn’t markedly raise pressure on the Federal Reserve to pare monetary policy support for the economy. Even with the latest advance, U.S. payrolls are still 6.76 million below their pre-pandemic level.

Stocks opened higher and Treasury securities fluctuated after the report.

Demand for labor remains robust as employers strive to keep pace with a firming economy, fueled by the lifting of restrictions on business and social activity, mass vaccinations and trillions of dollars in federal relief.

At the same time, a limited supply of labor continues to beleaguer employers, with the number of Americans on payrolls still well below pre-pandemic levels.

Coronavirus concerns, child-care responsibilities and expanded unemployment benefits are all likely contributing to the record number of unfilled positions. Those factors should abate in the coming months though, supporting future hiring.

“For the Federal Reserve, the data should be sufficient to move the dialogue forward on tapering discussions this summer. Substantial further progress should be clearer this fall, with an actual reduction to commence in early 2022, in our view.”

The Labor Department’s figures showed a 343,000 increase in leisure and hospitality payrolls, a sector that’s taking longer to recover because of the pandemic.

Job growth last month was also bolstered by a 188,000 gain in government payrolls. State and local government education employment rose about 230,000, boosted by seasonal adjustments to offset the typical declines seen at the end of the school year.

Hiring was relatively broad-based in June, including other notable gains in business services and retail trade. However, construction payrolls dropped for a third straight month and manufacturing employment rose less than forecast.

“Most of the new jobs now being created are in sectors that were slammed by the pandemic, while companies in other industries are struggling to find available workers,” Sal Guatieri, senior economist at BMO Capital Markets, said in a note.

The overall participation rate held steady and remained well short of pre-pandemic levels. The employment population ratio, or the share of the population that’s currently working, was also unchanged.