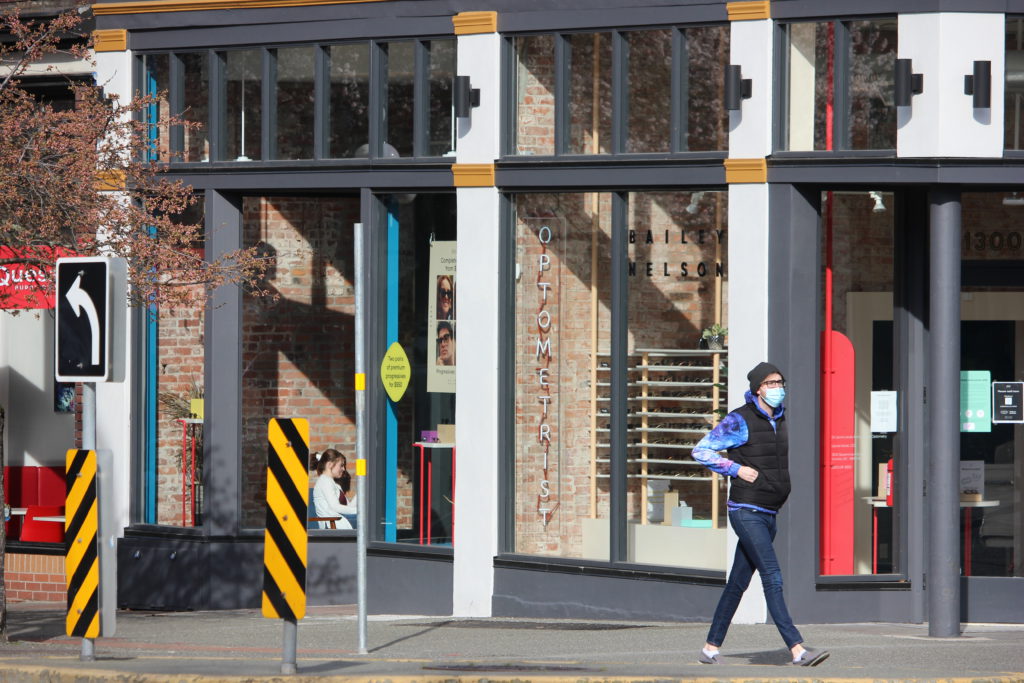 British Columbia health officials have reported 1,462 new cases – including  72 in Island Health – and 11 deaths from COVID-19.

Of the new cases, 407 were recorded in Vancouver Coastal Health, 802 were in Fraser Health,  72 in Island Health,  79 in Interior Health, and 102 in Northern Health.

There are 4,854 currently active cases in the province, 240 people in hospital — 66 of whom are in intensive care — and 8,723 people under active public health monitoring due to possible exposure to an identified case.

During Monday’s update, Dr. Bonnie Henry, the province’s provincial health officer, said there were 144 new cases that are variants of concern identified in the province since the last update on Friday.

A total of 363 cases are associated with the U.K. variant while 31 cases are the B151 variant or South African variant.

B.C. has recorded a total of 394 cases with a variant of concern, with six of those cases being identified in the Island Health region.

“A quarter of these cases, we do not know exactly how they were transmitted, which tells us that the variants are some of the viruses that are being transmitted in our communities,” said Henry on Monday.

There are currently 267 active cases on Vancouver Island, according to the latest information posted on the BCCDC‘s dashboard.

Fourteen people are in hospital, one of whom is in critical care.

A total of 625 tests for COVID-19 were performed in the past 24 hours in the region.

Since the coronavirus pandemic began, there have been 2,587 cases, 143 people hospitalized, 2,281 recoveries and 28 deaths on Vancouver Island.

Meanwhile, Island Health reported 231 active cases on Vancouver Island in its latest dashboard update. Of those active cases, 48 are in the South Island, 130 are in Central Island, and 53 are in the North Island.

Island Health’s data often lags behind the BCCDC’s data due to a “difference in timing of reporting across laboratory and public health data sources.”

‘Modified return’ of certain activities on the horizon

During Monday’s update, Dr. Bonnie Henry, the province’s provincial health officer, offered an optimistic outlook for the weeks ahead, saying that British Columbians can look ahead to a “modified return” of certain activities that are currently prohibited.

“We are not going to rush to get things open, but we will take a thoughtful, careful and phased approach over the next few weeks,” said Henry. “I like to think of it as slowly turning up the dial again, rather than flipping the switch,” said Henry, stressing that British Columbia is not in a place where it can simply return to pre-pandemic life.

Such activities that could resume include in-person faith-based gatherings, small outdoor social gatherings, and children’s camps and sports in certain settings.

“What we are looking at as we head into March break or spring break at the end of this week and into next week, is seeing the return of things like gatherings outside, where it safer, activities outside that we can do in groups with precautions in place,” she said.

“We will be looking at how we can travel and explore during March break as a family or a small group together with our household, exploring our own region and making sure that if we are going to different parts overnight within our region or within the province that we do make sure that we are not going to place that are not yet ready to receive visitors,” said Henry.

It is likely the virus that causes COVID-19 will remain for a while longer, but there is hope on the horizon, according to Henry.

“There is much we can look forward to in the coming months ahead,” she said.

“It is likely we are still going to have to deal with the virus that causes COVID-19, but we will be in a much different place by the time we head to the summer,” – Dr. Bonnie Henry.https://t.co/y1l6qanNr0

Dr. Henry on potentially lifting some restrictions: “In the weeks ahead we can start to look at this modified return of some of the activities that have been on pause…” @CHEK_News

What supply chain shortages look like for two Canadians – CBC.ca

The Food and Drug Administration posted its analysis of Pfizer’s data ahead of a public meeting next week to debate whether the shots are ready for the nation’s roughly 28 million children ages 5 to 11. The agency will ask a panel of outside vaccine experts to vote on that question.

In their analysis, FDA scientists concluded that in almost every scenario the vaccine’s benefit for preventing hospitalizations and death from COVID-19 would outweigh any serious potential side effects in children. But agency reviewers stopped short of calling for Pfizer’s shot to be authorized.

The agency will put that question to its panel of independent advisers next Tuesday and weigh their advice before making its own decision.

If the FDA authorizes the shots, the Centers for Disease Control and Prevention will make additional recommendations on who should receive them the first week of November. Children could begin vaccinations early next month — with the first youngsters in line fully protected by Christmas.

Full-strength Pfizer shots already are recommended for anyone 12 or older, but pediatricians and many parents are anxiously awaiting protection for younger children to stem infections from the extra-contagious delta variant and help keep kids in school.

Pfizer publicly released data from its coronavirus vaccine trial appearing to show that it’s both safe and effective for children aged five to 11. But that data is now being reviewed by regulators, and parents want to carefully weigh the risks. 2:03

The FDA review affirmed results from Pfizer posted earlier in the day showing the two-dose shot was nearly 91 per cent effective at preventing symptomatic infection in young children. Researchers calculated the figure based on 16 COVID-19 cases in youngsters given dummy shots versus three cases among vaccinated children. There were no severe illnesses reported among any of the youngsters, but the vaccinated ones had much milder symptoms than their unvaccinated counterparts.

Most of the study data was collected in the U.S. during August and September, when the delta variant had become the dominant COVID-19 strain.

No new side effects

The FDA review found no new or unexpected side effects, which mostly consisted of sore arms, fever or achiness that teens experience.

However, FDA scientists noted that the study wasn’t large enough to detect extremely rare side effects, including myocarditis, a type of heart inflammation that occasionally occurs after the second dose.

While children run a lower risk of severe illness or death than older people, COVID-19 has killed more than 630 Americans 18 and under, according to the CDC. Nearly 6.2 million children have been infected with the coronavirus, more than 1.1 million in the last six weeks as the delta variant surged, the American Academy of Pediatrics says.

The Biden administration has purchased enough kid-size doses — in special orange-capped vials to distinguish them from adult vaccine — for the nation’s 5- to 11-year-olds. If the vaccine is cleared, millions of doses will be promptly shipped around the country, along with kid-size needles.

More than 25,000 pediatricians and primary care providers already have signed up to get the shots into little arms.

TORONTO — Edward Rogers’ roles as chair of the Toronto Blue Jays and control person with Major League Baseball are unaffected by this week’s manoeuvrings that led to his removal as board chair of parent company Rogers Communications Inc., according to two industry sources.

Whether fallout from the power struggle atop the telecom giant, which also owns Sportsnet, might eventually reach the club is unclear. Last week, Blue Jays president and CEO Mark Shapiro said the team was “about a month away” from presenting its off-season plan during a final payroll meeting with ownership, and expressed confidence that its long-term strategic objectives would remain on track.

“Every indication I’ve received and every indication that we’ve been shown … leads me to believe that we will stay on plan and the payroll will continue to rise despite the fact that we’re still lagging behind a little bit in revenues due to (the pandemic),” Shapiro said.

Those comments came before news broke that John MacDonald, a member of the Rogers Board of Directors since 2012, had assumed the chairman role in place of Edward Rogers, who according to media reports had sought to oust company CEO Joe Natale.

Edward Rogers is now seeking to replace five board members.

At this point, the sources said the developments aren’t expected to impact a winter of opportunity for the Blue Jays, who are seeking to augment a club that missed the post-season by one game and are about to see top performers Marcus Semien, Robbie Ray and Steven Matz hit free agency.

Shapiro is close with Edward Rogers, who as chair is the top officer of the club. He is also the control person, a role each of the 30 MLB teams assigns to represent the interests of that ownership.