Alibaba and its three largest rivals — Tencent Holdings Ltd., food delivery giant Meituan and JD.com Inc. — have shed nearly $200 billion over two sessions since Thursday, when regulators revealed an investigation into alleged monopolistic practices at Ma’s signature company. That marked the formal start of the Communist Party’s crackdown on not just Alibaba but also, potentially, the wider and increasingly influential tech sphere.

“It is very hard to predict the outcome of the Chinese government’s ongoing investigation into Alibaba and other large consumer internet platforms,” Baird analyst Colin Sebastian wrote in a note. He cut his price target on Alibaba’s U.S.-listed shares to $285 from $325, citing “uncertainty around government oversight and potential for direct regulatory action in the coming year.”

On Sunday, China’s central bank ordered Ma’s other online titan — Ant Group Co. — to return to its roots as a payments service and overhaul adjacent businesses from insurance to money management, spurring talk of an eventual breakup.

Once hailed as the standard-bearers of China’s economic and technological ascendancy, Alibaba and its compatriots now face increasing pressure from regulators worried about the speed with which they’re amassing clout in sensitive arenas such as media and education and gaining influence over the daily lives of hundreds of millions. That concern crystallized in November, when regulators torpedoed Ant’s $35 billion initial public offering before unveiling draft rules enshrining sweeping powers to clamp down on anti-competitive practices in sectors from e-commerce to social media.

“The Chinese government is putting more pressure or wants to have more control on the tech firms,” Jackson Wong, asset management director at Amber Hill Capital Ltd., said by phone. “There is still very big selling pressure on firms like Alibaba, Tencent or Meituan. These companies have been growing at a pace deemed by Beijing as too fast and have scales that are too big.” 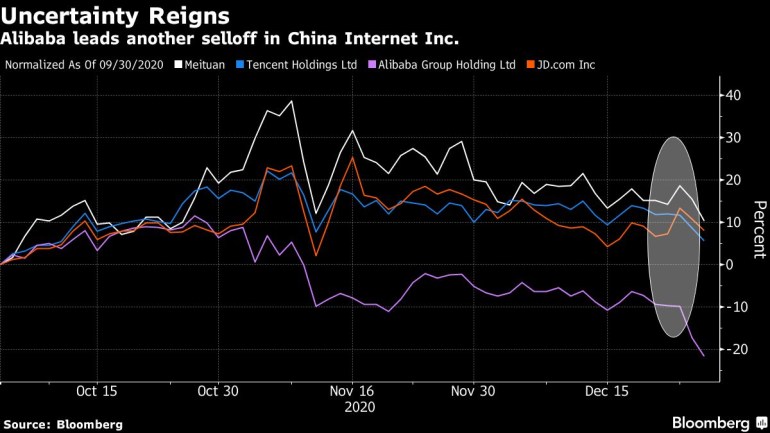 It’s unclear what concessions regulators may try to wring from Alibaba. Under the existing Antitrust Law — now undergoing revisions to include the internet industry for the first time — Beijing can fine violators up to 10% of their revenue. In Alibaba’s case, that could mean a levy of as much as $7.8 billion.

China’s e-commerce leader on Monday raised a proposed stock repurchase program by $4 billion to $10 billion, effective for two years through the end of 2022. But the buyback program was overwhelmed by fears that the steps taken against Ant are just the tip of the iceberg. While the central bank stopped short of calling for a breakup, the financial services giant now needs to present specific measures and a timetable for overhauling its business.

The State Administration for Market Regulation dispatched officials to Alibaba’s Hangzhou headquarters last Thursday and the on-site investigation was completed on the day, according to local news reports. The People’s Daily — the Communist Party mouthpiece — ran a commentary over the weekend warning Alibaba’s peers to take the antitrust investigation into Alibaba as a chance to lift their own awareness of fair competition.

Ma, the flamboyant co-founder of Alibaba and Ant, has all but vanished from public view since Ant’s IPO got derailed last month. As of early December, the man most closely identified with the meteoric rise of China Inc. was advised by the government to stay in the country, a person familiar with the matter has said.

Ma isn’t on the verge of a personal downfall, those familiar with the situation have said. His very public rebuke is instead a warning Beijing has lost patience with the outsize power of its technology moguls, increasingly perceived as a threat to the political and financial stability President Xi Jinping prizes most.

Investors remain divided over the extent to which Beijing will go after Alibaba and its compatriots as Beijing prepares to roll out the new anti-monopoly regulations. The country’s leaders have said little about how harshly they plan to clamp down or why they decided to act now.

Some analysts predict there’s a crackdown coming, but a targeted one. They point to language in the regulations that suggests a heavy focus on online commerce, from forced exclusive arrangements with merchants known as “Pick One of Two” to algorithm-based prices favoring new users. The regulations specifically warn against predatory pricing — selling below cost — to weed out rivals.

“As this latest investigation occurs at a time when China is ready to take action against monopolistic practices, we think SAMR might want to use BABA’s case as a precedent to send a message to the rest of the industry that the authority is determined this time to address the” pricing issue, Nomura analysts wrote in a note Monday. 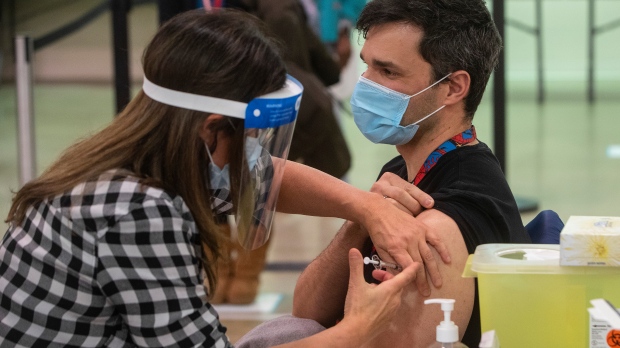 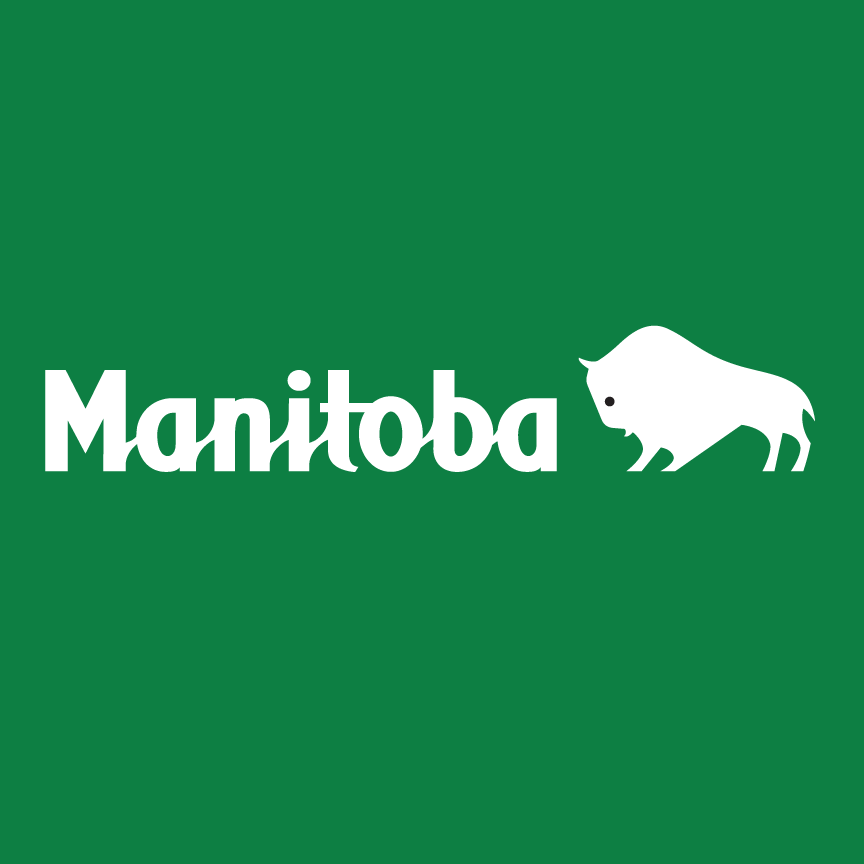 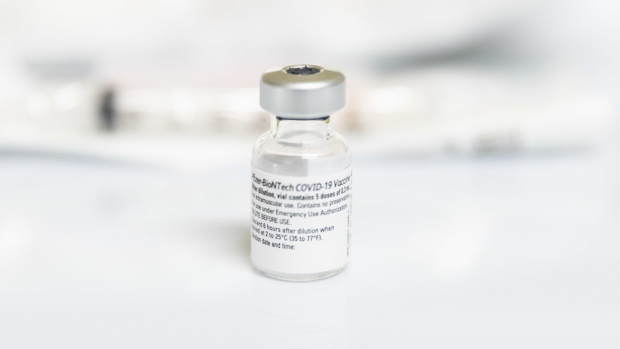 VANCOUVER —
B.C. announced its full COVID-19 vaccine distribution plan through September on Friday, and while it relies on regular shipments of both Pfizer and Moderna vaccines, officials are looking into the safety of mixing doses between the two.

Dr. Bonnie Henry explained during a morning news conference about vaccine rollout that discussions have been ongoing across the country, especially after a recent delay in Pfizer shipments.

The top doctor said Canadian health officials are in contact with their counterparts in the U.K., where some second doses of the vaccine are being delayed by as much as three months.

“We’re trying to understand the impact that has on effectiveness of the vaccine,” she said.

Henry said there has been “some permissive language” around using the same type of vaccine. In other words, she explained, because both Moderna and Pfizer are mRNA vaccines, there’s a better chance they could be interchangeable.

“But that is a last resort. It’s only if the original vaccine is not available,” she said. “We’re still looking at the best advice on that and whether it’s better to delay the second dose for longer or to provide the second dose with the alternate product.”

One example scenario Henry gave is if an individual is at the 42-day mark after receiving their first Pfizer dose but there is no longer any Pfizer vaccine available, health officials are discussing what they would do in that instance.

“We would have to make a decision about whether we use available doses of Moderna or whether we extend and wait for Pfizer to become available. So that’s the situation we’re not yet in, but that we may be facing,” she said.

“Right now we don’t have good information to inform one or the other of those decisions.”

Henry said there is little data on the matter right now, but added there’s been weekly discussions on the topic with the National Advisory Committee on Immunization, with another call planned for this weekend.

Building Earth's largest telescope on the far side of the moon – CBC.ca