A 240 million-year-old fossil has revealed that dolphin-like ichthyosaurs could gobble up animals almost as big as themselves. It’s the first direct evidence of ‘megapredation’ – one large animal eating another – in the ancient world.

Ichthyosaurs were marine reptiles that lived during the time of the dinosaurs. The fossilised ichthyosaur in this new study was uncovered in a quarry in southwestern China. It’s an almost complete skeleton, around five metres long, with the bones of another marine reptile called a thalattosaur preserved inside its stomach.

“Our ichthyosaur’s stomach contents weren’t etched by stomach acid, so it must have died quite soon after ingesting this food item,” said study co-author Dr Ryosuke Motani, a paleobiologist at the University of California, Davis.

The researchers don’t know for sure whether the ichthyosaur killed the animal itself, or whether it was scavenging following another animal’s kill.

But several pieces of evidence suggest that it was a direct kill, including the fact that the nutritious torso and legs were still intact – this probably wouldn’t have been the case if another predator had got there first. 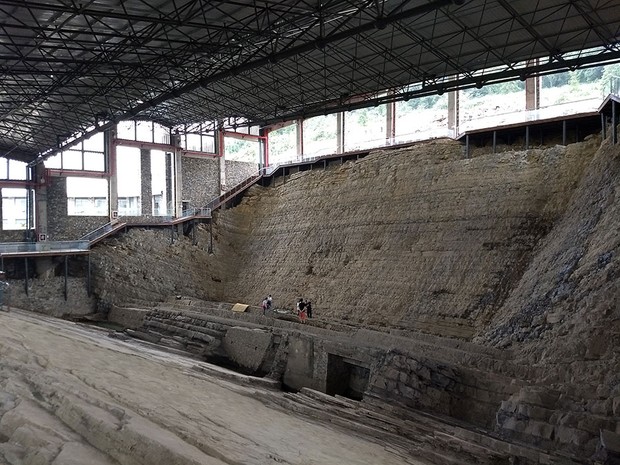 The quarry where the ichthyosaur was uncovered, now part of the Xingyi Geopark Museum © Ryosuke Motani/University of California

The ichthyosaur had relatively small, peg-like teeth, which suggest that, rather than neatly slicing through its victim, it would have gripped it before ripping or tearing it apart. Present-day apex predators such as orcas, leopard seals and crocodiles use a similar technique. 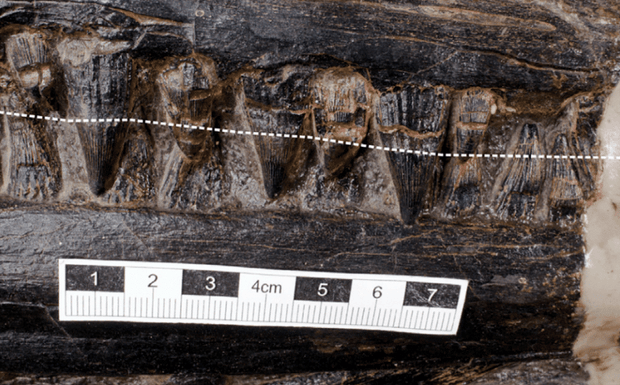 “Now, we can say for sure that [ichthyosaurs] did eat large animals,” said Motani. “This also suggests that megapredation was probably more common than we previously thought.”

Reader Q&A: Why were dinosaurs so big?

Dinosaurs lived during the Triassic, Jurassic and Cretaceous. During these periods, the climate was much warmer, with CO₂ levels over four times higher than today. This produced abundant plant life, and herbivorous dinosaurs may have evolved large bodies partly because there was enough food to support them. But being large also helps to protect against predators.

The giant sauropods had to eat plants as fast as they could, to grow big enough to be safe from carnivores like T. rex and Spinosaurus. Meanwhile, the carnivores were becoming larger just so they could tackle their enormous prey. Another possibility is that the herbivorous dinosaurs were ectothermic (cold blooded), and being huge helped them regulate their temperature. This theory is problematic though because evidence increasingly suggests that the large carnivores were endothermic (warm blooded), which means that dinosaurs would have evolved two different metabolic systems, side by side.

No more nose swabs? Why a saliva test for COVID-19 could be a 'game changer' – CBC.ca

(Newser)
–
Mark Johnson remembers his attacker in vivid detail. “He had green eyes,” he says. “The teeth were pearly white, no stain or anything.” Now, the Florida artist wants to paint the perp—an 8-foot-long alligator that mauled him earlier this month. The attack in Port St. Lucie took place on Sept. 13 while Johnson was taking his dog, Rex, on a morning walk on the shoreline of the canal in his neighborhood. Suddenly, the gator emerged. “He started clamping down really good above my knee, and my shoe was sticking out the base of his jaw,” Johnson, 61, tells Patch.com, adding that there was no makeshift weapon, like a stick or rock, he could use to get the gator off him. Afraid the aggressive reptile might go after Rex, Johnson gave his dog the command to run home, then scrambled to try to break the gator’s grip.

Johnson, who believes he was seconds away from being dragged into the water, finally broke free by jamming his fingers into the gator’s eyes, causing the animal to release him. An injured Johnson hobbled home, and when his wife—who’d been enjoying a cup of coffee outside and saw the creature swimming in the canal—spotted him coming down the road, she yelled out, “Did you see the gator?” Johnson’s reply: “Yeah, he bit me.” He ended up with about five dozen stitches for his puncture wounds on his leg, plus another five on his finger, which he sliced while sticking it in the gator’s eye socket, per WJXT. Now Johnson has a 30-by-40 canvas on order, which he plans on turning into a “self-portrait” documenting his ordeal, per the Guardian. He’s not sure if he’ll keep it as a reminder or sell it. (Read more alligator stories.)

With overfishing driving many hammerhead species closer to the brink of extinction, a team of researchers has been focusing on determining the migration patterns of smooth hammerhead sharks (Sphyrna zygaena) in the western Atlantic Ocean in an effort to identify areas and times for management action to help in building back the depleted species.

The team tagged juvenile hammerheads off the US Mid-Atlantic coast using fin-mounted satellite tags and tracked the animals for up to 15 months. The tags reported the sharks’ movement patterns in near real time via a satellite link to the researchers.

“Getting long-term tracks was instrumental in identifying not only clear seasonal travel patterns, but importantly, also the times and areas where the sharks were resident in between their migrations,” said Ryan Logan, first author of the paper published in Frontiers in Marine Science. Logan is a PhD student at Nova Southeastern University’s Guy Harvey Research Institute and SOSF SRC and the Save Our Seas Foundation Shark Research Center (SOSF SRC).

Logan and his coworkers found that the sharks migrate between two seasonally resident areas: coastal waters off New York in the summer and off North Carolina in the winter. Identifying these habitats is vital for ultimately designating the areas as “Essential Fish Habitat”—with the accompanying limitations on fishing and development.

The high-resolution data also revealed that the hammerheads spent a lot of time in the Mid-Atlantic Shark Area (MASA) in the winter, starting in December. The MASA zone is closed to bottom longline fishing between January 1st and July 31st to protect dusky sharks, so beginning the closure of the zone in December would further reduce the fishing mortality of juvenile smooth hammerheads.

Venus is a Russian planet — say the Russians – CNN Philippines

(CNN)— No longer confined to territories here on Earth, Russia has now staked its claim on Venus, saying it is a “Russian planet.”

This week, Dmitry Rogozin, head of the Russian space corporation Roscosmos, revealed that the country plans to send its own mission to Venus in addition to “Venera-D,” the planned joint mission with the US, the Russian state news agency TASS reported.

Rogozin was addressing reporters at the HeliRussia 2020 exhibition, an international expo of the helicopter industry in Moscow.

“Resuming Venus exploration is on our agenda,” he told reporters Tuesday.

“We think that Venus is a Russian planet, so we shouldn’t lag behind,” he said.

“Projects of Venus missions are included in the united government program of Russia’s space exploration for 2021-2030.”

The statement came the day after scientists revealed that a gas on Earth called phosphine had also been detected in the atmosphere of Venus.

Venus is similar in size to Earth and is our closest planetary neighbor, but it spins backward compared to other planets.

The study authored by Cardiff University professor Jane Greaves and her colleagues was published Monday in the journal Nature Astronomy.

The discovery of phosphine on Venus elevates it to an area of interest worth exploring in our solar system alongside the ranks of Mars and “water world” moons like Enceladus and Europa, Seager said.

“Our hoped-for impact in the planetary science community is to stimulate more research on Venus itself, research on the possibilities of life in Venus’ atmosphere, and even space missions focused to find signs of life or even life itself in the Venusian atmosphere,” Seager said.

According to the European Space Agency, the Russians do have significant experience when it comes to Venus.

Its website states: “Between 1967-1984 Venusian studies carried out in Russia were at the forefront of international research into this planet.

“Since then, Russia has still preserved its unique expertise in designing and developing landing craft for Venus and continues to define scientific tasks for those craft.”

This story was first published on CNN.com, “Venus is a Russian planet — say the Russians.”