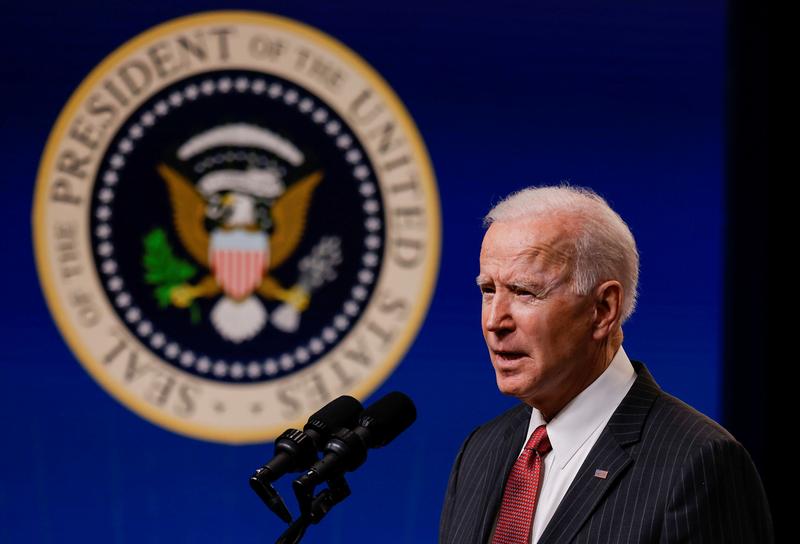 WASHINGTON (Reuters) – President Joe Biden will hold his first event with other leaders from the Group of Seven nations in a virtual meeting on Friday to discuss the coronavirus pandemic, the world economy and dealing with China, the White House said on Sunday.

The meeting is the first by top leaders from the G7 group of rich democracies since April, it said.

“This virtual engagement with leaders of the world’s leading democratic market economies will provide an opportunity for President Biden to discuss plans to defeat the COVID-19 pandemic, and rebuild the global economy,” the White House said in a statement.

The White House said Biden would focus his remarks on a global response to COVID-19 vaccine production and distribution as well as “continued efforts to mobilize and cooperate against the threat of emerging infectious diseases by building country capacity and establishing health security financing.”

Biden, a Democrat who took over from Republican former President Donald Trump on Jan. 20, has sought to project a message of re-engagement with the world and with global institutions after four years of his predecessor’s “America First” mantra.

Trump withdrew the United States from the World Health Organization and the Paris climate accord and largely scoffed at multilateral organizations and groups.

Biden brought the United States back into the WHO and rejoined the Paris accord and has signaled a desire to work with allies in confronting China on a host of thorny issues.

“President Biden will also discuss the need to make investments to strengthen our collective competitiveness and the importance of updating global rules to tackle economic challenges such as those posed by China,” the White House said.

Trump challenged China over its trade policies by imposing punishing tariffs, an instrument he also used on traditional allies, drawing criticism for not taking a more unified approach with U.S. friends to stand up to Beijing on issues such as intellectual property theft and other economic practices.

Domestically, Biden is pressing Congress to pass a $1.9 trillion stimulus package to boost the U.S. economy and provide relief for those suffering from the pandemic.

The White House said he would discuss his economic agenda with G7 counterparts and encourage them and all industrialized countries to maintain “economic support for the recovery” and other collective measures.

Climate change would also be on the agenda.

By Twinnie Siu and Clare Jim

HONG KONG (Reuters) – Hong Kong plans to run a much lower budget deficit in the coming fiscal year as the economy is expected to recover from its longest recession on record, Finance Secretary Paul Chan said on Wednesday.

The Chinese-ruled city’s recovery hopes are now pinned on coronavirus vaccines. Often-violent protests and U.S.-China trade tensions in 2019 had plunged the global financial hub into recession even before the pandemic hit.

The deficits followed a 15-year period of accumulating surpluses.

Kevin Lai, chief economist for Asia ex-Japan at Daiwa Capital Markets, said the budget signalled that Hong Kong was trying to revert to living within its means.

“The overall budget appears generous, but it is tightening in fact,” Lai said. “Overall spending is actually a reduction as compared to last year.”

Pandemic relief measures, including cash handouts to residents and tax breaks and other benefits to businesses, left the city with a much deeper deficit last year than the planned HK$139.1 billion.

“With the epidemic still lingering, our economy is yet to come out of recession,” Chan said in his budget speech. “This year’s budget focuses on stabilising the economy and relieving people’s burden.”

To support a recovery in consumer and business activity, spending in the coming year includes HK$5,000 vouchers to residents, cuts in the profits and salaries tax, and a waiver on business registration fees. The tourism and technology sectors will also receive some support.

On the revenue side, the government will increase the stamp duty for stock trading to 0.13% from 0.1% — a surprise move which has sent the shares of the operator of the Hong Kong Stock Exchange tumbling.

Hong Kong usually runs balanced budgets or surpluses, since its pegged currency system commits it to fiscal prudence. Its fiscal reserves are expected at HK$902.7 billion at the end of March 2021 and fall to HK$775.8 billion by end-March 2026.

Hong Kong has allocated HK$8 billion for “safeguarding national security”, more than 10 times as much as the money earmarked for boosting the barely-breathing tourism sector and almost two times the amount to be injected in the Innovation and Technology Fund in the coming year.

There is no breakdown on where the national security money goes or timeframe for spending it.

The city begins its vaccine rollout this week, having secured a total of 22.5 million doses of COVID-19 vaccines from Pfizer, Sinovac and AstraZeneca, lagging other developed cities.

BENGALURU (Reuters) – India’s economy is likely to have returned to growth in the December quarter due to the easing of restrictions on movement after the first wave of the coronavirus epidemic peaked, a Reuters poll predicted.

The median forecast from a survey of 58 economists, conducted between Feb. 18-24, put year-on-year growth at 0.5% in the December quarter, as the economy stabilised after contracting 23.9% and 7.5% in April-June and July-Sept quarters respectively.

The previous poll, taken a month ago, had predicted a 2.0%contraction.

However, the wide range of forecasts in the latest poll – from a contraction of 4.7% to a 2.6% expansion – underscores the uncertainty.

India has reported the second highest number of coronavirus cases, lagging only behind the United States, but it is widely accepted that infections are far higher than officially recorded.

The economic recovery has been aided by the government’s spending plan and its commitment to not bring its fiscal deficit down to pre-pandemic levels for at least five years, and by the Reserve Bank of India’s pledge to keep monetary policy accommodative.

“Pent-up goods demand supported by elevated financial savings have led to a rise in manufacturing. Alongside this, a strong pick-up in government spending on social welfare schemes and capital expenditure has also helped,” noted economists at HSBC.

The central bank slashed its key repo rate by 115 basis points last year and has since held it steady at 4%.

“We expect liquidity normalisation to be calibrated and incremental during the course of the year. No change is expected in the repo rate this year,” said Radhika Rao, economist at DBS Bank in Singapore.

Minutes of the last RBI monetary policy committee meeting showed optimism for a recovery, but concerns have increased about a second wave of infections and renewed lockdowns in a few areas in the state of Maharashtra, which accounts for about 16% of India’s economic output.

German economy to shrink some 1.5% in early 2021: DIW – TheChronicleHerald.ca

BERLIN (Reuters) – Germany’s economy could shrink by around 1.5% in the beginning of the year, the DIW research institute said on Wednesday, as lockdown measures to restrict coronavirus infections take a toll on Europe’s biggest economy.

DIW said a surge in coronavirus cases was constraining economic growth but that the pandemic’s impact was less severe than in last spring when production facilities came to a standstill.

“Above all, industry has come through the winter robustly so far,” said DIW forecaster Claus Michelsen.

Strong exports and solid construction activity helped the German economy to grow by a better-than-expected 0.3% in the final quarter of last year, but stricter lockdown measures at home and abroad are clouding the outlook for Europe’s largest economy.