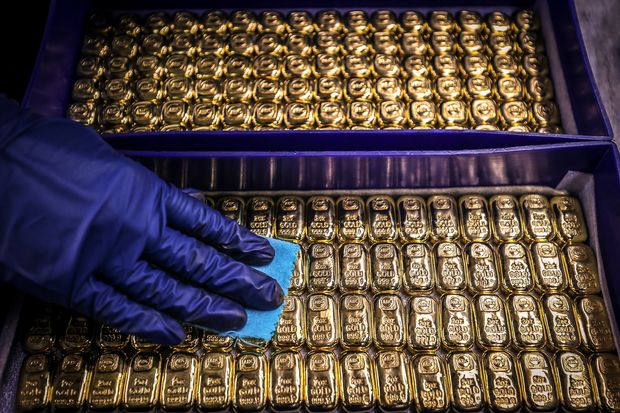 An investment firm owned by a royal family recently made major adjustments in its investment portfolio.

LGT Capital Partners, which is owned by the Princely House of Liechtenstein, bought up gold stocks

(SWI) shares in the fourth quarter. LGT disclosed the trades in a form it filed with the Securities and Exchange Commission.

LGT, which manages $65 billion in assets, didn’t respond to a request for comment on the stock transactions.

Newmont is one of Barron’s top stock picks for 2021. “Gold remains a good hedge against ultraloose monetary policies worldwide and possible higher inflation,” we wrote.

In November, AngloGold halted operations at an Argentina mine for 10 days following the detection of Covid-19 cases among its workers. In December, AngloGold said that strong cash-generation will support a sharply higher dividend payment. Also that month, BMO Capital Markets analyst Raj Ray upgraded AngloGold to Outperform from Market Perform. “[W]e see some potential near-term positive catalysts that could drive share price performance,” Ray wrote in a research report.

Microsoft has benefited by focusing on the cloud, a move that paid off as the coronavirus pandemic pushed office workers to work from home, creating a critical mass of remote workers. Last week, the software giant announced an investment in

The investment firm also sold 90,000 SolarWinds shares to end the year with 430,000 shares of the provider of IT infrastructure management software.

SolarWinds stock crumbled in December after the company disclosed that it was the victim of a cyberattack. Shares ended 2020 with a loss of 19.4%, but they are up 6.6% so far in January.

In January, J.P. Morgan analyst Sterling Auty wrote in a report that SolarWinds stock was “an attractive opportunity” for those tolerant of risk.

Inside Scoop is a regular Barron’s feature covering stock transactions by corporate executives and board members—so-called insiders—as well as large shareholders, politicians, and other prominent figures. Due to their insider status, these investors are required to disclose stock trades with the Securities and Exchange Commission or other regulatory groups.

Square (NYSE: SQ) shares fell after hours as the company’s December-quarter financials beat analyst expectations but gross payment volume was slightly below estimates. The company is one of the fastest-growing fintechs in the world and has witnessed the popularity of its Cash App soar during COVID-19. In general, digital payment tech companies have been some of the biggest winners throughout the health crisis as they have made it easier for people and businesses to send and receive payments safely.

This article was originally written by MyWallSt. Read more market-beating insights from the MyWallSt team here.

Shareholders were disappointed with Square’s gross payment volume (GPV) of $32 billion for the quarter, which was up 12% YoY but still fell short of Wall Street’s prediction of $32.1 billion. Square’s GPV provides investors with an overall picture of transaction volumes and is the main gauge of the total dollar amount being transferred through its payment services. The higher the volume of payments tracked by GPV, the more transaction revenue Square can generate.

Square stated that revenue growth was driven by more people using the Cash App to buy and sell Bitcoin. The mobile payments company benefited hugely from the recent Bitcoin rally, helping Square generate $1.76 billion in profit. Excluding Bitcoin, Square’s total net revenue increased to $1.4 billion, meaning the company was heavily reliant on cryptocurrency transactions on its platform during the quarter.

During the earnings call, Square also disclosed that it had invested a further $170 million into Bitcoin in addition to its earlier $50 million purchase. This investment could provide the company with further income down the line, yet the worry for investors here is that financial regulators might begin to crack down on Bitcoin.

Square is growing its user base

Square shares have surged over 16% year-to-date as investors largely ignored the threat of small businesses closing during the pandemic and how this could affect the company. Instead, shareholders focused on the growth of the company’s Cash App and how the service could help people make payments safely during the pandemic. At the end of 2020, its Cash App had 36 million users, up from 30 million at the end of Q3.

Square’s revenue growth is benefiting from the shift to e-commerce and growing popularity for its digital cryptocurrency transaction services offered by its Cash App. Whether investors need to be worried about Square’s reliance on Bitcoin is still a concern for many. However, Bitcoin continues to receive legitimacy in the eyes of the financial world as more companies like Tesla invest in it. This might just be a play that could work in the company’s favor but is still one that investors are watching closely.

MyWallSt gives you access to over 100 market-beating stock picks and the research to back them up. Our analyst team posts daily insights, subscriber-only podcasts, and the headlines that move the market. Start your free trial now!

Disclaimer Past performance is not a reliable indicator of future results.

CMC Markets is an execution-only service provider. The material (whether or not it states any opinions) is for general information purposes only, and does not take into account your personal circumstances or objectives. Nothing in this material is (or should be considered to be) financial, investment or other advice on which reliance should be placed. No opinion given in the material constitutes a recommendation by CMC Markets or the author that any particular investment, security, transaction or investment strategy is suitable for any specific person.

The material has not been prepared in accordance with legal requirements designed to promote the independence of investment research. Although we are not specifically prevented from dealing before providing this material, we do not seek to take advantage of the material prior to its dissemination.

CMC Markets does not endorse or offer opinion on the trading strategies used by the author. Their trading strategies do not guarantee any return and CMC Markets shall not be held responsible for any loss that you may incur, either directly or indirectly, arising from any investment based on any information contained herein.

*Tax treatment depends on individual circumstances and can change or may differ in a jurisdiction other than the UK.

Success! You have successfully signed up.

On national TV Sat. Feb 27 & Sun. Feb 28, 2021 – From mining to cryptocurrency this episode of BTV-Business Television visits exciting companies for your investment portfolio including:

Moneta Porcupine Mines Inc. (TSX: ME) – Their recent acquisition increased their land position to create one of the largest undeveloped gold projects in North America.

To view the source version of this press release, please visit https://www.newsfilecorp.com/release/75445

News Provided by Newsfile via QuoteMedia

The funding round was also backed by family office K3 Ventures, the Economic Development Board of Singapore’s New Ventures unit and NX-Food, a startup hub owned by Germany’s Metro AG. The investors will help fund a regional expansion as Next Gen prepares to start selling to Singapore restaurants from March 18.

The deal is a sign that Temasek, which manages S$306 billion ($232 billion) and also backs plant-based beef rival Impossible Foods, is ramping up deals in the alternative protein space as Singapore attempts to secure 30% of its food locally by 2030. While the firm’s subsidiaries like Vertex Venture Holdings have previously invested in seed funding rounds, the parent company has traditionally backed more mature businesses at the Series A level and beyond.

Next Gen was co-founded by Timo Recker, whose family has long worked in pork production. He wanted to move away from meats and in 2013 used his industrial know-how and some family capital to launch LikeMeat, which sells currywursts, schnitzels and other products made of soy and peas.

Recker sold control of that business last year and launched Next Gen in Singapore. It uses suppliers in the Netherlands to produce soy-based chicken pieces with “lipi,” a trademarked mix of plant-based ingredients it says imparts a chicken-like taste in the same way heme boosts the realism of Impossible Foods’ fake-beef burgers. The product will be sold under the brand name Tindle.

But where Impossible Foods’ heme features genetically engineered soy – forcing it to gain regulatory approval before entering some markets – Next Gen uses natural ingredients. For K3 Ventures Chief Executive Officer Meng Xiong Kuok, that was an important factor in making the investment.

“Building up their capabilities based on non-GMO soybeans helps guarantee and set the foundations for their potential entry into the China market,” he said.

Singapore is positioning itself as a global hub for alternative protein development and production. It recently became the first country to approve the sale of cell-based chicken via Eat Just Inc. and is home to Shiok Meats – a producer of lab-grown prawn meat.

The backing of institutional investors won’t guarantee success, with startups and conglomerates around the world working on plant-based meat products. The segment is expected by UBS Group AG to be worth more than $51 billion by 2025, or about 2.5% of the overall meat market.

Next Gen outsources the manufacturing of its products and will initially sell through restaurants instead of direct to consumers. To prevent partners from replicating their recipe, contractors produce different components before it’s assembled into the final product. Its Netherlands-based partner can produce 5,000 tons annually, enough for 9,000 restaurants, and Recker predicts this capacity will be enough to last two to three years.

“We’re building now our teams and will then scale the brand globally,” he said. “We want to become the undisputed leader for plant-based chicken.”