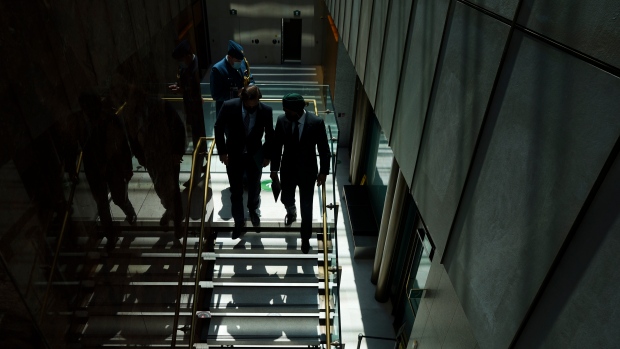 Canadians working to evacuate allies from Afghanistan described chaos, fear and disappointment on Sunday as Canada shut down its embassy in Kabul and suspended diplomatic relations amid a Taliban advance in the capital.

The federal government said the situation in Afghanistan poses “serious challenges” to its ability to ensure safety and security at the embassy.

“After consulting with Canada’s Ambassador to Afghanistan, the decision was made to temporarily suspend our diplomatic operations in Kabul,” the federal ministers of foreign affairs, immigration and defence said in a joint statement.

The ministers said safety of Canadian personnel is a top priority, adding that staff are “safely on their way back to Canada.”

“The Canadian embassy will resume its operations as soon as the security situation in Afghanistan allows us to guarantee appropriate service and adequate security for our staff,” they said.

The Taliban have seized nearly all of Afghanistan in just over a week and breached the capital on Sunday.

Officials told the Associated Press that President Ashraf Ghani had flown out of the country earlier in the day, as personnel were evacuated from the U.S. Embassy and other western missions and staff destroyed sensitive documents. Commercial flights out of Kabul’s international airport were reportedly suspended amid the rush of people trying to leave.

Dave Morrow, a retired corporal with the Canadian-Afghan Interpreters group, said he and other volunteers were receiving panicked messages from Afghans who feared they had been left to fend for themselves.

“The level of panic on the ground is indescribable,” Morrow said by phone from Montreal. “It’s a very dark time for everybody involved.”

Prime Minister Justin Trudeau condemned the violence in Afghanistan on Sunday, adding Canada remains committed to the Afghan people and the country.

“We are heartbroken at the situation the Afghan people find themselves in today,” Trudeau said from Ottawa moments before formally launching a federal election campaign.

“This is especially so given the sacrifices of Canadians who believed and continue to believe in the future of Afghanistan. We will continue to work with allies and the international community to ensure that those efforts were not in vain.”

Canada has committed to taking in 20,000 refugees from the country who have already fled.

It also has said it is working to evacuate Afghans who have assisted Canada over the years.

On Sunday, the government said it was working with allies such as the United States to keep that immigration program for interpreters going, though Trudeau said that mission would depend on the “extremely fast evolving” conditions on the ground.

“We will continue to work to get as many Afghan interpreters and their families out as quickly as possible as long as the security situation holds,” he said.

Morrow described the situation in Afghanistan as a worst-case scenario, but a predictable one that his group and others had been calling on Ottawa to mitigate for months.

He argued that the Canadian government had failed in its response and said his group had begun exploring other alternatives to help contacts on the ground, with diminishing hope for success.

“How do you tell somebody that, I’m sorry, but we’re probably not going to be able to get you out,” he said

“A lot of us veterans are having that conversation right now with interpreters that believed in us and it’s heartbreaking. There’s going to have to be a reckoning very soon about what this means as a country to just let this happen.”

Others criticized the government for triggering an election instead of focusing on allies who need immediate help.

Jack Harris, deputy defence critic for the federal New Democrats, said in a tweet that he was concerned to hear reports of 100 Nepalese workers at Canada’s embassy who were not included in the evacuation effort.

“Canada must take measures to ensure their safety,” Harris said. “Instead of focusing on evacuating those at risk in Afghanistan, today Justin Trudeau is calling an election.”

Andrew Rusk of advocacy group Not Left Behind also criticized the timing of the election call and the closure of the embassy, a move he said meant “effectively halting the government’s extraction efforts” for stranded workers who supported Canada.

“As our government pursues a majority, they’ve turned their back on both Afghanistan and our Veteran community,” he said in a statement.

In an interview, Rusk said his group is hearing reports of violence targeting Afghans who worked with Canada, including some recent killings, and of “pandemonium” in Kabul as people scramble for options to get out.

He said the Canadian government was too slow to act on calls to rescue people, leaving it to volunteers to field their desperate please for help.

“This isn’t something that a bunch of veterans and other Canadians should be taking the leadership role on. It has happened because there is a gap in leadership within the federal government,” he said.

This report by The Canadian Press was first published Aug. 15, 2021.

– With files from The Associated Press.

How is Police Brutality Being Handled in Canada

The recent death of Chantel Moore in New Brunswick has sparked a national conversation about the issue of police brutality in Canada. While this is an unfortunate tragedy, it is not an isolated incident but a symptom of a much larger problem.

To address this important issue, we must first understand the systemic racism and colonial violence that underlies police brutality in Canada.

The Roots of Police Brutality in Canada

Police brutality in Canada is rooted in colonialism and racism. Since its inception, the Canadian government has used oppressive tactics to control Indigenous populations and deny them their basic rights and freedoms.

For decades, Indigenous people have been subjected to discrimination at the hands of law enforcement officials who often view them as less than human. This institutionalized racism has enabled police officers to act with impunity when dealing with Indigenous and Black individuals, leading to numerous cases of excessive force and even death.

The Impact on Communities

The impact of police brutality extends far beyond individual victims; it affects entire communities by creating an atmosphere of fear and distrust toward law enforcement officials. This can lead to further marginalization as people become increasingly reluctant to report crimes or seek help from authorities for fear of being treated unfairly or worse.

Additionally, when individuals are subjected to unjust treatment by law enforcement officials, it can have long-term psychological effects that manifest themselves in depression, anxiety, and other mental health issues. It is clear that police brutality remains a serious problem in Canada that needs to be addressed urgently.

Structural Racism and Multiple Systems of Failure in Canada

Canada is often seen as a beacon of hope for many immigrants, refugees, and people of colour. However, the reality in Canada is far from the truth. Structural racism exists in almost every aspect of life in Canada, from housing discrimination to the criminal justice system.

What Is Structural Racism?

Structural racism is a form of discrimination that results from systems or policies that are implemented to maintain certain racial disparities. These policies may be institutional, such as zoning laws that prevent people of colour from living in certain areas or educational programs that limit access to higher education for certain groups.

It can also manifest itself through unconscious biases held by individuals within decision-making roles or positions of power. Regardless of how it manifests itself, it has real implications for those who are most impacted by it.

The most visible example of structural racism is the criminal justice system, where people of colour are disproportionately locked up and incarcerated compared to white people. This is due to systemic biases within policing practices and sentencing laws that target certain communities.

Other systems impacted include housing, education, employment, and healthcare; all these have biases in place that prevent many people from accessing services they need or deserve due to their race or ethnicity.

These biases are perpetuated by both conscious and unconscious decisions made by those within positions of power.

The Consequences of Structural Racism

The consequences of structural racism can be seen on an individual level they lead to increased poverty, lack of access to resources and services, lower educational attainment rates, and increased psychological distress among those affected by them.

On a societal level, they lead to increased levels of inequality among different races and ethnicities as well as decreased economic mobility for those who are unable to access opportunities due to their race or ethnicity.

Additionally, there is an overall negative impact on social cohesion as different communities become further divided along racial lines due to unequal treatment under the law or through other forms of discrimination.

In the latest real estate scam, homes are being sold behind owners’ backs. Here’s how. – Maclean’s