In a surprise move, Canada has told Boeing Co that its contender for a multi-billion dollar fighter jet contract does not meet the required standard, a defense source said on Thursday.

This means only Lockheed Martin Corp and Sweden’s Saab AB are left in the race to supply 88 jets. Ottawa says it intends to make a decision next year on a contract that could be worth up to C$19 billion ($15 billion).

Boeing had entered its F-18 Super Hornet. The Canadian Press was the first the report the news.

Defense analysts had been certain Ottawa would exclude Saab’s Gripen plane. Unlike Canada, Sweden is neither a member of NATO or NORAD, the North American defense organization.

Canada belongs to the consortium that developed Lockheed Martin’s F-35 jet, which defense sources say is the preferred choice of the air force.

The competition is being overseen by the office of Procurement Minister Filomena Tassi, which did not respond to a request for comment.

Lockheed Martin declined to comment. No one at Saab was available for comment. Boeing spokesman Paul Lewis said by email that the company would reserve comment pending official notification from Ottawa.

Boeing clashed with Canada in 2017 after it complained Ottawa was unfairly subsidizing a passenger jet made by Montreal-based rival Bombardier.

Canada responded by saying it would look less favorably on a fighter jet bid from a company that had harmed national interests, but nonetheless allowed Boeing to take part.

The Liberals took power in 2015 vowing not to buy the F-35 on the grounds that it was too costly, but have since softened their line.

Canada has been trying unsuccessfully for more than a decade to replace its aging F-18 fighters. The former Conservative administration said in 2010 that it would buy 65 F-35 jets but later scrapped the decision, triggering years of delays and reviews. 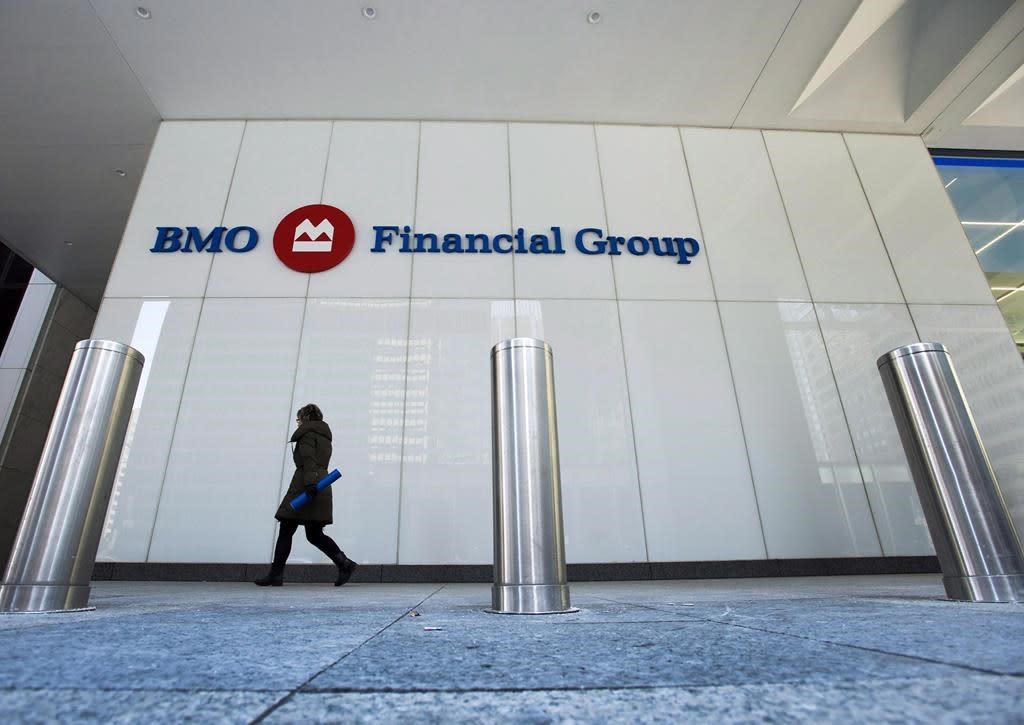 TORONTO — BMO Financial Group wrapped the week of Big Six financial results by announcing the biggest dividend raise and share buyback plan of all the banks as it reported earnings that were boosted in part by efficiency gains.

The bank said Friday that it had raised its quarterly dividend 25 per cent to $1.33 per share and said it would buy back up to 22.5 million shares representing 3.5 per cent of shares outstanding.

The payout commitment came as the bank reported a fourth-quarter profit of nearly $2.2 billion, up from almost $1.6 billion in the same quarter last year, and said it had made efficiency gains that should also result in expenses being largely flat next year despite inflationary pressures.

He said the bank has been on a cost-reduction push for years that has helped improve its efficiency ratio, a key measure of how well banks translate assets into profits, by 540 basis points since 2018 to 56.5 per cent.

The bank has also held expenses flat for the last two years, excluding higher performance-based compensation this year, as it has scaled back on some business areas. Going forward, White said there are plans to more efficiently use real estate and improve back-office functions.

“We just continue to challenge ourselves. We think there’s more to do, and we don’t think we’re at the bottom of the barrel.”

Companies are also responding quickly to tackle inflationary pressures and the supply chain issues causing them, noted David Casper, U.S. chief executive of BMO, with many building up automation and bringing more factories and equipment back onshore.

White said that he’s optimistic that the various tools being used by companies and governments, including diverting more ships through the Panama Canal and ramping up activity in East Coast ports, could resolve much of the backlog next year.

“We’re starting to see a little bit of easing. I don’t think we’re going to be having this conversation in a year from now.”

BMO says its profit amounted to $3.23 per share for the quarter ended Oct. 31, up from $2.37 per diluted share in the same quarter last year.

Analysts on average had expected an adjusted profit of $3.21 per share, according to estimates compiled by financial markets data firm Refinitiv.

Revenues increased 9.8 per cent to $6.6 billion from nearly $6 billion a year ago.

Lower-than-expected expenses were a key reason for the earnings beat, along with lower provisions for credit losses, said National Bank analyst Gabriel Dechaine in a note.

In its fourth quarter, BMO posted a $126-million reversal of its provisions for credit losses compared with the $432 million it set aside for bad loans in the same quarter last year.

Barclays analyst John Aiken said in a note that there could be some concern that cost cutting could hit future growth, but that since BMO is coming off a stretch of high expenses there should be more run room.

He said that increased payouts from BMO, with more expected to come, is a clear plus for the bank.

“Since we believe that the return of capital theme was the most important one in the quarter, we can quite confidently state that BMO was the winner.”

All six of Canada’s big banks have raised their dividends and announced plans to buy back large numbers of their shares this week as they reported their fourth-quarter results.

The increased payments to shareholders follow a decision by the federal banking regulator last month to lift restrictions on dividend increases, share buybacks and executive compensation that were put in place at the start of the pandemic.

Companies in this story: (TSX:BMO)

OPG will deploy the SMR at its site in Darlington where it has a license to build a new nuclear power site that it expects to complete around 2028, the company said in a press release.

SMRs can be made in factories and transported to power plants for installation, making them cheaper than larger conventional reactors. Demand for SMRs is expected to grow as nations around the world look for ways to cut carbon emissions.

SMRs have capacity of up to 300MW(e) per unit, around a third of conventional reactors, according to the International Atomic Energy Agency.

Canada gets around 15% of its power from nuclear from 19 reactors, mostly in Ontario, producing 13.5 GWe, according to the World Nuclear Association.

Canada’s economy added 154,000 new jobs last month, surging past expectations and enough to move the jobless rate down to just six per cent.

Statistics Canada reported Friday that the jobless rate fell by 0.7 percentage points, to six per cent. That’s the lowest jobless rate since the pandemic began. Prior to COVID-19, in February 2020, Canada had a jobless rate of 5.7 per cent. It topped out at 13.7 per cent in May of that year, before sliding steadily lower.

The data agency calculates that more than 19.3 million people in Canada had a job last month. That’s 183,000 more than had one pre-pandemic.

There was good news on the wage front, too, as the data agency calculates that wages during November 2021 were 7.7 per cent higher than they were the same month two years ago, before the pandemic. That’s an extra $2.18 an hour, on average, since the same period two years ago.

Workers on the whole are moving up the wage scale. The number of people making less than $12 an hour has fallen dramatically over the past two years, from more than a quarter of a million people before to just 165,000 people today. There are also fewer people making between $12 and $20 an hour, as that number has fallen from 5.1 million workers to just 4.4 million now.

Those salary bands are shrinking because people are moving up the pay scale. Those making between $20 and $30 an hour have grown from 4.9 million before to 5.2 million now, and the ranks of those in the highest band have swollen to more than 6.8 million people. That’s more than a million more than there were before.

While higher wages are good for workers, they come with a double-edged sword that the cost of living is going up quickly, too. Those bigger paycheques are tempered by the fact that Statistics Canada data shows prices have increased by 5.3 per cent compared to what they were two years ago.

Tanya Gullison, chief revenue officer with human resources consulting firm LHH, said people are heading back to the workforce in droves because they need the money to pay for the higher cost of everything.

“Inflationary pressure [is] bringing workers back into the labour force in search of increased income,” she said. “Employees are also navigating this with wage increases, mirroring those south of the border.”

It’s paying off to change jobs, too, in the aggregate. Statistics Canada says average wage gains are increasing at a faster rate for new hires than they are for existing workers.

“Over the next fiscal year, bonuses and other perks are also likely to trickle over as a means of drawing new talent and retaining existing staff,” Gullison said.

In the depths of the pandemic, policy makers had warned about a growing cohort of “long-term unemployed” people, which Statistics Canada defines as people who lost a job and didn’t find a new one for at least 27 weeks, which is just over half a year.

There were about 185,000 Canadians in that category before the pandemic, about 15 per cent of everyone without a job.

That number skyrocketed to 510,000 people by April of this year, or almost a third of those who were jobless.

The figure has inched steadily lower since then, but had its biggest drop since the pandemic started in November, plunging by 62,000 people to 305,000 people.

“Finally, these workers are seeing the light at the end of the COVID tunnel,” said economist Tu Nguyen with consulting firm RSM Canada. “With job vacancies surpassing one million, the labour shortage will intensify, pushing wages upward as businesses compete to attract and retain talent.”

US Real Estate Enters A Bubble For The First Time Since 2007: US Federal Reserve – Better Dwelling