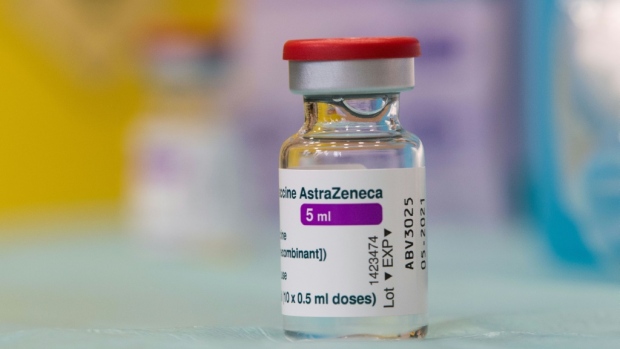 Canadian provinces suspended use of the Oxford-AstraZeneca COVID-19 vaccine in people under age 55 on Tuesday, acting on an advisory committee’s concerns about a possible link between the shot and rare blood clots.

Dr. Shelley Deeks, the vice-chair of Canada’s National Advisory Committee on Immunization, said the committee updated its recommendations amid new data from Europe that suggests the risk of blood clots is now potentially as high as one in 100,000 — much higher than the one in one million risk believed before.

Health Canada demanded Monday that AstraZeneca do a detailed study on the risks and benefits of its COVID-19 vaccine across multiple age groups, and Deeks said the advisory committee recommended the shot be suspended for younger groups pending the outcome of that review.

“NACI has determined that there is substantial uncertainty about the benefit of providing AstraZeneca COVID-19 vaccine to adults under 55 years of age, given the potential risks associated with it,” Deeks said.

“As a precautionary measure, while Health Canada carries out an updated benefit-risk analysis based on emerging data, NACI recommends that the vaccine not be used in adults under the age of 55 years.”

She said most of the patients in Europe who developed a rare blood clot after vaccination with AstraZeneca were women under the age of 55, and the fatality rate among those who develop clots is as high as 40 per cent.

The blood clot condition is known as Vaccine-Induced Prothrombotic Immune Thrombocytopenia. Deeks said it is treatable, and the fatality rate could go down now that it has been identified and symptoms are communicated.

Health Canada said it has not received any reports of blood clots in Canada, and the department’s chief medical adviser, Dr. Supriya Sharma, said Monday she believes the vaccine’s benefits outweigh the risks.

The department changed its label on the vaccine last week to warn about the rare risk of blood clots. Sharma said Health Canada hasn’t changed its decision to authorize AstraZeneca.

The company said in a statement that its vaccine is safe and effective and has been approved by European regulators and Health Canada.

“The extensive body of data from two large clinical data sets and real-world evidence demonstrate its effectiveness, reaffirming the role the vaccine can play during this public health crisis,” the statement read.

Provincial governments decide on their own how to use a vaccine, but Dr. Howard Njoo, Canada’s deputy chief medical officer of health, said all provinces and territories had agreed to suspend the use of the vaccine for those under 55, pending the results of further study.

Several provinces had announced earlier in the day that they planned to limit the use of the vaccine, including Quebec, Manitoba, Newfoundland and Labrador and Prince Edward Island.

Quebec’s Health Department said it was pausing the use of the vaccine for those under 55 as a precautionary measure, saying it is impossible to rule out the possibility of a link to blood clots.

“The (European Medicines Agency) still considers this product to be safe and effective, but the possibility of a link between the vaccine and clotting issues … cannot be completely ruled out at this time,” the province said in a statement.

Manitoba decided to limit the use of the AstraZeneca vaccine to people between the ages of 55 and 64 as more information is sought around some adverse symptoms in younger people noticed in the United Kingdom, according to the medical lead of the province’s vaccine task force.

“This is a pause while we wait for more information,” Dr. Joss Reimer said Monday.

Prince Edward Island and Newfoundland and Labrador also said they were suspending use of the shot for younger age groups while awaiting new data.

Dr. Heather Morrison, PEI’s chief medical officer of health, said the risk of developing a serious problem after being immunized is “very, very low.” She said people who received the AstraZeneca vaccine should look for symptoms such as shortness of breath, chest pain, leg swelling, persistent abdominal pain, sudden onset of severe or persistent headache or blurred vision and skin bruising elsewhere than the site of vaccination, developing four to 20 days after vaccination.

The development is the latest setback for AstraZeneca, which has previously been dogged with questions over its preliminary trial data in the United States and confusion over whether it is safe for seniors.

The AstraZeneca vaccine was approved in Canada for all people over 18 on Feb. 26, but NACI then said there weren’t enough seniors included in clinical trials to be confident about how the vaccine would perform on people over the age of 65.

Two weeks later, NACI retracted that advice, citing new real-world evidence from the United Kingdom that showed the vaccine was very effective when used on seniors.

Canada received 500,000 doses of AstraZeneca, made at the Serum Institute of India, but it’s not clear how many have been administered to date. Many provinces prioritized their use for people aged 60 to 64, but some focused on younger groups.

This report by The Canadian Press was first published March 29, 2021.