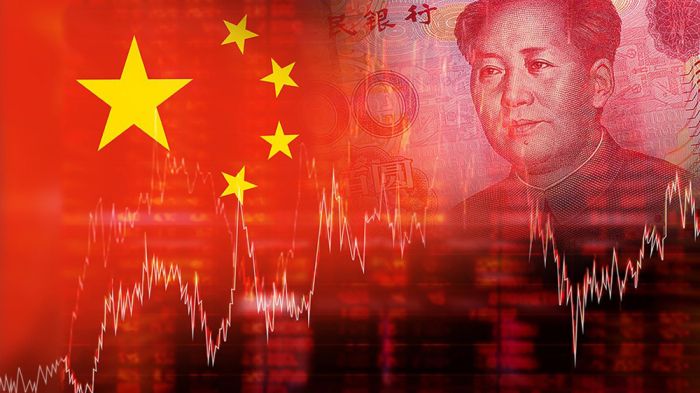 The U.S. Federal Reserve, on Sunday (Monday morning in Asia) announced a full percentage point cut in its benchmark interest rate, reducing it to close to zero. The Fed also promised to inject liquidity into the economic system by buying at least $500 billion of Treasury securities and at least $200 billion of mortgage-backed securities. The Hong Kong Monetary Authority followed the U.S. central bank’s example and cut its own base rates.

But financial markets were unimpressed. Australia’s ASX index crashed by more than 9% on Monday to 5,002. New Zealand’s NZX 50 index fell 3.6%. Hong Kong’s Hang Seng Index, already a bear market since Friday, was down 2.2% at the lunchtime trading break. South Korea’s KOSPI index headed for a loss of more than 1%, though Japan’s Nikkei index rose 0.7%, apparently in anticipation of stimulus measures.

Mainland Chinese markets were firmly down, with the SSE Shanghai Composite benchmark down more than 2%.

Chinese data unveiled on Monday showed that industrial production in the world’s manufacturing hub fell by 13.3% in January and February. That has never happened before in the modern era.

Other data showed Chinese retail sales down by 20.5% in the same two months, and fixed asset investment down by 24.5%.

The UK economy is forecast to fall an incredible amount in the current pandemic-afflicted quarter ending in June.

The forecast comes from an average projection of more than a dozen top economists contacted by the BBC.

While the same economists predict a similarly large positive rebound after that, this year, annual UK GDP is still anticipated to fall significantly.

While there is no precedent for shutdowns of large swathes of the economy, 14 of the top economists from the City and business have calculated how much economic activity is being lost.

The estimates range from JP Morgan’s calculation that about UK GDP in the April-June quarter will come in at -7.5% – a sharp contraction – to Capital Economics’ forecast of -24% – suggesting nearly a quarter of entire economic activity will be lost.

Half the forecasts seen by the BBC are between -13% and -15%. Quarterly figures normally move by fractions of a percent.

For reference, just a few weeks ago, before the pandemic hit the UK, the average forecast for this quarter was a fall of just 0.2%. The official Budget forecast a month ago, before the Coronavirus effects, pencilled in growth of 0.4%.

The BBC understands that analyses circulating in the Treasury are in line with the larger end of such declines. But the Office of Budget Responsibility (OBR) has not yet been asked to update projections from the time of the Budget a month ago.

One OBR member, Sir Charles Bean, has referred to it being “not implausible” that for as long as the lockdowns are in force, economic activity will be reduced “by somewhere between a quarter and a third”, and that a three-month lockdown “would knock something like 6-8 percentage points off annual GDP”.

Last week, the OECD group of leading economies said that the immediate hit to the UK economy would be worth 26% of the economy. But it did not put a timeframe on that.

The Bank of England is currently preparing new forecasts for its Monetary Policy Report, to be published early next month. Last month, Bank governor Andrew Bailey said he could not put a precise number on the likely GDP fall, as it depends on how Covid-19 evolves. But “every picture we look on at has a very sharp V on it”, he said.

Such movements have no precedent within a single quarter. The closest comparison would be the sharp fall in the economy during the Great Depression in the 1920s, although that occurred over three economic quarters. A prolonged fall such as seen a century ago is not what forecasters are predicting right now.

These sorts of numbers are anticipated across the developed world, as most nations pursue forms of shutdown to control the spread of the virus and protect health systems from being overwhelmed.

The forecast declines illustrate the difficult balancing act for the government in deciding when and how to lift lockdowns, now not expected until May at the earliest.

They also illustrate the fundamental economic policy challenge that the Treasury and Bank of England are trying to manage – to try to help ensure that there is a sharp rebound from these huge hits, avoiding prolonged damage to the economy.

New numbers released by the federal agency on Thursday reflect the early impacts of the economic toll of COVID-19 on the province as well as the country as a whole, which lost over a million jobs during the same period.

The numbers reflect labour market conditions during the week of March 15 to 21, by which time travel restrictions and public health measures directing Canadians to limit public interactions had already been put in place. However, public health measures and restrictions on non-essential businesses have intensified since then, meaning job numbers are likely going to look even worse when Statistics Canada releases its April numbers.

“We knew it was coming, but it’s still shocking to see the initial effects of the effort to contain the spread of COVID-19 on employment,” said ATB Financial on Thursday.

Dialing physical distancing measures up and down could be a way of sustaining the long-term fight against COVID-19 while not crushing the economy, a new study from Ontario researchers suggests.

Their base modelling found 56 per cent of the province’s population would become infected with the novel coronavirus over the next two years.

At the peak of the crisis, 107,000 Ontarians would be hospitalized with 55,000 people in the ICU, the modelling numbers suggested, should nothing be done. The province currently has about 2,000 intensive care beds.

However, the research suggested so-called “dynamic” physical distancing could help keep the health-care system from becoming overwhelmed while allowing “periodic psychological and economic respite for populations.”


Physical distancing is an effective tool to curb the spread of the disease, Canada’s public health agencies have said.

“Instead of a sharp up-and-down epidemic curve, we have something that is stretched out and kind of goes up and down, up and down, and we basically modulate our responses based on where we are in that curve,” said Tuite, an assistant professor of epidemiology from U of T.

“When things start ramping up again, then we know that we need to enhance our social or physical distancing measures. And when things are on the downturn, then we can potentially return a little bit more to normal life.”

The paper was submitted in late March to the Canadian Medical Association Journal and published as a pre-print that has not yet been peer-reviewed.

Amy Greer, one of the study’s author’s, said this is another method to buy society time until a vaccine is available, which is likely more than a year away.

“In the absence of access to a safe and effective COVID-19 vaccine, we will need to work hard to slow down community transmission while also recognizing that we can’t reasonably maintain long-term and aggressive physical distancing until a vaccine becomes available,” said Greer.

Ben Bolker, a math and biology professor at McMaster University who was not involved in the research, called it a “sensible study.”

“The really hard part is figuring out how it’s all going to work at a government, logistic and bureaucratic level,” he said.

He said one potential method would be to change the laws around how many people can gather at once.

Both Tuite and Bolker said other tools will be arriving soon that could help. For one, they said, exhaustive testing would allow the province to drill down into hotspots and ensure isolation measures are placed on those people.

That also might allow some people to return to work.

“It sucks that we have to keep the economy shut for a bunch longer,” Bolker said. “But during that time we’re gathering information and figuring out how the hell we’re going to get out of this.”


Atif Kubursi, a retired professor of economics at McMaster University, said the study is a good starting point for how to fight the disease over the next year or two.

“This is one of the most important questions right now: how can you balance the risk of increased morbidity and death versus destroying the economy?” he said.

Kubursi points out that the study does not get into economic modelling and the effect of starting and stopping businesses – something he’d like to see future research take on.

“It sounds a little simplistic,” he said. “I don’t know if it’s easy to turn the economy on and off, but I guess there are some measures you can take to make businesses essential again.”

“We’d need to know the answer to the question: Is it worthwhile? Can we get people back to jobs in big numbers for short periods of time?” Kubursi said.

“If we can, maybe that is a way to keep the economy greased, keep it moving. It could be worthwhile.”