China’s factory activity expanded at the fastest pace in more than three years in November, while growth in the services sector also hit a multi-year high, as the country’s economic recovery from the coronavirus pandemic stepped up.

Upbeat data released on Monday suggest the world’s second-largest economy is on track to become the first to completely shake off the drag from widespread industry shutdowns, with recent production data showing manufacturing now at pre-pandemic levels.

But companies are still not expanding their payrolls, the figures show, and some analysts point to rising debt levels among state-owned firms as another possible headwind for the economy.

China’s official manufacturing Purchasing Manager’s Index (PMI) rose to 52.1 in November from 51.4 in October, data from the National Bureau of Statistics showed. It was the highest PMI reading since September 2017 and remained above the 50-point mark that separates growth from contraction on a monthly basis. It was also higher than the 51.5 median forecast in a Reuters poll of analysts.

“The latest official PMI surveys show that the pace of economic growth picked up in November on the back of a broad-based improvement in both services and manufacturing,” Julian Evans-Pritchard, senior China economist at research firm Capital Economics, said in a note sent to Al Jazeera.

The robust headline PMI points to solid fourth-quarter growth, which analysts at Nomura expect to quicken to 5.7 percent compared with the same period last year, from 4.9 percent in the third quarter, an impressive turnaround from the deep contraction earlier this year.

The economy is expected to expand by about 2 percent for the full year, the weakest in more than 30 years but still much stronger than other major economies that are struggling to bring their coronavirus outbreaks under control.

The official PMI, which largely focuses on big and state-owned firms, showed the sub-index for new export orders stood at 51.5 in November, improving from 51.0 a month earlier. That bodes well for the export sector, which has benefitted from strong foreign demand for medical supplies and electronics products.

But a surging yuan and further lockdowns in many of its key trading partners could pressure Chinese exports, which have been surprisingly resilient so far.

More companies have reported the impact from currency fluctuations, compared with a month ago, said Zhao Qinghe, senior statistician at the NBS.

“Some firms have flagged that as the yuan continues to rise, corporate profits are under pressure and export orders are declining,” said Zhao.

He added that the recovery across the manufacturing industry remained uneven. For example, the PMI for the textile industry has stayed below the 50-point threshold, pointing to weak business activity.

In the services sector, activity expanded for the ninth straight month. The official non-manufacturing Purchasing Managers’ Index rose to 56.4, the fastest since June 2012 and up from 56.2 in October, as consumer confidence gathered pace amid few COVID-19 infections.

Railway and air transportation, telecommunication and satellite transmission services and the financial industry were among the best-performing sectors in November.

A sub-index for construction activity stood at 60.5 in November, improving from 59.8 in October, as China steps up infrastructure spending to revive its economy.

Monday’s data also showed that the labour market is still facing strains. Services firms reduced payrolls at a faster clip in November, while factories slashed staff for the seventh straight month, although at a slower pace.

Another factor that could prove problematic for China is rising levels of debt among regional governments and state-owned enterprises (SOEs).

“They have been allowed to raise more funds from the bond market and run bigger fiscal deficits when the pandemic began to hit the local economy. Hence, when domestic demand indicators turn better, it is usually a result of more debt-driven stimulus being injected into various industrial sectors.”

Alberta Health said the ministry would not be able to provide an update on the topic before Monday.

On Friday, Health Minister Tyler Shandro said he was “disappointed” in the delay, saying it meant the current phase of vaccinations in Alberta, which includes priority groups of health-care workers, would take longer to complete.

The start of the following phase, allowing seniors over 75 and Indigenous seniors over 65 to get the jab, will be consequently pushed back.

As well, Shandro said the province will be forced to delay some second doses of vaccination due to the news.

Pfizer shipments to Canada are expected to continue, but will contain fewer doses. There is no change to scheduled shipments of the Moderna vaccine.

Through end-of-day Friday, 81,561 Albertans have received their first dose of COVID-19 vaccine, an increase of 7,451 from the previous day. Among all provinces, Alberta ranks second for immunizations per capita, behind only Prince Edward Island.

The province is slated to administer at least 16,000 more jabs over the weekend, after Alberta Health Services said all previously advertised appointments had been booked.

Also Saturday, Alberta reported it had detected another 717 cases of the novel coronavirus.

The new infections came from 12,439 tests, a 5.8 per cent positivity rate, consistent with rates over the previous two days and below the seven-day average positivity rate of 6.2 per cent.

Here is a summary of today’s #COVID19AB update. There are 717 new cases with 12,713 active cases across Alberta. I’m sad to report an additional 15 deaths. My heartfelt condolences to those mourning a loved one. (1/3) 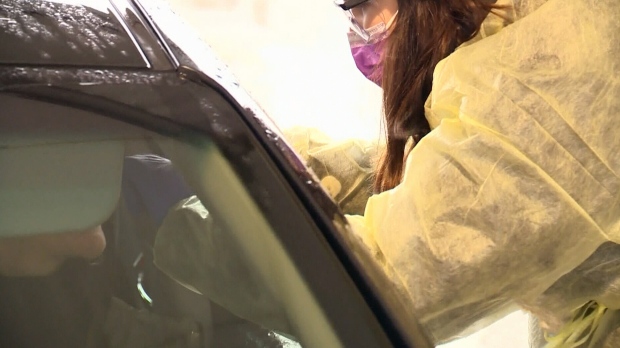 VICTORIA —
Despite a flattering curve, modelling shows British Columbians need to reduce their interactions to avoid a surge in COVID-19 cases.

According to Canadas’s Chief Medical Health Officer, Dr. Theresa Tam, there is worrisome news from new modelling data that shows the pandemic’s growth is escalating rapidly in Canada, and Canadians need to restrict their social interactions or the problem will get worse.

“Unless public health measure are intensified, we will not be able to suppress the current rate of epidemic growth,” said Tam at a press conference on Friday.

While B.C. is faring better than other provinces, including Ontario and Quebec, Dr. Brian Conway of the Vancouver Infectious Disease Centre says we are far from immune to the trend of growing cases.

Conway says the modelling indicates British Columbians need to reduce our interactions to avoid a surge in cases.

“The model suggests that if we continue to act as we have in the previous few weeks that the cases, the number of cases, will continue to increase,” said Conway Friday after looking at the numbers.

Although Dix indicated tighter restrictions didn’t appear likely anytime soon in B.C., he said what matters most is that folks stay vigilant.

“The virus isn’t interested in your orders or our speeches or anything else,” said Dix Friday in Victoria. “What’s more important is our actions.”

Adding to the uncertainty of the coming months, the modelling numbers do not take into account the more transmissible variants of the coronavirus recently discovered in the U.K. and South Africa and now present in Canada, including B.C., but only in very small numbers so far.

On Thursday, B.C.’s provincial health officer Dr. Bonnie Henry said it will be important to contain the cases of variants and identify them early.

“So it may be that we’re in a very similar place to where we were in February of last year, where if we can find them and catch them early we can prevent that variant from spreading,” she said.

Separate modelling to reflect the potential impacts of the variants will be done in the coming weeks.

Pfizer-BioNtech will be resuming shipments of its coronavirus vaccine to the European Union within the next two weeks, but there have been no more changes to Canada’s deliveries.

The pharmaceutical giant announced Friday it would be temporarily reducing the number of vaccines shipped in order to upgrade one of its facilities in Europe.

“We will be back to the original schedule of deliveries to the European Union beginning the week of January 25,” Pfizer said in an online statement late Friday. Arianna Podesta, a spokesperson for the European Commission, confirmed the revised schedule in an emailed statement to Global News.

As of Saturday, Procurement Minister Anita Anand said there were no updates to Pfizer’s announcement, which saw vaccine shipments to Canada will be cut in half for the next four weeks.

She added the federal government was in touch with Pfizer representatives to “reiterate firmly the importance for Canada to return to our regular delivery schedule as soon as possible.”

“This is an evolving situation,” Anand said.

In response to multiple requests for clarification, Pfizer said “the principal of equity is used when considering allocation of doses worldwide and we expect to have more information in the coming days.”

The move has left many provinces scrambling to adjust their vaccine rollout plans. Some, like Alberta and British Columbia, have publicly expressed concerns over how the delays will affect their vaccine schedules. Manitoba has paused new vaccine appointments until the country is back on schedule.

In Ontario, health officials have extended the amount of time between administering the second dose of the vaccine up to 42 days after receiving the first, while Quebec will allow up to 90 days in between doses.

Anand noted that the delay in shipments will not affect Canada’s long-term goals of having enough doses to vaccinate everyone wants the vaccine by the end of September, saying that “this is a temporary reduction. It’s not a stoppage.”

“We are going to see continued vaccines coming in from Pfizer and of course Moderna over the next weeks, but there will be a reduction in doses, and that is the purpose of my being here,” she said Friday.

“It’s going to be temporary, it’s not a loss, and we will make up those doses.”

So far, Canada has received about 380,000 doses of Pfizer’s vaccine. Anand added that the additional 20 million doses Canada secured this week are still on track to arrive by Q2.

The news highlighted the importance of adhering to public health guidelines as reiterated by Canada’s top health officials calling for “further intensified” measures while presenting an updated COVID-19 federal modelling on Friday.

If Canada does not find a way to slow the spread of the virus, Chief Public Health Officer Theresa Tam said the country could be facing 10,000 cases per day by the end of the month. The total number of cases could also increase by almost 100,000 by Jan. 24, and lead to upwards of 2,000 deaths, the federal modelling showed.

Over a short period of time, vaccinations will do little to curb the virus’ transmission. However, Tam said “if we ease measures too soon, the epidemic will resurge even more strongly.”