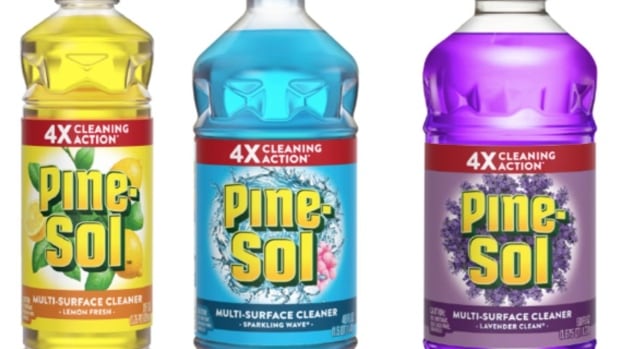 California-based Clorox said Tuesday it has recalled some of its Pine-Sol scented multi-surface cleaners and all-purpose cleaners because they may contain bacteria that could cause serious illness in people with compromised immune systems.

The recall doesn’t include its iconic original pine-scented Pine-Sol, which is its only product registered as a disinfectant.

The company confirmed in an email to CBC News Tuesday evening that the recall applies to Canada, too, and includes Pine-Sol Scented Multi-surface Cleaner in Lavender Clean, Lemon Fresh, and Mandarin Sunrise scents.

“Original Pine-Sol Pine scent and Pine-Sol Multi-surface Cleaner in Spring Blossom and Rainforest Dew, which are sold in Canada, are not included in this recall and are safe to use,” it said.

Consumers can find a full list of affected products and date codes on the company’s website, and a hotline (1-855-378-4982) will be available as of Wednesday for Canadian consumers who purchased the recalled products to submit a request for reimbursement.

The company says the recalled products “may contain bacteria, including Pseudomonas aeruginosa, an environmental organism found widely in soil and water.”

“The bacteria can enter the body if inhaled, through the eyes, or through a break in the skin. People with healthy immune systems are usually not affected by the bacteria,” it said.

The affected product was sold from January 2021 to September 2022.

Photo: The Canadian Press
An autonomous robot delivering a pizza from Pizza Hut is shown in Vancouver.

When customers in downtown Vancouver placed orders with Pizza Hut in September, many of the pies landed on their doorsteps without a courier in sight.

Instead, diners were met by Angie, Hugo or Raja — autonomous robots resembling a cooler on four wheels with eyelike lights. They travelled by sidewalk to customers, who used unique codes to open their lids and reveal their food.

The value proposition for Serve Robotics — a spinoff of Uber’s 2020 food delivery acquisition Postmates that created the trio and a fleet of zero-emission robots — is simple: with slim restaurant margins, a labour crunch and climate change worries ‘”why move a two-pound burrito in a two-ton car?”

A handful of other robotic delivery companies have the same ethos, but their paths to ubiquity are facing several roadblocks.

Delivery robots have been banned from some major cities like Toronto, which argued they are a hazard for people with low mobility or vision, as well as seniors and children. Cyclists already gripe about e-scooters in bike lanes and don’t want robots there either.

“They’re drawing a lot of attention from pedestrians while they’re out on the sidewalk because they’re not seeing them that often and people are excited to see them, but as usage continues to increase, this can cause a lot of congestion on already narrow sidewalks,” said Prabhjot Gill, a McKinsey & Co. associate partner focused on retail.

There’s also worries autonomous robots or ones manned by staff overseas will take jobs away from couriers.

Ali Kashani, Serve’s Vancouver-bred chief executive, considers the criticism to be a natural part of innovation that even the bicycle experienced, when it was invented and many thought it would cause divorce.

He’s tried to quiet concerns by ensuring his robots (Kashani won’t say how many there are) chime and flash their lights to alert people they are around. They are equipped with automatic crash prevention, vehicle collision avoidance and emergency braking.

Ultimately, he thinks they are “a win-win for everybody” because they reduce traffic, boost local commerce and help merchants get food to consumers in a less expensive way.

The environment benefits too because Serve replaces delivery vehicles. Kashani estimates roughly half the deliveries made in the country cover less than 2.5 miles and 90 per cent are completed by car. About two per cent of global greenhouse gas emissions worldwide are attributable to people using personal cars for local shopping and errands.

“There’s a lot of reasons to replace our cars with these robots as quickly as we really can, but there’s no reason for us to make anyone an enemy,” Kashani said.

Knowing how much opposition new ideas can face, Serve is careful to engage with governments and authorities before launching in a city, even if it has no legislation allowing or banning robots.

However, David Lepofsky, chair of the Accessibility for Ontarians with Disabilities Act Alliance, said there’s no way for such robots and humans to coexist because they will always present a tripping hazard and worse, they could be used to transport contraband or explosives.

He insists the fight he and others have waged to keep robots off sidewalks is not an attack on innovation.

“It’s not like we’re denying people a service,” he said. “We’ve got a way to deliver pizzas that we’ve had since we’ve had pizza delivery. It’s called human beings.”

Manish Dhankher, Pizza Hut Canada’s chief customer officer, agrees no pizza delivery is worth risking somebody’s safety, but said his company only partnered with Serve once the robots had made thousands of injury-free trips.

Serve robots only made nearby deliveries for Pizza Hut’s 1725 Robson St. location for two weeks, but the pilot generated “childlike excitement” from customers and had a 95 per cent satisfaction rate.

Dhankher stresses the goal was modernizing pizza deliveries, not cost reduction. Couriers made the same number of deliveries they did before the robots were in use.

But Pizza Hut isn’t ready to roll out robots permanently.

Another question: what happens when cities won’t welcome the robots?

Tiny Mile, a company behind a series of pink, heart-eyed robots named Geoffrey, knows the answer.

Years after Geoffrey started making Toronto deliveries for delivery services like Foodora, Lepofsky and others argued people may be impeded by stopped or stalled devices or unable to quickly detect their presence.

Toronto’s city council voted last December to prohibit the devices that run on anything but muscle power from sidewalks, bike paths and pedestrian ways until the province implements a pilot project for such devices.

Geoffrey was then spotted in Ottawa before the city confirmed such robots aren’t permitted there either and Tiny Mile decamped from Canada completely.

“It was basically a miracle we survived.”

“It was love at first sight,” Tartavull said. “We spoke with cities and they were basically competing for us to go there.”

He believes that adoration will spread as the cost of robot deliveries — now roughly $1 — sink to 10 cents in the next seven years.

“It’s likely going to take a few years before we have it in the big cities but in the long term, it’s kind of undoubtable because the technology is here, it works and we can deliver on time and at a much lower cost,” he said.

As for Serve, it’s focused on Los Angeles right now, but Kashani said its mission is to get five per cent of delivery vehicles off the road in the next five years.

“But I definitely hope that if you fast forward one or two decades, these robots would be doing more local transportation of goods… so that we can not rely on cars.”

Apple is pushing to expedite a pivot away from manufacturing in China, as protests swell over the country’s strict zero-Covid policies and riots thwart production.

The technology giant is ramping up efforts to shift production to other Asian countries like India and Vietnam in order to distance itself from Foxconn, one of the company’s top suppliers and operator of the world’s largest iPhone factory in China, according to the Wall Street Journal.

While the move has been planned for months, after shifting COVID-19 policies enacted by the Chinese Communist Party first began to threaten production earlier this year, sources told the Journal that recent uprisings at the Zhengzhou plant are propelling Apple into action.

In November, the area known as “iPhone City” erupted into violent protests among employees over withheld pay and strict zero-Covid policies that prompted a lockdown in Zhengzhou. As demonstrations grew, Foxconn, which employs upwards of 300,000 factory workers, offered workers $1,400 to quit their jobs, and later, $1,800 bonuses to stay to retain its hemorrhaging workforce.

The protests, which coincided with the start of the holiday shopping season in the US, have led to significant supply chain issues and shortages of Apple iPhone products. The company is expected to have a shortfall of 6 million iPhone Pros alone as a result of the demonstrations, according to Bloomberg.

The turmoil’s impact on Apple’s bottom line has led to a sense of urgency to diversify production away from China, which has long dominated manufacturing for the company. However, the economic slump and slowed hiring is proving challenging to outsource production and forge partnerships with new suppliers, the Journal reported.

“Finding all the pieces to build at the scale Apple needs is not easy,” Kate Whitehead, a former Apple operations manager and owner of a supply-chain consulting firm, told the WSJ.

According to the Journal, Apple plans to source up to 45% of iPhone production from factories in India, where it currently manufactures in just the single digits, and to ramp up manufacturing of products like computers, watches, and AirPods in Vietnam.

“This last month in China has been the straw that broke the camel’s back for Apple in China with the head-scratching zero-Covid policy untenable with major strategic changes ahead for Cupertino in this key region,” Ives Wedbush Securities analyst Daniel Ives wrote in a note to clients.