In a written statement, Henry and Dix urged people across the province to curb social interactions as much as possible, as required under B.C.’s temporary public health order.

“We need to slow the spread of COVID-19 in our province and that needs to happen now,” the health officials said. “Let’s remember that every case of COVID-19 is a person who requires support and care, who may become severely ill and need to be in hospital, and whose family will experience the stress, emotional burden and for some, the tragedy, that has come with this virus.”

There have now been 28,348 cases of the novel coronavirus identified in B.C. since the start of the pandemic, and 19,605 people have recovered.

The latest infections pushed the province’s active caseload to a record 7,732, while hospitalizations reached a new high of 284. That includes 61 patients struggling in intensive care or critical care.

The previous record for daily cases was 767, set on Nov. 18. Prior to November, the province had never topped 400 cases in 24 hours.

Another 10,283 people are under active public health monitoring after being exposed to a known case of COVID-19.

New outbreaks in the health-care system have been declared on a daily basis in B.C., as the province’s rapidly surging caseload continues spilling over into environments where elderly people face some of the greatest risks of severe complications and death from the disease.

As of Monday, there were 60 active outbreaks in long-term care homes, assisted living facilities and acute care units across the province – and 970 of B.C.’s active cases involved care home staff and residents.

“B.C.’s health-care workers are in our labs and hospitals, at our testing sites and in our communities. These people are our health-care system. They are there to support all of us without question and without pause, and we need to show that same support to them by all of us doing our part,” Henry and Dix said.

“That is also why everyone, young and old, needs to pause their social interactions and increase their layers of protection and stay within their local communities as much as possible.”

Under B.C.’s temporary restrictions, which will remain in place until at least Dec. 7, residents are asked to limit in-person social interactions to what’s known as their “core bubble.” For anyone in a shared living situation, such as families and roommates, that means only seeing people from your own household.

Those who live alone are allowed to choose a “core bubble” consisting of a maximum of two people, such as partners, close friends or family members.

Events of any size are to be cancelled or delayed, though officials said people can still hold small weddings, funerals or time-sensitive ceremonies such as baptisms, though there are strict rules including that no more than 10 people attend. 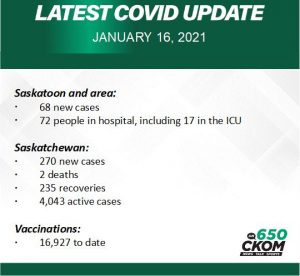 The 2,857 vaccine doses were delivered in the following areas: Saskatoon (893), Prince Albert (857), northeast (426), southeast (285), Regina (267) and the far northwest (129). The far north-central region also administered 53 vaccines on Thursday. Friday’s information wasn’t available in the provincial update. There have now been 16,927 vaccines delivered across Saskatchewan.

An update on incoming vaccines from manufacturer Pfizer was also provided in the media release.

“Due to work to expand its European manufacturing facility, production of the Pfizer vaccine will be impacted for a few weeks,” the release stated.

“Pfizer is temporarily reducing deliveries, potentially by half, to all countries receiving vaccine manufactured at this facility.”

The province reaffirmed that vaccines will continue to be administered according to its priority sequence.

A shipment of 4,900 vaccines arrive from manufacturer Moderna on Friday. Distribution is happening in the central and southeast zones. Poor conditions on Friday delayed the shipment arriving in the far northeast zone until Saturday. Clinics are expected to begin Saturday and continue on Sunday.

Both people who tested positive for COVID-19 and died were from the Regina area. One was reported in the 60-69 age group and one was in the 80-plus age category.

There are 199 people in hospital.

Thirty-five people are in intensive care. Patients are located in Saskatoon (17), Regina (nine), north-central (five), northwest (two), central-east (one) and south-central (one).