Much of England is already under the toughest level of restriction set out in a four-tier system of regional regulations designed to stop the spread of the virus and protect the national healthcare system.

India’s approval of homegrown vaccine criticized over lack of data

The revelation that at least five Alberta MLAs travelled abroad over the holidays amid strict COVID-19 restrictions has left some doctors in the province feeling frustrated.

The news was upsetting for Dr. Fiona Mattatall, an obstetrician-gynecologist at Calgary’s Rockyview General Hospital.

“It made me really angry and frustrated, and as I sorted through where that’s coming from, I realized it’s essentially coming from what I see my patients going through,” Mattatall said, estimating she sees about 50 patients each week.

“They’ve been changing a lot in their lives to keep themselves and their unborn child safe, and (I’ve been) hearing the sacrifices that people are making for their families and for their neighbours. I think it’s been hard coming to terms with knowing as Albertans we’re being given restrictions and then the people who are giving them out are not abiding by them.”

The holidays have been difficult for many Calgarians, as public-health orders meant to curb the COVID-19 pandemic restrict gatherings outside one’s household.

But for those with family members living in continuing-care facilities devastated by outbreaks of the novel coronavirus, the Christmas season has been a nightmare.

Among the most severe active outbreaks in long-term care are at facilities operated by AgeCare, a Calgary-based company with 10 locations in Alberta.

The Alberta government has reversed its plans to expand coal mining in the Rocky Mountains.

Public opposition to the move has grown significantly in the last number of days, with tens of thousands of people signing petitions, writing letters and joining online groups.

“We have listened carefully to the concerns raised in recent days, and thank those who spoke up with passion,” she said.

“As a result, we will pause future coal lease sales in former Category 2 lands. The coal leases from the December 2020 auction will be cancelled.”

2:01
Impact of Alberta rolling back open-pit coal mine restrictions

Impact of Alberta rolling back open-pit coal mine restrictions – Aug 19, 2020

“I want to be absolutely clear: Under the current terms, just as it was under the 1976 coal policy, coal leases do not allow for exploration, development or production without a comprehensive regulatory review. A lease holder has no more right to set foot on lease property than any other Albertan. The same rules apply now, as before.”

“This pause will provide our government with the opportunity to ensure that the interests of Albertans, as owners of mineral resources, are protected.

“Coal development remains an important part of the Western Canadian economy, especially in rural communities, but we are committed to demonstrating that it will only be developed responsibly under Alberta’s modern regulatory standards and processes.

“This decision has no impact on existing coal projects currently under regulatory review.”

More than 100,000 signatures had been collected by Monday on two petitions opposing the United Conservative government’s move on two related fronts.

A Facebook site called Protect Alberta’s Rockies and Headwaters has more than doubled its membership over the last week to more than 10,000.

“The scope of this thing — it’s huge,” Lund said in an interview.

“I’m from the foothills and it threatens the hell out of our water. And the mountains. It’s a big one.”

The NDP said the decision is a “small victory” but that eight leases that were already sold remain in effect.

“Today’s backpedaling from the UCP on their removal of protections for Category 2 public lands is a small victory for the thousands upon thousands of Albertans who have spoken up against this UCP government’s reckless decision to rip up Peter Lougheed’s coal policy,” NDP Environment Critic Marlin Schmidt said in a statement.

“While the UCP government has agreed to cancel the 11 most recently issued coal leases, there are another eight leases they sold last May that remain in effect.

“Further, they still have not committed to reinstating the coal policy and to consulting before making further changes. Without these commitments, these precious wild spaces are still under threat.”

“While this is a step in the right direction, this ‘pause’ will have little effect on the ability of existing leases to be explored and developed for coal in the region,” said Katie Morrison, conservation director with CPAWS Southern Alberta.

“There are more than 840,000 hectares of coal leases and rights in the Eastern Slopes (of the Rocky Mountains). This area includes around 420,000 hectares within lands formerly protected as Category 2 (an area approximately the size of Kananaskis Country) that are now, and still with today’s announcement, open for development as open-pit coal mines. These areas continue to be open and at risk from coal exploration and mine development.”

The group says the 11 leases covered in the province’s announcement are small and only cover about 1,800 hectares — or 0.002 per cent of the area that’s already been leased.

“Whether or not the coal leases were existing or new, open-pit coal mines are now allowed in Alberta’s headwaters where they previously were not,” Morrison explained.

CPAWS is urging the government to fully reinstate the province’s previous coal policy, hold public consultations on the issue and permanently prohibit new coal proposals, exploration and open-pit mines in these areas. VANCOUVER (NEWS 1130) — B.C. is still on track to vaccinate the most vulnerable people despite a reduction in deliveries from Pfizer, the provincial health officer says.

Dr. Bonnie Henry explained the supply issue will have the biggest impact over the next week after which deliveries of vaccines will start to pick up again.

She said this will slow down getting the shots to some hospitals, but the province will continue on schedule for giving the first dose to those most at-risk.

“We have, however, been able to rearrange and look at the process that we have to make sure that we are continuing with providing the first of two doses to those at highest risk, and that we are able to start second doses at day 35, in accordance to our plans that we announced a few weeks ago,” she said during Monday’s briefing.

She said the province expects to receive extra doses at the end of February and into early March, when it will look at expanding its program.

Until then, the plan is still to give people their second dose before focusing on getting others their first dose.

She stressed that while immunizations are underway, the risk remains high across the province as transmission continues.

Since Friday, 31 people lost their lives to the virus, with the deaths in every health authority. The total since the start of the pandemic climbed to 1,078.

Of the 31 deaths over the weekend, @adriandix says 7 were saturday, 19 Sunday and 5 since yesterday.
Health authority break down
7 VCH
14 FH
4 int
2 island
4 North
Island, Int and North with a number of deaths in past month relative to their total.#bcpoli @news1130 #COVID19

=
Another 1,330 infections were reported over the weekend.

There was also a jump in cases in non-resident Canadians, which Henry explained is mostly farmworkers coming for the season. Henry noted there are quarantine accommodations.

“The biggest risk and the biggest variants we have right now is all of us, our human behaviour, the choices that we make every day,” she said.

Henry added the investigation is ongoing after someone tested for the South African variant in B.C. without knowing how they contracted it.

Health Minister Adrian Dix noted it has been almost a year since the first COVID-19 joint release from the province, noting it hasn’t been easy.

“We’ve seen through the course of the pandemic a lot of worry, a lot of fear, a lot of loss, a lot of uncertainty. While COVID-19 gives each of us every reason to experience those feelings, each and every day, I also saw from that day something else, something reassuring – resolve, spirit, strength compassion, and well fear and uncertainty. I think are part of every day in a pandemic. What has kept us going to seeing how British Columbians in every part of our province refuse to let fear and uncertainty rule,” he said. 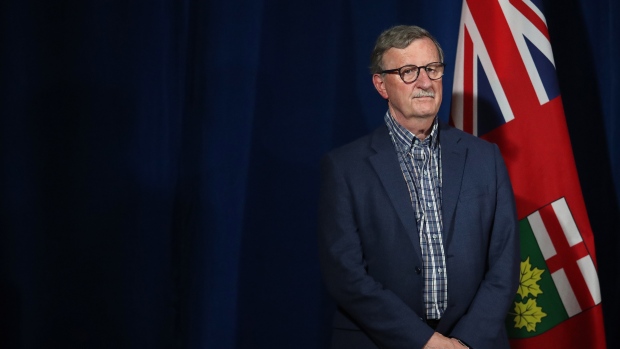 TORONTO —
Ontario’s top doctor has said the number of new COVID-19 cases reported daily should be “around or below 1,000” before the lockdown orders can be lifted.

Speaking at a news conference on Monday afternoon, the province’s Chief Medical Officer of Health Dr. David Williams said that officials would have to be able to guarantee hospital capacity could be protected before changing public health measures in Ontario.

“If you do that knowing the different numbers and per cents that usually get admitted to hospital and how many of those end up in the (intensive care unit) ICU you get a general sense that you have to get somewhere around or below 1,000 new cases a day,” he said.

“It was only a few months ago, the end of October that we were there, and we can get back there I believe.”

Williams added that the number of people being treated in Ontario intensive care units (ICU) for COVID-19 would also have to be reduced from 400 to about 150.

The province said that it becomes harder to support non-COVID-19 needs when the number of ICU patients with the novel coronavirus exceeds 150.

It becomes “impossible” to handle once it exceeds 350 people.

As of Monday, there are currently 1,571 patients in hospital with COVID-19. Of those, at least 394 patients are being treated in the ICU and 303 are breathing with the assistance of a ventilator.

Ontario Premier Doug Ford issued a province-wide lockdown on Dec. 26 that shuttered all non-essential businesses and prohibited in-person dining at bars and restaurants.

As the number of COVID-19 cases neared 4,000 a day in early January, Ford declared a state of emergency and issued a stay-at home order.

Under this order, residents are required to stay at home with the exception for essential reasons.