In 2008, NASA announced that a new exoplanet was found orbiting a star 25 light-years away. But now it seems to have vanished.

It turns out that it likely wasn’t a planet at all.

The initial observation of the potential exoplanet, named Fomalhaut b, was made in 2004 using the Hubble Space Telescope, with follow-up observations in 2006.

The host star, Fomalhaut, has long fascinated astronomers. The star is found in the southern constellation Piscis Austrinus and is surrounded by a cloud of dust. Images reveal it to look like the fictional Eye of Sauron in the movie The Lord of the Rings.

While most exoplanets are discovered through the transit method — when a star’s light dips ever so slightly as the planet crosses in front of it — this was directly observed by Hubble. And the dot appeared to be moving, thus supporting evidence of an exoplanet.

But additional observations by Hubble in 2014 revealed … nothing.

This exoplanet wasn’t making any sense at all.

“Fomalhaut b has always been a mystery,” Andras Gaspar, an astronomer at the University of Arizona and corresponding author of the new paper published in the journal Proceedings of the National Academy of Sciences, said in an email. “For starters, its colours were a bit off from what one would expect from a massive exoplanet.”

But stranger still, in Hubble’s initial images, the “planet” was bright in visible light but produced no heat signature in infrared light, as an object like this should. Some of the hypotheses for this was that there could be a ring of dust around Fomalhaut, or the planet was similar to Saturn and itself sported a massive ring.

Then Gaspar and corresponding author George Rieke looked through data and realized that Fomalhaut b wasn’t where it was supposed to be, which further piqued their curiosity.

Their paper concludes that instead of an exoplanet, what Hubble witnessed was a rare collision between two large, icy asteroids that produced fine dust particles.

Following recommendations from one of the reviewers of their paper, they went back and analyzed the object and noticed that it was expanding, further strengthening their case of an expanding cloud of dust.

Capturing something like this is rare. It just happened to be a case of Hubble looking in the right place at the right time. But it’s not without precedent, Gaspar said.

“Sometimes we do get lucky and see an unlikely event,” he said. “Humans have observed and noted quite a few supernovae going off over the last millenia; we have seen the Shoemaker-Levy 9 comet impact Jupiter; the massive Tunguska impact [in Siberia] in 1908 went undiscovered for years.”

Catching something of this magnitude is important for understanding how planets and star systems form.

“The Fomalhaut system is the ultimate test lab for all of our ideas about how exoplanets and star systems evolve,” Rieke, also from the University of Arizona, said in a statement. “We do have evidence of such collisions in other systems, but none of this magnitude has ever been observed. This is a blueprint for how planets destroy each other.”

Rieke and Gaspar have booked time for follow-up observations on the upcoming James Webb Space Telescope, set to launch in 2021.

“Witnessing such an event, as rare it is, is fascinating. The Earth-moon system formed in a massive collision (much more massive than this),” Gaspar said. “Collisions produce the asteroid fragments that impact Earth to this day and provide us with shooting stars to see at night, and large asteroids that movies have taught us to fear and that we are actively searching for.” 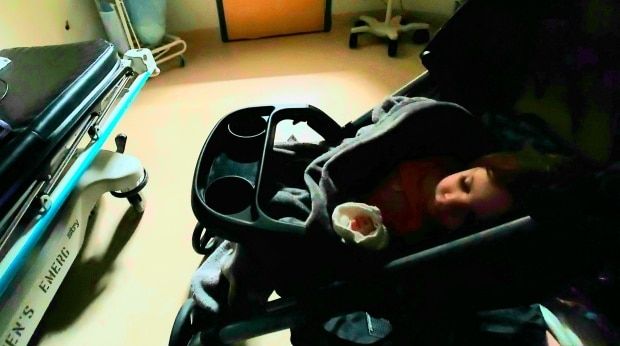 Doctors are investigating the case of a Winnipeg toddler with symptoms suggesting a rare, inflammatory illness potentially linked to COVID-19, the girl’s mother says.

The 21-month-old child is fighting to recover, even after she no longer tested positive for COVID-19.

The mother says health-care providers treating her daughter are concerned the girl may have developed Kawasaki disease, which is also known as multi-system inflammatory syndrome (MIS-C) in children.

Inflammatory syndromes can result from the body’s reaction to new viruses — not just the new coronavirus. But doctors in Canada, and scientists around the world, are investigating for a link to COVID-19.

Public health officials say no cases of the conditions connected with COVID-19 have been confirmed in Manitoba so far.

“Honestly, it’s just terrifying … Doctors don’t have the answers,” said the girl’s mother, who CBC is not naming due to concern about stigma.

The toddler’s parents didn’t know what to make of the her symptoms. She had a red, puffy rash, vomiting and diarrhea, a tender abdomen and a recurring fever that spiked to 38.9 C (102 F).

“She refused to eat, barely had anything to drink,” said her mother.

Pediatricians they contacted were cautious about sending the child to a hospital, and told the mother to try Tylenol, thinking the girl had a flu.

On April 28, two days after the girl’s symptoms arose, the family learned the husband has been exposed to a co-worker who later tested positive for COVID-19.

They went for testing immediately, and blood work confirmed the toddler had COVID-19, the mother said.

At that point, Manitoba had fewer than 25 active cases of the disease and was announcing plans for reopening.

“It was absolutely devastating,” the mother said. “How could it possibly be COVID … with the cases being so low?”

A provincial spokesperson said since Kawasaki disease isn’t required to be reported in Manitoba, officials can’t confirm investigations into the illness in Manitoba.

The spokesperson said Manitoba pediatric infectious disease experts are in constant communication with specialists in Ontario and Quebec.

Hospitals in Ontario, Quebec, B.C. and Alberta are examining possible cases of MIS-C. Experts say the illness is difficult to diagnose and cases remain ill defined.

“There are way more unknowns than knowns,” said Rae Yeung, a professor of pediatrics, immunology and medical sciences at the University of Toronto, and staff pediatrician and rheumatologist at the Hospital for Sick Children.

When she’s not sick, the child in Winnipeg is “very chatty. She’s energetic, running around,” said her mother.

COVID-19 sucked that energy away as the toddler mostly slept.

Eventually, “she was only awake approximately three hours in a 24-hour period,” her mother said.

After she tested positive, doctors admitted the toddler to the hospital for treatment and testing to rule out anything else that may have been making her sicker.

Initially, doctors hoped her body could fight off the disease on its own, her mother said. But the family has been in and out of the hospital for weeks as her condition remained serious.

Last week, the toddler’s health took a turn for the worse. But on May 28, tests showed she’s now negative for COVID-19 and is fighting a new medical battle.

Doctors then raised the possibility of MIS-C or Kawasaki, the mother said, and will now begin further tests to help understand exactly what is making her daughter so ill.

“You just kind of feel helpless because you can’t make [your children] feel better,” she said.

“You don’t want to see them sick, especially with something so serious as a pandemic. You just wish you could take their pain away.”

Yeung calls MIS-C “the syndrome with many different names,” because depending on where you are in the world, it might be called different things.

“I think this is part of the reason why it’s led to some confusion and a lot of anxiety, in fact, among not only families, but also caregivers and health-care professionals,” she said.

Much of what’s known about the disease remains hypothetical, she said, and research is needed to understand more. At its core, the syndrome can be characterized by inflammation, especially in blood vessels, caused by a hyperactivation of the immune system.

“What we’re seeing in all of these syndromes is hyper inflammation —  just an overactive immune system that’s gone into overdrive, affecting multiple organs in the body,” she said.

The illnesses in that family are triggered by a “tickle” to the immune system, Yeung said, starting with anything from strep throat to the novel coronavirus. Canada documents roughly 100 to 150 cases of Kawasaki disease a year, she said.

But epidemiology in Europe, the U.S. and Canada has suggested a pattern, as cases of inflammatory syndromes in children emerge roughly four to six weeks following the peak coronavirus outbreak in each population.

Many, even most, of the children diagnosed with these illnesses don’t initially test positive when swabbed for COVID-19, Yeung said, but blood work often shows the children had the disease previously.

It’s still not clear exactly how many cases of the inflammatory illness there are in Canada, Yeung said. She said at Toronto’s Hospital for Sick Children, they’re seeing roughly three to four times the volume of these illnesses over normal years.

Yeung is helping lead research, in partnership with the Canadian Paediatric Society and the Public Health Agency of Canada, with doctors across the country to determine where cases are and help understand them better.

“I think sharing knowledge and alerting the public is a very important component of this,” Yeung said.

The mother of the Winnipeg toddler said she wanted to share her story to spread information and urge caution from parents.

“It’s rare, but it’s serious,” the mother said. “If you’re in doubt, take your child to the hospital.”

SpaceX’s Crew Dragon spacecraft, perched atop the company’s Falcon 9 rocket, takes off from launch pad 39A at the Kennedy Space Center in Cape Canaveral, Florida, carrying NASA astronauts Robert Behnken and Douglas Hurley to the International Space Station. The May 30 launch was the first US rocket launch with a crew since the Space Shuttle program ended in 2011 and SpaceX’s first crewed mission ever. The mission is called Demo-2 since its primary purpose is to test out SpaceX’s spacecraft.

A huge near-Earth asteroid will pass our planet tonight at a safe distance of 3.2 million miles, according to NASA.

After a spate of doom-laden headlines the space agency felt the need yesterday to update a previous post about near-Earth asteroids with the following note:

“Asteroid 2002 NN4 will safely pass by the Earth on June 6 at a distance of approximately 3.2 million miles (5.1 million kilometers), about 13 times further away from the Earth than the Moon is. There is no danger the asteroid will hit the Earth.”

NASA Asteroid Watch then tweeted this image of the asteroid’s trajectory:

That’s over a dozen times bigger than the asteroid that exploded over Chelyabinsk, Russia, in 2013. That was the biggest meteor for over a century.

Would asteroid 2002 NN4 be dangerous if it hit Earth?

Yes—asteroid 2002 NN4 is city-killer size, but it’s not going to cause any harm to anyone.

No new coronavirus cases in Manitoba on Saturday – Globalnews.ca