There are a lot of things wrong with American culture—a complete disregard for other people, the miraculous ability to politicize every aspect of life, and ridiculous disbelief in science all come to mind—but the worst has got to be relentless fear-mongering.

Joe Biden won the 2020 US election, turning Donald Trump into a one-term president. I repeat, Biden won—there’s no doubt about it. But even after news outlets and officials have called the election in Biden’s favour, Trump has refused to concede, preferring to spew baseless rumours about voter fraud and fake news instead.

Trump’s refusal to concede the election is unfoundedand embarrassing. If there was ever any doubt that his Twitter account is home to nothing but damaging propaganda, these last couple weeks have proved it—his tweets are covered in Twitter warnings like “official sources called this election differently” and “this claim about election fraud is disputed.”

Trump’s relentless fear-mongering—about mail-in voting, about the media, and about the electoral system itself—hurts democracy. He used fear to encourage voter suppression and give himself a better chance at winning the presidency.

He even used a global pandemic to his advantage, attacking the Post Office to discourage people—mostly Democrats—from voting. Again, the media sources which rightly called the election for Biden are not spewing baseless propaganda—Trump is.

Trump is a symptom of a larger sickness in the US: an incredibly divided nation. The American identity has become so closely tied to which party you vote for—Republican or Democrat—that people are politically divided on every issue, even on something as simple as wearing a mask.

Trump tapped into this division, exploited it, and used it to get more votes. He was a president for the people who voted for him, and no one else.

As a dual Canadian-American citizen, I’m proud to have voted for Biden. His rhetoric largely supports the important message of reuniting the country. Biden is by no means perfect, but he will at least be a president for all Americans, not just the people who voted for him.

In Canada, we need to learn from the mistakes of our downstairs neighbours. Please, let’s not poke fun at the US to fan our egos and instead look at it as a warning of what happens when we start hating each other for no reason.

So, the Right needs to relax—we’re not living in 1984 yet. If we’re making steps toward it, it’s because of a divided populace, not a corrupt media.

Julia is a second-year English student and one of The Journal’s Assistant News Editors.

(Reuters) – Some damage to Sino-U.S. ties is “beyond repair” amid a new wave of Trump administration measures to counter China, Chinese state media warned, amid growing rancour underlined by an ugly Twitter spat between a U.S. senator and Chinese journalists.

Relations between the world’s two largest economies have sunk to their lowest point in decades over issues such as trade, technology, security, human rights and COVID-19.

In an editorial, the government-backed China Daily said it viewed as “worrisome signs” Washington’s decision to limit visitor visas for members of the Chinese Communist Party and their families and a ban on Xinjiang cotton imports.

“Even if the incoming administration has any intention of easing the tensions that have been sown, and continue being sown, some damage is simply beyond repair, as the sitting U.S. president intends,” the paper added.

Relations between the two countries are being shifted to “a dangerous path”, the editorial said.

China’s ambassador to the United States became the latest of the Asian nation’s senior officials to signal a desire to reset the increasingly confrontational relationship as President-elect Joe Biden prepares to take office in January.

“There are always differences between the two countries. None of them justifies confrontation and war, cold or hot,” Cui Tiankai said on Twitter.

“With sufficient mutual respect and mutual understanding, we are capable of managing these differences so that they would not derail the entire relationship,” he said on Thursday.

A person familiar with the matter also told Reuters U.S. prosecutors are discussing a deal with lawyers for Huawei chief financial officer Meng Wanzhou to resolve criminal charges against her and end her detention in Canada, which would bring an end to a major source of tension.

It is unclear whether a Biden administration would bring a dramatic shift, however.

The Democrat told the New York Times this week that he would not remove existing tariffs set by the Trump administration against China for now.

Legislation targeting China or Chinese officials over charges of human rights abuses in the western region of Xinjiang and crackdown against pro-democracy activists in Hong Kong have won broad bipartisan support in Congress, as well, further suggesting current policies towards China will stay.

Blackburn, a Republican and one of the more outspoken China critics, claimed without evidence on Twitter that China “has a 5,000 year history of cheating and stealing.”

In response, Chen accused Blackburn of being the most “racist and ignorant” U.S. senator he has seen and calling her a “lifetime bitch.”

Blackburn responded by calling Chen a “puppet” in Chinese President Xi Jinping’s “dream for global domination” and vowed that the U.S. would not bow to “sexist communist thugs.”

Hu Xijin, the editor-in-chief of China’s Global Times newspaper, also criticised Blackburn on Twitter on Friday, saying it was a pity her “cognitive level is still as low as a monkey’s.” 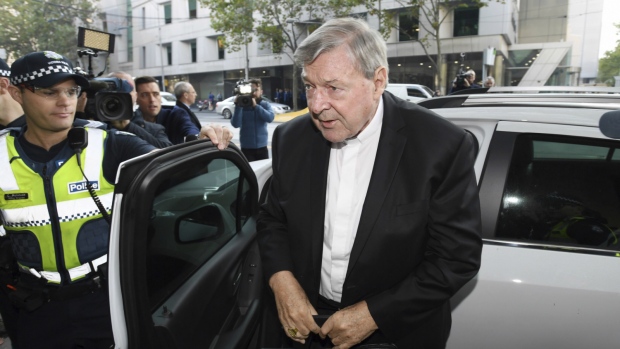 MELBOURNE, AUSTRALIA —
A Supreme Court judge in Australia’s Victoria state on Friday dismissed submissions from news media organizations and journalists that there is no case to answer on charges they breached a gag order on reporting about Cardinal George Pell’s sex abuse convictions in 2018.

More charges were tossed out in the case against Australian media outlets prosecuted over reporting of Pell’s abuse convictions. But the judge refused to throw out the bulk of the 87 charges of contempt of court for stories published after the cardinal’s guilty verdict.

His child sexual abuse convictions were overturned by Australia’s High Court earlier this year and the cardinal is back in Rome.

More than two dozen media organizations, reporters and editors were charged with breaching of suppression orders and other reporting rules in the days following the guilty verdicts.

But he rejected arguments by 27 media outlets, journalists and editors that they had no case to answer for the remaining 79 charges.

Prosecutors last month dropped 13 charges against News Corp. staff and publications. The trial is scheduled to resume on Jan. 28.

Such suppression orders are common in the Australian and British judicial systems. But the enormous international interest in an Australian criminal trial with global ramifications highlighted the difficulty in enforcing such orders in the digital age.

Pell was convicted on Dec. 11, 2018 of sexually abusing two choirboys in a Melbourne cathedral when he was the city’s archbishop in the late 1990s.

The trial of Pope Francis’ former finance minister and the most senior Catholic to be charged with child sex abuse was not reported in the news media because of the suppression order that forbade publication of details in any format that could be accessed from Australia.

Details were suppressed to prevent prejudicing jurors in a second child abuse trial that Pell was to face three months later.

That second trial was cancelled due to a lack of evidence, and Australia’s High Court in April overturned all convictions after Pell had spent 13 months in prison.

No foreign news organization has been charged with breaching the suppression order. The U.S. Constitution’s First Amendment would prevent such censorship in the United States, so attempting to extradite an American for breaching an Australian suppression order would be futile.

TOKYO (Reuters) – Japan’s prime minister, Yoshihide Suga, is set to hold a news conference to provide an update on the country’s pandemic response on Friday, his first since coronavirus case numbers surged in November.

Suga is expected to explain his backing of a widely criticised travel subsidy campaign meant to help revive the economy amid infection controls.

In recent weeks, a third wave of the coronavirus has arrived in parts of the country, and some medical groups and experts blame it on a government campaign to encourage domestic tourism.

His news conference will take place at 6 p.m. local time (0900 GMT), according to the Prime Minister’s Office.

Suga’s approval ratings have dipped, with many unhappy with his handling of the pandemic, polls showed. That could deal a blow to his plan to prop up local economies and may threaten the chances of his premiership beyond next autumn.

The government has paused its “Go To Travel” campaign in two cities, but Suga said on Thursday the travel subsidy programme would be extended beyond the original end date of January 2021.

“We need to support the tourism industry, which is indispensable for the local economy,” Suga told a tourism strategy meeting.

The world’s third-largest economy rebounded in the third quarter from a pandemic-induced slump, thanks to surging consumption and exports, but some analysts worry about slowing growth ahead because of the resurgence in infections.

He was widely seen as Abe’s right-hand man during his tenure and has defended him in parliament.

Tokyo prosecutors are considering a summary indictment of two officials in Abe’s office over alleged violations of a funding law, the daily Asahi reported on Friday.