DeBianchi Real Estate’s Sam DeBianchi discusses mortgage rates and shares her outlook for the housing market into next year.

Real estate has proved to be a “tricky” market to navigate, but one industry expert argues mortgage rates trending downward at the close of 2022 will be the “game changer” heading into 2023.

“One thing that I really will say that’s the game changer in real estate are mortgage rates,” DeBianchi Real Estate’s Sam DeBianchi, who starred on Million Dollar Listing Miami’s only season, said on “Mornings with Maria” Tuesday.

“The higher these rates are, the more people want in a home. So they want the new home. They want the home with all the bells and whistles. They don’t want the fixer-uppers, and they want to have everything built into that mortgage.”

The U.S. Census Bureau reported a 5.8% increase in new home sales in November, and DeBianchi says this may only increase in 2023 as the current mortgage rates prompt buyers to look for new homes rather than renting or purchasing fixer-uppers.

“Rates have really transformed the buying landscape because now buyers don’t want the fixer-upper, they don’t want to come out of pocket. They’re saying, ‘well, if I’m going to have to pay 6%, then I want everything to that.’ And that’s really the focus.” 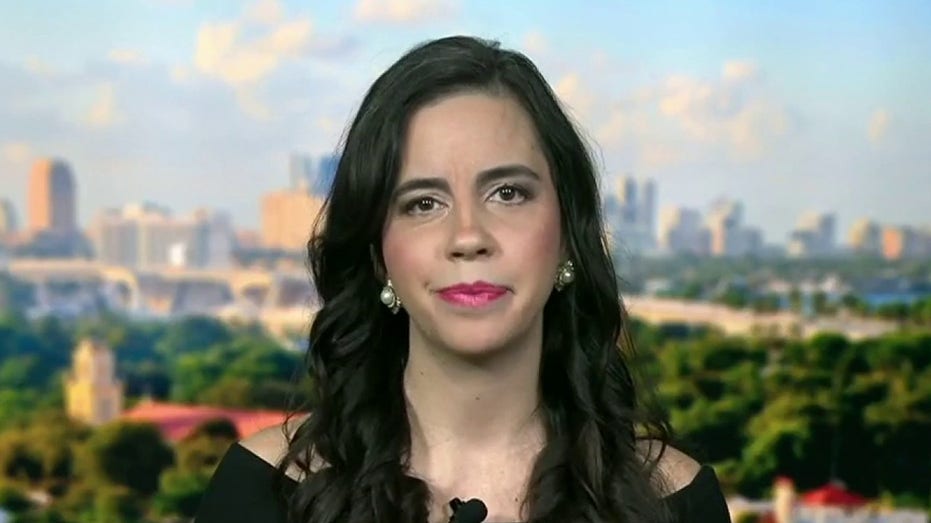 “As the Federal Reserve continues to move interest rates higher, mortgage financing continues to be a headwind for home prices,” Craig J. Lazzara, Managing Director at S&P DJI, said in the report. “Given the continuing prospects for a challenging macroeconomic environment, prices may well continue to weaken.”

DeBianchi echoed this analysis, arguing that while home prices may see a decrease, mortgage rates are still a bigger factor for buyers.

“It’s predicted next year that the median price point will be 385,800 for an existing home, not a new home, but an existing home. And obviously, as rates go up, it’s really putting a lot of people on the sidelines.”

Despite the recent drop in rates over the past six weeks, year-over-year mortgage rates have seen a dramatic increase over the past year. Last week the 30-year fixed rate averaged 6.27%, down from 6.31% the week prior, but more than double the rate of the 2021 30-year FRM at 3.05%.

FOX Business host Charles Payne reacts to the government digging into the economy on ‘Making Money.’

DeBianchi explained many buyers are opting to purchase a house to reap the benefits and look to refinance in the future, but low inventory remains an issue.

“It’s supply and demand; inventory is so tight. So there’s still not a lot out there to really pull these prices down.”

“What I am seeing are [sic] that buyers are saying, ‘you know what? There’s not a lot of inventory out there. Rents are still very much sky-high. So I’m going to go ahead and buy this house now.'” 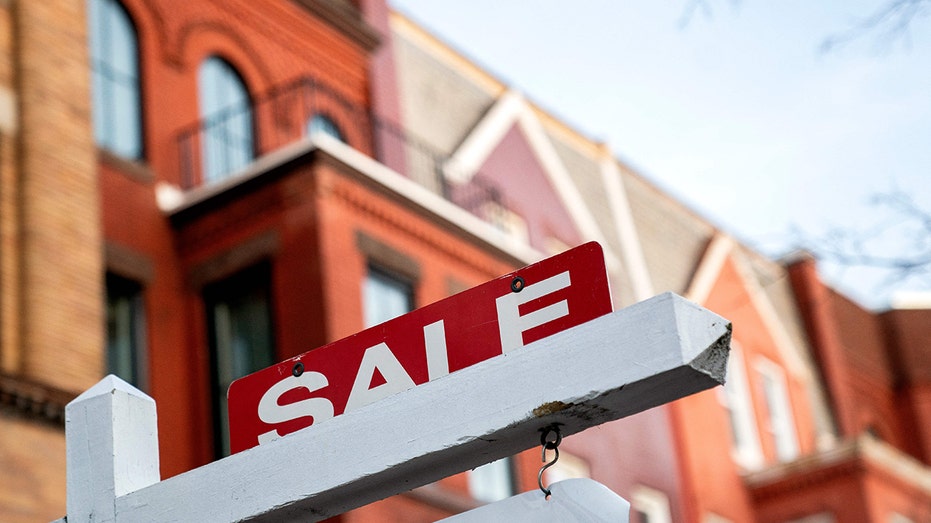 A For Sale sign is displayed in front of a house in Washington, DC, on March 14, 2022. (STEFANI REYNOLDS/AFP via Getty Images / Getty Images)

Debianchi referred to many homeowners as being “over-leveraged,” which she explained will eventually cause more properties and homes to hit the market and dramatically expand the inventory for buyers.

“So there’s money to be made. Don’t get greedy. But I do think that there are quite a few over-leveraged people and we’re going to see those properties hit the market. Is it going to be a crash? No, but at least we’ll have that many more homes and opportunities for people to buy.”

While the end of 2022 saw a significant increase in the purchases of new homes, there was a drop-off of 7.7% in November for existing home sales.

“It’s a tricky market. I think that with rates coming down, that’s going to be the game changer.”

The 5 most breathtaking new buildings unveiled for Toronto in 2022

The owners of one half of a Vancouver duplex who are being sued by the owners of the other half of the property deny a claim that they scuttled a $1.8-million real estate sale following a “toxic” dispute over common property.

Late last year, Maria and Panagiotis Pappas, who own a home at 3257 West 2nd Ave., filed a lawsuit against their neighbours, Jordan Mark Bower and Maureen Culver Elworthy, who own 3255 West 2nd Ave., the other half of the duplex.

The plaintiffs said that they had been living with their neighbours for more than a year with no discussion of legal or property issues until January 2021.

A dispute arose when Bower and Elworthy proposed what the plaintiffs are calling a “complete” redrawing of all common property space on the ground-floor outdoor areas of the home.

The plaintiffs say they consider the proposals to be completely one-sided and beneficial to the defendants.

As a result, say the plaintiffs, they offered to simply sell their property and move to allow Bower and Elworthy to negotiate with new owners as to any changes of common property.

They say that after putting their home up for sale, they received an offer on Oct. 8 for $1.85 million.

The offer was partly contingent on the buyers receiving confirmation from the defendants that a civil resolution tribunal case that had been filed against the plaintiffs would be, or already was, discontinued, says the plaintiff’s lawsuit.

The plaintiffs alleged that Bower and Elworthy displayed a “confrontational” attitude with the buyers, and as a result, the sale collapsed.

But in a response to the lawsuit, the defendants say that the proceedings concern what they consider to be the plaintiffs’ unauthorized use of common property in violation of the bylaws of the strata corporation.

The two properties are collectively a strata corporation, although the corporation has never complied with strata laws and there have never been annual general meetings. There is no budget or council meetings, according to the plaintiffs’ lawsuit.

Bower and Elworthy say in their response that the first discussion of property issues occurred in April 2019 when they tried to perform a home inspection.

They say they attempted to negotiate with the plaintiffs to find an amicable solution to the issues, but were ultimately unsuccessful and as a result commenced proceedings in the civil resolution tribunal.

Bower and Elworthy deny that the plaintiffs were selling their home in a bid to get away from them and were instead selling it for financial reasons.

They deny that they were unreasonable or confrontational with the prospective buyer, or that they caused the offer to be withdrawn or the contract to collapse.

The defendants say it was their desire that the contract between the prospective buyer and the plaintiffs be completed.

“In furtherance of that desire, the defendants spent many hours communicating with the prospective buyer and obtained legal advice to assist with reaching a solution so that the bylaw violation could be addressed and the (civil tribunal) claim withdrawn.”

Ottawa Valley real estate ends on a high in a dismal year – Ottawa.CityNews.ca 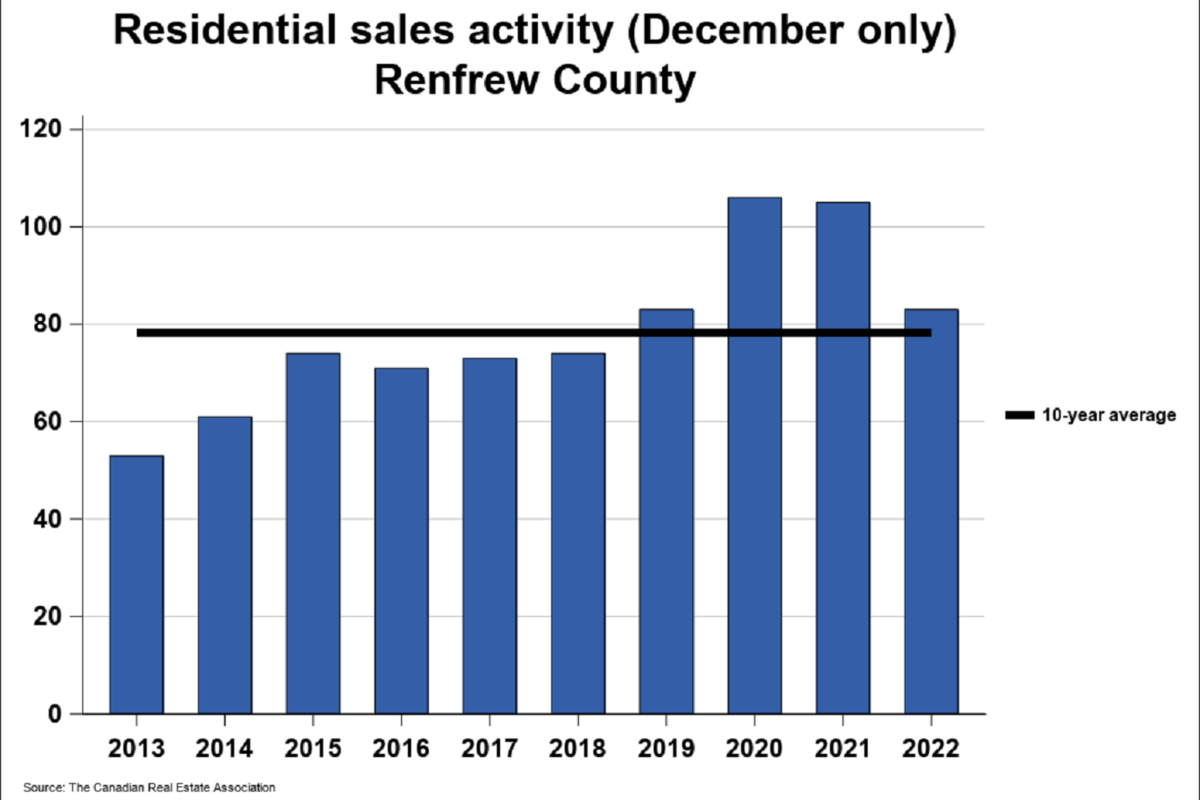 The 2022 real estate year in the Ottawa Valley ended with a little bump in what can best be described as a year to forget if you are a realtor or an individual searching for that perfect home at a reasonably affordable price.

The number of homes sold through the MLS® System of the Renfrew County Real Estate Board totalled 83 units in December 2022. This was a substantial decline of 21 percent from December 2021 but still came in around average levels for this time of year.

The year started off slow and never really gained any momentum during the 12 months, a trend that the rest of Canada was mired in for the first eight months of the year.

In its final report of the year, the Canadian Real Estate Association (CREA) reported the national slower than usual real estate sales in the first half of the year was caused by a number of factors.

“In 2022, we saw one of the biggest single-year shifts on record in Canadian housing activity, from record highs last winter to just below the 10-year average to end the year,” said Jill Oudil, chair of CREA. “That said, the market’s adjustment to higher rates may be mostly in the rear-view mirror at this point. That could start to bring buyers back off the sidelines this spring.

Leading the way for the slump in sales was the uncertainty of the Canadian mortgage rates and the pattern of following the American bank rate that was drastically increased over the latter part of the year.

The Federal Reserve waged a war on inflation throughout 2022 and as a result the interest rate set by the Fed increased by a whopping 4.25 per cent during the 12 months. The high rate of inflation, the war in Ukraine, shortages of materials in the global supply chain all contributed to the massive increases.

In Canada, the Bank of Canada often followed suit. In October the cost of borrowing to purchase a home was determined by the national rate which sat at 1.75 percent. By December 2022, it was 4.25 per cent.

In Renfrew County, home sales were eight percent below the five-year average and six percent above the 10-year average for the month of December. On an annual basis home sales totalled 1,652 units over the course of 2022. This was a significant decrease of 25.9 percent from the same period in 2021.

Lydia Tár Is Not an Art Monster – Vulture