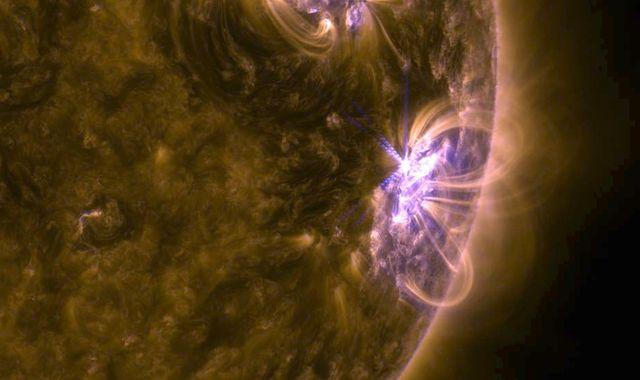 A massive solar flare is due to hit Earth today, authorities are warning – potentially disrupting power grids and bringing the Northern Lights as far south as New York.

The flare – officially known as a coronal mass ejection (CME) – was observed on Saturday on the side of the sun directly facing our planet and comes as we enter a period of increased solar activity.

An alert was published by the US National Oceanic and Atmospheric Administration (NOAA) which warned the geomagnetic storm could cause power grid fluctuations with voltage alarms at higher latitudes, where the Earth is more exposed.

NOAA added that satellites may be impacted too and could exhibit “orientation irregularities” meaning ground control would have to redirect them, as well as anything in low-Earth orbit experiencing increased drag.

Watch: NASA plans two missions to Venus to find out why Earth is ‘currently habitable’ when other planets near us are not

The geomagnetic storm could reach category G2, which is moderately strong according to the agency.

“Event analysis and model output suggest CME arrival around midday on 11 Oct, with lingering effects persisting into 12 Oct,” it added, with midday in the US meaning late afternoon and early evening in the UK.

The Met Office said: “Aurora is possible through [the] 11th across much of Scotland, although cloud amounts are increasing, meaning sightings are unlikely. There is a slight chance of aurora reaching the far north of England and Northern Ireland tonight, but cloud breaks and therefore sightings are more likely in Northern Ireland.”

But astronomers do not expect the flare to cause major disruption as per the Carrington Event, believed to be the largest solar storm ever recorded, which hit Earth in 1859.

The Carrington Event left an aurora visible across the sky, even in latitudes much closer to the equator, and was described in contemporary reports as even brighter than the light of a full moon.

It caused the failure of telegraph systems all across Europe and North America, and a similar storm today could cause trillions of dollars in damage globally.

Solar activity has been observed rising and falling naturally every 11 years, although not quite like clockwork, and astronomers believe we are now in the early years of a new busy period.

A new family of sunspots, discovered on the surface of our star last year, unleashed the biggest solar flare that scientists have seen since 2017.

There are a number of classes of solar flares, with X-class being considered the most intense. Saturday’s CME was a M-class event, the second strongest behind X.

It is known as a “Halo CME”, as flares that are heading directly for Earth can be observed as a halo around the sun.

Researchers in Utah find evidence of earliest human tobacco use 12,300 years ago – Globalnews.ca

Canada: Woman has a close shave as meteorite crashes through roof, lands on her pillow – Republic World

Overwhelmed, sad, guilty are some of the emotions young people say they feel when they think of  Climate Change and their concerns world leaders will fail to tackle it.

Broadly referred to as climate anxiety, research has stacked up to measure its prevalence ahead of the U.N. talks in Glasgow, which begin at the end of the month to thrash out how to put the 2015 Paris Agreement on curbing climate change into effect.

One of the biggest studies to date, funded by Avaaz, an online campaign network, and led by Britain’s University of Bath, surveyed 10,000 young people aged 16-25 years in 10 countries. It published its results in September.

It found around three quarters of those surveyed considered the future frightening, while a lack of action by governments and industry left 45% experiencing climate anxiety and distress that affected their daily lives and functioning.

Elouise Mayall, an ecology student at Britain’s University of East Anglia and member of the UK Youth Climate Coalition, told Reuters she had felt guilty and overwhelmed.

“What I’d be left with is maybe the sense of shame, like, ‘how dare you still want lovely things when the world is ending and you don’t even know if you’re going to have a safe world to grow old in’.”

She spoke of conflicting emotions.

Caroline Hickman, a psychotherapist and lecturer at the University of Bath and one of the co-authors of the research published in September, is working to help young people manage climate-related emotions.

“They’re growing up with the grief and the fear and the anxiety about the future,” she told Reuters.

London-based psychiatrist Alastair Santhouse sees climate change, as well as COVID-19, as potentially adding to the burden, especially for those pre-disposed to  anxiety .

For now, climate anxiety alone does not normally require psychiatric help. Painful as it is, it can be positive, provided it does not get out of control.

“Some anxiety about climate change is motivating. It’s just a question of how much anxiety is motivating and how much is unacceptable,” said Santhouse, author of a book that tackles how health services struggle to cope with complex mental issues.

“The worry is that as climate change sets in, there will be a more clear cut mental health impact,” he added.

Among some of the world’s communities that are already the most vulnerable, extreme weather events can also cause problems such as post traumatic stress disorder.

“It’s a quite natural response, because, as you see, as the world is today, that no one seems to care about what’s happening, I think it’s only human to feel that way,” she said.

For now, however, she is hopeful because she is doing everything she possibly can.

“When you take action, you also get a sense of meaning that something is happening. If you want to get rid of that anxiety, you can take action against it,” she said.

The test was intended to validate aspects of one of the Pentagon’s hypersonic glide vehicles in development, two of the people said.

Hypersonic glide vehicles are launched from a rocket in the upper atmosphere before gliding to a target at speeds of more than five times the speed of sound, or about 3,853 miles (6,200 kilometers) per hour.

In a separate series of tests conducted on Wednesday, the U.S. Navy and Army tested hypersonic weapon component prototypes. That test successfully “demonstrated advanced hypersonic technologies, capabilities, and prototype systems in a realistic operating environment,” the Pentagon said in a statement.

The United States and its global rivals have quickened their pace to build hypersonic weapons – the next generation of arms that rob adversaries of reaction time and traditional defeat mechanisms.

Companies such as Lockheed Martin and Raytheon Technologies are working to develop the hypersonic weapon capability for the United States.

(Reporting by Mike Stone and Idrees Ali in Washington; Editing by Sandra Maler)

(Reuters) – A vast trove of fossils unearthed in Argentina’s southern Patagonia region is offering the oldest-known evidence that some dinosaurs thrived in a complex and well-organized herd structure, with adults caring for the young and sharing a communal nesting ground.

Scientists said on Thursday the fossils include more than 100 dinosaur eggs and the bones of about 80 juveniles and adults of a Jurassic Period plant-eating species called Mussaurus patagonicus, including 20 remarkably complete skeletons. The animals experienced a mass-death event, probably caused by a drought, and their bodies were subsequently buried by wind-blown dust, the researchers said.

“It is a pretty dramatic scene from 193 million years ago that was frozen in time,” said paleontologist Diego Pol of the Egidio Feruglio Paleontological Museum in Trelew, Argentina, who led the research published in the journal Scientific Reports.

Mussaurus, which grew to about 20 feet (6 meters) long and about 1.5 tons, possessed a long neck and tail, with a small head. It was bipedal as an adult but newborns were quadrupedal. Mussaurus lived early in the Jurassic, the second of three periods comprising the age of dinosaurs. It was a relatively large beast for its time – much bigger than contemporaneous meat-eating dinosaurs. Dinosaurs became true giants later in the Jurassic.

“The site is one of a kind,” Pol said. “It preserves a dinosaur nesting ground including delicate and tiny dinosaur skeletons as well as eggs with embryos inside. The specimens we have found showed that herd behavior was present in long-necked dinosaurs since their early history. These were social animals, and we think this may be an important factor to explain their success.”

The animals were found to have been grouped by age at the time of their deaths, with hatchlings and eggs in one area while skeletons of juveniles were clustered nearby. The eggs were arranged in layers within trenches. Adults were found alone or in pairs.

This phenomenon, called “age segregation,” signals a complex social structure, the researchers said, including adults that foraged for meals and cared for the young. The researchers suspect that members of the herd returned to the same spot during successive seasons to form breeding colonies.

“The young were staying with the adults at least until they reached adulthood. It could be that they stayed in the same herd after reaching adulthood, but we don’t have information to corroborate that hypothesis,” said paleontologist and study co-author Vincent Fernandez of the Natural History Museum in London.

Herd behavior also can protect young and vulnerable individuals from attack by predators.

“It’s a strategy for the survival of a species,” Fernandez said.

The oldest previous evidence for dinosaur herd behavior was from about 150 million years ago.

The nesting ground was situated on the dry margins of a lake featuring ferns and conifers in a warm but seasonal climate. The eggs are about the size of a chicken’s, and the skeleton of a hatchling fits in the palm of a human hand. The adults got as heavy as a hippo.

A scanning method called high-resolution X-ray computed tomography confirmed that the embryos inside the eggs indeed were of Mussaurus.

Mussaurus was a type of dinosaur called a sauropodomorph, which represented the first great success story among herbivorous dinosaurs. Sauropodomorphs were an evolutionary forerunner to a group called sauropods known for long necks and tails and four pillar-like legs.

The largest land animals in Earth’s history were the sauropod successors of sauropodomorphs, as exemplified by a later denizen of Patagonia called Argentinosaurus that reached perhaps 118 feet (36 meters) in length and upwards of 70 tons.

(Reporting by Will Dunham in Washington, Editing by Rosalba O’Brien)