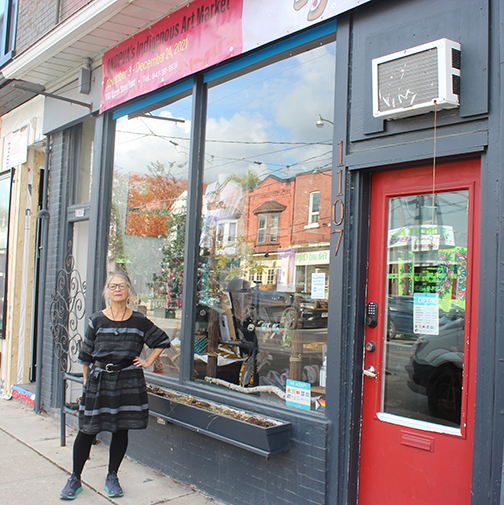 Barb Nahwegahbow is one of the organizers of the Association for Native Development in the Performing and Visual Arts (ANDPVA) Indigenous Art Market in Leslieville. Photo by Alan Shackleton.

The Association for Native Development in the Performing and Visual Arts (ANDPVA) is opening Toronto’s first-ever Indigenous Art Market with a grand opening event slated for Saturday, Nov. 6.

The market will be located in Leslieville at 1107 Queen St. E. and the grand opening will include dancing, drumming, and Indigenous food starting at 11 a.m.

Jingle Dress Dancer Nicole Leveck and her two girls Indiana and Nazarene will be present at the grand opening event to dance in gratitude and celebration.

“They represent several different Indigenous nations and are gifted in working in several mediums. While diverse, they all share a commitment to excellence, pride in their Indigenous heritage and enthusiasm about sharing their culture through their art,” ANDPVA stated in a press release.

Because of the pandemic, the livelihoods of Indigenous artists were impacted by the cancellation of Pow Wows and other events where they have the opportunity to sell their work, said the release.

“This is a dream come true. ANDPVA has long wanted a superb showcase in Toronto for our artists. As storytellers and knowledge keepers, our artists are vital to the preservation and sharing of our culture,” said Millie Knapp, Executive Director of ANDPVA in the press release.

Did you enjoy this article? If so, you may consider becoming a Voluntary Subscriber to the Beach Metro Community News and help us continue providing the community with more local content such as this. For over 40 years, our staff have worked hard to be the eyes and ears in your community, inform you of upcoming events, and let you know what and who’s making a difference. We cover the big stories as well as the little things that often matter the most. CLICK HERE to support Beach Metro News.

The outside has come inside at the Mann Art Gallery, with simultaneous displays from several artists who draw their inspiration from nature albeit in different ways.

For Ken Van Rees, it was walking through a burnt patch of forest near South End (Reindeer Lake) that caused him to wonder what he could do with charcoal and canvas.

“As I was walking through the forest, I looked down at my pants, they were light-coloured, and there were all these charcoal markings on them,” said Van Rees during a reception held by the gallery on Nov. 26. “I thought, oh, maybe I could do something with this and this started this long journey of creating art from burnt forest.”

Van Rees allows the forest, wind and time to do some of the work for him. He puts a canvas down in a chosen spot, puts a burned log on top and then comes back days, weeks or months later to see what has happened.

He has also set up a game camera and was interested to see the wildlife that stopped and took a sniff or walked on the canvas.

Where most people avoid burned areas of nature and look for lush, green landscape, the fiery side of nature has a more visual appeal for him.

“Most of us prefer a green forest. That’s what we like to go camping in or hiking in. For me, because I worked on forest fires when I was a teenager and I had that first experience with forest fires, it somehow resonated with me,” he said.

Van Rees’ art can be found at the Mann Art Gallery until January 15 and is an accompaniment to the work of well known artist Greg Hardy.

In contrast to the more muted colours in Van Rees’ work, Hardy’s in some cases has bursts of orange and other bright colours.

“This is a show of drawings from the La Ronge area, where I have a cabin up on an island,” said Hardy.

About four years ago, Hardy was talking to the then director of the Mann gallery and agreed to a showing of his drawings.

With changes in staff at the gallery and the pandemic, it took time for the exhibition to come together, but it is now displayed.

Some of the drawings were done decades ago and some are more recent but the focus on the natural world is shared with Van Rees.

“I have an affinity for the natural world and I paint a lot of things, but I always come back to its landscape that moves me the most as subject matter,” said Hardy.

Hardy’s career has been established for some time and he makes it his full time occupation, sharing his time between La Ronge and his main studio near Saskatoon.

“Realistically, this is a small sampling of the drawings that I have because I draw all the time,” Hardy explained.  “It’s primarily the landscape,” he said of his decision to work in northern Saskatchewan. “We used to go up further north and do a lot of canoe trips and it had always been a dream or a hope to have a wilderness cabin at some point.”

An architect from Prince Albert had the cabin available for sale and so Hardy was able to buy it.

“As soon as I saw it, I was just like this is amazing,” he said. “The subject matter was all around and I knew it was going to be very positive.”

Hardy paints or draws where ever he is, and mainly draws inspiration from the plains before focusing on the forest.

“This was like a 15 year concentration on Lac La Ronge and it still feels like a positive source of inspiration,” he said. “But having said that, I’m shifting gears and going to go back to the plains.”

He looks for good quality light when he paints and also looks for energy.

“The more dramatic the landscape the better. I feel more in tune with what’s going on if there’s a storm or a pending storm,” Hardy explained.

“And I’ve always been taken with the sky, since I was a little kid.”

A third display is up at the gallery for the duration of the exhibition featuring Hardy along with Van Rees.

Title ‘The Secret is in the Paper’, the collection was curated by collections assistant Breanne Bandur and is focused on different approaches to the treatment of paper.

A new exhibition featuring photographs of the late Princess Diana will be on display in three U.S. cities starting in December.

“Princess Diana Exhibition: Accredited Access” gives a candid view of Diana through the eyes of Anwar Hussein, the longest-serving British royal photographer, and his two sons Zak and Samir Hussein, also photographers. Anwar Hussein took photos of Diana from when she became a public figure until her death in 1997.

“You get to walk through and see a proper journey of how Diana progressed throughout her life from being just a shy, innocent girl to then moving on to being a fashion icon and a humanitarian,” said Zak Hussein, promoting the exhibition in Santa Monica, California.

Visitors are given a phone and headphones so they can read and hear commentary about the significance of each image.

“You get to hear from myself and my brother the stories behind the pictures,” said Zak. “It’s not your regular exhibition of just looking at pictures on the wall … It’s got that more documentary feel about it.”

“Beforehand, it was quite normal for the royals to wear gloves when touching members of the public and it’s something that Diana didn’t do. She wanted to really feel the person and that emotions come across through touch,” said Zak.

Anwar Hussein is widely credited with conveying a more candid view of the royals. Zak said his father excelled at capturing authentic glimpses of the subject’s personality, and advised him to do the same.

“People like to see more candid, more relaxed images of the royals and it’s something that again you can see in this exhibition,” Zak said.

The exhibition by the Husseins goes on display in Los Angeles, Chicago and New York from Dec. 1.

Aberdeen Art Gallery has been named Scotland’s building of the year following its recent £36.4m redevelopment.

The Royal Incorporation of Architects in Scotland (RIAS) announced that the gallery had won the 2021 Andrew Doolan Best Building in Scotland Award on 30 November.

Aberdeen City Council’s flagship cultural venue was designed by Hoskins Architects. The redevelopment, which was completed in late 2019, involved refurbishing and extending the 19th-century building.

Chris Coleman-Smith, director at Hoskins Architects, said: “The team has done an exceptional job of subtly and sensitively restoring original features of the 19th-century building and improving fabric performance, alongside confident alteration and the bold addition of new elements that enhance the visitor experience, knitting together a thread of careful conservation and the requirements of a world class, 21st-century gallery.”

The annual Doolan Award is assessed by an expert jury who look at each project’s architectural integrity, usability and context, delivery and execution, and sustainability. All types of building are eligible for the award, which is named in memory of its founder and patron, the architect/developer Andy Doolan, who died in 2004. The architects of the winning building receive a £10,000.

RIAS president Christina Gaiger PRIAS said: “Aberdeen Art Gallery is an outstanding building and a highly deserving winner of the 2021 Doolan Award. Hoskins Architects have brought a piece of Scottish heritage into the 21st century with humility, skill and sensitivity.

“In the face of the climate emergency, how we upgrade, respect and adapt our existing building stock is absolutely crucial. In Aberdeen Art Gallery we have an outstanding example of how a public building, thanks to the talent of Hoskins Architects and far-sighted clients Aberdeen City Council, exemplifies the smart re-use of an existing building, as part of a collective regenerative response to climate change.”

The redevelopment of the gallery was supported by Aberdeen City Council, which provided £14.6m, and the National Lottery Heritage Fund, which contributed £10m. Energy company BP donated £1m to the project.

Which upcoming phones will use the Qualcomm Snapdragon 8 Gen 1? – TechRadar

A Taliban ban on women in the workforce can cost economy $1bn – Aljazeera.com