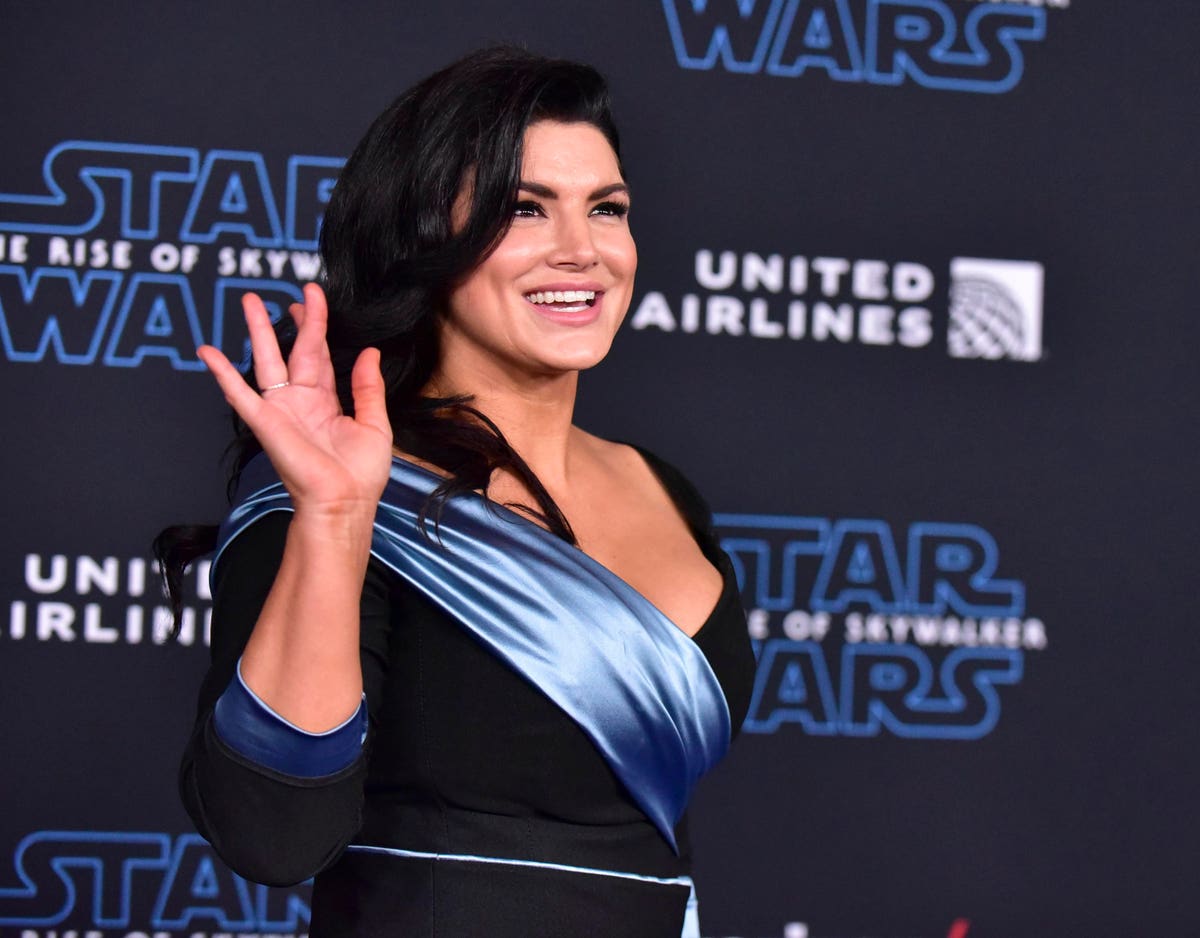 On Tuesday, actress Gina Carano announced that Disney has removed all the press she did for season two of the hit Disney+ series The Mandalorian after she refused to apologize for comments she posted on social media. Carano, who had played the breakout character Cara Dune and who was almost as popular as “Baby Yoda,” was released from the series earlier this month.

Lucasfilm, which is the production house behind the series, said in a statement Carano was no longer employed by the company and would not be seen in upcoming seasons of The Mandalorian or other projects in the future. Because she had refused to apologize, Lucasfilm has pulled the press she did for the series.

The former MMA fighter and model has been largely unapologetic for comments she has made across social media regarding her belief that there was widespread voter fraud in the 2020 election, as well as her stance on the wearing of masks during the Covid-19 pandemic.

For months there had been a strong movement on social media that called for Carano’s firing, and it was last week that Lucasfilm and its parent company Disney finally responded. It isn’t just her appearance in press events that is being deleted from history, toy giant Hasbro announced that it has scrapped plans to make any further Cara Dune action figures.

Retailers have had to cancel preorders of the latest figures, which had reportedly been quite high.

“The ‘Star Wars’ Black [Series] Cara Dune figure was released in 2020 and sold out not long after the inventory was received,” a spokeswoman for BigBadToyStore told The Hollywood Reporter in a Monday email. “Hasbro planned for another production run and we were accepting preorders from that production run. Due to recent events, Hasbro was no longer approved to produce any more of this figure.”

While the first run of figures will likely soon become collector’s items, due to the backlash on social media it appears that some retailers seemed eager to sell existing stock faster than a jump to light speed. Retail giant Walmart had Cara Dune figures with accessories discounted to just $2 from a list price of $19.87 on Tuesday afternoon.

Reaction From Fans And Supporters

Since Carano was fired, there has been a steady stream of supporters. Sen. Ted Cruz (R-Texas) was among those who defended the actress’s right to free speech and personal opinions, while UFC President Dana White also issued his support.

Many of her fans have continued to stand behind her, and a Change.org petition was even started that called for her to be rehired.

The petition, “Disney: Rehire Gina Carano” had more than 43,000 signatures as of Tuesday afternoon, just shy of its goal to get 50,000.

Logan Norfleet, who started the petition, wrote “I’m not going to say she was right or wrong with her views, but firing celebrities over their political views has been happening way too often, and once again, Hollywood has struck down another conservative. What she said may have been a little extreme, and I can even see why some people may have been offended, but her tweet was not made to incite violence or to express discrimination or hatred of any sort to any particular group.”

The actress has been largely quiet on social media since her firing, but many have still used Twitter and other platforms to show support.

A few have continued to call her out, however. Among those was the official account from struggling video game retailer GameStop (@GameStop), which tweeted, “Opinion: Save the First Amendment pearl clutching. Gina Carano was fired from The Mandalorian for the same reason most people get fired: she was a bad employee”


This is the first time a cabinet minister has so clearly spelt out concerns about all Chinese-owned social media platforms, which combined have millions of Canadian users

OTTAWA – Canadians should be wary of using Chinese social media platforms because information posted there may be used for “hostile activities” by foreign states, says the federal public safety minister.

If you regularly post on Chinese social media platforms such as WeChat, Weibo or even TikTok, the Canadian government has a stern warning for you: be careful, because hostile countries may be watching in an attempt to use that data against Canada’s interests.

During a meeting of the parliamentary committee on Canada-China relations Thursday evening, Liberal MP Jean Yip asked Public Safety Minister Bill Blair if Canadians should be concerned about using social media platforms that are owned by Chinese companies.

“There is a legitimate concern that sometimes the information that’s publicly available on those platforms can be used by the hostile activities of state actors,” Blair responded, adding that Canadians should exercise “caution” on those applications.

This is the first time a cabinet minister has so clearly spelt out concerns about all Chinese-owned social media platforms, which combined have millions of users in Canada.

Many data and privacy experts have warned over the years that these apps harvest large amounts of data from their users (not unlike North American companies like Facebook or Google). But there is an added concern with platforms like WeChat due to the sweeping powers the Chinese government has to seize data from companies based on its soil.

Earlier in January, the Winnipeg Free Press revealed that the Canadian Armed Forces (CAF) have resisted joining TikTok — an app that allows users to post short videos and “duet” those of others which has exploded in popularity among North American youth — because it considers the app to pose “huge security risks”.

This came months after the U.S. government announced it was banning TikTok and WeChat, originally a messaging and calling app that now offers a host of other services, due to national security concerns.

At the time, the Trump administration said it was concerned that Beijing was exploiting the apps and the troves of data they collect in order to gather information about users and spread Chinese propaganda.

The owners of both applications at the time, respectively ByteDance and Tencent Holdings, gave assurances that the Chinese government did not have access to its user data and that in TikTok’s case, it was never even hosted in China.

In his opening statement, Blair repeatedly warned of China’s increasing attempts of foreign interference in Canada, as well as its role in the current opioid crisis. But he dodged questions by opposition MPs on whether his government would ban Chinese telecommunications giant Huawei from Canada’s 5G network.

“While foreign interference is top of mind for my portfolio, it is by no means the only issue on the plate. It’s no secret that China is one of the main source countries of fentanyl, as well as the precursor chemicals used to make this highly potent and deadly synthetic opioids,” Blair said.

“Over the past four years, the Canada Border Services Agency has made 335 seizures totalling over 42.2 kilograms, and of these seizures, 129 listed China as the source country of those drugs.”

Opposition MPs also grilled Blair about a report by the Globe & Mail that Canada had outsourced handling of its visa application centre in the Chinese capital to a company that is owned by Beijing police.

The minister was unable to say which government officials had awarded the original contract to VFS Global, which then dealt with Chinese police-owned Beijing Shuangxiong Foreign Service Co, because he said it was done in 2008, before his government came to power.

When pressed multiple times on if he had concerns about the contract, Blair repeated that he’d been assured no data had been taken from Canadian files.

“Immigration, Refugees and Citizenship Canada has an IT department that provided assurances that all our information is in fact secure. There has been no suggestion of espionage or any concern raised, only the fact that a Chinese official entity was involved in this company,” Blair said.

“So your government is totally satisfied with this arrangement and satisfied that it should continue in perpetuity?” NDP MP Jack Harris asked.

The minister responded without saying if the contract with the Beijing police-owned company would continue indefinitely.

“I’m satisfied that IRCC has not identified any concerns and they have provided strong assurances that Canadian data and Canadian interests are well protected in the system they have in place,” he said.

SYDNEY — Facebook Inc on Friday said it had signed letters of intent with three Australian media firms, a day after the country’s Parliament passed a law forcing it to pay media companies for using content on its platform.

Facebook said it had signed partnership agreements with Private Media, which owns online magazines, Schwartz Media and Solstice Media. Commercial agreements will become effective within 60 days if a full deal is signed.

“These agreements will bring a new slate of premium journalism, including some previously paywalled content, to Facebook,” the social media company said in a statement.

It did not disclose the financial details of the deal.

Facebook on Tuesday struck a similar agreement with Seven West Media, which owns a free-to-air television network and the main metropolitian newspaper in the city of Perth.

Australia on Thursday became the first nation to pass a law where a government arbitrator can set the price Alphabet Inc’s Google and Facebook pay domestic media for using their content if private talks fail.

Facebook blocked all news content in Australia a week ago, citing concerns with the rules, but on Thursday restored all news feeds after reaching an agreement with the government.

For months Facebook and Google threatened to pull core services from Australia if the law took effect, but Google struck some deals with publishers in the days before the vote.

Japan to end state of emergency for six prefectures this month: media – TheChronicleHerald.ca

TOKYO (Reuters) – The Japanese government will end a state of emergency in all but Tokyo and three neighbouring prefectures at the end of this month, a week earlier than scheduled, public broadcaster NHK reported on Friday.

The government had placed 11 of Japan’s 47 prefectures under a state of emergency in January as a third wave of the COVID-19 pandemic swept the nation. One of those prefectures, Tochigi, had already emerged early from the government-designated emergency state.

Coronavirus infections have declined significantly across the country since peaking in early January, including in the capital, Tokyo, and the government is hoping to lift the state of emergency in the remaining four prefectures as planned on March 7, NHK said.

Under the latest measures, Japan has asked bars and restaurants to close by 8 p.m. and companies to strive for more telecommuting. It has also suspended a popular “Go To Travel” subsidised tourism programme.